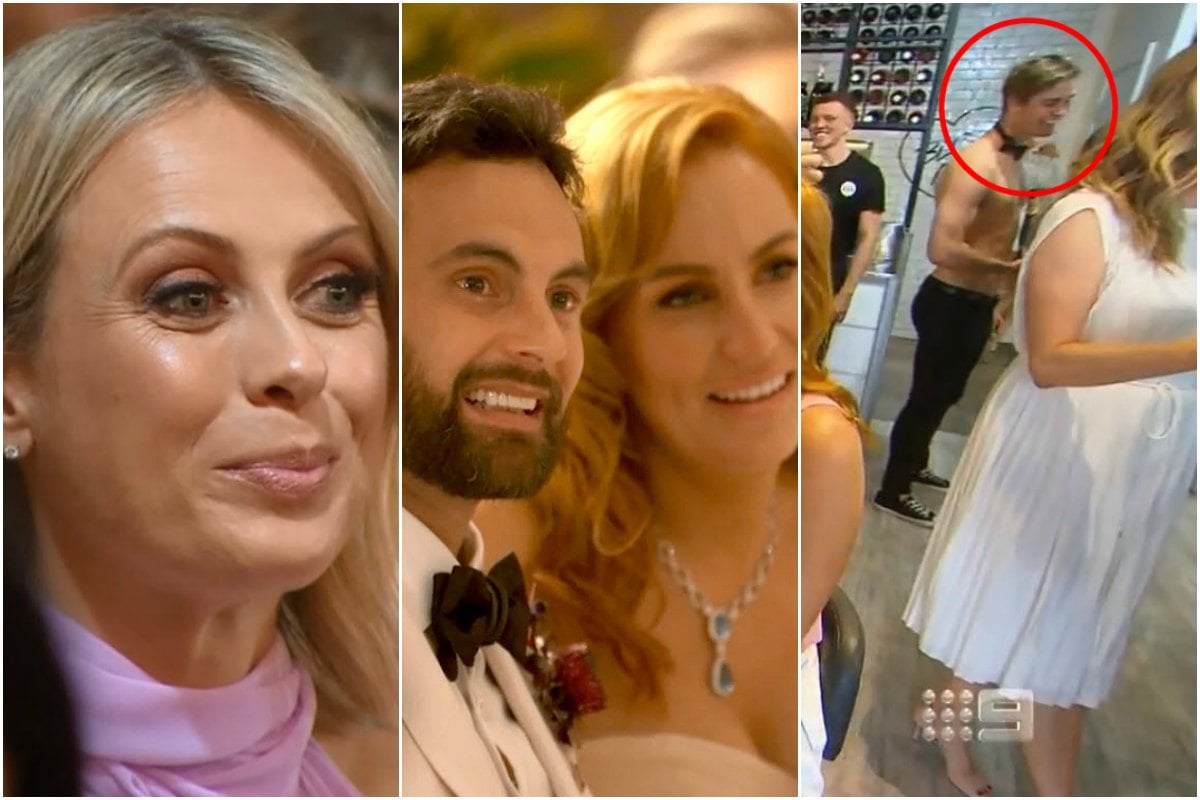 The wedding of the year has come and gone.

They were the success story from this year’s season of Married at First Sight, and now Jules Robinson and Cam Merchant are officially married, but like… for real this time.

To be clear, their actual wedding happened last Sunday, November 17, however not a lick of content has been posted on anyone’s social media account because #exclusivity.

Instead, we as a nation had the honour of watching the holy union of two people we became weirdly personally invested in. All it took was one season of reality TV and some very manipulative editing.

However, their nuptials didn’t come without controversy. Not Cyrell-throwing-a-fruit-bowl-at-Martha levels of drama, but still enough. Former MAFS bride, Mel Lucarelli was supposed to be Jules’ bridesmaid before she was unceremoniously dumped via text, and, according to the Daily Mail, the couple have also been accused by wedding vendors of asking for “freebies,” in exchange for social media and television coverage.

But back to the wedding.

Thanks to A Current Affair, we got to watch the lead-up and the wedding day itself, and we all cared about it a lot more than what we should have.

Despite this, we have questions.

Seven of them to be precise…

1. Was it really appropriate to call Cam and Jules the Romeo and Juliet of Married at First Sight?

Just a reminder of how that little story ended.

2. Were the 2000 hand-peeled roses really necessary?

While touring their wedding venue, there's a moment where Sylvia Jeffries takes a look at their flower garland type thing and says: "Do I spot a hand-peeled rose?"

Now one: Sylvia Jeffries, you did not 'just spot' a 'hand-peeled rose', it was most definitely written into the script. And two: details are great and all, but this seems like a lot of work??

They did look pretty damn good though.

3. Do wedding dances always need a theme or only when they're being broadcasted on national television?

When we follow Jules and Cam to their wedding dance lessons, we learn their first dance as husband and wife will be 'themed'. Yes, really.

Speaking to the camera, Sir Overeager Choreographer (Josh) said he wanted to replay "the time they both first met, and the way they first met".

"They met through first sight really, and now we're here a year later."

And that's a lot for two amateur dancers to portray.

Alas, Cam was pretty enthusiastic about the whole ordeal.

4. Did Billy make a cameo as a topless waiter at Jules' hens???

Okay, so on closer inspection, no. That topless waiter was not Billy Vincent of the catastrophic Billy and Susie pairing from last season of MAFS - and we smell a missed opportunity.

Dedicated viewers of the show will remember the bombshell moment when it was revealed the Byron Bay surfer once posed in a naked calendar called 'Manscapes' by photographer John Bortolin.

While Jules' hens party would have been an ideal moment to revitalise his career, maybe it just wasn't meant to be.

Fake Billy aside, we were also introduced to MAFS villain Mike Gunner's doppelganger at Cam's bucks party, and for a moment we were real confused.

Maybe they [Channel 9 producers] didn't think we would notice?

It doesn't matter if he's playing cricket at his bucks, getting ready for dance lessons, or seconds away from getting married, Cam might be the most wholesome person on this planet.

In fact, Cam's immense cheeriness is only matched by the consistent immaculate shininess of Jules' hair. It's unfathomable.

6. So, exactly what happened with Jules and Mel?

Surprise, surprise, we didn't really get an explanation. When asked about 'the drama' Jules chose to instead side-step the question.

"In response to that question, all that matters are that my nearest and dearest are here right now," she said.

Sharing the other side of the story, Mel confirmed the 'dumping' rumours on her Instagram, posting a photo of herself and Jules.

"Yes, the rumours are true. Yes, Jules dumped me as a bridesmaid. No, I wasn’t at the wedding event of the year," she wrote in the caption.

Her post garnered a lot of support from her former fellow MAFS brides, with Tamara, Ning, Jessika, and Elizabeth leaving comments on her photo.

"I love you babyyy," commented Tamara.

As expected, Jessika was a bit more overt in her message.

"Beautiful girl, don’t let it effect you. And this isn’t the wedding of the year! Dwayne Johnson and Lauren Hashian wedding was the wedding of the year. I’m sure Lauren would have more elegance and grace than to dump one of her “close” girlfriends by a text message. Fame....it’ll do ugly things to you and it’s unfortunate," she wrote.

"I never get invited to heaps of things babe, no sweat over here. You can come to my wedding? Oh wait a minute... I need a man, all the monies and the tv crew whoops I’m screwed," she wrote.

7. Why did Cyrell not get her own piece to camera???

It was the moment we were all waiting for. Not the big reveal of Jules' dress (which was stunning, as expected), but the bit where we saw which of Jules and Cam's former MAFS stars were invited to their wedding.

In a blink and miss it moment, we saw that along with Heidi, Cyrell was also in attendance. Unfortunately, she only got one very short and courteous piece to camera. No threats were issued and no glass objects were smashed. That we saw of.

As it turns out, Nic and Cyrell were actually sat together at the reception and much to the dismay of the A Current Affair producer who orchestrated this, they did not get into a fight.

As for the other missing MAFS stars, could they not organise an appearance fee or...?

I’m waiting for the Cam and Jules reality show, surely that coming to 9 in 2020 #9ACA #MAFS

Did you watch Cam and Jules' wedding on A Current Affair? Tell us in a comment below.