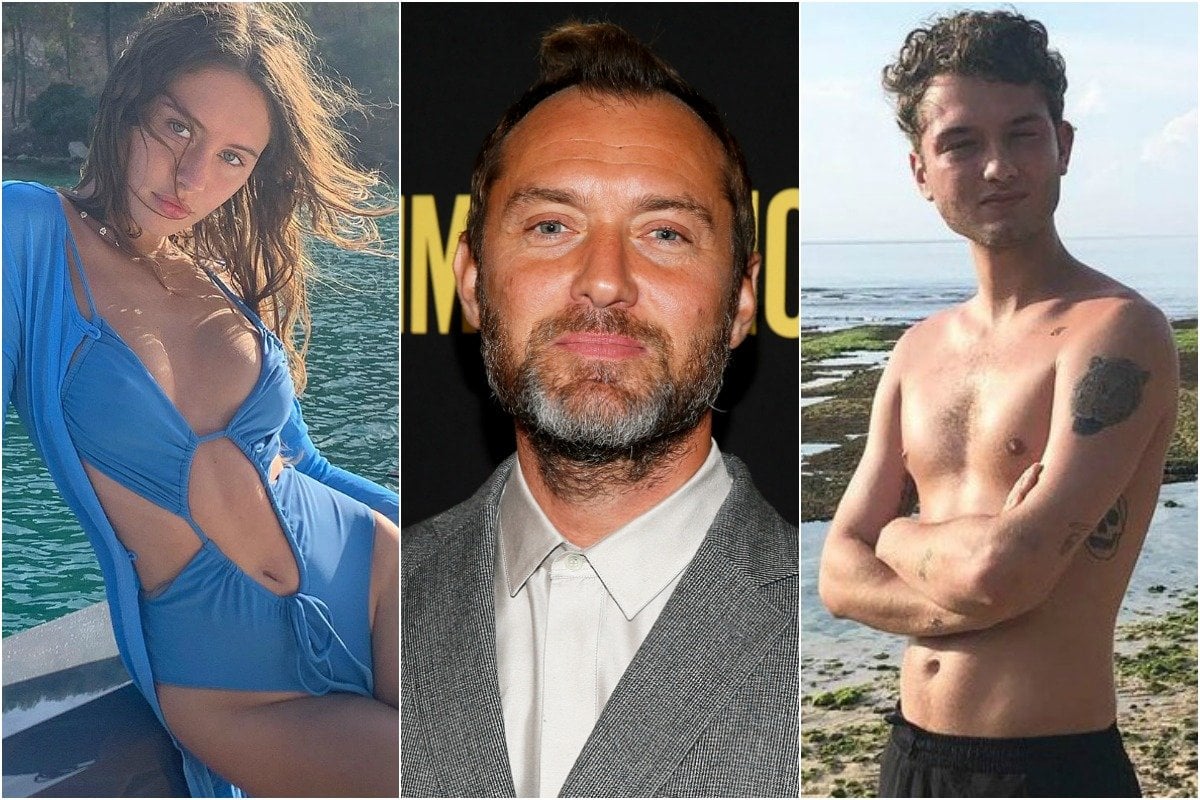 Jude Law has been on our screens since he was 20.

Over the years, we’ve seen the British actor in everything from The Talented Mr Ripley, Cold Mountain, The Holiday, Sherlock Holmes, Contagion and Fantastic Beasts, just to name a few.

Here’s the trailer for Jude Law’s The Last Pope. Post continues after video.

The now 47-year-old has more than 70 roles in his arsenal, across a more than 26-year career, and he has cemented himself over the decades as a ‘heartthrob’ on screen.

But before we get to that, here's a little look back at Law's past loves.

As a young man, Jude fell in love with married mum-of-one Sadie Frost on the set of Shopping, and she subsequently walked away from her nine-year marriage.

"The force of the love I felt for Jude and his intense ambition made me feel out of control," she admitted in her 2010 autobiography, Crazy Days.

Rafferty Law was born in 1996, a year before his parents married.

Now 24, the eldest Law has followed in his father's footsteps as a model and an actor, most notably scoring the lead role in the remake of Oliver Twist.

Rafferty, or Raff as he prefers, spoke to The Evening Standard about growing up amongst his parents high profile divorce in 2003, after six years of marriage.

Rafferty lives in south London with a friend, after moving out of his mum’s house in Primrose Hill two years ago. He was dating singer Rita Ora, but the couple broke up in early 2020. He's now reportedly seeing Brookyln Beckham's ex girlfriend, model Hana Cross.

The next Law sibling, Iris, is 19 and a successful model with more than 200,000 followers on social media.

In 2017, Iris was made the face of Burberry Beauty, and in 2018 she told The Evening Standard she was leaning towards fashion and jewellery design as a career.

This year Iris uploaded a photo of herself in an intricate blue bikini photo, which she designed and sewed herself.

"Eeeeep. I designed and sewed this bikini the day before I came away do u like it? Do u want it ?" she asked in the caption.

Iris first hit headlines when she was two, after she bit into an ecstasy pill she found on the floor at a children’s party at Soho House. As The Telegraph reported, her distressed mother saw her chewing on it and raced her to the hospital to have her stomach pumped.

Rudy, 18, is the youngest of Jude and Sadie's children born in 2002. In 2013, the then nine-year-old starred in the short film Dotty alongside his mother.

The Daily Mail reported festival director, Leoni Kibbey's opinion of the film as, "Rudy’s performance is brave and exciting and it’s super clear he’s following in his parents’ footsteps. He has the Jude twinkle in his eye and looks as if he enjoyed his role".

Rudy, like his older brother and sister, has also dabbled in modelling, winning a contract with Dolce & Gabbana among others.

In 2018, his parents were seen reuniting via his sister's Instagram for his 16th birthday. Their divorce when the children were still young was reported as being quite messy.

"The bitterness between them is so strong it is very hard to be friends with both," a source told The Mirror in 2003.

Sadie told the Mail in 2010 "depression weaved a dance of destruction through my adult life," and cited it as being one of the primary reasons behind their breakup.

In January 2020, Sadie posted a throwback photo of the couple when they were a "young crazy couple in love" on Instagram.

"Two decades later and now our beautiful kids are all grown up and thankfully smarter than we were," she mused.

Love that instagram sometimes finds old pictures that were lost forever..so happy i found this! I love this image of me and my childrens dad .. think he was the same age as @rafflaw is now in this .. we were living in Chamberlain street with @zoegraceartist and @steve__mackey and little @mackeymarley had just been born.. @rafflaw was on the way. and @fin_munro was 6! @lirisaw and rudy were waiting in the wings...???????? We were just a young crazy couple in love who didn’t know what was going on!! And how to navigate the chaos that was round the corner.....but 2 decades later and now our beautiful kids are all grown up & thankfully smarter than we were. It all makes sense ???????? There was a photo and a painting of this image and i cant tell which this is.? And who to credit.. The painting was huge and amazing - but somewhere along the line it got stolen ????...so happy to find someone posted this on insta- also the photo was displayed at The National Portrait gallery for a while.. . ❤️#90s #beautulcolors #serene. #lifelessons. Anyone know if its josie Jammatt?

A year after his divorce, Jude starred in Alfie, where he met fellow actor Sienna Miller. The pair got engaged on Christmas Day 2004.

But a few months later, Jude had an affair with his children's nanny.

In a tell-all newspaper interview, Daisy Wright detailed her liaisons with Jude, which she says occurred over two months while the then 32-year-old actor was shooting the upcoming drama All the King’s Men in New Orleans.

“He is a great lover and knows how to satisfy a woman. We couldn’t get enough of each other," she told the Sunday Mirror.

Jude released a public apology to his then-fiancé in the same paper, and they worked on their relationship for more than a year, before eventually calling it quits in 2006.

At the end of that same year, Jude's career success was back making headlines as he starred in his first romantic comedy, The Holiday, alongside Cameron Diaz, Kate Winslet and Jack Black.

It was then that Jude embarked on his 'bachelor years', which led to two more children to different mothers.

Sophia was born to American model Samantha Burke in 2009, when they had a brief fling after meeting on the set of Sherlock Holmes. The same year Sienna and Jude reportedly briefly rekindled before splitting up again.

When Samantha found out she was pregnant, according to numerous reports, she kept it to herself for a while before asking Jude for a paternity test. “I knew our relationship would not continue,” Samantha revealed in a 2009 interview. “And I was okay with that.”

When Sophia was five-weeks-old, her mum gave an interview to Hello! magazine and was asked if Jude had met their daughter yet, to which she replied, "There are no plans for it to happen at the moment, but I know he's busy".

Hollywood Life reports Jude financially supports his daughter, paying $6,000 a month in child support, as well as schooling and medical fees, until Sophia turns 18. Star Magazine reported in 2016 he sees her once a year.

The couple were briefly together, but by the time their child was born, they'd gone their separate ways.

Months after Ada's arrival, Catherine told The Mirror, "He [Jude] is a good dad and she sees her brothers and sisters. He takes her out all the time. [Ada] looks like Jude massively, she doesn't look like me".

The now five-year-old looks remarkably like her half-sister Sophia, and according to social media, the pair live in Surrey in south-east England.

By the time Ada was born, Jude had met his new wife, behavioural psychologist Phillipa Coan (but was dating another woman, Rachel Bourlier).

After being introduced to Phillipa in early 2015, Jude put his bachelor behaviour behind him - well, after he broke up with Rachel who claimed to have been dating him for "some time" and who discovered he was dating Phillipa through media reports.

Reflecting on his past relationships in 2016, Law said he regretted some of his past actions.

"I regret hurting people. It’s an awful thing. And trying to gain the forgiveness or the understanding of someone you’ve hurt, or heal a pain you may have inflicted, that’s where regret hits hard," he said, according to The Mirror.

Since then, Phillipa and Jude have kept their relationship very private - especially in comparison to his high-profile Hollywood relationships of the past - but Jude has spoken of his love for Phillipa on US TV show Modern Living.

"I'm very, very happy. Our relationship is a very private thing, and I think part of the fact it works so well is exactly because of that," he said.

They married in a small ceremony in London in May 2019, attended only by their closest friends and family, and this year welcomed their first child together.

Neither of them shared any pregnancy news until Law announced the arrival of his sixth child on The Tonight Show with Jimmy Fallon in September 2020.

We are yet to find out a name or gender.

"It's really wonderful," he shared. "We feel pretty blessed that we were in a time where we could, as a family, just nest and enjoy each other's company and every day as it came."

"It was an unusual but kind of enforced love-in," he added when discussing having a baby during the COVID-19 pandemic.

Jude is currently starring in the drama miniseries The Third Day. He has also been in talks to appear as Captain Hook in the live-action remake of Peter Pan.