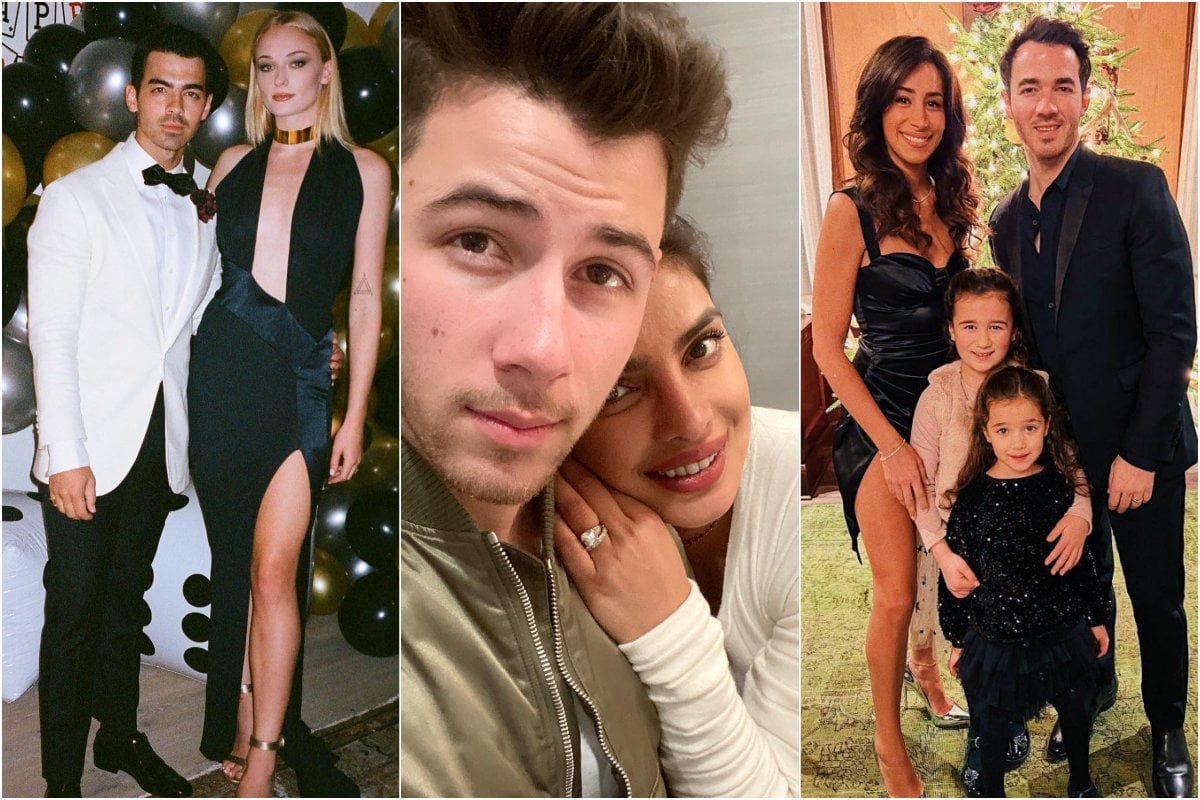 On Saturday, Nick Jonas announced that he and his wife Priyanka Chopra have secretly welcomed their first child together via surrogate.

"We respectfully ask for privacy during this special time as we focus on our family. Thank you so much."

With this exciting news, Nick Jonas has joined his older brothers, Kevin, 34, and Joe, 32, as a dad.

Here's a look into the Jonas Brothers' family lives.

Kevin Jonas was the first of the three brothers to settle down and start a family. He married Danielle Deleasa (now-Jonas) in December 2009 after they met on an island vacation.

The then-newlyweds went on to star in two seasons of their own reality TV series, Married to Jonas, before welcoming two daughters.

"Love of my life forever and always. Happy 12 years," the musician captioned an Instagram post to celebrate the milestone.

In addition to sharing plenty of sweet family snaps on social media, Kevin's daughters have also attended a handful of Jonas Brothers concerts since the band reunited in February 2019.

The family of four reside in New Jersey, and their daughters are now seven and five.

Joe Jonas and his wife actress Sophie Turner became parents when they welcomed their daughter Willa in July 2020.

The pair eloped the year before in Las Vegas, then hosted a second, lavish wedding in the South of France.

While the two have not posted any photos of Willa on social media, they have shared pregnancy snaps of the Game of Thrones actress and some sweet anecdotes about family life in interviews.

"It's been amazing," Joe said about becoming a father during the pandemic during an appearance on CBS This Morning in May 2021.

"It’s been forced time at home [amid the COVID-19 lockdown]. I’m always on the go, I’m always moving and travelling and touring. And to be in one place for a solid amount of time and [have] my feet on the ground and be with my family, my immediate family, is time I don’t think I’ll get back."

Their family is based in Los Angeles.

Nick Jonas has most recently become a dad, announcing the arrival of his first child with Priyanka Chopra this week.

The couple welcomed their baby (who they haven't announced the gender or name of just yet) via surrogate.

In 2018, Jonas and Chopra tied the knot and celebrated their nuptials with three wedding receptions, two of which took place in Mumbai, India, and one that was in New Delhi, India.

Shortly after the wedding, Nick Jonas spoke about wanting to become a dad.

"I think that's a real dream, and I think I've had to grow up pretty quick. With that, you could look at it two ways," he said on The Rewind with Guy Raz.

"They're a big part of our desire for the future. By God's grace, when it happens, it happens," she said this month.

Little did we know, they were already expecting!