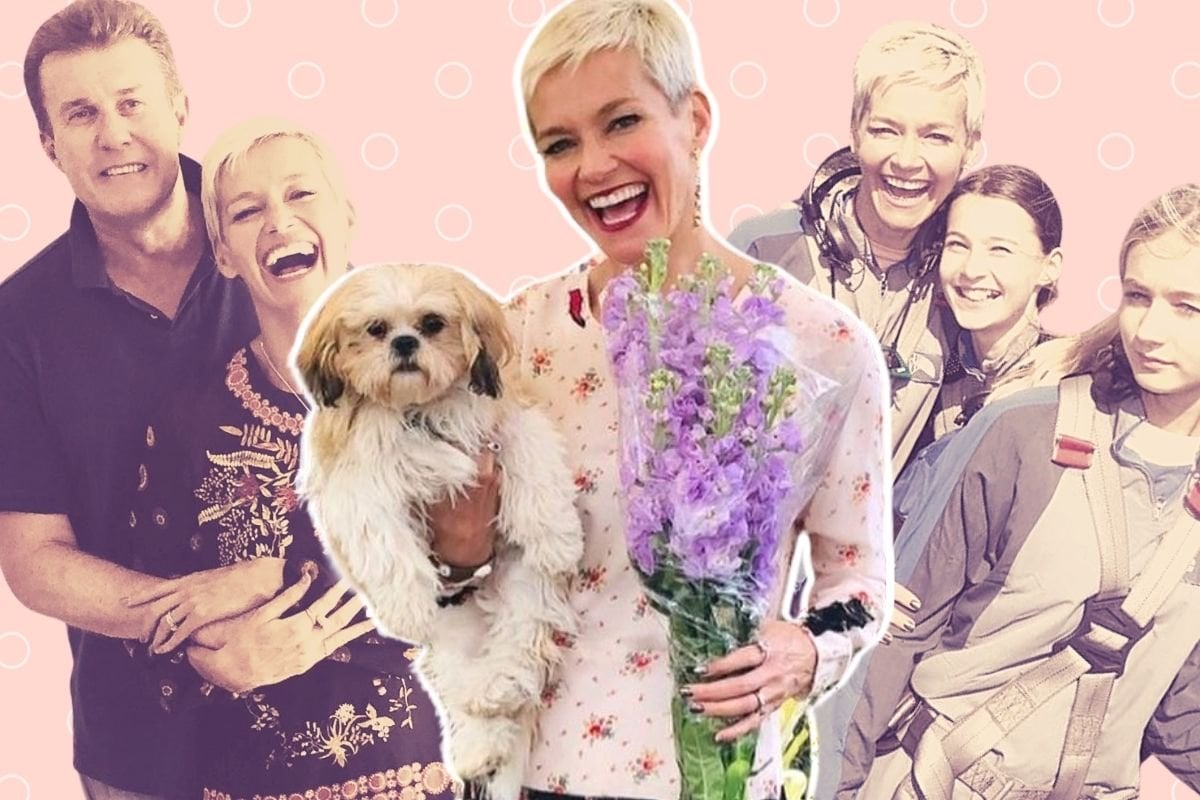 You'll never see journalist, TV presenter, and author, Jessica Rowe, grinning under a headline that reads "fabulous at 50" or "feisty at 50."

She refuses to fit into the cliched trope that tries to package women up into a neat little box. She spent too many decades doing that.

But since turning 50 in June this year, Rowe has realised she's shed all of those 'protective' layers she spent so many years building up. The ones that made sure she spent her 20s and 30s trying to be the perfect career woman, the perfect mum, the perfect partner and the perfect best friend.

She's not perfect, and more importantly, she no longer wants to be. But it's taken this long for her to truly, wholly, accept that.

Here's everything Jessica Rowe thinks you need to learn before you turn 50:

As Rowe tells Mamamia, there comes a time when you realise that it's the "zig-zagging of life" that makes it worth living.

Fitting into the aforementioned boxes, and spending your life just ticking off the goals that society sets for you, is not only unrealistic, it's also unsustainable for any length of time.

"I wasn't in touch with who I really was I because I thought I had to be perfect," Rowe tells Mamamia.

"I was very career-driven as a younger woman and had very particular goals in mind that I would work towards reaching. But of course, you discover over time that isn't real life. And I've had plenty of setbacks along the way.

"Now as a 50-year-old I do what I want to do and there's an incredible freedom in that."

2. Let go of the expectation you have to 'jump up the career ladder'.

According to Rowe, the expectation you have when you're younger of spending your career 'jumping up the ladder' is complete nonsense.

"[The reality is] you kind of meander all over the place, and that's fantastic," she says. "Because that's, I think, where the true magic lies in that meandering," Rowe says.

"Why is [climbing the ladder] how we measure success? Because that's what has changed for me, is how I measure success. And for me success is what makes my heart sing. What brings me joy. Versus the traditional idea that to be successful you need to have reached a certain job title. That's crap. It's absolute crap, and life doesn't work out like that," she adds.

3. Be okay with making risky decisions.

One of the things Rowe has loved about getting older is the confidence she's gained in being able to make big, risky decisions her younger self would have balked at. Like leaving the best job she'd ever landed - co-hosting Studio 10 - in March 2019.

"I'm far more confident, because I know I'm gonna be okay," she said. "What's the worst thing that could happen? You change your mind? Or it doesn't work out? Well... you try something else!" she says.

"It's the best job I've ever had in television. But I got to a point after five years where I thought, I'm not happy anymore. And I have a choice here about being happy.

"As women, I think we have very good intuition. That's often a bit of a superpower of ours. But we don't play to it enough because we think we've got to be logical and rational. But I got to a point where I needed to make a change. And yes, change is scary. But I haven't looked back. I am far happier now."

Especially in 2020, Rowe has taken away the unrealistic pressure of "being happy" as a daily or constant goal.

"I don't think it's a matter of saying 'I'm going to be happy' and 'choosing to be happy' because that's not realistic. It's more, I think, about the silver linings, and also about contentment and that sense of saying 'I am enough.' I don't need this job title, or for my children to behave this way or that way to be happy... I'm actually enough the way I am."

She's also realised those 'silver linings' don't have to be anything huge or momentous either.

"We've got this gorgeous new doggie called Daphne, and I love taking her for a walk around our block. And at the end of our street, there are these magpies in the tree. And I read recently that magpies can recognise 100 faces. And I wouldn't have in the past had the time to even read that, but now I go, 'Hi, magpies, do you recognise me?' And you see that brings me joy. So it's that. That sense of narrowing things as opposed to thinking it's got to be that 'big picture' that therefore makes you happy," Rowe says.

5. Things will unfold. They really do.

When Rowe was 30 years old she was single and miserable, thinking she was 'failing' at life because she wasn't engaged or having a baby like she thought she was supposed to be doing at that age. She didn't even have a boyfriend.

"But then a few years later, I met Petee [Channel Nine journalist Peter Overton], and we got married, and had a family and you know, all those sorts of things do unfold when they're meant to," she says.

"I used to hate it when people would say that to me when I was sick of waiting for it to unfold. But it does unfold. It really does. And that's why these arbitrary ages of when things are supposed to happen aren't true and it truly doesn't matter."

16 years ago today since I made the best decision of my life- marrying you my darling Petee! 👩‍❤️‍👨Thank you for always having my back, embracing my quirky ways and being my partner in life! ❤️😘#16years #happyanniversary #lovemypetee #luckywife #happylife #craphousewife #love

6. Work out who your 'zone one' friends are.

As she's gotten older, Rowe's friendship group has shrunk (by design), and now the 50-year-old estimates she has "five 'zone one' friends."

"They're my besties," Rowe explains. "And then my other friends are in zones two, three, four and so on. And the further they are out in the zones, the less I care about them. Because too often, we put people who deserve to be out in zone 20 in zone one."

Rowe has found that picturing the 'zones' has helped her to care less about the energy zappers and "negative ninjas" in her orbit.

"Because I will think actually, no, you are out in zone 20. So I don't care. I'm not actually going to buy into your nonsense, because you're behaving like you are my zone one, but you're not."

If you've read any interview with Jessica Rowe and husband Peter Overton, you will have felt the love exude off the page. Even 16 years into marriage they talk about each other like lovesick teenagers.

But even Rowe is here to remind you, marriage takes work.

"It's hard work. But it's wonderful work," she tells Mamamia.

"Because being parents, having kids, it's difficult. At times when they're small, it's tedious, it's boring, it's mundane. There are moments when, especially as women, often you feel like life has passed you by when your partner still heads off to work and they still have all their things and you're going 'oh, my god, what has happened to my life?'"

But at the end of the day, Rowe says everything evens back out and "one of the best decisions I've ever made was to marry Petee. Because he's my life partner and we are a team".

8. Something will have to give, and that's okay.

Last year, Rowe made the decision to let work take a bit of a backseat.

With Allegra now 13, and Giselle, now 11, entering their teenage years, Rowe felt like it was time for her to really "lean in hard for my family".

"And that's not to say there won't be other times that I'll be leaning back into work. But my focus [right now] is family and, and there's no shame in that," she says.

"I'm a proud feminist, and I think my brand of feminism is about supporting the different choices that women make. Because the reality is, you cannot have it all at the same time. Something always has to give, and you have to make a choice about what you're willing to compromise on. We're always making those adjustments, and I think we're not honest enough about that."

9. Embrace what you're not good at.

Now, at 50, Rowe is a self-confessed "crap housewife".

But after having both of her daughters, Rowe suffered terrible postnatal depression "that was partly due to the pressure I put on myself to be perfect".

Rowe would see pictures of perfect lunchboxes or amazing dinners and think, "I just do Vegemite sandwiches and Tiny Teddies for my kids. Does that make me a bad mother??"

But now, she's so comfortable embracing the fact she cannot cook she wears it as a badge of honour.

Five years ago, Rowe started posting what she actually cooks for dinner for her family on her Instagram, and it has grown into a movement.

As Rowe tells Mamamia she thinks of her 'crap housewife' trend as almost "the phoenix rising from the ashes of my postnatal depression."

"It's the actual sort of realisation that you don't have to be perfect and you're far happier if you embrace your imperfection and vulnerability and celebrate that. It's okay to serve up mince ten different ways, and have baked beans on toast or cereal for dinner sometimes."

She does, however, have a sneaky tip for fellow haters of cooking - befriend your local butcher. Rowe has been working with Meat & Livestock Australia this year, and they've been teaching her some shortcuts.

"You just go into the butcher, ask them what they've got on special and they will literally tell you a cooking temperature and a time and you're done. I cooked my first ever butterflied leg of lamb recently, and the butcher did it all for me," Rowe tells Mamamia. "Just let them be the expert, they're actually a great source of knowledge and suggestion."

To get straight to the point: If you want it, get it.

Because according to Rowe, who admits body image and body confidence is never something she's felt a lot of pressure to conform to, it's pretty bloody great.