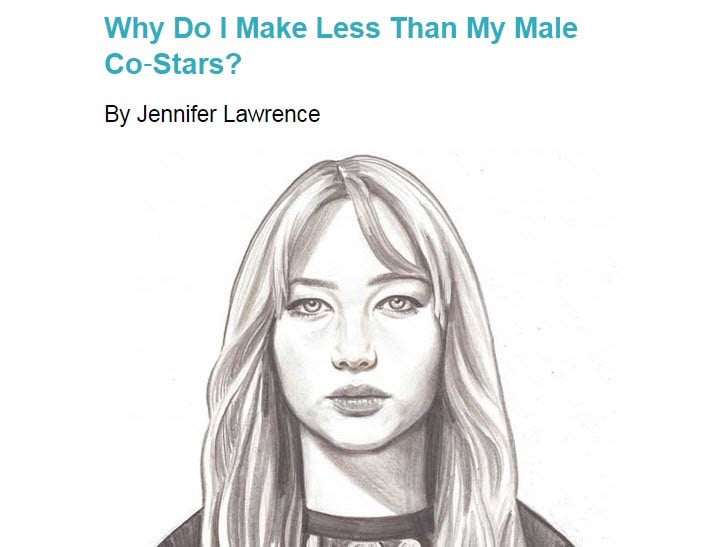 Dear Hollywood, if you like her so much, why don’t you pay her properly?

America’s sweetheart Jennifer Lawrence says she has shied away from openly discussing feminism in the past.

Apparently, she’s been scared to speak her mind about a lot of things, to call men out on their bullshit — to ask to be paid properly.

But she is done. She’s sick of being liked. She’s saying what she thinks.

In a piece published in Lena Dunham’s new publication Lenny, Lawrence has penned a piece entitled: “Why do I make less than my male co-stars?”

Lawrence says she finds it hard to discuss her experiences as a working woman because they aren’t exactly “relatable.”

“When the Sony hack happened and I found out how much less I was being paid than the lucky people with dicks, I didn’t get mad at Sony. I got mad at myself. I failed as a negotiator because I gave up early,” she writes.

She says she didn’t want to fight over millions of dollars, which, let’s face it she probably doesn’t really need.

Even so, Lawrence also suffers from an all-to-common affliction of women in the workforce, the need to be liked:

“I would be lying if I didn’t say there was an element of wanting to be liked that influenced my decision to close the deal without a real fight. I didn’t want to seem ‘difficult’ or ‘spoiled’.”

The thing is, the men that Lawrence was working with, you know, the ones earning millions more for doing the exact same job, never worried about seeming “difficult” or “spoiled”, they just asked for what they believed they deserved and as Lawrence points out were probably hailed as “fierce” and “tactical”.

Lawrence says that yes, this could be a “young-person thing” or it could be a “personality thing” but in all likelihood it’s probably just an undervaluing of the work of women thing.

“I don’t think I’m the only woman with this issue,” she writes.

“Are we socially conditioned to behave this way? We’ve only been able to vote for what, 90 years? Could there still be a lingering habit of trying to express our opinions in a certain way that doesn’t “offend” or “scare” men?”

Whatever it is that’s caused it (*cough* patriarchy) Lawrence is over it and won’t be putting up with it any longer, thank you very much.

“I’m over trying to find the ‘adorable’ way to state my opinion and still be likable! Fuck that. I don’t think I’ve ever worked for a man in charge who spent time contemplating what angle he should use to have his voice heard. It’s just heard.”

Ironically, she is more likeable than ever.

This issue was discussed on Reddit and 'ehimCanadian' laid this out. Check out the difference in pay between JLaw and Chris Pratt for Passengers. 'Patriarchal conspiracy' as one's default setting can make for lazy conclusions.

"Okay so recently Jennifer Lawrence wrote an essay talking about how she was underpaid in American Hustle(http://www.theguardian.com/...[1] )

This is a terrible argument, because she wasn't the biggest the star in the Movie and the fact that movie payouts are based off history of money making that's why Robert Downey Jr can ask for $50m for Avengers and Iron Man

Jennifer Lawrence vs Bradly Cooper and Christain Bale Box office(Note: She was the supporting 3/4 person on cast.)

First movie after Batman so this had hype around it

Nearly a $300M difference, hence she's more vaulble to the movie. It's not sexism it's just numbers she's using her gender as a way to deflect that fact her movies haven't grossed as much.

I am all for equal pay for equal work for women but American Hustle is not a good example. According to one of the editors of the movie actual minutes screen time was Bale : 60 - Adams : 48 - Cooper : 41 and Lawrence : 20. Adams therefore did twice the work of Lawrence for same pay and Bale 3 x for a 9% deal compared to 7%. Cooper was also Executive Producer. At the time pay was arranged Bale and Cooper certainly bigger draw cards particularly for that type of movie which is different audience to Hunger Games. If you want to compare pay have a look at Charlize Theron in Fury Road who in my view was the star. Lawrence was actually overpaid compared to Bale, Cooper and Adams and it is laughable that she is being held out as some sort of spokeswoman for equal pay.

At this level, their paycheques are not going to be down to time on screen, it's an actor's ability to generate revenue or if you're looking at it from a studio's point of view:

Proven star power gives studios a kind of insurance against failure and for that, they're prepared to pay more, not time on screen. For the heads of studios, it's all a numbers (money) game and in their eyes, the most accessible metric or proxy for star power is how much each actor's films have grossed recently.

If I were to criticise this guy's calculations it's that the discrepancy between some of the actors' gross revenue is out of whack with the size of the difference in paypackets. However, these numbers don't hint at a gender effect.

Chris Pratt is being paid far less than J-Law because his pay for Passengers would have been negotiated 2-4 years ago before some of his later films came out and pushed his stardom much higher.

She doesn't do the same job as (some of) her male co-stars any more then the Matilda's do the same job as the Socceroo's.
Her job is to make money for the film company, that is what she is being paid to do. She fills this job via her role as an actress. When her "brand" sells more tickets, DVD's and other assorted merchandise as her male counterparts she will be paid more than them.

Jennifer Lawrence has two successful film franchises, and multiple Oscar and Golden Globe nominations, including wins. She went into that movie having a very recognisable brand following the success of Hunger Games, yet Sony distributed the profits at a rate of 9% to all of the male co-stars and 7% to the female co-stars. I like Jeremy Renner but do you honestly think his "brand" was worth 2% more as a draw card for that movie than Jennifer Lawrence at that point in their careers?

The email hack also revealed massive gender wage gaps in production staff who were sharing the exact same job, so it can not be argued that there was no gender pay gap happening at that film company.

In what way doesn't she do the same job as her male co stars? Is heading up one of the biggest franchises not relevant, because she isn't male? She brings in multi millions from her movies.

The fact that she HAS had so many impressive roles is amazing in itself, given that the vast majority of main roles are written for men - another symptom of a sexist society.

You don't know Jen very well do you? Google her - she does sell more tickets etc compared to her male counterparts..............really!

In movies like the Hunger Games series yes she does and I would say she is paid more than then for those films. In others she does not and is therefore paid less.