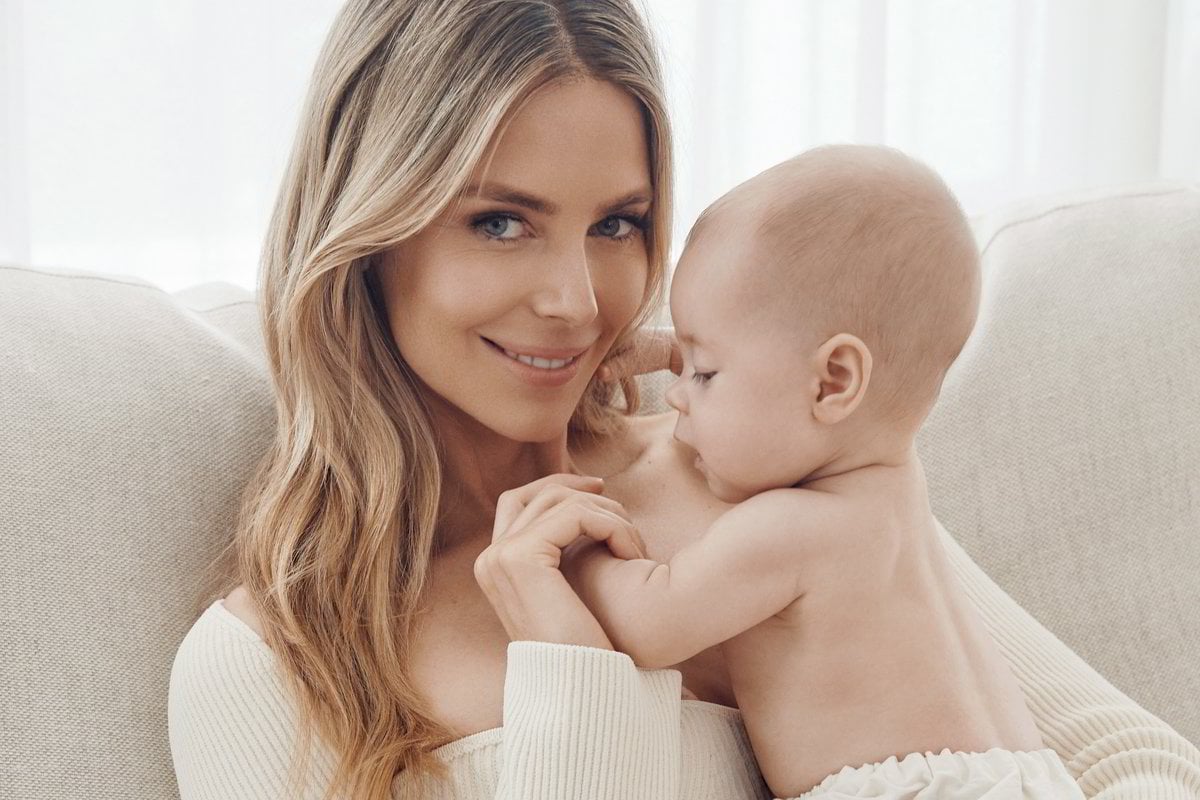 Jennifer Hawkins looks back at even the most challenging moments of her daughter Frankie Violet's first nine months with a smile.

The sleep deprivation, the new routines, yes, even the ill-timed vomit.

Aussie supermodel and TV presenter Hawkins, 36, has been on maternity leave since Frankie's birth in October meaning she, like most of us, has been living a very different daily routine in 2020. And she wouldn't have it any other way.

Some of our favourite celebrities on parenting. Post continues below video.

Hawkins' day begins at Frankie's discretion but always bright and early with a wake up anytime between 5am and 7am.

After a feed, the family enjoy a slow start to the morning.

"I love to have a little snuggle in bed after that, and I tend to get up around 7-7.30. It's just nice to be in bed and baby babbling to her, and if Jake's around before work he might be there as well so it's a little family moment I really enjoy," Hawkins told Mamamia, speaking as a global ambassador for Australian organic baby food brand Bubs.

Hawkins began introducing Frankie to solids at six months old with Bubs products, so when the ambassadorship opportunity came up it was a natural fit. After breastfeeding, Hawkins will feed Frankie a Bubs puree pouch and make herself a smoothie.

With mid-morning comes nap time for Frankie, meaning Hawkins has some time to herself.

"That's my me-time," she said. "At the moment I've been making sure I do my yoga at that time, and if I have a few calls I want to do or work, not that I have a lot of work on maternity leave, but if I have any emails, I'll do them.

"Yoga is the most important thing for me for mind and body. I absolutely love it, it's my little piece of heaven for the day."

Lunch for Hawkins usually involves leftovers or prepped food, before she and Frankie head out the door in the afternoon for a walk around Sydney's Northern Beaches.

"If I want to go out, she'll nap in the pram at a cafe or something, but usually in the afternoon after her sleep I'll feed her and then we'll head out for a long walk or to the shops, meet a friend or something," she explained.

"Getting out walking I love, probably every day for a good 45 minutes to an hour, to get outside in the fresh air."

Hawkins' favourite time of the day starts at 5pm, when her husband Jake Wall, a builder, gets home from work.

"I have a bath with Frankie which is fun... [Jake] will﻿ come home and we'll prep dinner together and have a bit of time with Frankie.

"Then I'll breastfeed her and put her down to bed around 6-7pm."

Hawkins really believes in the importance of 'adult time', of spending quality time with Wall and treating their relationship as a priority after Frankie is asleep.

"That's our time. It's really nice to keep that. I make sure we have dinner together, we have a tequila or a glass of wine together sometimes. We'll watch a movie together. I really enjoy that part of the night because it's with Frankie, then it's our time too."

Happy place. Can’t wait to return with our little plus one! 🌴❤️ (once COVID-19 disappears from all of our lives, soonish!) @jbronze__

Frankie still wakes in the night occasionally, especially since she is now teething, but Hawkins isn't strict on her own bedtime, with lights out anytime between 10-11pm.

"I'm not a napper in the day. I definitely was when she was a newborn, I mean you have to be because you're dead, you're just so tired," she said.

"But for me, that time with Jake is actually more beneficial than going to bed early. I feel like you can keep a bit of your identity, you can spend time with your husband."

The loss of identity felt by new mums is not something Hawkins' has worried about too much, she said, as she had dreamed of being a mother for so many years.

In 2019, Hawkins spoke about her experiences with infertility, including a miscarriage in 2017.

"It hasn't been a big, big issue for me because I was just yearning to be a mother so much. And then, I guess, things change but it's nice to know that you can have your own time but also be a mother too.

"But my priority is Frankie and work, to be honest, is on the side."

Hawkins ensures she takes care of herself as well as Frankie with things that 'fill her cup': Her daily yoga and walks, plus phone calls to family, regular Pilates and a quick beauty trick, courtesy of her LED light.

"I have a LED light at home that I bought maybe four-five years ago. It's got a blue and red LED light which is great for skin, so I use it maybe once every few weeks - honestly I don't know where the time goes!

"I do enjoy that because I'll put a bit of meditation on and just lay under the light for 20 minutes here and there. It's really relaxing, and you feel like 'Ooh, I'm doing a bit of beauty'. Because really, you don't really get out - not just with COVID, it's difficult to get out and do beauty things that I used to do."

Motherhood is far from a picture perfect experience, but Hawkins is relishing her experiences at home with Frankie.

"With the challenging moments, you always look back and they're funny in hindsight... Like heading out in the afternoon, getting everything in the car and then Frankie throwing up everywhere and all over me, and I didn't take a second pair of clothes.

"I think for me prep and being organised really does help those moments and sometimes I'm just not. You've just got to not judge yourself, it's fine. Roll with it."

Hawkins said she is grateful to be in a position where she can spend so much time with her "cheeky little sidekick" Frankie.

"[I am most grateful for] just being able to experience motherhood. I just didn't know whether I would be able to with everything that had happened, but everything just made sense when I became a mum. I just felt really grounded.

"I'm not saying everything was perfect, but I just felt more calm in the role than I thought I would. I am just so grateful to have her in my life."