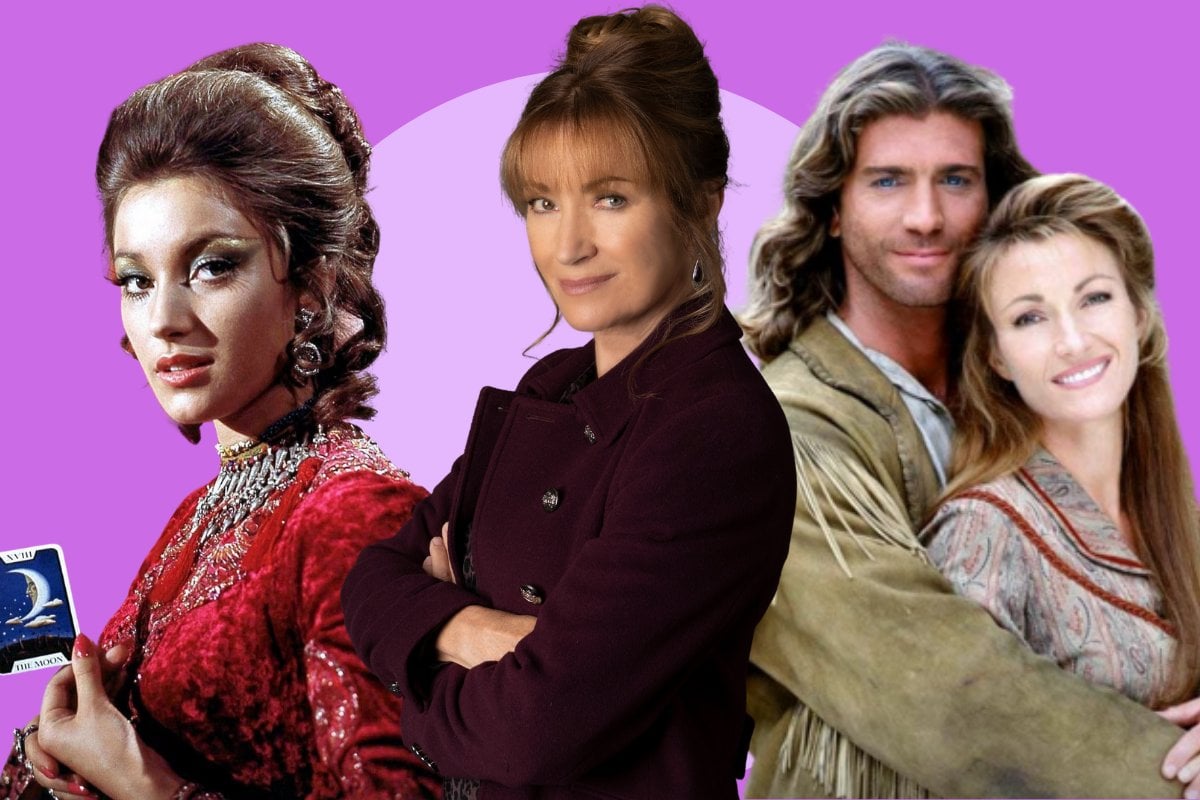 You’d think that after playing 152 characters over 53 years, actor Jane Seymour might be considering leaving it all behind and revelling in the rewards of her illustrious career on a beach somewhere with a margarita or two.

You'd think that, but you’d be wrong.

In fact, during these past few years - when many film and television productions were put on hold due to the pandemic - Seymour did not stop working. She was busy filming TV series The Kominsky Method and, much to the delight of her Australian fans, she came to stay in the country while filming Ruby’s Choice, an Australian production where she played a grandmother with dementia. Recently, she was in Ireland shooting British detective drama series Harry Wild.

For the 71-year-old, as long as there are roles for her, she’s not going anywhere.

"I've got two more movies lined up ready to go right now. And I've just been on a television series that they're talking about maybe bringing back, a comedy called Be Positive. So I have never really had as much work as I've got right now. I mean, that's crazy," Seymour tells Mamamia over Zoom from her home in Malibu, California.

Even though we’re not in the same room, the actor’s energy is palpable through the computer screen. Throughout the time I have with her, she’s warm, articulate, down to earth, and, perhaps not surprisingly given her comedic roles, really funny.

"I love doing [comedy]. I think even for example, a film like Ruby's Choice when it was playing in the theatre, a lot of people go, 'Oh my god, dementia… it’s going to be so depressing.' They were laughing out loud and then crying out loud," she says. "So I think sometimes in life, you know, you laugh at things that are too difficult to have to deal with. You just have to. Sometimes you have to see the comical side of things even when they're devastating."

Seymour has had her fair share of devastation. As a young girl, she had dreams of being a dancer but an injury forced her to abandon that dream. While filming her 1988 telemovie Onassis, she had an out-of-body experience after an antibiotic injection caused her to go into anaphylactic shock and she was declared clinically dead. Her third husband [Seymour has been married four times], father of her two children and then business manager, not only had an affair but bankrupted her as well.

"I was given that role when I was at the lowest end of my life," Seymour reveals. "I'd been married, my husband had lost all my money, I was beyond bankrupt. I had to work, I was losing my home, I was losing everything. And my agent said, 'Well, you know, you've got this to read.' He gave it to me at seven o'clock at night. I read it at 10. He said, 'By 10 tomorrow morning, you have to say yes or no and sign for five years.' But he guaranteed it would never be a series because there’s a woman in the lead, it was a dusty western, etc. And of course, we proved them wrong."

Dr. Quinn ran from 1993 to 1998 and has proved to be one of Seymour’s most popular roles. Fans have been calling for the series to return, and the actor would love to see that happen. Beth Sullivan, who wrote the original series, has the rights back and has written a script set 20 to 30 years after the show ended.

"But we haven't found anyone that wants to make it," Seymour opines. "They keep saying that they're not interested in westerns yet I do happen to see a lot of westerns on television right now... We haven't stopped trying and all the cast are very happy to come back. And then, of course, if we came back, it would be mostly about the younger generation, but we would be in it."

Despite her busy schedule, Seymour admits that acting roles for older women are few and far in between. "What I think is that there's not very much work for people of my age, and when you do get something wonderful, it's exciting because there are a lot of people like me out there who are interested in what life is like for someone my age," she says.

"Every generation can identify because we've all at one point either been the mother, the grandmother or the child… I am very excited by it. Because I think when you've lived as long as I have, you have so much more to bring. You've lived a life."

Seymour loves all the characters she’s played over the years - including Bond Girl Solitaire in 1973’s Live and Let Die - but she has particularly enjoyed the role of literature professor turned amateur detective in Harry Wild. The actor plays the titular character, Harriet “Harry” Wild, and shares in her independent and inquisitive nature.

"When I was younger, I was all about people pleasing and making sure that the school teacher or the director or my parents or somebody approved of something I was doing," Seymour says. "Now having had children and marriages and a career for a very long time, and having a lot more freedom really… what I love about Harry is I think a lot of people, especially in the pandemic, spent a lot of time with ourselves, wondering like, 'Am I really happy? Is this what I really want in life? Do I want to go back or do I want to go forward and find something different?'" 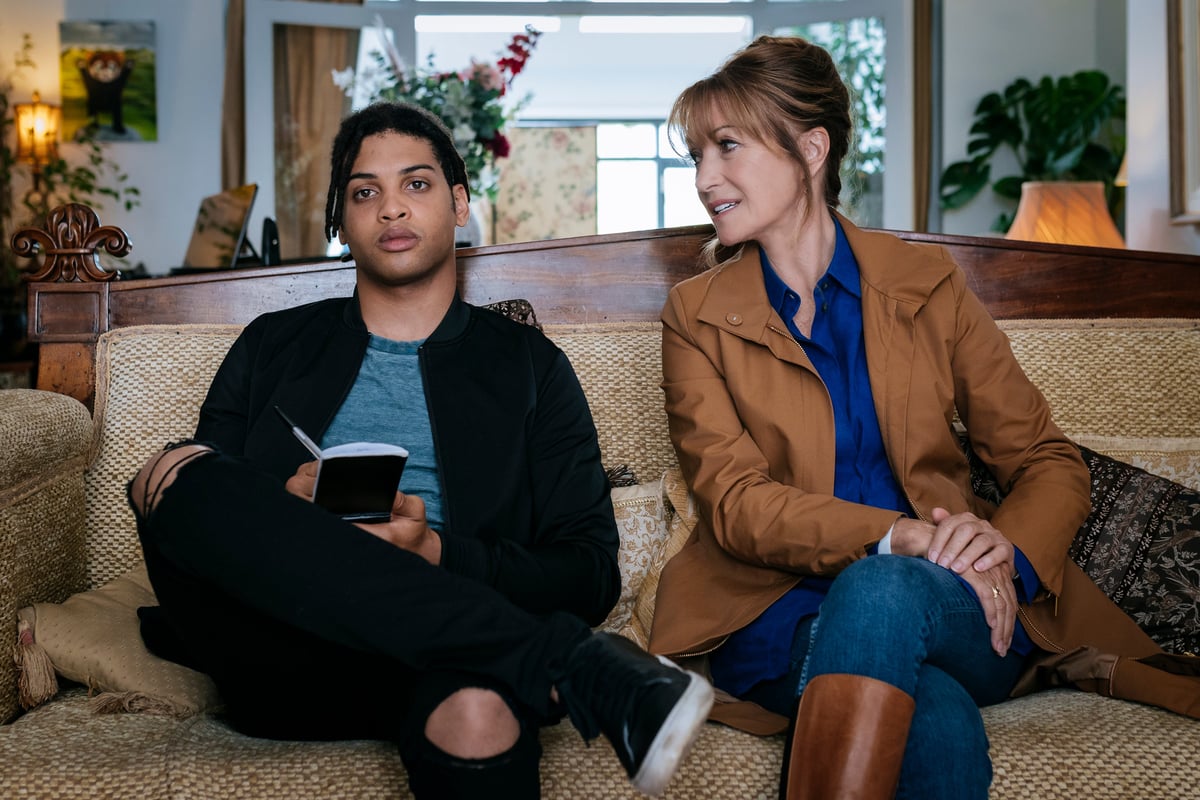 When asked whether there is any dream role she would like to take up, Seymour is hesitant. "You know what, I'm very superstitious about that," she says with a laugh. "A long time ago, I said that I wanted to play Juliet in Romeo and Juliet - safe for me to say that now because they'll never ask me - and I got that close. And so I kind of felt like it was bad luck for me to say that. No, I'm pretty open-minded about a character. I just keep my eyes and ears open."

She may have missed out on Romeo and Juliet, but her 152 acting credits and 53 years (and counting) on the big and small screens is a legacy that few actors can ever attest to.

"I have been given an unbelievable career. I mean, when I look at it sometimes, I go 'wow, did I really do that much?'" she tells Mamamia. "To play Maria Callas, Wallis Simpson, Marie Antoinette, you name it, all these amazing real people, and to do things like Dr. Quinn. I’ve played everything. I’ve played ingénues, love interests, villains, serial killers, victims… and in all periods too. I just think I've been incredibly lucky that way."

Luck, maybe, but definitely a whole lot of talent and hard work too.