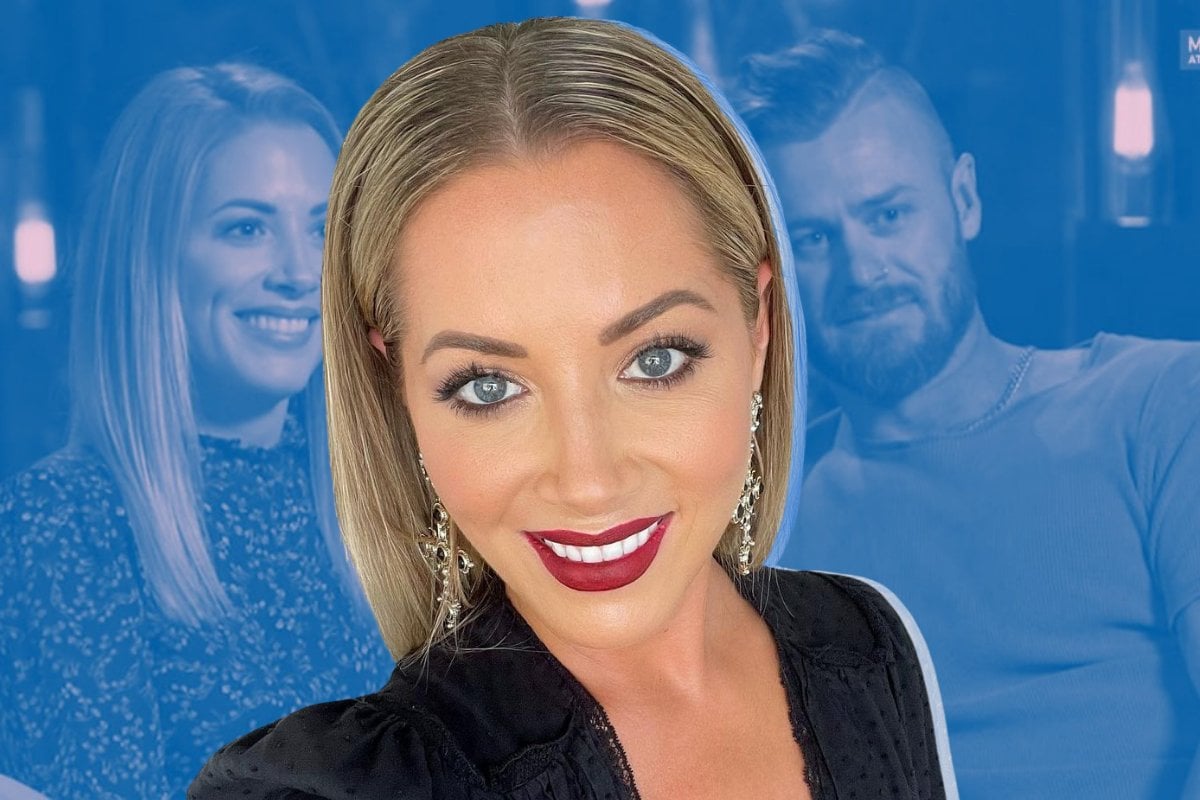 The fact that reality TV shows edit various contestants into 'roles' should surprise precisely no one by now.

There's the narrator, the 'wifey' and of course, no matter the show, the 'villain'.

Married At First Sight has a lot of 'villains'. Some are very much justified because... you can't... just edit Bryce into Bryce, ya know?

Another of 2021's MAFS villains was bride Jaimie, who had a short and not-at-all sweet stint on the show after being matched with her fake-ex-husband Chris.

Like so many MAFS relationships, their fake marriage didn't go too well. They made it through one commitment ceremony, before calling it quits literally a day later.

Chris alleged Jaimie told him that the only reason she wrote Stay at the Commitment Ceremony was to save face.

He brought up how Jaimie only asked him to "stop being so nice because you're making me look bad" on camera, and Jaimie was horrified because yep, this made her look really, really bad. She called him a liar and Chris stormed out.

Well, not really. MAFS may be over but the drama never sleeps.

Jaimie has previously hinted about being unhappy at her MAFS portrayal in various Instagram posts, but she hasn't done much media.

After leaving the show, she addressed a few things in a photo caption, saying her 'handwashing' comments were a bad joke, rebuffing her 'princess' portrayal and claiming she did not ask anyone to fake anything.

Now, Jaimie has apparently broken her contract to give a really long, two-part interview with gossip pod So Dramatic! to share 'the truth' about her experience on reality TV.

In total the two eps are nearly three hours, which is... a lot, especially considering she was on the show for precisely a week. It's a really full-on chat, and clearly cathartic for Jaimie to share her side of things as a way of putting it behind her.

In the interview, she shares her side of many of her most memorable moments on the show.

Her first appearance on MAFS was at her wedding to Chris, which was automatically... not great. She criticised his hair and a number of other things early on, which became an ongoing storyline.

"I think watching it back I was probably just as shocked as the people that were watching with us," she explained of her wedding day episode.

"There're things that I did say, so coming down the aisle when I said 'uh oh, the hair', I meant it, because you know he hadn't yet turned around and first impressions are exactly that. You see someone and you're like 'oh my god', but a haircut doesn't make a person so the fact that that kinda got turned into this big storyline is ridiculous."

Jaimie said her comments after their vows, such as those about not usually liking nose rings, were due to being asked certain questions by producers.

"I honestly said nothing bad about Chris on the wedding day at all and I think that I felt like the producers were pissed at me for not saying enough and not causing enough drama... they asked questions in a certain way to then be able to frame it differently. So when I said 'I'm not a nose ring kind of girl but you know, that's fine and I'm glad he could be how he is', they can easily cut that too 'I'm not a nose ring kind of girl'."

She said her "Queensland haircut" term was actually coined by Chris after he told her as a joke that everyone in Queensland had a similar hairstyle to him.

Another hair comment came during their Honeymoon when Jaimie told Chris she would "fix" his hair. Jaimie explained this was missing some pretty important context involving a windy day and a dance move.

"What didn't get played on our wedding day was a really nice wedding dance with a big dip, so in the vineyard [during their honeymoon] we did the dip, and so as we were walking back I was like 'I'll fix your hair for you' but the way they play that was just me being a b*tch. I was honestly trying to be a good wife."

The other infamous scene was when Jaimie confronted Chris about washing his hands after going to the bathroom, which she said was a joke that didn't quite land, and didn't actually impact their relationship at all.

"We didn't have a fight. That happened, and we went on to have - apparently according to one of the producers - the best honestly boxes he's ever seen in all seasons that he's been on the show."

She said later in the honeymoon, things went downhill. Jaimie had skipped breakfast in order to get ready and during a one-on-one interaction with Chris, she claimed he was "aggressive" and "intimidating" and swore at her before slamming the door and leaving.

After trying to make peace before going on a helicopter ride and being rebuffed, Jaimie said she confided in a producer that she didn't know what to do, and was told to have an on-camera chat with him about it.

But when Chris came in for their chat, she claimed he had been told what to say by producers.

"When Chris came back for this conversation where I was meant to confront him about his behaviour that morning, he'd been, I guess, fed words to confront me with saying that I was picking on him and not accepting him for who he was which was completely false...

"Chris told me later that night he'd been produced."

After the honeymoon, Jaimie said she tried to leave after Chris stormed out on her three times in a day. She said she was told she had to stay and continue filming with him because they didn't have enough footage for their storyline.

Jaimie said hardly any of this was shown on TV, and what was shown was a 'watered down' version.

She's not the first to claim that crucial information has been left out or manipulated in production.

After the reunion dinner, Liam criticised producers for entirely leaving out a storyline involving a video of other contestants making fat-shaming and homophobic comments about him.

After finally leaving the show, Jaimie developed Bell's Palsy, which she put down to stress from the show.

She said the psychological impact from the show has been enormous, she's been ruthlessly trolled and is attending weekly therapy sessions to help her work through it all.

Unsurprisingly, she'd "never in a million lifetimes" do the show over again.

"I'll never be the same. I never will, and that's something I'll have to live with... there's always going to be this perception of me that hangs over."