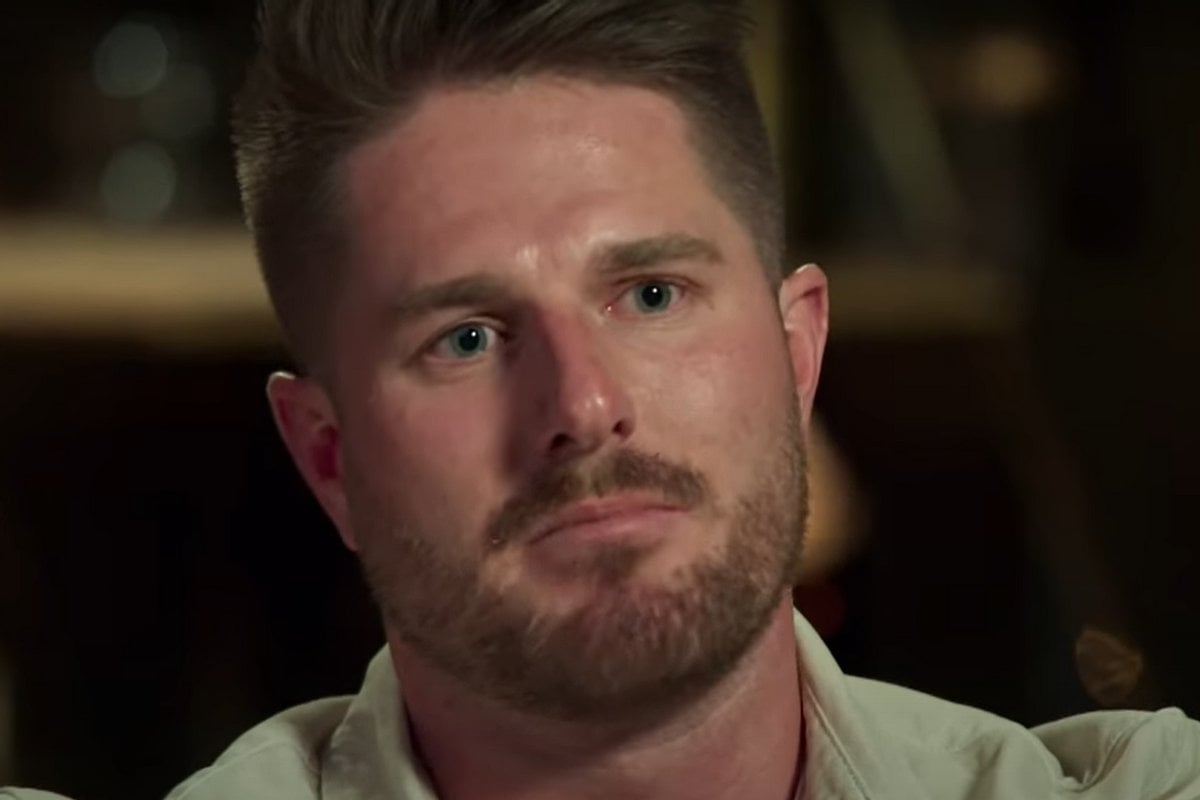 Over the past few weeks, there's been a spotlight on the behaviour of Bryce Ruthven on Married At First Sight.

The controversial radio presenter, who was matched with Melissa Rawson on the reality show, has been making headlines for all the wrong reasons.

It all began on the couple's honeymoon, when the conversation turned to Melissa's appearance during an honesty box discussion.

Melissa and Bryce get some difficult feedback from their families on Married At First Sight. Post continues below.

When asked whether Melissa was his type, Bryce responded: "I'll be completely honest. Not 100 per cent."

"I’ve always gone for the blonde hair, blue eyes, tan kinda girl. And usually tall. I can’t say 100 per cent I’d come up to you in a bar and buy you a drink," he continued.

The next week, Bryce was asked to rank the women in the experiment.

He ranked Melissa as the "fourth most attractive" among the rest of the wives.

In the weeks since, we've watched Bryce slowly pick away at Melissa's self-esteem, telling her she'd be perfect for him if only she had the right eye colour.

We've watched Bryce shame his wife for dating a married man, despite the fact Bryce himself cheated on his fiance.

When I watch the early stages of Bryce and Melissa's relationship play out on Married At First Sight, I'm often reminded of the person I dated in my late teenage years.

It was my first serious relationship. And from the outset, I was head over heels.

But as our relationship progressed over the next few years, I slowly became a shell of my former self.

He isolated me from my friends, accused me of cheating if I spoke to another man, and often told me, flat out, that I was crazy.

Our relationship didn't start out that way. It was a slow progression of manipulation and control.

When we first started dating, he had a habit of complimenting me when I was looking my most dishevelled. When I hadn't washed my hair in days, or when I wasn't wearing a shred of makeup.

At first, it made me feel special.

I could be wearing anything, and he’d still call me beautiful.

But over time, it turned into something else. It was about control. Control over the way I looked. The way I dressed. The way I was perceived by other men.

He didn’t want me to wear makeup or "revealing" clothing. He didn't want other people to "see me like that".

Most of it came down to his searing jealousy over my interactions with other men.

I had always had a number of close male friends. But he accused me of being promiscuous or cheating on him if I spoke to them. It wasn’t until years later that I learned about the violent threats he made against those friends, warning them to stay away from me.

It often felt like I was dating two completely different people.

Some days, he would shower me with compliments and gifts. On others, he humiliated me in front of our friends, drawing attention to my deepest insecurities and picking apart my flaws while I sat silently. He would openly speak about other women, pointing out the 'features' that I was lacking.

That humiliation often led to arguments. But somehow, the tables always turned on me. I was always the one to blame. The one who kept f**king up.

By the time our relationship ended, I was completely isolated from my friends, and my self confidence had been decimated.

But it took me years to realise the problem wasn't me.

As a naïve teenager, I accepted his behaviour as normal. I didn't realise his possessiveness was a red flag. I didn't realise that his penchant for showering me with compliments was a form of 'love bombing', a common manipulation tactic used by narcissists.

It took me years to acknowledge I was in an emotionally abusive relationship. And even now, years later, I'm ashamed to admit that without the veil of anonymity.

This week, as Married At First Sight makes headlines once again, that relationship is back at the forefront of my mind.

Like many Australians, I've watched Married At First Sight for several years.

I've laughed at the chaotic dinner party moments, and I've gossiped about the contestants with friends.

But this week, I've finally turned it off. 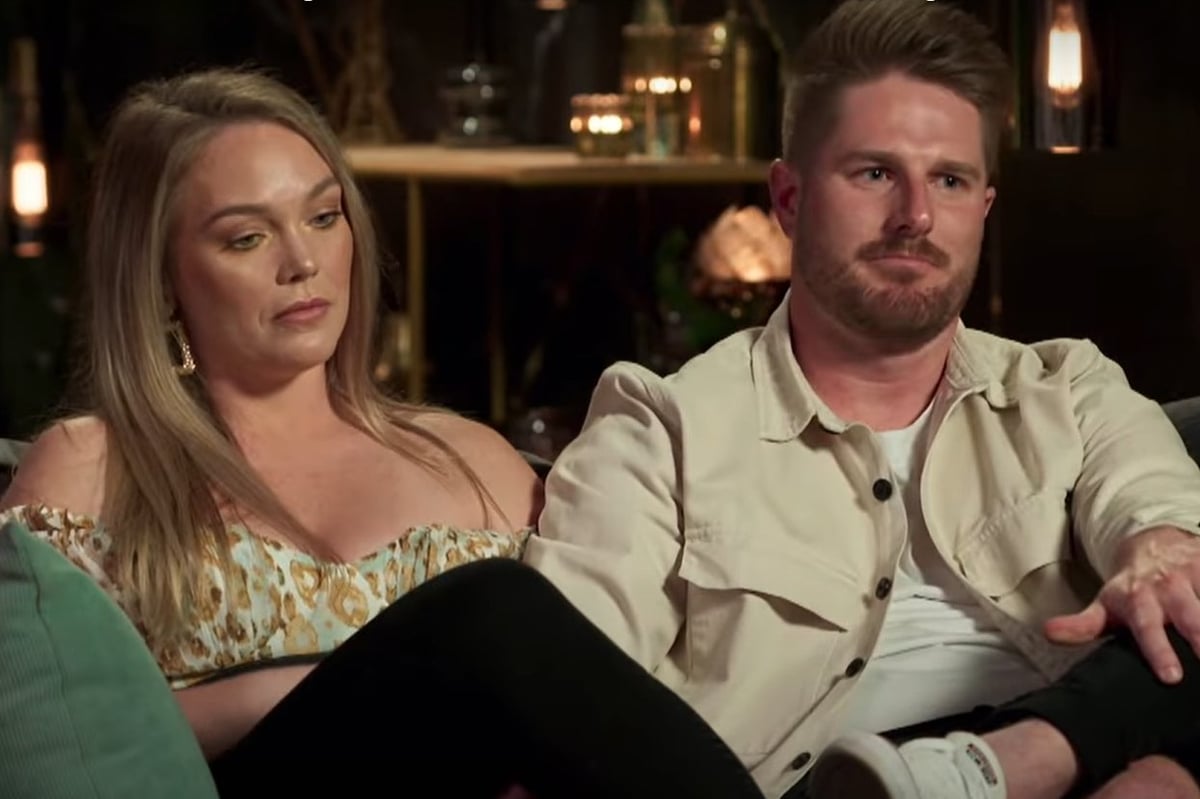 Over the last few weeks, Bryce and Melissa's relationship on MAFS has been the subject of countless headlines.

On social media, viewers and critics alike have aired their concerns. For many, it's clear that Bryce and Melissa's relationship has made for increasingly uncomfortable viewing.

But while viewers have continually called out Bryce's concerning behaviour, there hasn't been a peep from the show's 'experts'.

In fact, when Melissa and Bryce chose to stay in the experiment on Sunday night, expert John Aiken simply responded: "Good."

Of course, MAFS is a reality show. We haven't seen every aspect of Bryce and Melissa's relationship on our screens, and we know there's editing involved.

But when we see a woman belittled on our screens night after night, that's no longer entertainment.

When I was in an unhealthy relationship, I didn't identify any red flags. I naively believed that my situation was normal.

If a situation like Bryce and Melissa's plays out on TV every night and we don't call it out, countless other women won't be able to see those red flags either.

Reply
Upvote
Bryce, take a look at yourself. 4th most attractive person in a roomful of three.
S
sandy c a year ago

Reply
Upvote
2 upvotes
I'm pretty sure John Aiken has no formal qualifications, certainly not in psychology. He says he "trained in the field of relationships", which is something we could all say really. It's called "living".
I thought the phrase "first, do no harm" came from the Hippocratic Oath. While it seems it doesn't, it is one of the first edicts of medical ethics, both physical and psychological. And it most certainly IS NOT what is happening here. And if I seem to be attacking John Aiken specifically, I'm sorry. It's just that his sympathetic and kind facial expressions seem to hide something that makes me just as uncomfortable as watching Bryce and his narcissism.
I was raised by a narcissistic father. I saw first hand the controlling and cruel behaviour he inflicted on my mother. And how that made her into the type of person who stood by him rather than try to save her children. On the show, Melissa is so happy that she and Bryce are thinking of having children. How sad for everyone.
R
rush a year ago