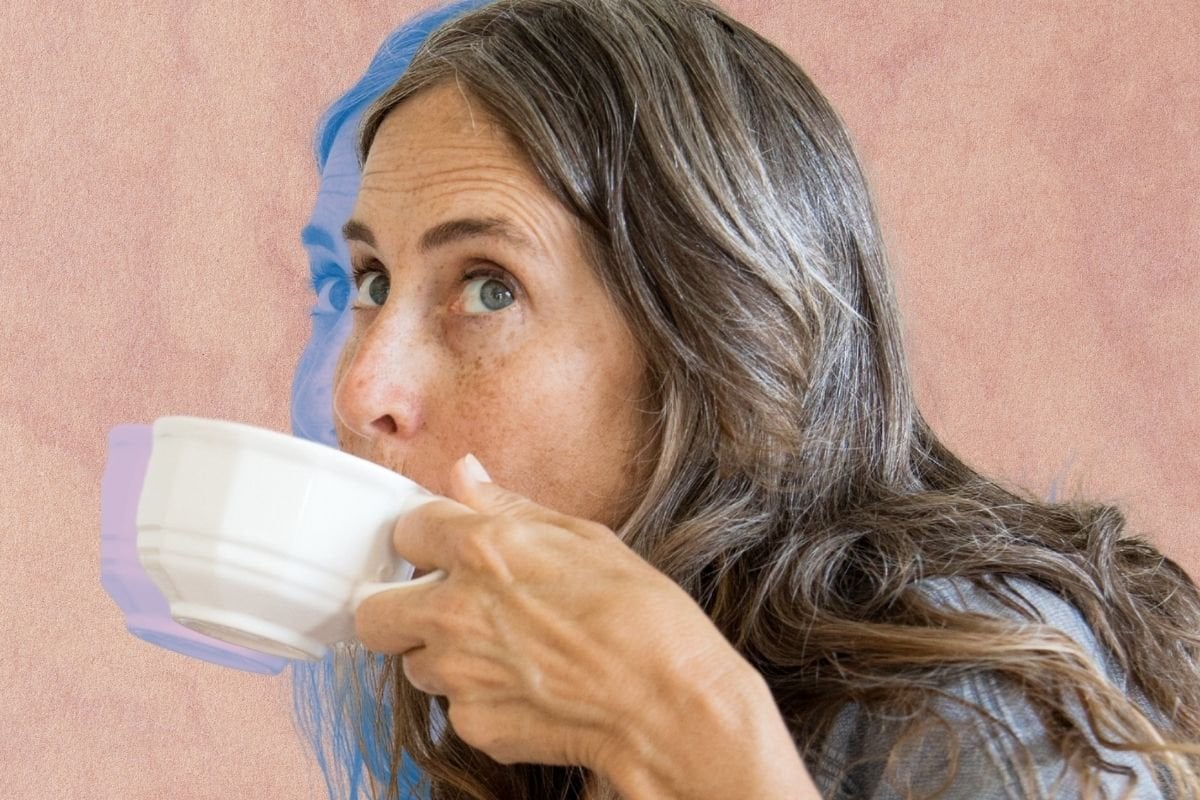 Almond milk has become awfully ~trendy~ over the last few years. It’s shimmied to the top of the cafe chain and has quickly made a name for itself as the go-to choice for coffee drinkers, paving the way for other non-dairy alternatives.

And for good reason. Like, it's obviously healthier, yeah? And cause it's a non-dairy alternative it's better for the planet and all that stuff, right? RIGHT?

Watch: Bec Judd on drinking her own breast milk. Post continues below.

Well, we don't want to alarm you, but that’s where you might be a wee bit wrong.

Y'see, we put on our investigator beanies (they're so cute! You should totally get one) and spoke to nutritionist Fiona Tuck from Vita-Sol, and asked her some questions re: almond milk.

We thought we knew all the answers, but it turns out we actually know *nothing* about that thing many of us opt to drink every day.

First of all, what is almond milk?

Anyone know what's actually in almond milk? No?

"It tends to be low in calories, saturated fat, and does not contain lactose which may be why it is a popular (but not healthier) milk of choice."

W-wa-ait. What? What do you mean 'not healthier'? Hahaha! Was that a typo?

If you're opting for almond milk you're usually hoping it's a ~healthier~ option, no? Well, Tuck is calling bullsh*t on this one.

According to standard guidelines, almond milk has about one gram of protein per serving, compared to dairy's eight grams per serving.

Listen: The Quicky speaks to an expert and a mature woman who spent decades living with an eating disorder before getting help, to examine why so many of us are suffering in silence. Post continues below.

"Almond milk contains little-to-no natural calcium, is low in protein and naturally lacks the range of nutrients such as B vitamins, phosphorus and magnesium that are found in cow's milk," explains Tuck.

So, while it may be the lower calorie choice, Tuck said it's not a healthier choice of milk when it comes to nutritional value.

It's also generally highly processed. So if you've been trying to stick to non-processed foods, almond milk is doing you a real dirty.

"Many almond milks are ultra processed, low in protein and calcium and contain refined plant oils and added sugar. They are not the 'healthy' alternative to cow's milk that many believe them to be," said Tuck.

So, yeah - that's kinda it in a nutshell. Some brands might fluff around with some filler ingredients in there to act the same way as cow's milk on the nutritional scale, buuut they won't stack up with protein and nutrients.

Almond milk is obviously better for the environment, though, right?

YEA-no. Almonds actually take a heck of a lot of water to produce. Like, way more than most other crops. They thirsty.

To put it into perspective, for 100mL of almond milk (not even enough for your morning latte), you need 100 litres of water.

The ratio here seems... not good.

What's more, 80 per cent of almonds eaten around the world come from California. ICYMI this is an area that has an extremely drought-stricken agriculture system. Not ideal.

The good news? Almond production is booming in Australia, and it's expected that there'll be around 123,000 tonnes to be harvested in Australia this year (according to ABC News).

With this in mind, we'd recommend looking for brands that use Australian-grown almonds, so you can cut down on those nasty transport emissions that come from shipping.

As we just said (are you skimming?), a lot of the above (the nutritional value and the sustainability factor) will depend on what kind of almond milk you're buying.

"Look for an almond milk that does not have added sugar and plant oils such as sunflower oil, and preferably one that is fortified with added calcium," suggests Tuck.

And obviously if you're dropping dairy from your diet, you're going to want to speak with a professional to check it's all good, yeah?

"It's important to seek guidance from a nutritionist or dietician to ensure that you are not missing out on valuable nutrients," adds Tuck.

"Out of all the plant milks, soy milk tends to have a better nutritional profile, but again, look for calcium fortified and no added sugar or refined plant oils. Always read the ingredient label to see what is in your milk of choice."

At the end of the day, it's your own personal choice what you put in your body - so, you do you!

If you're lactose intolerant, if dairy milk isn't for you, or if you're vegan, just be aware that you're not downing almond milk for the calcium ('cause there's not a lot going on) and know that you might miss out on some of the key vitamins and minerals you would usually get from milk.

But! You can definitely make that up somewhere else in your diet. So don't get all freaked out - it's just a good-to-know kinda thing.

What's your go-to choice when it comes to milk? Share with us in the comment section below.