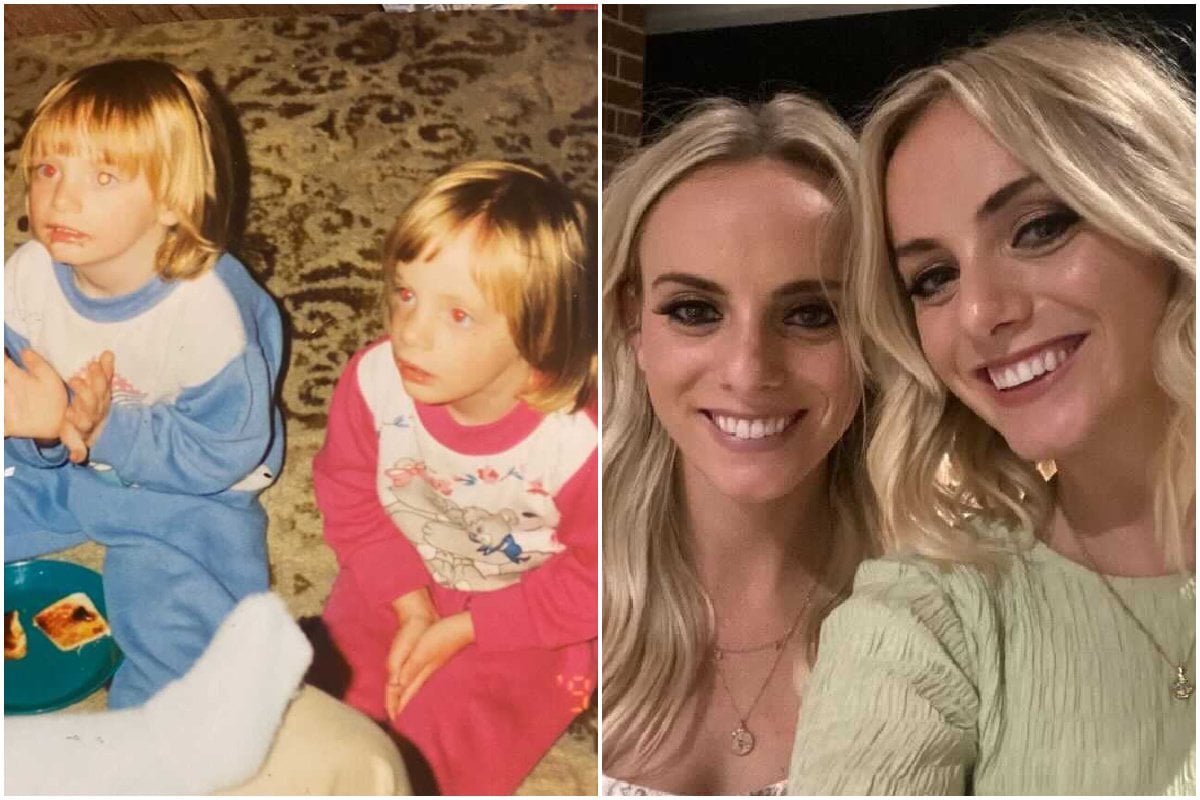 It all began a few months ago.

There's a series in the Good Weekend called 'The Two Of Us'.

It tells the story of a unique relationship, from spouses to co-workers to siblings. And towards the end of March, we were in it.

We know. We know.

"You're not even interesting!" you cry.

"No one cares about your story," you prepare to type and look that's not really the point of this article but please go ahead.

The first sentence read: "Fraternal twins Jessie and Clare Stephens, 30, started writing a blog together at university and have worked at media group Mamamia since 2015."

We thought it was pretty innocuous. But dozens of people who know us, and dozens more who listen to the podcast Mamamia Out Loud, were eager to point out a factual inaccuracy.

"You're not fraternal!" some posted in the Facebook group, Mamamia Outlouders.

For anyone unfamiliar with twin lingo - fraternal means you were, from the moment of conception, two different eggs. Genetically, you are no more similar than any other siblings. You just happened to share a womb at the same time.

Identical twins happen when a fertilised egg splits in two. Because you came from a single egg, you share identical DNA.

Since very early on in our mums pregnancy, she was told she was having fraternal twins. Something something separate placentas... something about a sac. We weren't really listening. We've just always known we were fraternal twins.

And two-and-a-half years after we were born, our mum and dad had another set of fraternal twins, our brothers Jack and Nick. That's two sets of twins under four.

As the discussion unfolded on Facebook, our mum joined in.

"I was there!" she declared. "They're fraternal."

Except that wasn't that.

Our curiosity was piqued.

People messaged us privately to escape the wrath of our defensive mother.

Listen to Clare and Jessie share their DNA results on air during this Mamamia Out Loud episode. Post continues after podcast.

"It's the only way to know for sure whether you're identical or not."

But we're millennials and therefore our identity is everything.

Our new internet friends sent us in the direction of Easy DNA and even told us how to get a discount!

So off we went. Without reading any of the terms and conditions or thinking about cloning/privacy, we swabbed the inside of our cheeks and sent our DNA to strangers on the other end of a prepaid envelope.

And waited. And hypothesised what life would be like if we were identical twins. And tried to make bets with Dad so we'd make some money. Then we waited some more.

OK it was only a few days, but it felt like a long time because our identity was on the line??

Then came the email.

"Based upon the DNA analysis Jessie Stephens and Clare Stephens are identical twins. The probability of Monozygosity is 99.999999995381%." 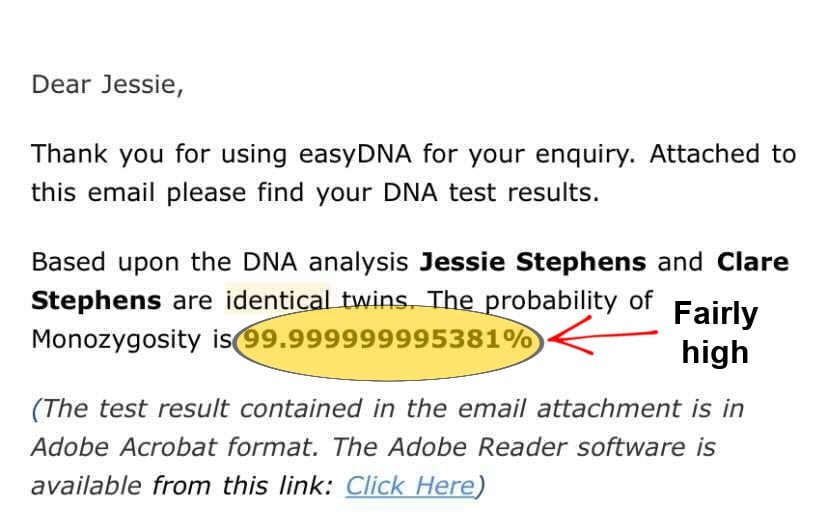 OUR WHOLE LIFE HAS BEEN A LIE AND WE BLAME MUM BUT SHE BLAMES THE MEDICAL PROFESSION WHO IN THEIR DEFENCE WERE DOING THEIR BEST WITH THE INFORMATION THEY HAD AT THE TIME.

But IMAGINE if you were told your sibling was actually your identical twin, Rachel. Because that's literally exactly what happened.

What an identical result means is that any difference between us (interests/skills/height) are environmental and not genetic.

One of us has always been taller, but that same twin hogged all the nutrients in the womb so was born double the weight of the other.

One is a better runner which we thought was genetic but maybe the other is just really lazy?

One argued for two decades that she had 'dyscalculia' which she found on Google when she looked up 'dyslexia except for maths'. But now we know that's not possible because the other one is just fine at maths.

This also adds more awkwardness to those situations where one of us calls the other "ugly". Like dude no, you literally have my face but just... environmentally skewed.

We are also now convinced that our brothers must be identical, because they look far more alike than we do.

And if they are (they'll do the test, don't worry) then our family is one in 100,000. Which according to science makes us both special and exceptional.

So the moral of the story is: If you're a 'fraternal' twin (same sex, obviously) but have the same eye colour, hair colour, and skin colour, then you're... maybe actually identical?? And you should swab your cheek and send it to a stranger from the computer?

Reply
Upvote
1 upvotes
Well you both are identical.  I mean by that, that you look identical.  Even if you were fraternal in the semantic and technical sense, it wouldn't matter because it's clear you're twins and identical.  So identical twins.  And what good and informative twins you are!  I love reading articles from you both.
O
omollee 6 months ago

Reply
Upvote
My husband also recently found out (at 38 years old) that he is an identical NOT fraternal twin. I was the one that insisted they get tested as I wanted to know if my daughters were likely to have twins, but as having identical twins is not genetically passed on they aren’t any more likely to have twins than anyone else. I found it fascinating but they (my husband and his identical twin!) didn’t seem phased 🤷🏼‍♀️
News
General
Opinion
True Crime
Politics
Sport
Explainer
Entertainment
Celebrity
Reality TV
Movies
TV
Books
Rogue
Royal
Lifestyle
Beauty
Fashion
Weddings
Home
Wellness
Health
Fitness
Travel
Food
Parents
Before The Bump
Pregnancy
Baby
Kids
Teens
School
Parent Opinion
Work & Money
Money
Finance
Career
Lady Startup
Relationships
Sex
Dating
Separation
Friendship
Family
Real Life
Couples