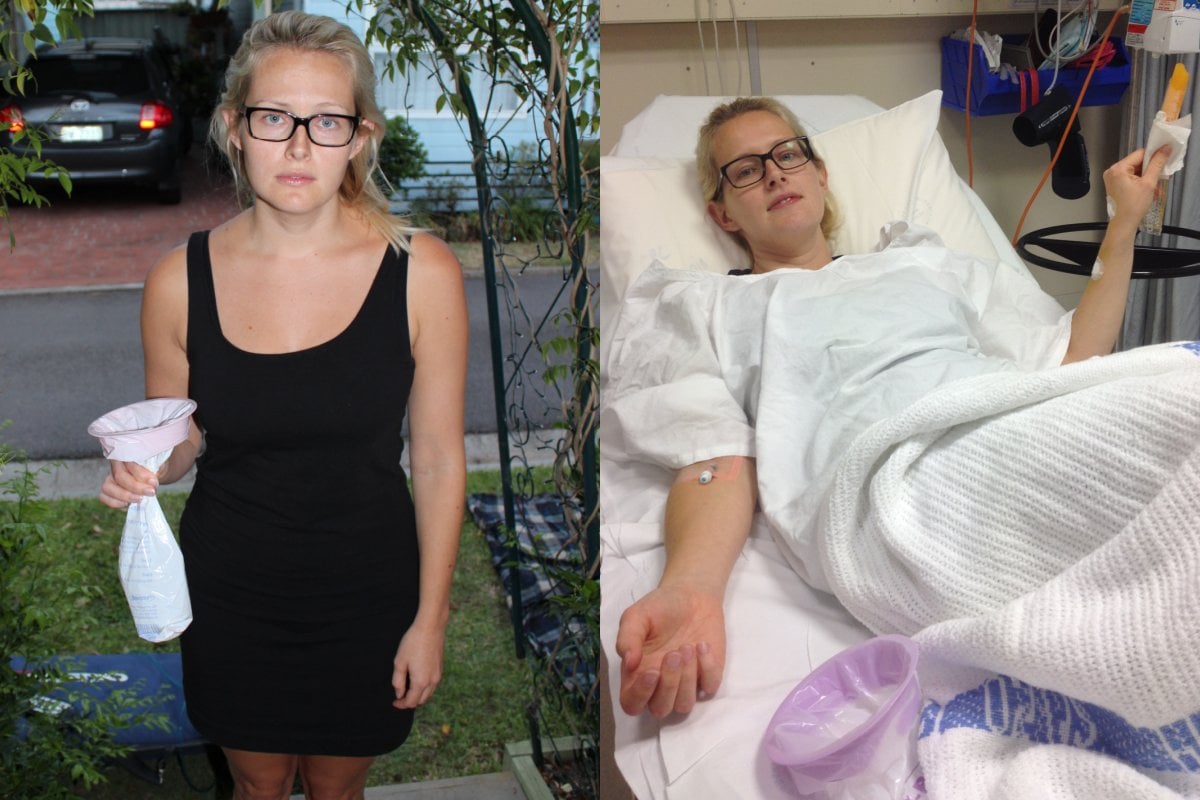 The week or two after our positive pregnancy test was a bubble of pure bliss, dreaming about our future as a family of three.

Little did I know what lay ahead of me: a pregnancy journey that was jaded by hyperemesis gravidarum; my journey to hell and back.

By keeping my eye on the final prize, I survived hyperemesis gravidarum (HG) twice - and have two beautiful healthy children to show for it. I hope that by sharing my story and advice, I might help other women currently experiencing this pregnancy disease.

But first - what actually is HG?

The HER Foundation defines HG as a potentially life-threatening pregnancy disease that may cause weight loss, malnutrition, dehydration, and debility due to severe nausea and/or vomiting, and may cause long-term health issues for the mother and baby (or babies).

My two HG pregnancies were the hardest times of my life. Just imagine having the worst food poisoning or stomach flu imaginable, but knowing it may last day-in-day-out for months on end. HG was not only extremely physically challenging with severe nausea and vomiting, weight loss, extreme salivation, sensitivities to smells, constipation, and hospitalisation due to dehydration - but it pushed me emotionally to the brink, feeling so sick that even taking a shower felt like a marathon. 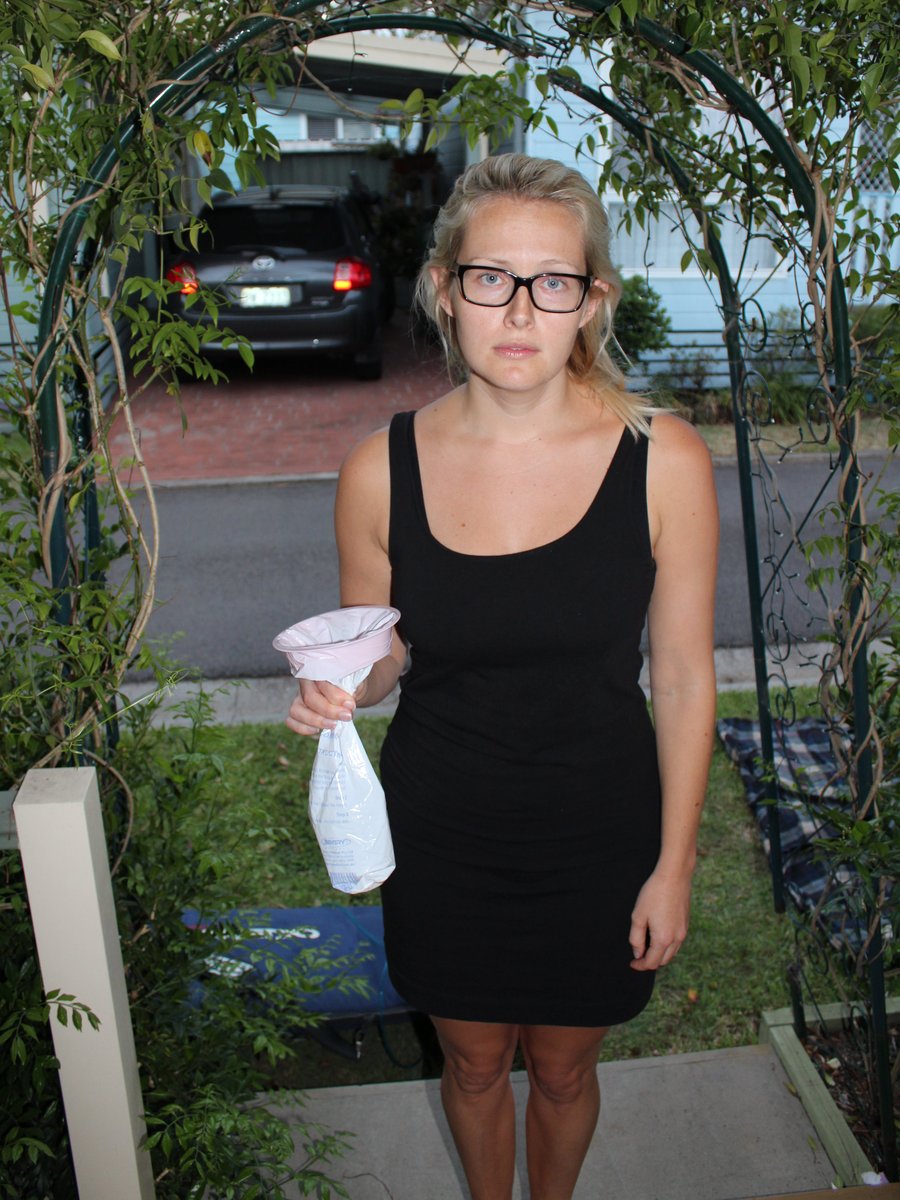 During my first pregnancy I wondered if I would ever feel like my normal self again. I wished on some days that I was no longer pregnant so that I could eat a meal and keep it down. I desperately wanted to be one of those glowing pregnant women that everyone speaks about.

HG is a condition I would not wish on my worst enemy. If you're currently experiencing it, just know that you will feel better again once the baby is born. The months of hard work building a HG baby will be worth it. You might even be crazy enough to go back again and have a second like me - or more.

Get medical attention as soon as the repeated vomiting begins.

If you feel nauseous, cannot keep fluids or food down, and have multiple vomiting episodes all day every day, this is more than just regular morning sickness.

Make it clear to your medical professional how bad you really feel, how little you are drinking/eating and how many times per day/night you are vomiting. Keep a close eye on your weight before getting pregnant and be sure to tell the doctor how much weight you are losing.

During my first pregnancy, I lost nine kilograms during the first trimester, which was 15 per cent of my pre-pregnancy weight.

I delayed starting medication as I was worried about the effects of the medication on the baby and thought that the 'morning sickness' would get better by week 12. How wrong I was!

When I got the news that I was pregnant with my second child, I made an appointment that day with my GP and set up a HG action plan, which resulted in starting the medication earlier and only losing a few kilograms.

Start on medication as soon as your doctor prescribes it to you. Don’t wait and think that it may pass on its own - if it is HG it likely won’t pass until 20 weeks at the earliest.

From my own experience, starting medication as early as possible once the vomiting started was best.

During my first pregnancy, one drug I was prescribed had no effect. I found that another type helped limit the vomiting and I was able to eat on some days, but it had an awful side effect of extreme constipation.

I took stool softeners and enemas but nothing really helped until I was able to stop the medication at approximately 32 weeks gestation.

During my second pregnancy I was prescribed a different drug which was effective and didn't have the constipation side effects.

But each morning or evening when I took it I would feel like I had taken a sleeping pill and walk around like a zombie. I slept most of the day and night for the first trimester.

My body gradually got used to the medication and by the second trimester I could leave the house after taking it, but I still needed to sleep much more than normal.

For pregnancy constipation I took magnesium tablets from the pharmacy after consulting with my doctor, and I found these really helped.

Continuing with the magnesium tablets after the baby was born was also a great way to keep regular after a difficult labour. 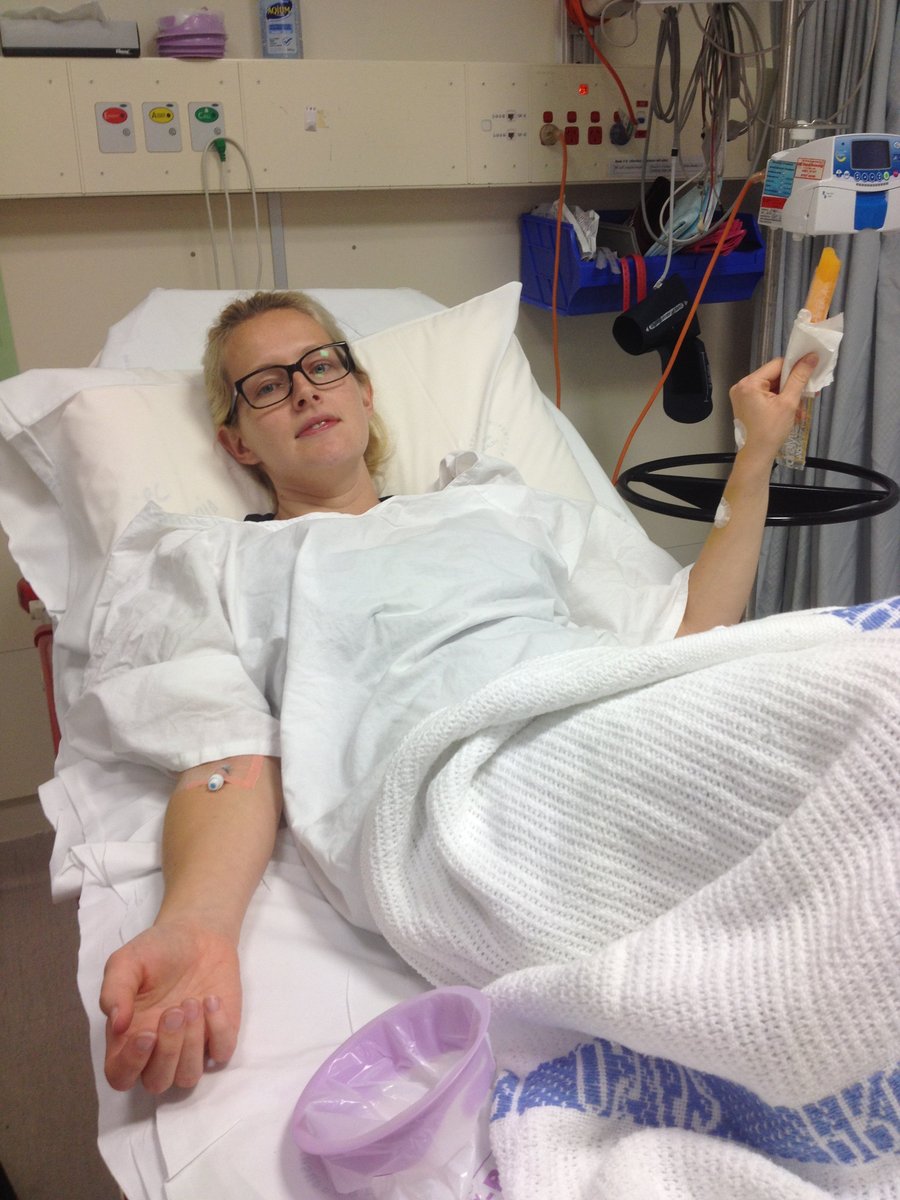 My main piece of advice would be to eat through the sickness.

I know this sounds totally absurd when you feel so terrible. Food will be the last thing you want to think about, smell, or be around.

Choose foods that will come back up easily. Even if you vomit them back up a short time later, at least some of the nutrients and energy will be absorbed which will make you feel slightly better.

The foods that worked best for me were.

- Blue Powerade mixed with a good dash of soda water.

- Chicken broth made from scratch with chicken including bones, salt and carrots. I couldn't stand garlic and onions so had to leave these out as the smell was a huge problem for me. Initially I just sipped small amounts of the broth and gradually built up to small amounts of chicken and sometimes carrots.

- Sniffing the skin of a lemon. This helped me a lot when I felt nauseous or experienced a potential trigger.

Common smells will tip you over the edge and cause violent vomiting episodes. Identifying something that helps is crucial. Other HG survivors also suggested smelling peppermint, but this didn't work for me.

If you have a craving when you are feeling awful, just go with it and eat while you can.

At the beginning of both of my pregnancies before 12 weeks, protein worked best. Surprisingly, something I rarely ate  - McDonald's cheese burger patties (minus the bun/onion/sauce/mustard/pickle) worked a few times, while carbs and sugar made me feel worse.

During first pregnancy with my daughter, once the worst of the HG wore off, all I could eat were sugary snacks and cakes. With my second pregnancy with my son, all I wanted were savoury foods like meat, chips and salty potatoes.

Taking it easy and sleeping a lot is so important. The more you push yourself, the worse you will feel.

For me, even a short five-minute walk outside could tip me over the edge for days afterwards and result in violent vomiting episodes.

Try sleeping as much as possible, all day if needed. Usually my nausea was worse during the day, and especially if I had overdone it the day before.

I seldom vomited during the night. I usually woke up at night and ate a snack (make sure you have something readily available by the bed or easy to grab in the kitchen) and most of the time it would stay down.

After the extreme period was over, a piece of bread with butter or a glass of milk would do the trick.

Call on your close friends and family, tell them what you're going through and ask for their support.

Find information online from The HER Foundation and local HG support groups on Facebook. Just reading about other people going through the same thing as you will keep you sane and provide great tips, especially advice relevant to where you live.

I would not have got through my two pregnancies without my family and friends, especially my supportive husband who had to do (almost!) everything for me, and my mum, who flew across the other side of the world to take care of my daughter and I during my second pregnancy. 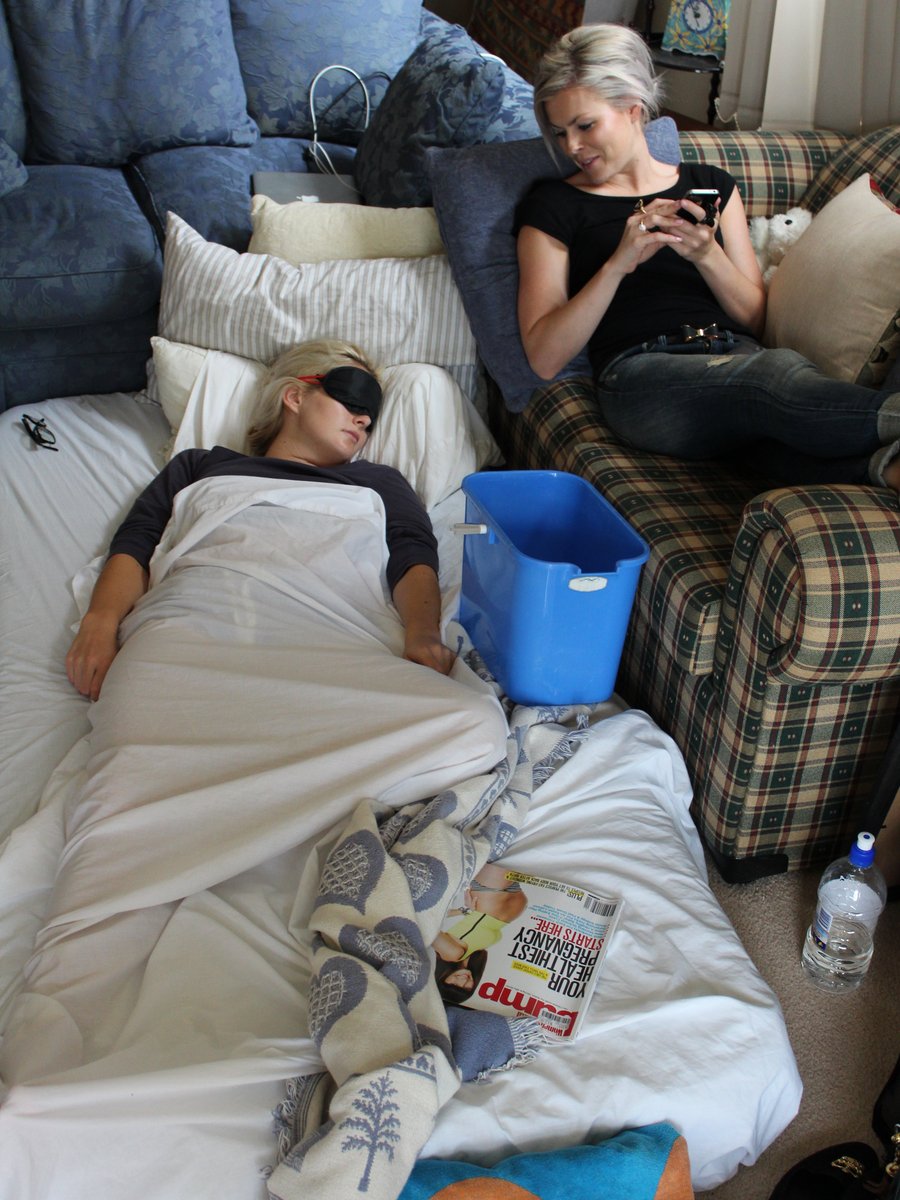 "Call on your close friends and family." Image: Supplied.

Do not believe anyone that tells you HG ends at 12 weeks.

I think my second pregnancy was easier to deal with because I expected the worst and thought I would be sick for the entire time, rather than thinking it would pass at 12, 20 or 30 weeks.

It will more than likely ease up at about 20 weeks, but I have heard of other people that are still very poorly until the moment they give birth. Better to expect the worst and stay sane than have your hopes shattered at major milestones.

You may also experience that HG will go away during some of the pregnancy and come back in the weeks leading up to the birth. This was the case with my first pregnancy. I felt a lot better at 32 weeks, only to find that just before the birth I started vomiting again and even vomited through the labour.

My first post pregnancy meal, which was disgusting hospital food, will always be remembered as the best tasting food I ever experienced (it stayed down).

It's important to keep your expectations low when it comes to HG. Your pregnancy will be a struggle, but it will be totally worth it when you have your gorgeous baby in your arms - and can eat again. 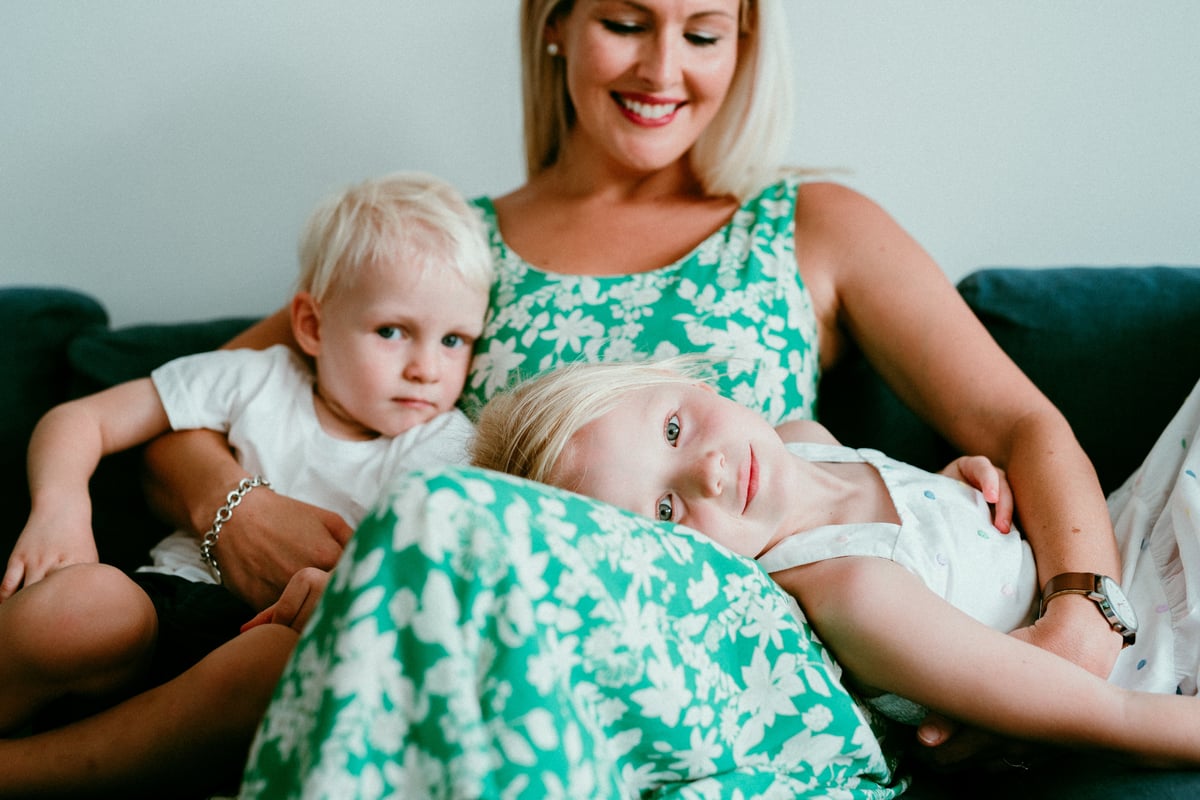 Image: Supplied/Clare Barker Wells Photography. Many years have passed since my HG pregnancies. When I think back to that time I still get very emotional and cannot believe I grew two healthy babies on so little food while feeling so rotten.

To all the amazing, strong HG mums, HG mums-to-be and HG angel baby mums, I express my admiration to you all.

Reply
Upvote
I've had one 'ideal' pregnancy and one with HG. There's no comparison between the two!
With the HG pregnancy, it kicked in at 7 weeks and didn't stop until I gave birth. I started some meds at week 10 which helped me stomach some food without throwing up (most of the time) but it didn't take the feeling away.
It really impacted my life - I took significant time off work at the worst stages or and I couldn't do any kind of exercise without needing to throw up. Then I had a baby with reflux that struggled to sleep so I quickly fell into PND. It was a long road out, and sadly took a lot of the joy of having a new baby away.
Hats off to the mums who go back for another child after having it - absolute superwomen.

Reply
Upvote
1 upvotes
I had HG during my two pregnancies twenty seven and twenty three years ago.  My obstetrician didn't take me seriously when I said I was vomiting up to 50 times a day - he said it was normal. I lost 7 kilos in the first trimester and was allergic to medication that stops vomiting. I cannot even hold down water and vomited until my throat was lacerated and was vomiting blood.  I went in and out of hospital for drips when I got really dehydrated.  I was vomiting until my 36th week but I ate like an elephant - I didn't care that it was mostly coming out again - I wanted a healthy sized baby.
My second pregnancy, HG was worse but I knew what was going to happen and mentally, I didn't feel as bad.  I knew I had to sacrifice the nine months of being sick to have a healthy baby.  Oh yes, I switched obstetrician, he understood and I didn't feel like a freak.
To all mums out there suffering from HG, keep strong, stay calm and do what you need to do to keep you and your baby safe.
News
General
Opinion
True Crime
Politics
Sport
Explainer
Entertainment
Celebrity
Reality TV
Movies
TV
Books
Rogue
Royal
Lifestyle
Beauty
Fashion
Weddings
Home
Wellness
Health
Fitness
Travel
Food
Parents
Before The Bump
Pregnancy
Baby
Kids
Teens
School
Parent Opinion
Work & Money
Money
Finance
Career
Lady Startup
Relationships
Sex
Dating
Separation
Friendship
Family
Real Life
Couples