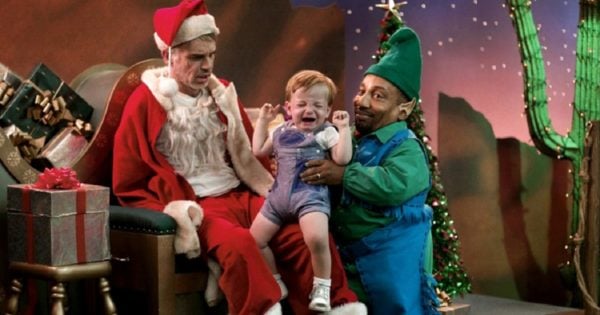 My children don’t know it yet but this is their last year with Santa. Next year I plan to shatter their little worlds. I’m not only planning to kill Santa but I’m going to get rid of the Easter Bunny and the Tooth Fairy as well, in one fell swoop.

Philip, 12, already knows. He demanded to know the truth three Christmas ago after his friends started talking about it and his subsequent Google searches further embedded the seed of doubt that had formed. After weeks of fobbing him off, hiding from him and changing the subject, he demanded to know.

So I told him and he couldn’t believe it. First came shock, then anger, then he asked me a million questions, then he came to accept it and now he helps me execute it all. He and I are a great little team. He is the elf to my Santa, rabbit to my Easter Bunny, the Tinkerbell to my Tooth Fairy.

21 kids who are scared of Santa. Article continues after this video.

But enough’s enough. I just can’t do it anymore.

Not only do I find the whole Santa thing financially burdensome – “Don’t worry Mum, I’ll ask Santa for an X-Box because it’s too expensive” – my children have started becoming suspicious.

Giovanni, eight, and Caterina, seven, have been circling around asking the question, “Is Santa real?”, since July and I could feel myself getting weaker.

Since making the decision to lift the curtain and reveal Oz, I’ve felt much better. I’m anxious too. How will they react to the epic subterfuge? I’m also a little sad.

My babies aren’t babies anymore. Now I need to carefully plan how I do it.

My first idea was to break the news to them both at once at our favourite family restaurant, Hog’s Breath. But that would ruin Hog’s Breath for them which has always been a place of joy and comfort. Then I thought of telling them while we play at the park so they are a bit distracted and less likely to yell in my face.

“WHAT DO YOU MEAN SANTA ISN’T REAL? YOU MEAN YOU’VE BEEN LYING TO US THIS ENTIRE TIME?!?”

That, or something like it, will probably come from Caterina. Sure she looks cute but when she gets angry she can be a bit scary. Giovanni is a bit of a worry though.

He has autism so he'll either calmly accept it - having already figured it out in his clever little head - or he won't quite absorb what I am saying and I'll have to have the same conversation for weeks if not months.

Like at the start of the school year when it takes him forever to remember the name of his new teacher and the location of his classroom.

I figure that once I tell them that Santa isn't real the conversations about the Easter Bunny and the Tooth Fairy will follow on quite naturally. I'm pretty sure they'll feel slightly betrayed by me and then incredibly upset at the fact they will now only get one gift for Christmas, Easter eggs and toys in shopping bags and no money for losing teeth.

It will be harder to explain why they can't tell any of their friends what I have told them, not that their friends have given them the same courtesy.

Their friends are the reason they became suspicious in the first place. Even if my children do blurt out the truth I don't really care.

Society forced me to lie to my kids, now they know the truth, and we all have to suffer through the consequences together.

This Christmas, which is probably their last truly magical Christmas, I plan to go all out. I've never done Elf on a Shelf because I like my sleep too much and often fall asleep before the kids do, meaning I would forget to move it each night. But I've ordered a much larger Christmas tree than usual as well as plenty of sparkly decorations, I've got Christmas crackers and plan to give them extra gifts each wrapped individually, as well as stockings which I will fill to the brim.

Then, come January, I will confess all and take them to the nearest toy store to buy back their affections.