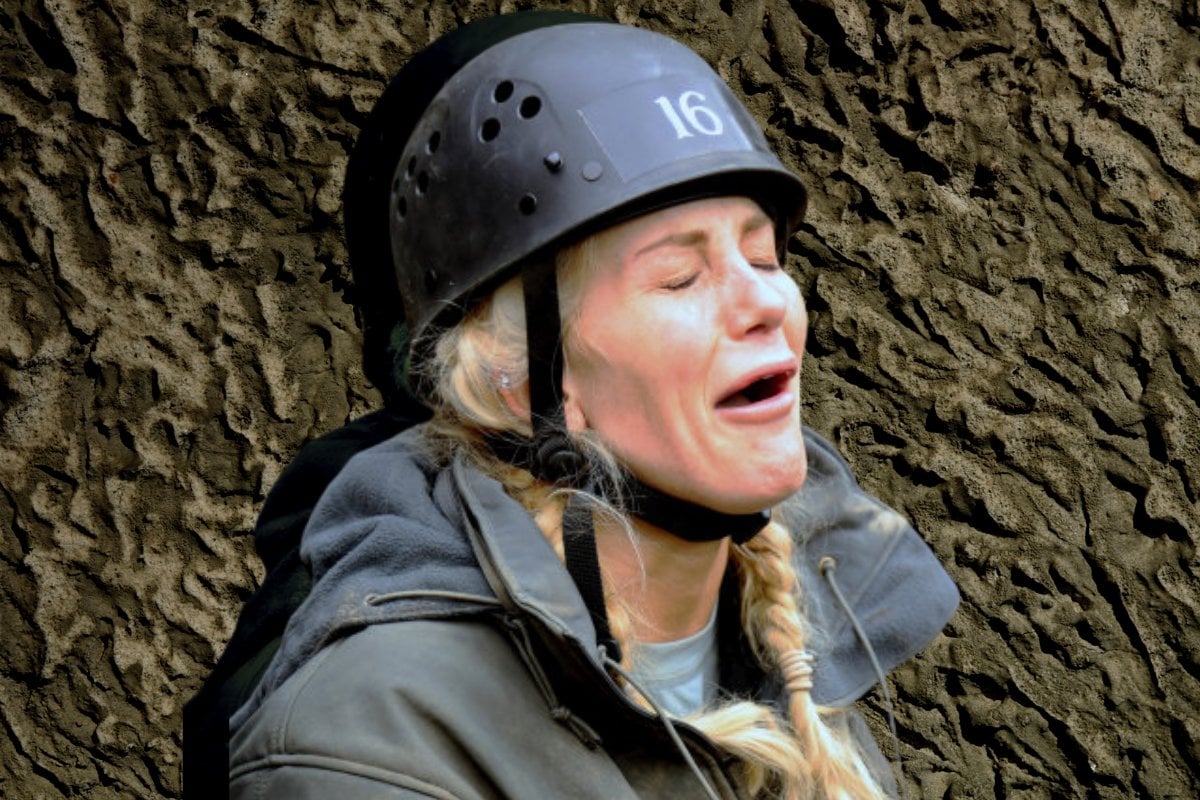 SAS Australia has been on our screens for a couple of weeks now and we would be lying if we said we haven’t revelled in watching celebrities get a ‘beasting’ from ex-Special Forces soldiers while covered head to toe in mud.

The show declares the tasks the celebrities are forced to face are pulled directly from SAS recruitment schemes (AKA the hardest and most brutal job application in the world). But we really want to know exactly how similar it is…

So Mamamia spoke to Officer X, who endured the Parachute Regiment recruitment scheme and served for the SAS, to find out how real life and reality TV really match up.

Overall, do you think SAS Australia is an accurate portrayal of the SAS recruitment process?

"It’s a fairly decent adaptation of the selection process, but the key point of difference is that while the TV show is filmed over two weeks, the real SAS selection takes six months."

So, what isn’t accurate about SAS Australia?

“All that emotional s**t. The warm cuddly stuff post-VW never happens. When you’re gone, you’re gone. And you go straight back to your normal life.

Watch: Why Candice Warner signed up for SAS Australia. Post continues after video.

“Beyond that, the interrogations are well off. To give you an example, when you’re in the escape and evasion part of the course you are set up to be caught and, essentially, captured by the enemy.

“Once you’re caught you’re held for at least 72 hours. It’ll start with an initial interrogation, but it gets more and more intense. You won’t be allowed to sleep, you’ll be left in the freezing cold. You’ll be stripped naked and interrogated by officers to humiliate you. Your family will be threatened and they’ll push you to the edge and, basically, break you.

“Everyone will eventually break, and they will keep going until you do. They need to find your breaking point and figure out if you’re strong enough to protect information at any cost.

“So, it’s not a pissy little chat around a table.” 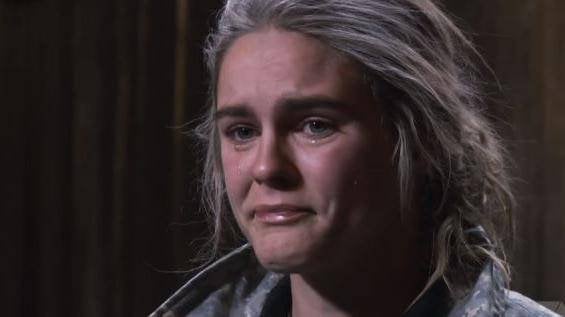 What physically happens during the course? What’s the agenda?

“The main agenda is to take you out of your comfort zone, a bit like they do on the show, where they can be challenged 24/7.

"There will be a lot of sleep deprivation and physical excretion over extended periods. They do four weeks at least 'on the hills', which is essentially carrying a lot of kit, over a long distance, very quickly."

Listen to The Spill, where hosts Laura and Kee interview Erin McNaught on her near-death experience on SAS Australia. Post continues after podcast.

“The whole getting the celebrities up randomly at two o’clock in the morning to give them a beasting is spot on. The staff want to remove the ability for you to plan anything - so if you think you’re going to have five hours sleep to rest and recharge at any point, you can think again.

“Interrogation is a separate part of the six months. Escaping evasion, resisting capture and interrogation is part of another four-week course within the recruitment process. You set off on your own, with no kit, no money, no nothing and you’ve got to get to a certain point at a certain time and not get caught along the way. And, of course, you have people chasing you.”

...if you’re drawing comparisons to The Hunger Games right about now, then you’d be dead on the money there.

Here’s the proper breakdown of what recruits have to do:

First four weeks = ‘On The Hills’.

Where you’re carrying a lot of kit, a long distance, as quickly as possible. Often on undulating terrain like mountainous regions where is cold, soggy and s**t.

Next up: ‘Officers Brief’.

Where recruits are just bombarded with scenarios and are expected to produce plans for doing certain tasks under intense conditions. E.g. How to get a captured soldier out of enemy territory.

Recruits then have to pitch their plans to an auditorium of senior officers who then grill them on every detail of their plan - essentially ripping it to shreds. The plans will never work because they are deliberately given scenarios where there can be no right answer.

Then they’ll move onto: ‘Jungle Phase’.

This is four weeks of being ‘on your belt buckles’ (for non-squaddie folk reading this, that means crawling on your tummy with your butt down, keeping as low as physically possible). You have to create your own tracks in the thick of the jungle. That can often mean that you just move 150 metres in about eight or nine hours because the terrain is that difficult. 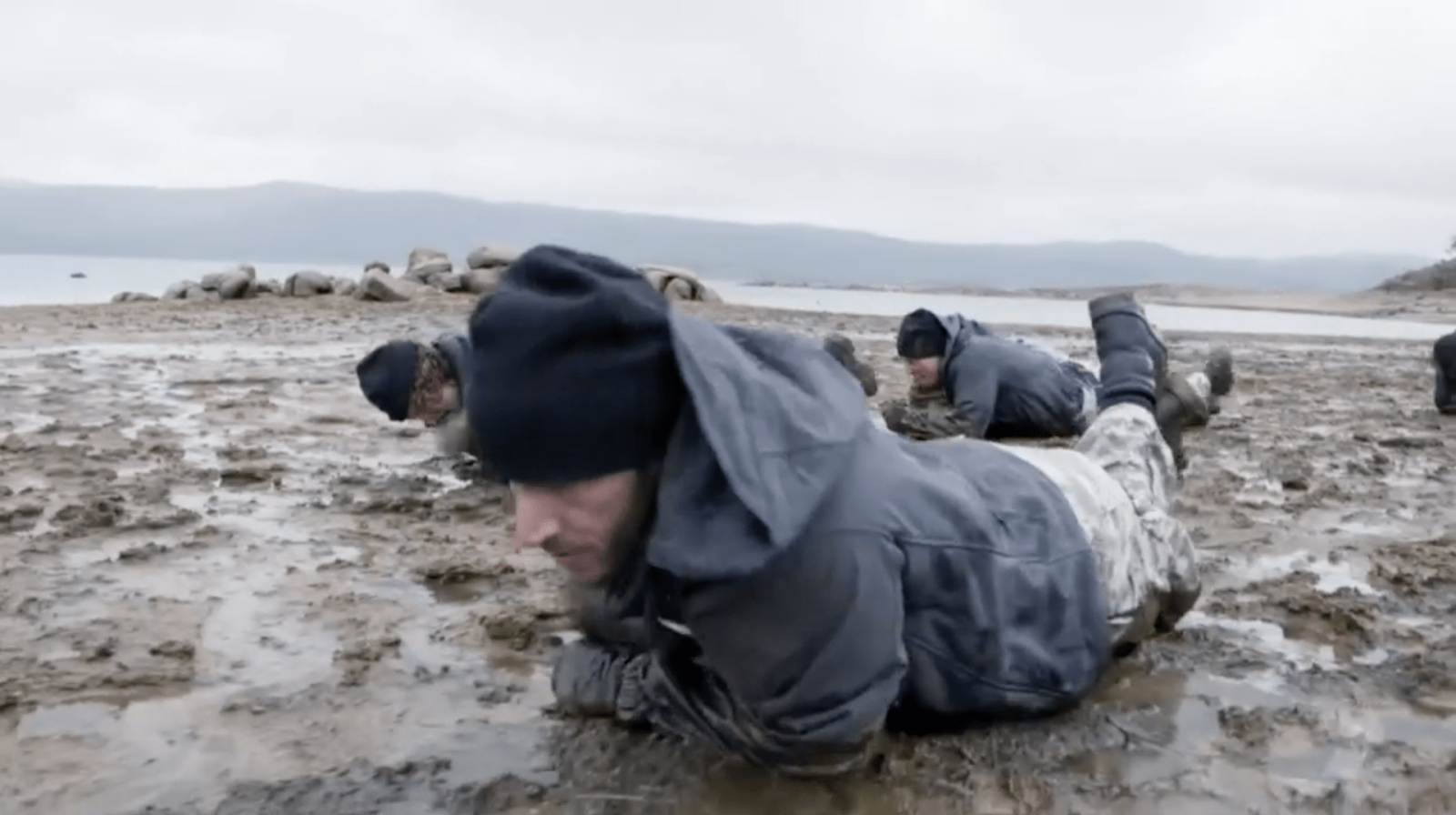 Do they really make you get neck-deep in freezing cold water and just stay there until you get hypothermia?

What’s the average age that military personnel would go through SAS recruitment?

“Probably between 24 to 29 years old. There will be a few that apply in their thirties, but because the army is trying to get 10 to 15 years of service out of you, they need younger blokes. Probably the youngest age I’ve seen in recruits is 21.”

So for the SAS Australia cast, Jackson Warne would have ~just~ been able to apply along with Sabrina Frederick (23), Shayna Jack (22), Eden Dally (28) and James Magnussen (29).

The rest of the cast (AKA the over 30s) would have been turned away.

How many people actually make it through recruitment alive?

“There’s usually two rounds of these SAS recruitment courses a year, and in the first year that I served with the SAS out of 200 applicants only two got through. That’s 200 of the best of the British military, and only two were at the standard expected.

“There have been whole rounds of recruitment courses where no one gets through. It's definitely not a guarantee.”

If a recruit fails to get through the selection process, do they ever get to try again?

"If you don’t succeed, they will tell you if you can reapply. If you had an injury the first time, then you may be able to go again. If you had an attitude problem, definitely not."

Speaking of, when someone has an attitude problem (like Firass), are they treated as it’s shown on SAS Australia?

“Very similar. They will be shown the error of their ways and the consequences of their actions. You are constantly reminded that this is a ‘team’ thing. You are part of a team, you support the team, you protect the team.

“What happened with the actor guy [Firass Dirani] and his punishments were spot on. I’ve seen that exact thing happen in real recruitments. They are belittled in front of their team.” 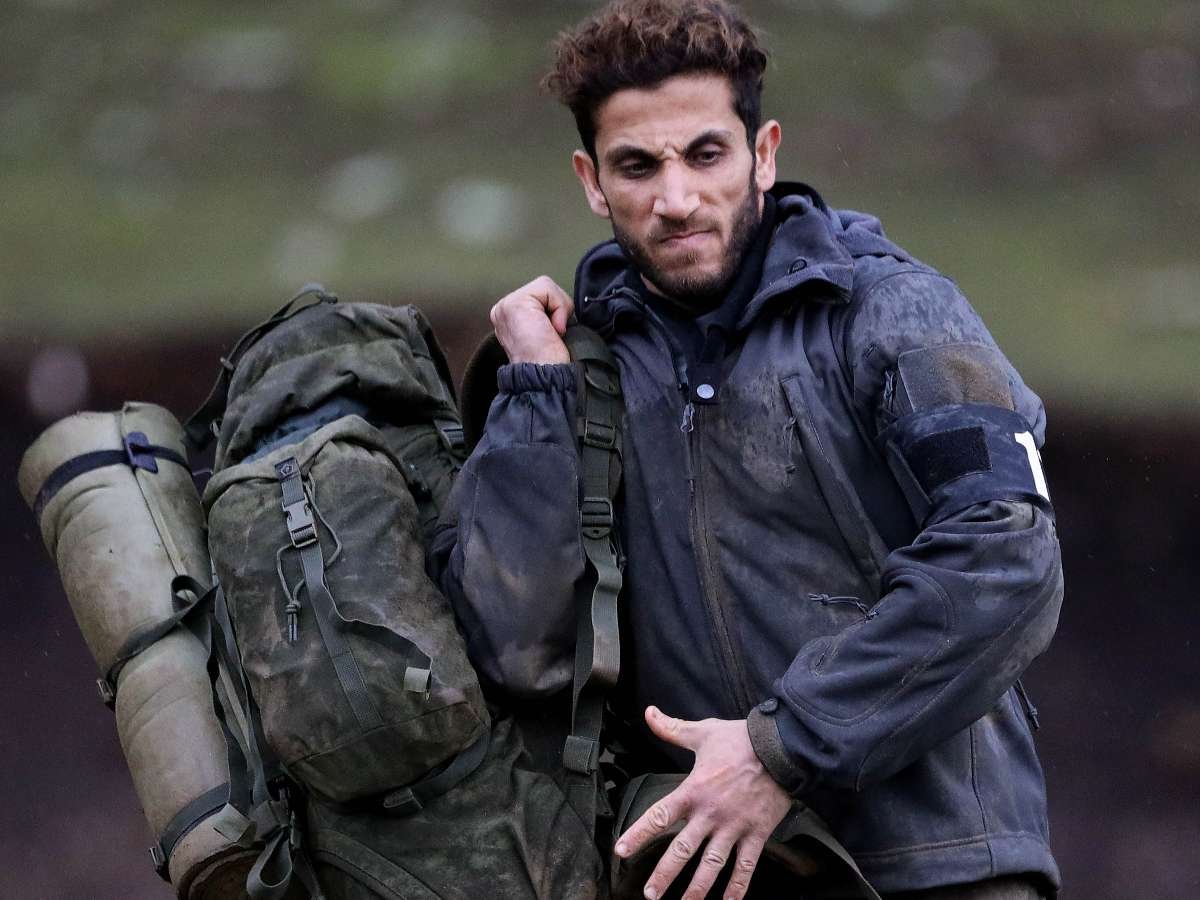 “During my recruitment we had a guy doing drill and he was just awful, so he was getting punished. But that wasn’t sinking in for him, so instead they punished the rest of us. They had us doing laps of the field holding our weapons above our heads while he sat in the grandstand having to clap us on.

“It’s all psychological. And it works.

Is the SAS Australia accommodation similar?

"What you see on SAS Australia is pretty luxurious. You have the billy basics and that’s it. But when you’re in the Jungle Phase you don’t have any of that. You have to literally make your own bed."

How about the food?

"You’re given rations - sometimes fresh, sometimes not. It wasn’t tasty food, but all you really cared about was getting enough calories in you." 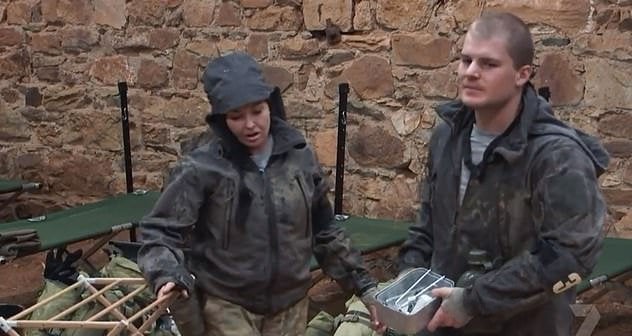 What’s morale like during these recruitment courses? Do you make friends?

“Within about two or three days you’re pretty well bonded. You all start with different expectations but after a couple days you realise you’re all in this s**t together and it’s f**king tough.

"Plus after those first few days you usually lose the d**kheads with attitude and the fellas that aren’t physically fit enough, so you know you’ve got the core folks left. That’s part of the course too - to build a team."

“When I went through P-Company recruitment, about three weeks in, I thought I was done. I thought I was going to die. There was nothing left. At that moment my mates pulled me through. And then two days later when one of them was seriously struggling, I helped him get through.” 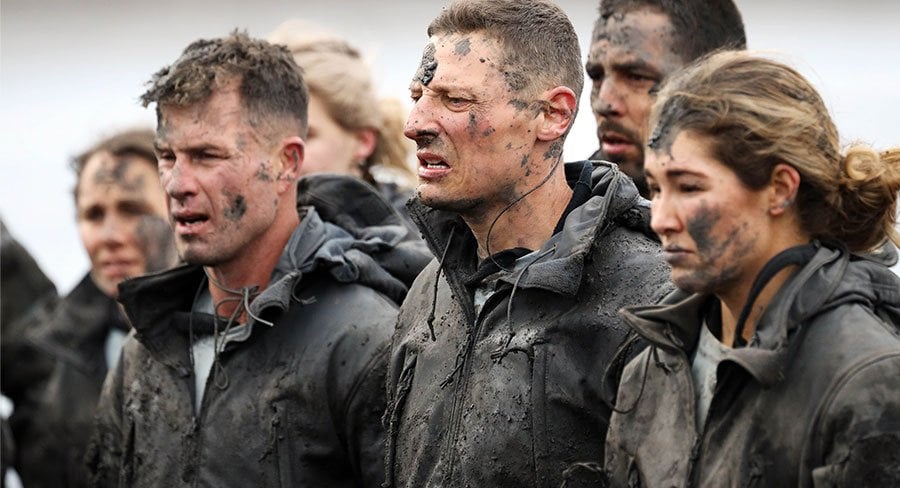 What was the best part of selection for you?

“The last moment of the last challenge. When we finished, I grabbed probably the largest, fittest and hardest man on the course and head-butted helmets together because he was in floods of tears. He broke just at the last minute.

“It was just so physical. Essentially nine months all up of intense pre-training and then doing the selection course itself, so the final task was pretty monumental - even though at that point I still didn’t know whether I had ‘made it’.”

That’s because even if you ‘complete’ the entire course, at the recruitment ceremony at the end of it all the ‘Staff’ can still decide to fail you. Which is. So. Bloody. Harsh.

What was the worst?

“Mid-way through the second week we had to do a task where we had to run around an oval filled with obstacles and each lap the first four in the race were able to stop - officially completing the task. I knew I wasn’t the quickest, so I thought I’d be strategic and save some energy for the final lap to get through to that top four. When I started the final lap I could just feel there was nothing left in the tank. I had to do that course seven more times.

“That was my lowest point physically and mentally.”

...We think we would have broken well before that point. Sweet Jesus.

So, as you probably predicted, the show is a little off the mark when it comes to reality, but perhaps that’s for the best - because we’re pretty sure these celebrities wouldn't have lasted very long.

“You’re taking untrained individuals who have left their very pampered lives, out of their comfort zone and putting them in a pretty testing environment - so I’m sure they got a taste of what it’s like, but if they went through the real process they would all VW within minutes. “