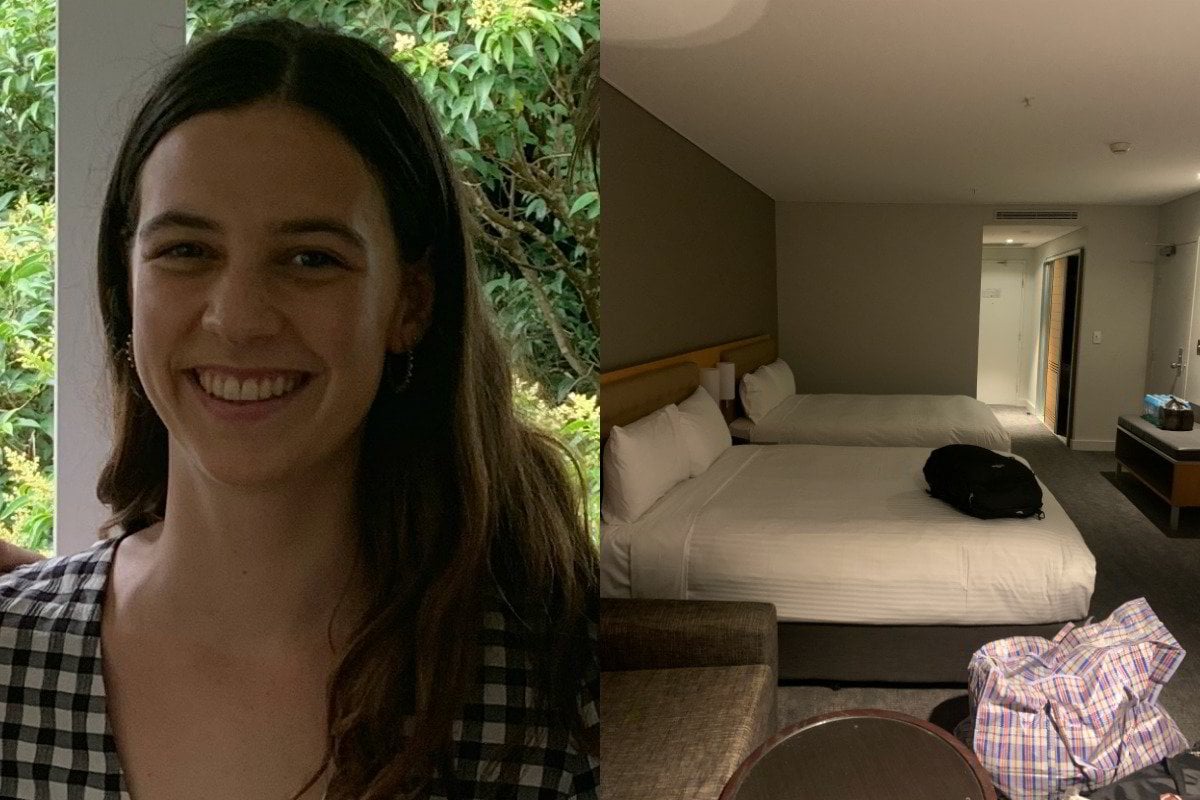 I learned of my first flight cancellation at the end of June. I was panicked, but my airline assured me that there were plenty of flights leaving Europe to get back to Sydney, so I re-booked another flight a few days after my original flight and thought nothing of it.

But two weeks later, it happened again. And another fortnight later, again. Suddenly, I was alone in Spain with no money, and no idea if I was ever going to make it home.

It became clear by the third flight cancellation that the reason for these cancellations was that I was flying economy,  and the only way I would ever make it home was if I upgraded my flight to business class, as those flying business class are less likely to have their bookings canceled.

As a penniless university student, I finally had to turn to my family to help get me home. I’m very grateful that I could.

I read countless stories of people that had been trying to return to Australia for months with no success and couldn’t afford to upgrade to business class tickets, meaning they were trapped overseas indefinitely. Reading these stories was both heartbreaking and infuriating.

How could the government make it so difficult for Australians to come home?

Finally, on August 21, after weeks of holding my breath waiting to receive a fourth cancellation email, I was able to catch my flight from Madrid to Sydney. I was so relieved to finally be going home, after seven months overseas, and almost two months of trying to get back to Australia.

But the drama didn’t end there for me. Getting through customs and out of Sydney airport took almost two and a half hours. We stood in lines for long periods of time despite being the only people in the airport. My fellow passengers and I were all surprised by how poorly run the operation was, considering they had been doing this for months.

Eventually, we were escorted out of the airport and directed to one of three buses. Because I have terrible luck, my bus led me to the notorious Travelodge Hotel on Wentworth Street. The whole bus groaned with disappointment and we were escorted inside.

My room, while dated and not impressive, was not one of the horrifying ones that everyone has seen and read about. The fridge had a strange smell and the shower door didn’t quite work, but I just accepted that I wasn’t staying in one of the ‘nice hotels’ and would just have to put up with it for the 14 days. 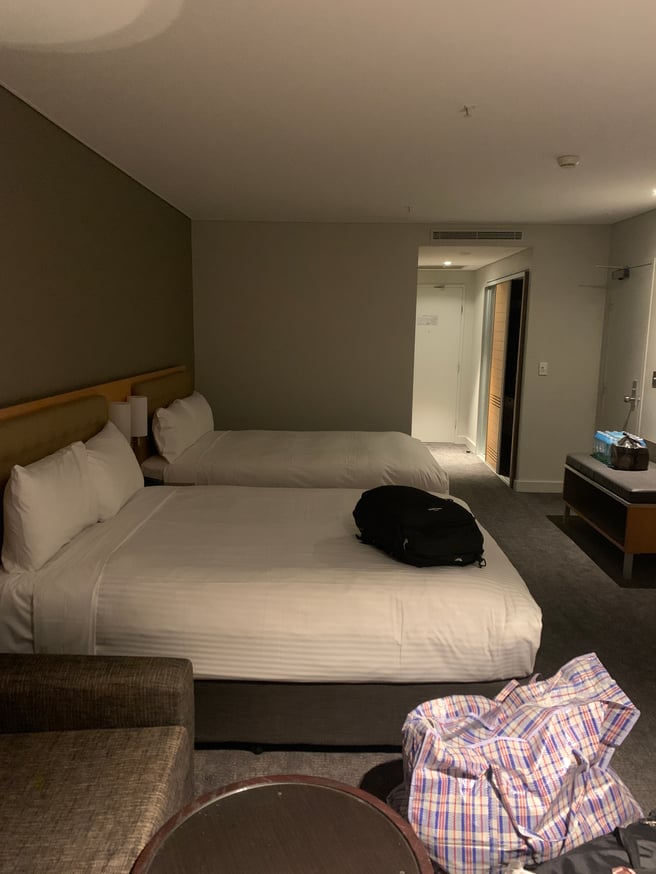 But the worst was the food.

On my first day, I called multiple times asking about breakfast. Reception apologetically explained that the catering company was running late and I would have food by 10am. At 12pm, my breakfast arrived: an orange, a stale muffin, a bag of cereal, and a litre of milk. 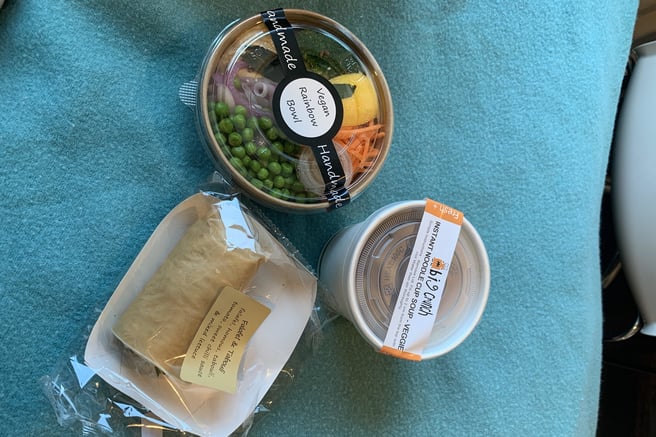 But on Tuesday night, which would have been my fourth night at the Travelodge, a police officer came over the loudspeaker. He explained that we would all be moving to new hotels and we needed to pack up our things and be ready to go.

He offered very little explanation as to why we were moving, which made me very nervous. I tried to call reception to find out more, but they didn’t pick up the phone. I actually found out what was going on by reading an article on my phone.

Three and a half hours later, I heard the army finally start collecting people from other rooms on my floor of the hotel. They loaded us onto the bus where I was reunited with my fellow passengers from my bus trip to the Travelodge on Saturday night.

Mamamia's daily news podcast, The Quicky, speaks to Priscilla Jackman who was quarantining at the Travelodge Hotel in Sydney's Surry Hills. Post continues below.

We all laughed about the situation and exchanged stories about our experiences whilst inside. A couple on the bus told us that they would only ever get one tea bag or one bread roll for the two of them, and others shared that sometimes the catering company simply wouldn’t deliver meals to their rooms. I feel I was one of the lucky Travelodge guests.

We pulled up at a much nicer hotel, and we all sighed with relief. The hotel director was very sympathetic to our situation and handled the whole debacle incredibly. The defence force escorted me up to my room, which is a big improvement from where I’d just spent the last three days. 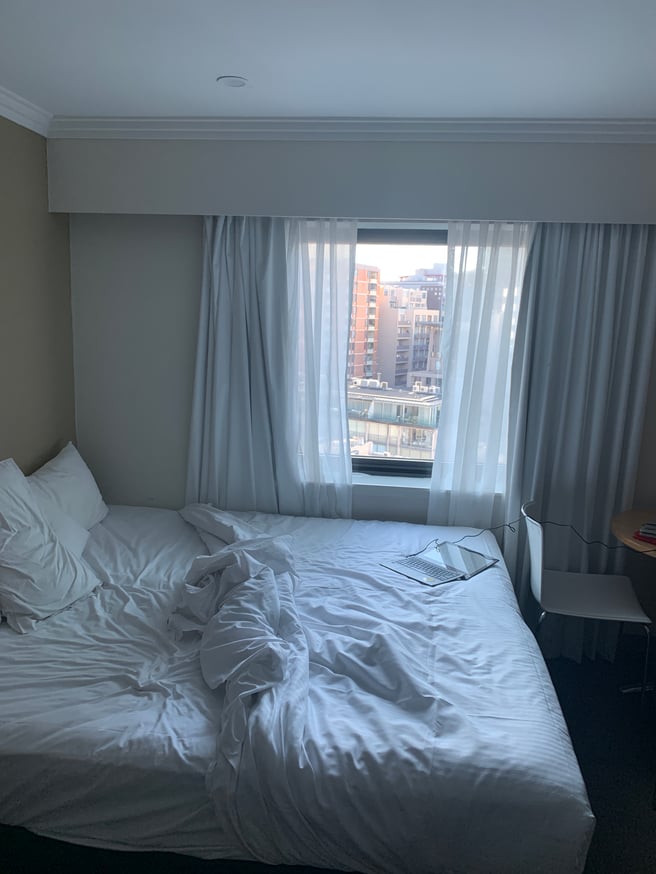 I’m now on day five of my hotel quarantine experience and so far my new hotel is a dramatic improvement. I spend my days on Zoom calls for uni, doing puzzles, and watching TV.

Occasionally, I even get a visitor waving to me from the road! I’m doing my best to remain productive and keep positive in this crazy time, but I’m extremely grateful to be back on Australian soil.