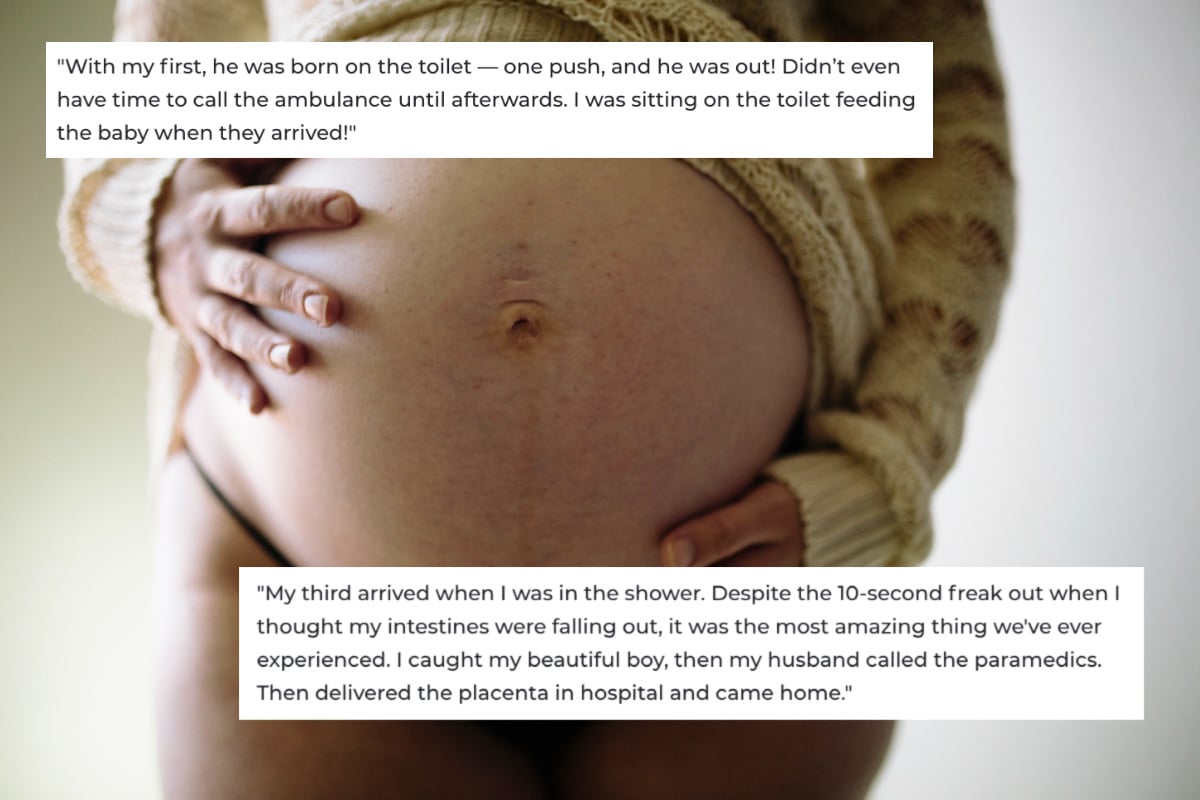 Last week, Australian fitness and health influencer Emily Skye gave birth to her second child. But it didn't exactly happen in the way she was planning.

Before she even had the chance to get from her home to the hospital, she was on the floor, giving birth to her newborn son, Izaac.

Well THAT was unexpected!! 😱😲🥴 ⁣⁣ Little Izaac just couldn’t wait any longer to enter the world!!⁣⁣ ... I’ll share with you our birth story soon!! Be ready, it’s a wild one! 🙈⁣ ⁣ ⁣ #birthannouncement #babyishere

And while she hasn't got into the specifics of how the birth went just yet, it did spark some conversations between women who have also experienced unexpected home births.

WATCH: Questions about childbirth (asked by mums and non-mums). Post continues below.

"My third arrived when I was in the shower. Despite the 10-second freak out when I thought my intestines were falling out, it was the most amazing thing I've ever experienced. I caught my beautiful boy, then my husband called the paramedics. I then delivered the placenta in hospital and came home."

"My three-year-old and one-year-old were asleep in the next room the entire time. I dreamt about it for such a long time after. In fact, I still do occasionally. We're so proud of our little water baby. It was such an awesome thing for us to experience as a couple. My baby turns five next month, but it feels like yesterday!"

"My second was born in the bathroom! I'd been in labour for a while but didn't want to be turned away from the hospital, so I was waiting until I couldn't manage the pain. It was a scary experience but pretty amazing!"

"I went into labour with a big kick from my baby that required me to get out of bed and go to the toilet. This is when my waters broke. At this stage, I had not had any contractions. I told my husband we needed to start the process of going to the hospital, because this was going to be a quick birth. (In the past, I had been fully dilated and at pushing stage before my waters broke.) My husband rang for the babysitter to come and woke up the two children that had decided to come to the birth with us. He rang our private midwife, but she didn’t answer.

"My husband started taking the car seat out of car to swap into my babysitter's car. In the minutes he was organising this, my contractions started and were about one-minute apart. At this stage this was not a real issue, as with my five other labours I am often fully dilated when I get to the hospital but will be in the pushing stage for up to an hour. I began strong close contractions and said to my 12-year-old daughter India, 'Go and get your dad... NOW!'

"At this stage, I knew the baby was coming at home. When Ivor (my husband) came in, I told him to ring an ambulance. But I didn’t mention that I did not think I would make it to hospital. (It’s hard to communicate all your thoughts during contractions.) He rang the hospital who told him to ring an ambulance, which he then did. When he came back I said, 'I am having the baby here.' He did not believe me.

"It was at this point he took a look, and with the head crowning, he had the realisation that we were having this baby at home. The paramedics on the phone talked him through it all. He had to clear the cord from around her neck, and she was born after a couple of pushes into her father's arms.

"My niece (our babysitter) and our daughter were jumping up and down at our bedroom door, crying and saying, 'It’s a girl, it’s a girl'. I said, 'Is it? I haven’t looked!' Apparently from the moment she was born I referred to her as she so they assumed I knew. I looked and we did have a little girl."

"I had an unexpected car birth 15 years ago. It was the best birth of my four children because it was fairly dark and it was just my husband and I there. It was also pretty quick and very intense, and my third child, so I wasn't panicking about it. It was my husband's first child, so he was naturally pretty stressed. The ambulance arrived 10 minutes later and took me to the hospital. It was an experience I'll never forget."

"My first child was induced, so I hadn’t experienced going into labour at home. With my second child I started getting the first labour pains at bedtime on the due date, so I did what I had read in a book (Birth Skills) and went to bed to get some rest. I dozed on and off and at about 2am I woke and started timing the pains on my phone. They were stronger, but nothing crazy, and were close together.

"The light of my phone woke my husband and I told him the pains were getting worse. I called the hospital and I spoke to a midwife. She asked me a bunch of questions and then told me if my waters broke or if I had three lots of strong contractions in a 10-minute period to call back. My instinct was that I wanted to go to the hospital then, but I felt like the midwife must know better, so I stayed in bed. My husband rang my mum while I was speaking to the midwife, so she would be prepared to come and stay with our two-year-old. Not long after, my water broke and the pains got very intense.

"I was still laying down and called the midwife to say we were coming in. My husband grabbed me some pants to wear to the hospital — as my waters had broken — and I felt like I needed to go to the bathroom.

"But when I got to the bathroom, I felt like I needed to push and yelled for my husband to come back quickly. I told him the baby was coming and I didn’t think we’d get to the hospital. He called an ambulance, and they told me to lay down. They started to talk my husband through what to do, and they said an ambulance would be on the way.

"I think that’s when my mum arrived and when she saw what was happening, she was shocked. The baby was coming and mum held my hands and my husband was directed by the 000 operator. He was born with two pushes and my husband helped deliver him. The adrenaline must’ve stopped me feeling any pain when he was delivered."

"With my first, he was born on the toilet — it was just one push, and he was out! I didn’t even have time to call the ambulance until afterwards. I was sitting on the toilet feeding the baby when they arrived!"

"I was two weeks overdue with my third son, so I went to the hospital at 11pm. The nurse said she couldn't be bothered working, and she told me, 'You're not even 1cm dilated, you have ages to go. See you in the morning.' I could barely walk to the car. Once I got home, I went to bed and just breathed through it. I could feel the contractions getting stronger and then I suddenly had that need to push. My husband at the time called 000, and they talked him through it. Then, my son was born at about 1am.

"It was so painful. I thought I was going to die but I just had no choice but to brace myself. I was apparently really calm and just breathed through it. I had my in-laws come into my bedroom first and my father-in-law began throwing blankets at me. Then, my second son came in and thought I was dying, so he was taken out screaming. The ambulance also had no idea what to do. They were all shocked.

"By 4am I was getting monitored at hospital to be home again by 11am that day! It was so full on."

"I had a house full of visitors, it was mid-afternoon and I felt 'off' so I went to run a bath. After about 10 minutes I thought, 'F**k this hurts.' I told my husband there was absolutely no way I was going to hospital in my pyjamas, then I felt the head, and my husband delivered her a few minutes later. He then yelled at someone to call an ambulance, at which point my mother thought I was being overly dramatic, until she came down to find us with a baby! About 20 minutes from feeling off to her being here... insane."

Have you experienced an unplanned home birth? If so, tell us about it in the comments.