It was July 1999, when a teenage girl with long brown hair and a sprinkling of freckles on her nose and cheeks, walked out of her family home and shut the door behind her.

Hayley Dodd was 17 years old and she’d decided she wanted to go on an adventure.

Hayley’s parents did not know it at the time, but she had a plan. She was going to meet up with one of her closest friends, Lisa, and then hitchhike from Mandurah, in the south of Perth, to Dongara, northwest of Perth, to hopefully work as a labourer on a shearing team.

The two girls were staying at a caravan park in the time before they began working, when one night Hayley decided she wanted to visit friends in Moora.

The town was about 200 kilometres away, and Hayley was going to hitchhike there.

“Hayley was happy, excited, looking forward to it,” Lisa would later report. “She told me she was coming back.”

Lisa gave her a small pocket knife in case anything went wrong, and with a “kiss and a cuddle” said she’d see her when she returned.

She was first picked up by a truck driver who dropped her at a service station in Badgingarra, a town on the way to Moora. He described her as “happy and bubbly,” and remarked she looked about 14 years old.

Passersby saw her walking along North West Road, just before 11:45am. And then no one ever saw her again.

For 14 years, there were no answers. The police had their suspects, but no solid leads.

LISTEN: Kathy Kelly lost both her sons, and speaks to Mia Freedman about grief on No Filter. Post continues below.

Then, in late 2013, there was a development in Hayley’s case.

A man named Francis Wark, who had long been a person of interest, was known to have owned a property near where Hayley went missing and had since been serving a 12-year sentence for physically and assaulting a 31-year-old woman who he picked up in Queensland.

Immediately following Hayley disappearance, police searched the car Wark had been driving – an old ute borrowed from a friend.

They had found a seat cover, which they packaged and sent to a forensic laboratory. Until September 2013, that seat cover had gone unexamined.

It wasn’t until the cold case was reviewed, and the seat cover searched, that the police found something embedded within it.

One of Hayley’s earrings.

The distinctive earring was an Egyptian ankh shape that Lisa had provided a detailed drawing of in 1999.

Wark was consequently charged with Hayley’s murder, but plead not guilty.

Before the trial had even begun, Margaret Dodd, Hayley’s mum, had no doubt Wark was the man responsible for Hayley’s murder. In 2015, while he was in jail serving his sentence for a different assault, she decided to write to him, begging for answers.

I hope you don’t mind me referring to you by your Christian name, writing this letter is extremely difficult for me, but I feel I have no choice but to do so.
Firstly I would like to say I forgive you for what you have done, but that would be lying as I just couldn’t possibly bring myself to do that nor shall I patronise you and show any empathy for your situation.
Secondly there is no way I can possibly try to comprehend your actions towards women, maybe this stems from your relationship with your alcoholic mother and affected you in a different way than it did your brother and sister, who knows. You are the only one who knows what you feel and what made you take the path you have chosen.
After thinking you were in the clear for 14 years, it must have come as a shock to be found out, I am fully aware of what the police have, and the case they intend to build against you, but this is not at the top of my agenda, bringing my daughter Hayley home is, and the only thing that is important to me, whatever happens after that is between the police and you and means little to me.
Whatever your feelings are towards women, can I just remind you that Hayley was not quite a woman yet, she was an innocent 17-year-old teenager, a trusting and gentle soul who would do no one harm.
I shall not describe the pain and suffering that has been inflicted on our family by Hayley’s disappearance, murder and forever searching for her remains, as you probably don’t have much empathy for our situation.
So are you going to tell us the location of Hayley so we can bring our daughter home and give her a Christian burial, surely that is not too much to ask of you? Will you do the decent thing for yourself, Hayley and our family?
All we want is to bring our daughter home were she belongs.
Trusting I hear from you soon, and you tell us where Hayley is,
Margaret Dodd
Mother of teenager Hayley Marie Dodd.
This letter has been written ‘without prejudice’.

It seems a small request, given all that Margaret has lost.

She did not receive a response.

What followed was a two-year ordeal that seemed to punish the family far more than the alleged offender.

Court time, she explained, made the family “edgy”, and required them to travel long distances and pay for their own accommodation.

Margaret is the full-time carer of her husband who lives with crippling arthritis.

“It’s a Catch 22 really,” she said regarding the possible discovery of what happened in the final hours of her daughter’s life.

“Because knowing what happened will stop your imagination running through what you think happened.

“Whereas knowing what happened can also devastate you because it’s horrific.”

The evidence presented throughout the trial was compelling. There was, of course, the earring. There was also Wark' history of picking up lone female hitchhikers and physically and sexually assaulting them. There was the timeline, with the state alleging that Hayley entered his car between 11:40am and 1:36pm in Badgingarra. Wark had been on his way to Perth.

But there were some unusual details about what happened when Wark arrived in Perth. He had not packed any toiletries, or unpacked his groceries, which the state claimed was evidence Wark was in a hurry.

On January 21, 2018, Wark was found guilty of murdering Hayley Dodd in the WA Supreme Court, and handed a life sentence.

He showed no emotion as his sentence was handed down.

Supreme Court Justice Lindy Jenkins told Wark, “By your actions after you murdered Ms Dodd, her family has been denied the opportunity to give her a decent burial,” thus prolonging the pain and suffering of Hayley’s friends and family.

But then, two years later, Wark's conviction was thrown out. The WA Court of Appeal ruled that the judge had made an error of law in finding him guilty, by discounting his alibis due to a lack of evidence.

A retrial was ordered.

And for the second time, Margaret Dodd turned up to court everyday.

This week, after lengthy deliberations, a jury acquitted Wark of murder, but found him guilty of the less offence of manslaughter. We cannot know their reasons, but the charge of manslaughter suggests they weren't satisfied he had intended to kill Hayley.

Wark, who maintains his innocence, continues to refuse to reveal the location of Hayley's body.

In March 2018, Margaret Dodd had 'no body, no parole, laws passed by WA Parliament. That means that Wark will not be granted parole, until he tells the family where Hayley's body lies.

"There are times when I just want to get on my hands and knees and dig," Margaret told Mamamia in 2018.

All she wants is to know where her daughter is - a girl who will forever in her mind be 17 years old. 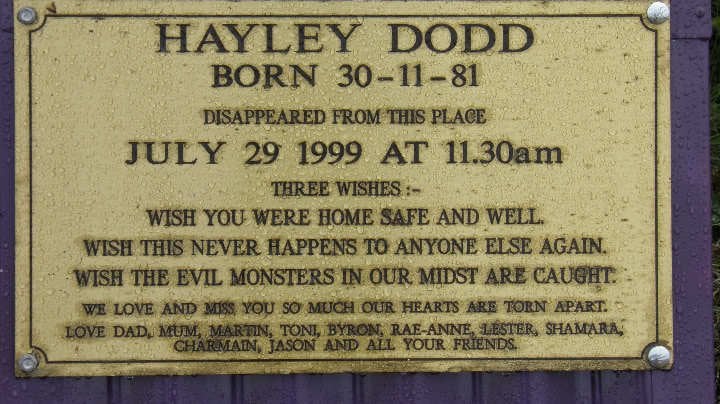 "You feel as though something is going to happen today," she said.

"I can remember when it was only five years, and I was looking at other people [whose child had disappeared] where it was 20 years, and I'm thinking 'how on earth does a family go through that?'"

And yet, the years rolled on, with 2021 marking 22 years since Margaret saw her daughter.

"People say time heals. No it doesn't. You just learn to live with the hurt.

When asked if Wark's 2018 conviction offered her any closure, she responded, "Closure, I have no idea what that is, it certainly does not apply to us.

"We have to carry this until the day we die. I am relieved that a murderer will not be on the streets to possibly re-offend, but besides that our life is the same, still waiting to find our daughter and bring her home so we can give her the farewell she has a right to, and is being denied.

"No real support is afforded to the victims and their families," she added, "well, at least that is my experience."

Nothing will bring Hayley Dodd, with all her hopes, expectations, fears and potential, back.

But to give her eternally 17-year-old daughter a place to lie in peace, where she can be visited and remembered by those who loved her, would be - at least - an act of dignity.

That's all Margaret Dodd wants from the man who murdered her daughter.

An answer to the question she has asked everyday for the last 20 years:

Terrible tragedy. And her mother was a One Nation candidate in WA's State election early last year, fell out with Hanson and quit her candidacy. She appeared on the 4 Corners episode http://www.abc.net.au/4corn... along with others telling how Hanson and Ashby ruined the party and how the party fell apart. I hope somehow that she finds her daughter's remains. To not know where they are must be the absolute worst feeling. Problem is, by the time he gets out even with parole he'd be in his 80s anyway, so he probably won't get out alive and he knows it, so he has nothing to lose.

Oh I feel for all the victims & their family’s! “No body, no parole” is one of those things that just make bloody sense!!!

indeed, and it should be taken further, with no privileges at all beyond basic human rights to nutrition and sanitation unless and until they cooperate. People like this don't respond to kindness and hand-holding, only a metaphorical stick. It must be deeply unpleasant, it must ''hurt'' and they must see real advantage in cooperating to themselves before they will.

These vermin who refuse to say where bodies are buried and hang onto important information need to have it extracted from them before any form of privilege or parole or anything at all is extended to them.