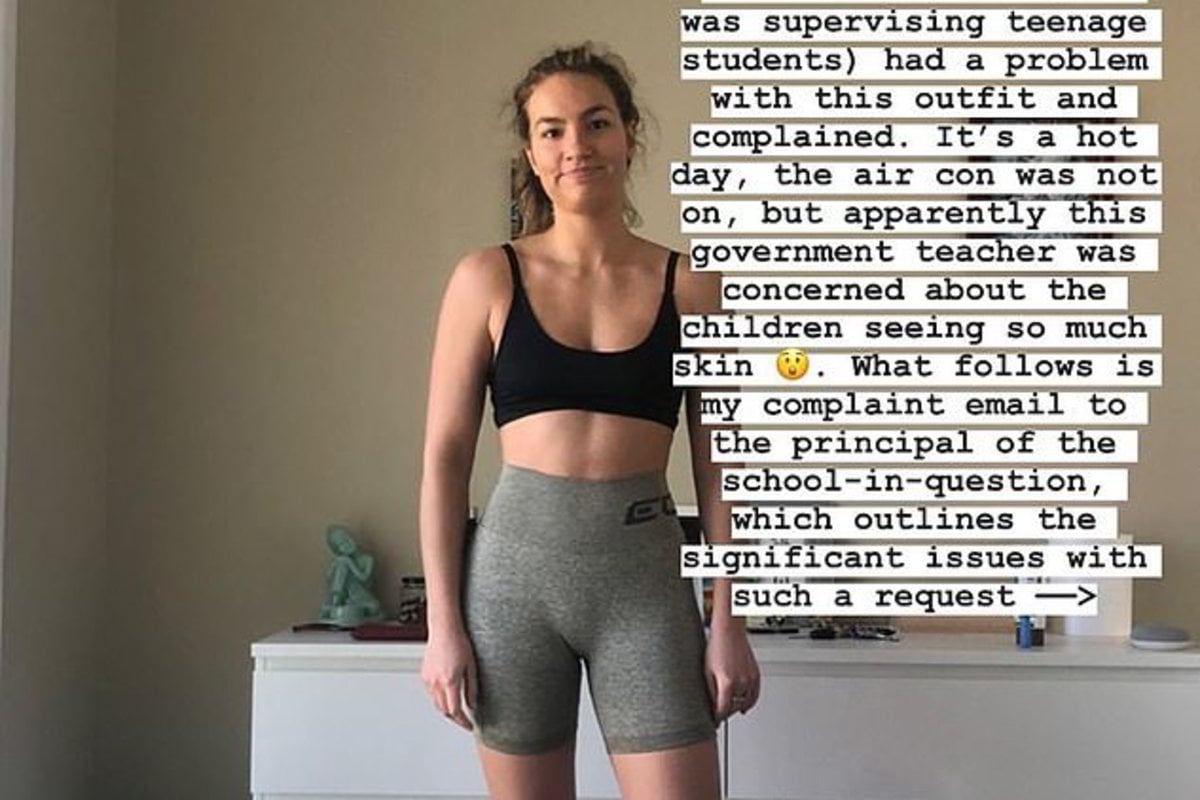 Earlier this month, I was at my local gym, where some schoolkids were also using the equipment, when I heard my name called from across the room.

I had a sinking feeling as I walked over to the gym owner and resident house-mum, Lucy*. Had I not been cleaning the equipment well enough? I’d been remembering both the detergent and the disinfectant, hadn’t I?

‘Sweetheart, I’m going to try to say this gently, but we’ve had a complaint from the teacher of the schoolkids, and… are you wearing a g-string?’

My face felt hot, and dumfounded, I replied, ‘Yes.’

G-strings are all I ever wear, they’re comfortable and I like having no lines underneath my clothing. Wait, this is INSANE. Why am I defending my underwear choices to the gym?

But she was still talking.

‘…Because she thought maybe you were wearing a g-string on top of your shorts.’

Huh?! Oh. It must be my scrunch-bum shorts. But people wear these to this gym all the time!  And anyway, if I want to dress like a superhero at the gym, I f*cking will.

‘Hun do you have something else you could change into? Something in your gym bag?’

‘What about a towel, do you have a towel you could tie around your waist?’

‘I think it would be difficult to deadlift in a towel.’

‘Or… how far away is home? Could you maybe go and get changed?’

‘I’m sorry sweetheart. I’m trying so hard to be gentle and not hurt you, but it’s just because there are young boys here. Fourteen years old. Just out of primary school.’

‘I really hope you’re not hurt Gabi, I was really trying to be gentle.’

‘I’m not hurt Lucy, I’m just really disappointed with the message that that teacher is sending the boys. The fact that a grown woman would be asked to change in order to prevent boys objectifying them teaches them the wrong thing.’

In my outrage, I couldn’t find the words I needed to effectively communicate the deeply problematic messaging those impressionable teenagers were receiving from their teacher and the gym.

‘Well it’s not really for the boys, it’s for the girls.’ 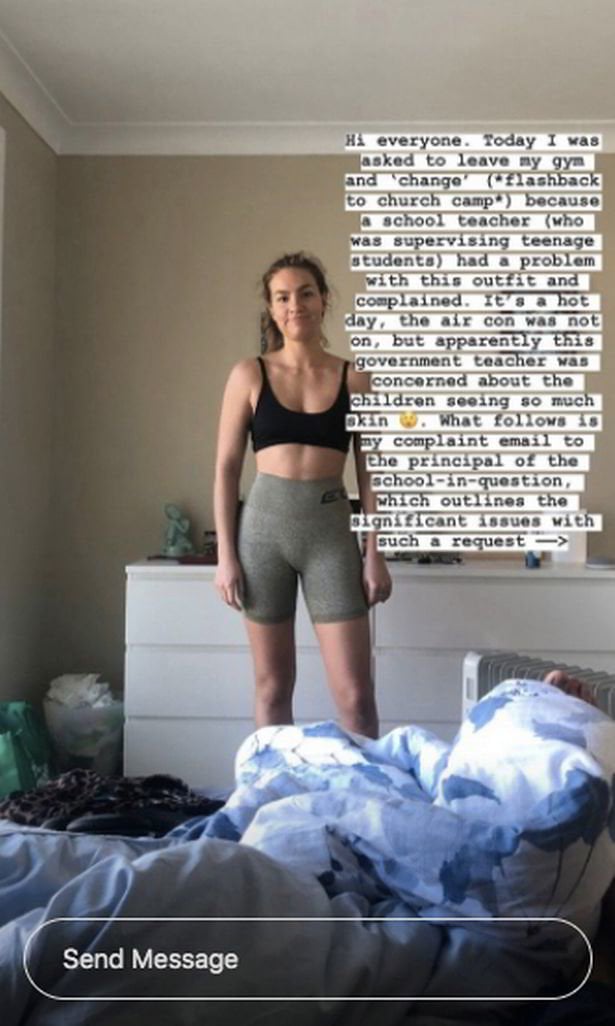 The story was changing, but I didn’t get a chance to point it out (the kids were filing out of the gym - ‘saved by the bell! You can keep working out after all!’), nor to point out that whichever gender they were trying to protect from my scrunch-bum shorts, the result was the same: perpetuation of rape culture.

Sound extreme? Here’s how it worked in this situation:

Those kids deserve better. Knowing that they deserve better, I sent an email to the principal of their high school. It would have been easy to let this slide; after all, women have been socialised to be nice and do what we’re told. I’m sure everyone involved thought I would just fall into line. Women don’t kick up fusses.

What followed my email was a response that added a layer of confusion.

"I’m sorry that this matter has caused you distress, but I understand from my investigations that this incident was not instigated by our staff," the principal wrote.

"The matter is between you and the gym management. I have received a report from the teachers who were there yesterday. I have also spoken to the gym manager who spoke to you yesterday to get her perspective."

The confusing part was that the principal seemed to be saying that the teacher didn't complain. So if she didn't, who did?

I set up a meeting with Lucy, and I brought along a witness, my brother Sam; my sounding board, who also happens to be a member of the male sex (it doesn’t hurt to have a boy present if you want to be believed).

What follows is an abridged version of the conversation I had with Lucy, to get to the bottom of what had actually happened.

For context, an Instagram post I had shared about the situation at the gym had already gone viral by this point, and I wanted to write a story about it. However, I needed all the facts.

Lucy began by saying: 'I’ve spoken to my daughter, who has a university degree and understands the matters you were telling me about, and has explained what you believe to be true around these issues, and these ideas are all new to me. I don’t have a university degree like you do.

‘So I’m sorry, if I had realised that the scrunch-bum shorts you wore were to help with your powerlifting and range of movement, I wouldn’t have asked you to change.

‘And if you’ll remember, I did say you were saved by the bell, and that you could stay, as soon as the kids started to leave. The other thing is that I couldn’t control the girls - the girls were all up the back corner hiding and giggling and pointing at you...'

'I don’t remember that,' I said. 'The girls looked like they were mostly standing or sitting around the gym.'

Sam interrupted. ‘It’s upsetting he implied you lied about the complaint.’

‘First of all I will say that the truth is the only thing that matters to me,' Lucy said. 'It is all that matters.

‘So the school principal contacted me and I explained that I couldn’t control the kids, so I went up to the teacher and I said “is this appropriate?” I couldn’t say anything to you without her opinion on the matter - '

That's when I realised I had been lied to initially. It was never the teacher who had the problem... but Lucy.

‘I’m here with you now trying to figure out exactly what happened because I want to behave with integrity,' I said. 'And now you’re telling me I’ve already misrepresented that teacher because I took your word for it when you told me that a teacher had complained.’

‘I don’t lie and she did complain–’

‘What did she say, exactly?’

‘That’s all that was said?’

‘But I don’t think you’re being fair, I don’t think it was the teacher’s fault, I think you need to be very careful what you say and do. If you had simply waited rather than storming off - '

It felt like Lucy was back-peddling in order to protect the teacher, not realising that the purpose of my visit was to protect Lucy and her gym because I had believed that the principal was shifting all blame onto her.

‘Lucy, please think very carefully, what did you ask the teacher and what was her reply?’

‘I just asked if it was appropriate and I think she said, “no it's not.”’

‘Right. So, what specifically were you asking the teacher - what was inappropriate?’

‘Your outfit. I said ‘do you think that outfit is appropriate? Because I can’t control the girls.’

As the conversation was wrapping up, Lucy reiterated: ‘Like I said, I did not know that those shorts served a practical purpose - '

But that had always been beside the point.

Ultimately, the experience was a lesson that not every situation is as it seems. My story had been shared on the other side of the world, but it had never been the teacher who complained in the first place.

It was also a lesson in internalised misogyny. Women often police each other, because we've adopted the views of the patriarchy that our bodies and what we dress them in are public.

This isn't about any individual - but a culture that says women's clothing choices are up for debate.

They're not. No matter who is complaining.

*Names have been changed to protect anonymity.