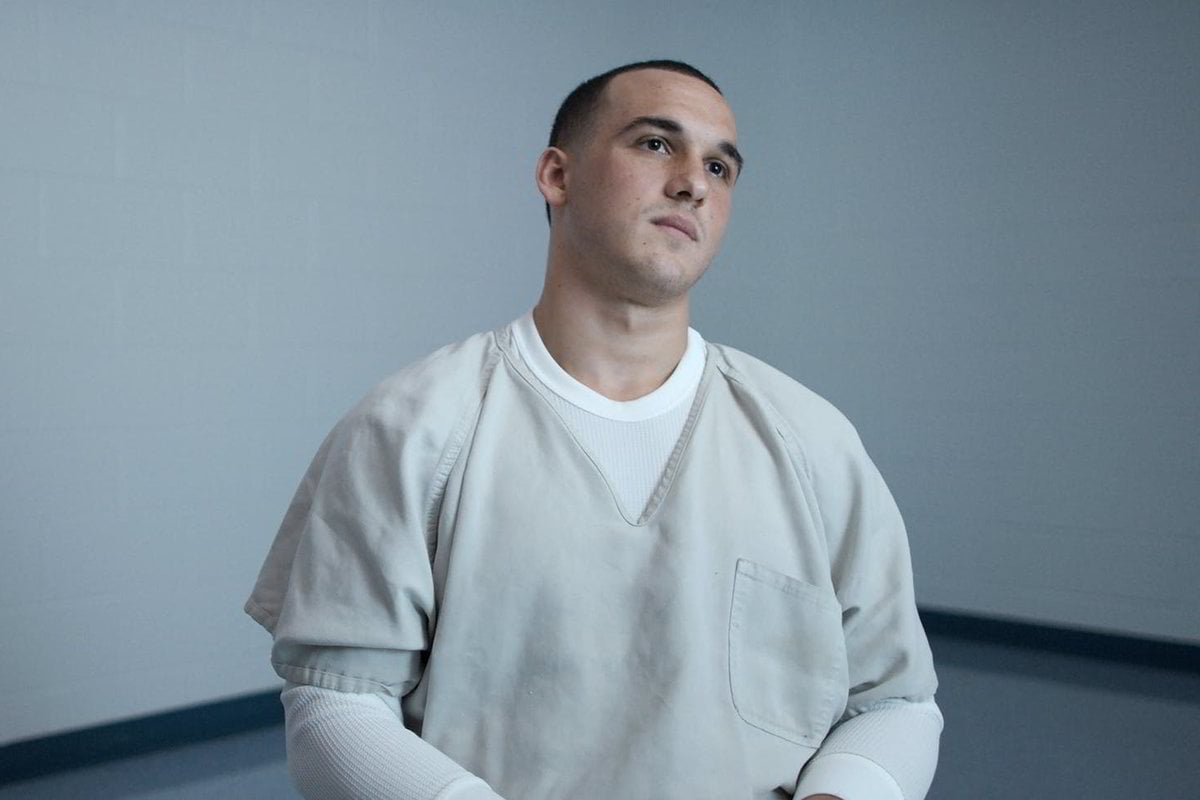 Greg Kelley was a high school football star with a loving girlfriend who was close to achieving his dream of attending the University of Texas on a scholarship. Then he was accused of molesting a four-year-old boy and his life fell apart.

Kelley, whose story is told in the Stan docuseries Outcry, was just 17 when the accusations were made. A high school student in Cedar Park, Texas, he’d been living with the family of his friend Johnathan McCarty while his parents were unwell.

His father, Douglas, had suffered a stroke and his mother, Rosa, had a brain tumour, and both needed to live near a hospital for treatment.

McCarty’s mother Shama ran a daycare from their home. In July 2013, a four-year-old boy at the daycare told his mother that “Greg” had molested him. Kelley was arrested. But could it have been a case of mistaken identity?

“From the first day, in my heart, I knew he didn’t do this,” Kelley’s girlfriend Gaebri Anderson told the New York Post earlier this year.

The police investigation, led by Sergeant Christopher Dailey, was flawed from the beginning.

At the time the assault was alleged to have happened, Kelley was no longer living with the McCartys. He’d moved out the previous month. According to a lawsuit recently filed by Kelley, Dailey was told when Kelley had moved out, but had falsified the date so he could lay charges.

Two weeks after the first accusation against Kelley, police reported that a second four-year-old boy had accused Kelley of molesting him.

Questioned later in court, the child once again said Kelley hadn’t touched him.

Kelley was offered a deal – plead guilty and avoid jail but be placed on probation and register as a sex offender. He refused to take the deal.

“No, I am not playing this game because I am not guilty and God is all about t﻿﻿he truth,” he told his mother.

Kelley’s case went to trial in 2014. He and his supporters felt sure he would be acquitted. There was no physical evidence against him. He hadn’t been at the house at the time the assault allegedly occurred. But there was the testimony of the young boy.

In court, prosecutors said that Kelley had exposed himself, made the boy touch him and forced him to perform oral sex. They said the child stayed “steadfast” to his story, and “never wavers” as to who did it to him.

The mother of the boy testified.

"I was very emotional,” she said, remembering when her son had told her about the abuse. “You know, you don't expect your four-year-old to say something like that to you.”

Kelley’s defence lawyer, Patricia Cummings, tried to argue that the child was never molested, talking about “false accusations”. She didn’t suggest that perhaps the child had been molested by someone else.

Kelley was convicted of two counts of super aggravated sexual assault and sentenced to 25 years’ jail. His family and friends were in shock.

“This is a lie,” his mother Rosa said.

A construction business owner called Jake Brydon was sitting at home watching the news when he saw his former high school coach – Gaebri Anderson’s father – talking about the case.

“I know him to be a man of great character and he was always our leadership teacher in high school and taught a leadership class and I was like, ‘Why is he onscreen crying for a convicted paedophile?’” Brydon told Oxygen.

Once Brydon looked into the case, he became convinced of Kelley’s innocence. Although he’d never met Kelley, he put his own money into funding the legal battle to get his conviction overturned.

But if Kelley didn’t molest the boy, who did? And how could the child have got two people confused?

Kelley’s friend Johnathan McCarty was still living at home when the alleged abuse occurred, and had a number of absences from school around that time.

He had SpongeBob pyjamas, which the four-year-old boy had said his abuser was wearing. He looked so similar to Kelley that another child at the daycare had confused them, as a parent later claimed in an affidavit.

On top of all that, someone claimed in another affidavit that McCarty had told him, while smoking marijuana, “It was me, not Greg. I did that to the little boy.”

Kelley’s supporters said they’d tried to get to get Cummings to suggest McCarty as a suspect, but she’d refused.

It turned out that Cummings had previously represented members of the McCarty family in a number of cases.

Kelley and Anderson talked on the phone every day. They wrote each other love letters. Kelley learnt to draw, and would draw beautiful pictures for Anderson. Kelley encouraged Anderson to move to Los Angeles to study dance, which she did, flying home every second month to visit him.

Kelley’s mother and Anderson’s parents would visit him almost every weekend. On one of those weekend visits, Kelley asked Anderson’s father for his daughter’s hand in marriage.

Kelley made some friends in prison, but told E! News that he had to defend himself every day.

"When you're in there as a paedophile, you're already the scum of the earth," he explained.

Finally, in May 2017, District Attorney Shawn Dick announced that he had been given “credible” evidence suggesting that McCarty may have been involved in the abuse.

The case was re-investigated, and Texas Ranger Cody Mitchell testified that Cedar Park police had botched the investigation. He said there were three suspect﻿﻿s﻿﻿: Kelley, McCarty and an unnamed person. That third person had a prior arrest on a charge of indecency with a child and was also living in the McCarty house.

In August that year, Kelley was released from jail on a bond. He proposed to Anderson, and they married in January 2019, with Brydon officiating.

“All of the trials and challenges have made us into a stronger unit,” Anderson told the New York Post.

In November 2019, Kelley was exonerated. He addressed the victim’s family.

"The justice system failed me and you,” he said. “Today, I received justice while you remain failed. All victims deserve justice the first time around.”

So what about McCarty?

After McCarty was named as a suspect in the child molestation case, a woman came forward and said he had drugged and sexually assaulted her when she was 15. Last year, McCarty was sentenced to four years in jail after pleading guilty to unlawful restraint and drug charges.

In May this year, Kelley announced he was suing the city of Cedar Park, former police chief Sean Mannix and Sergeant Dailey for an “incompetent, bad faith and fundamentally flawed” investigation.

“All I wanted was a handshake, an apology and accountability,” he said.

Kelley is now a student at the University of Texas. In an Instagram post last week, he said he’d gotten his life back, but one thing was still missing – the game he loved, football.

Football Update: since I was released on August 22, 2017 I knew with absolutely no doubt that I wanted to play football again. In high school I worked incredibly hard to earn three division 1 full ride scholarships to continue my athletic career. The summer before my senior year all of my accomplishments were unjustly striped from me. I Went through a living nightmare and by God’s grace I have made it to the other side. I’ve gotten my life back, Married my best friend @gaebrikelley and is currently piecing my life back together. But something is still missing... the game I love and that still excites me is not apart of who I am. For 3 years it feels as if I have been practicing but have not been put in the game. I have been fortunate and blessed to train along side legends and athletes who I literally looked up to during my high school years, they have become friends. It’s been surreal and I always realize that not just anybody gets the opportunity to better themselves next to these pro’s. 🙏🏼 After I was exonerated I applied to the University of Texas and was accepted as a student. At that moment I knew I had accomplished 2/3 goals to get football back. A few short months later I tried out for the football team. Ran around, did some measurables and then awaited an answer to see if the last goal of being able to play again had been accomplished. I received an answer... “as of right now, there is no need for walk ons”. This crushed me, I had been training and preparing to come back and show every coach and every staff member that I am willing to do WHATEVER IT TAKES. I run on HEART and walk into every challenge expecting myself to be the hardest worker in the room... that’s what’s expected by people like me. I don’t want be given anything, I want to earn it. I WANT TO PLAY, MAKE PLAYS, and be a kid again.... I had to grow up so fast. I had to become a man really quick to survive prison. I don’t know what being a 20 year old feels like. As UT starts the season and I sit here... I don’t understand nor have received closure. But I respect their decision. I still want to play. Someone please give me a chance. In the mean time. I’ll be right here training.

Outcry dropped on Stan on July 5 and is available to watch now.