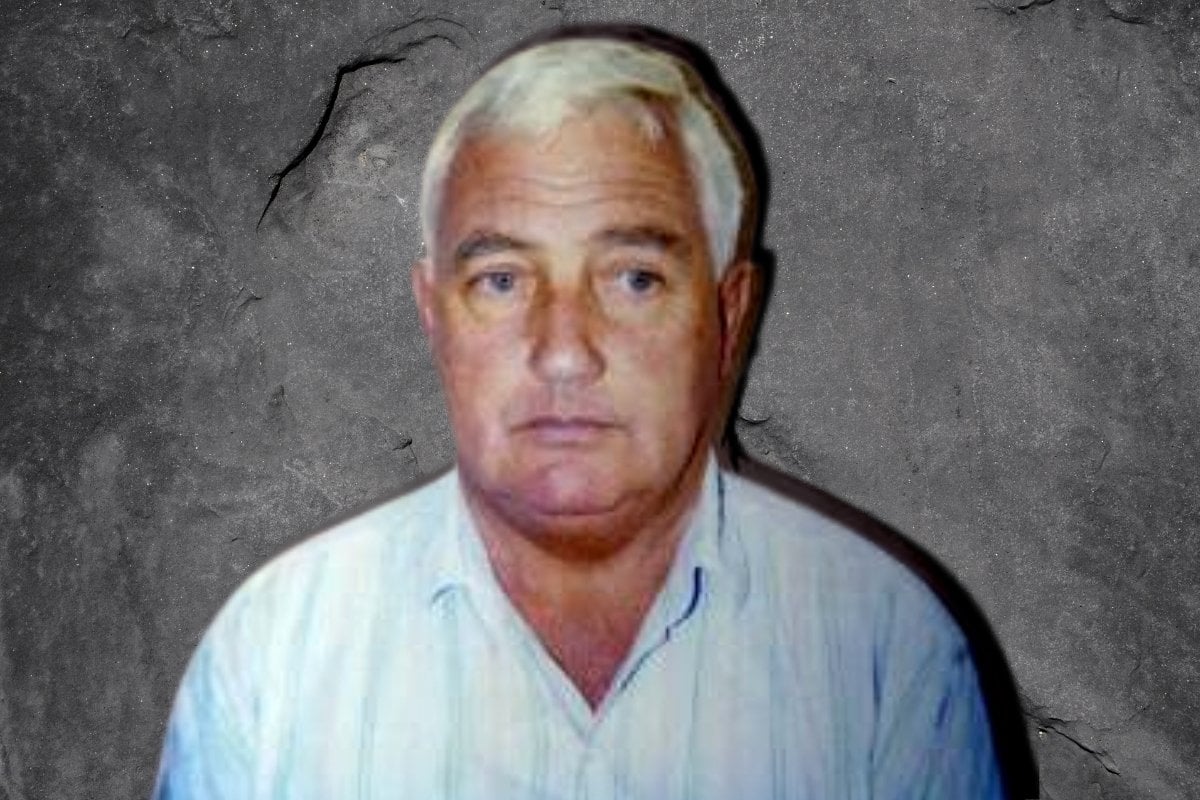 "Can I carry your bags, Madam?"

Dorothy Beencke, 78, was strolling home from her local shops in Sydney's Lane Cove when a man approached her. He was middle-aged, well-dressed, and appeared pleasant. A gentleman, it seemed.

The man lugged Mrs Beencke's groceries the remainder of the short walk down a laneway to her unit.

She offered him a cup of tea in return for his kindness, but he declined and went on his way.

Later that November 2 afternoon in 1989, down that same laneway, that same man bludgeoned 85-year-old Margaret Pahud across the back of the head.

The woman's body was found in a pool of blood. Her clothes had been rearranged, her shoes placed at her feet. Her handbag, stolen. It was the third time in eight months that elderly women on Sydney's north shore had been found this way.

And it wouldn't be the last.

"We were starting to believe we had a serial killer."

Former Detective Inspector Mike Hagan was among the police officers on the trail of the mystery murderer.

Speaking to Mamamia's True Crime Conversations podcast, he recalled the first time the 'granny killer' — as he'd been dubbed by the press — struck.

The victim was Gwendoline Mitchelhill, an 82-year-old woman who was beaten to death with a hammer at the entry to her Mosman unit block on March 1, 1989. Her handbag was missing, and investigators initially assumed it was a mugging gone wrong.

"The police had no eyewitnesses or any leads and there was nothing concrete. So there was no forensic evidence available at that time," Hagan said. "Good-intentioned neighbours thought that she'd fallen over, because initially, that's how it looked. So they washed down the crime scene acting in good faith."

Two months later, another body was found. Lady Winfreda Isabel Ashton, the 84-year-old widow of one of Australia's most famous painters, Sir John William Ashton. Lady Ashton was found dead in a bin alcove at her Mosman unit block. She'd been beaten, strangled with her own pantyhose, and robbed of her handbag.

"Here again, we've got a vicious assault, several weeks after the first murder, where money has been stolen out of her purse, and we say to ourselves, 'Well, is there a similarity between these two murders? What evidence is there to combine them?'" Hagan recalled. "We made the decision that these murders were connected. Basically, at that second murder of Lady Ashton, we were starting to believe we had a serial killer." 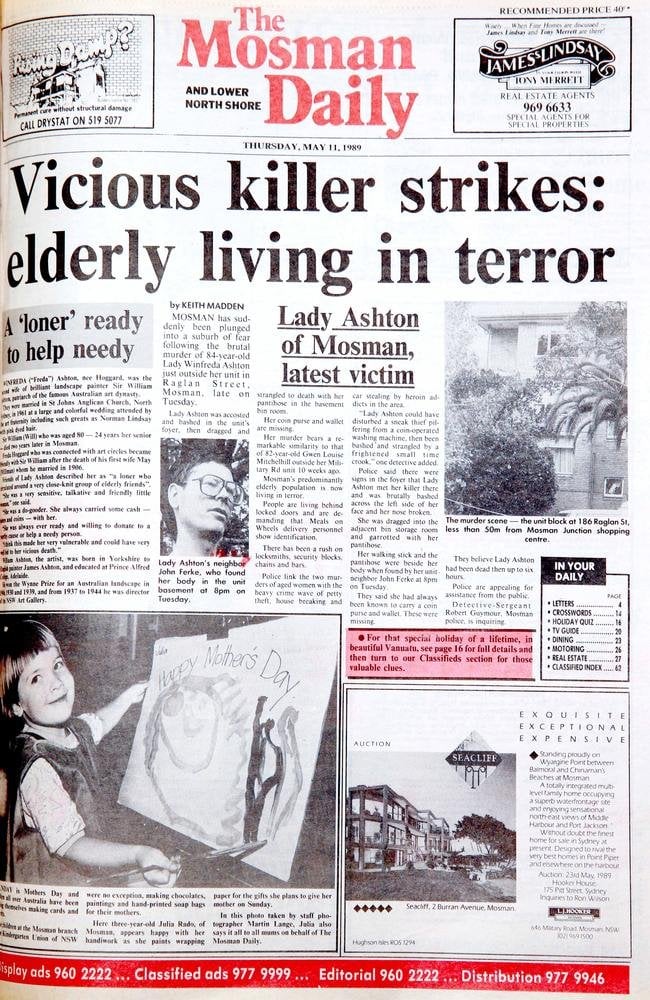 The murder of Maragaret Pahud appeared to confirm their suspicions. Then, just a day later, on November 3, 81-year-old Olive Cleveland was found dead on a pathway at her retirement village in Belrose.

Though roughly 14 kilometres from the earlier murders, there were clear similarities. She'd been beaten, strangled with her pantyhose, her clothes had been rearranged, her shoes placed by her body and her money stolen.

When the next call came, he recalled, a "solemn quietness" fell over his colleagues.

Ninety-three-year-old widow Muriel Falconer murdered in similar circumstances in her Mosman home. This time, though, it was a private house, and the scene had not been disturbed. There was a bloody footprint, and a description from a neighbour of a man seen in the area: grey-haired, middle-aged.

By then, a task force of roughly 80-90 detectives was working on the case, sifting through evidence and more than 700 suspects. But it wasn't until the new year that the case opened up.

On January 11, 1990, an elderly patient at Greenwich hospital reported that she'd been sexually assaulted.

In the course of their investigation, police contacted a salesman for a pie company who'd been in the hospital on business around that time. A married father named John Wayne Glover.

Yet prior to his scheduled police interview, the British-born man made an attempt on his life.

"This was absolutely alarming because all the police wanted to do was just to talk to him about: was he in the ward, did he see anything? There was nothing to suggest that Glover at that stage was the person who had touched this lady," Hagan said. "His reaction to the police involvement was absolutely unique and unusual."

Police visited Glover in hospital, where he consented to be photographed but declined to be interviewed. But his physical appearance matched that of the alleged 'granny killer' as well as an identikit sketch of a middle-aged, grey-haired man who had physically assaulted and robbed a number of women across Sydney's north shore in recent months.

"The two photos when we compared them were nearly identical. So at that point of time, this person, Glover, the pie salesman, became a suspect under surveillance," Hagan said.

Though the eyes of the NSW Police force were upon him, Glover managed to make one last kill.

It was a Monday morning. March 19, 1990. Glover was on his pie run in his company car, dressed in a suit and tie, carrying a briefcase, when he knocked on a door in Beauty Point, Mosman. A woman answered.

"It was a loving welcome at the front door with a real togetherness. And so those that saw it, believe that everything was okay. And so the idea was, he was still on his pie run," Hagan said. "We didn't really understand what he was doing there."

That woman turned out to be 60-year-old Joan Sinclair, a woman with whom Glover played bridge.

Hours passed, and Glover failed to emerge. Concerned detectives entered the home to find Sinclair's body in the hallway, laying in a pool of blood, pantyhose tied around her neck.

Glover was found unconscious in the bathtub, having made another attempt on his life.

The motivation of a serial killer.

At his 1990 trial, John Wayne Glover pleaded not guilty on the grounds of 'diminished responsibility'. In other words, the accused's responsibility at the time of the killing was substantially impaired by a mental disorder.

But the crimes indicated otherwise.

Listen: For more insights from Mike Hagan, including how the case affected him and his team, listen to True Crime Conversations. (Post continues below...)

"When he killed, he was also planning what to do with the victims' money [usually spent on poker machine gambling or alcohol]," Hagan said. "And after each of the murders, he took the hammer that he used as a weapon, took it home and washed it in acid. And so there was supreme evidence of intent with all the murders."

So the question remained: why? Why kill these women?

It wasn't the money. The amounts he stole from the women were small — "we're talking about tens of dollars," said Hagan.

Given the removal of the women's pantyhose, there was speculation his motivation was sexual. It also later emerged that between the second and third killing, Glover had indecently assaulted several women at retirement homes across Sydney. In some instances, he'd used his business as a salesman to gain access, while others occurred at the facility at which his mother-in-law lived — he'd wander off during visits and prey on other residents.

Yet despite this perversion, there was no evidence that he sexually assaulted any of the women he killed.

According to Hagan, Glover's motivation lies with his fractured relationship with his mother. As a psychologist testified during the trial, Glover — who loved his father deeply — resented his parents' separation and the fact that his mother had "several husbands and boyfriends" throughout his childhood.

When she died in early 1989, Hagan argued, Glover felt robbed of the opportunity to take her life.

"I think [his relationship with his mother] was everything to do with the motivation," he said.

"Glover did not know any of his victims at all. But why did he kill them? Well, the answer to that is simply that when he was killing them, he was actually killing his own mother, who was already dead."

Glover was convicted and sentenced to life in prison. In delivering the sentence, the judge gave the rare order that the killer was "never to be released".

"He is able to choose when to attack and when to stay his hand," the Justice said. "He is cunning and able to cover his tracks. It is plain that he has chosen his moments carefully."

Why he chose to spare Dorothy Beencke back on that November afternoon in 1989, for example, was unclear. And will remain so.

Reply
Upvote
I had the very great pleasure of knowing Lady Ashton. In 1988, I shared a hospital room with her at Sydney’s Royal North Shore Hospital. We became close over the two weeks we were together.
She was one of the most delightful people I’ve ever met. Despite her diagnosis, she was always happy. She loved to tell stories of her life, which I loved to listen to. My favourite, was the one about how she got her name. She was born in South Australia she said, and was the only girl after several boys. The way she told it, after her birth, both she and her mother were close to death. In order for her to be baptised before she died, which was expected, the priest needed a name. As Lady Ashton’s parents had assumed this baby would be another boy, they’d never discussed girls’ names. Under pressure from the priest to hurry up, her father came up with the first female name he thought of, which was Winfreda. It was the name of his yacht!
When I heard the news of her death, I was so sad. She was the gentlest person ever. Had Glover asked for her money, she would willingly have given it to him. She called everyone ‘darling’ and seemed to genuinely love everyone she met. She was ill anyway, and a beautiful soul like her deserved to die with dignity surrounded by her family, not in a squalid garbage area.
News
General
Opinion
True Crime
Politics
Sport
Explainer
Entertainment
Celebrity
Reality TV
Movies
TV
Books
Rogue
Royal
Lifestyle
Beauty
Fashion
Weddings
Home
Wellness
Health
Fitness
Travel
Food
Parents
Before The Bump
Pregnancy
Baby
Kids
Teens
School
Parent Opinion
Work & Money
Money
Finance
Career
Lady Startup
Relationships
Sex
Dating
Separation
Friendship
Family
Real Life
Couples