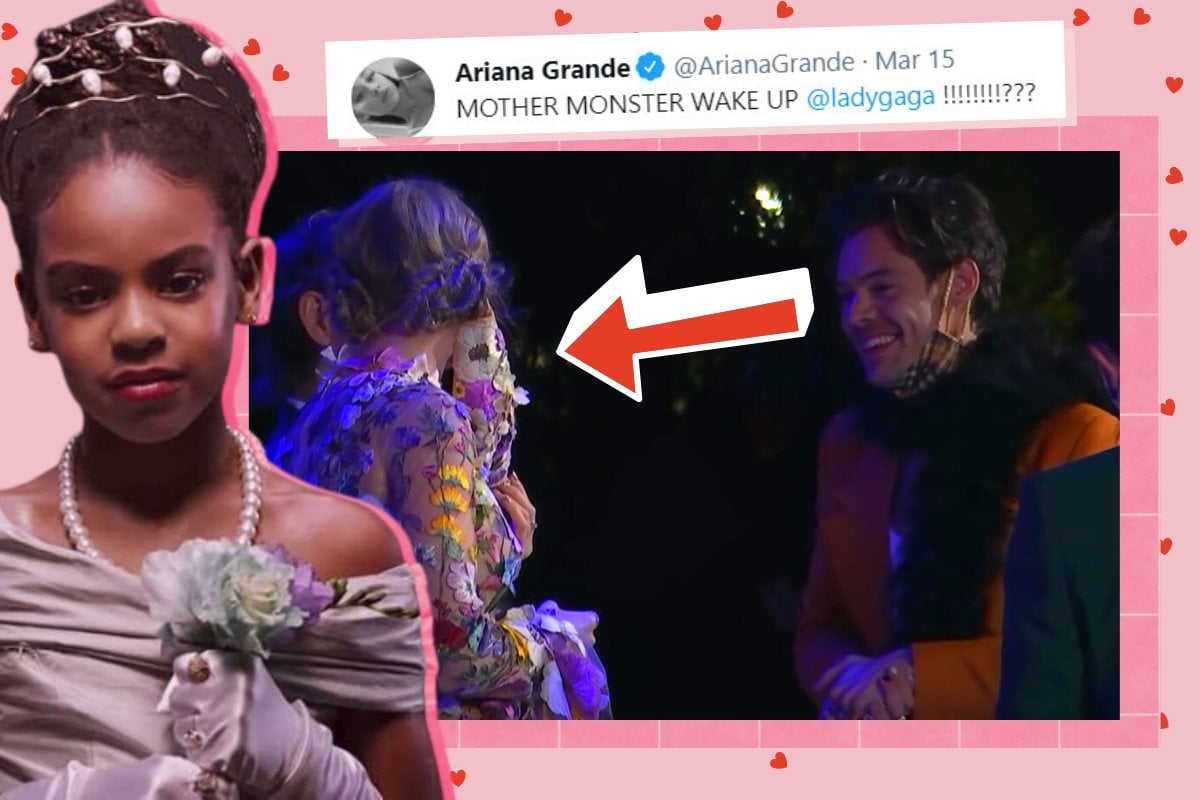 The 2021 Grammys saw the return of IRL awards shows and for the most part, the show was a bloody treat.

It was still a COVID-safe affair, taking place outside and with a majorly stripped down show, but after a year of Zoom-based awards shows and no red carpets, it was good to see celebrities wear weird outfits and provide us with interactions to gossip about.

There are heaps of moments from the show you've probably heard all about by now: Like Beyonce and Taylor Swift smashing records, Harry Styles' feather boa and Cardi B and Megan Thee Stallion's incredibly self-censored version of 'WAP'.

Watch: Megan Thee Stallion on how Beyonce inspired her. Post continues below video.

(Seriously, imagine how much they would have needed to rehearse to make sure they don't accidentally sing... nearly any of the words to the song.)

Everyone wanted this, and the Grammys knew that... so they uploaded a minute-long video of Harry Styles and Taylor Swift literally just... talking.

HARRY TAYLOR INTERACTION IN 4K 😭😭😭😭 i can't believe this is real pic.twitter.com/CCuHRXv3yc

There's no sound to the vid, besides what sounds like Doja Cat's performance in the background, so we have no idea what was said but if it isn't about a collab or Harry telling Taylor how he'd improved his driving skills, we don't wanna hear it.

(It does look like Harry said 'it was nice to see you' at one point though, so, swoon).

As the internet says, we love our divorced parents.

Gaga slept through her award.

In the pre-show, Lady Gaga and Ariana Grande took out the award for Best Pop Duo/Group Performance for 'Rain On Me'.

Gaga's currently in Italy filming a movie though, so the ceremony took place overnight... meaning she uh, fell asleep before their win was announced and Ariana tweeted at her to wake up.

Biebs is now a country star.

When the nominations were announced in November, Justin Bieber said he was disappointed to be nominated in pop categories, because he considered his latest album R&B instead.

Anyyyway, he didn't win any pop (or R&B) awards, instead taking out a Grammy for... a country song.

Beyonce and Jay-Z's nine-year-old daughter Blue Ivy has won her first Grammy, and sigh, that makes me and my 28 years of achievements look... very sad.

Blue Ivy is credited as a featured artist and songwriter on the track, and she performs a few lines on the outro, so... she's now the second-youngest person to ever win a Grammy.

"Congratulations Blue. She won a Grammy tonight. I'm so proud of you, and I'm so honoured to be your mummy," she said.

Taylor used her record-breaking third Album of the Year win to thank "James, Inez and Betty", which are the names of characters featured in her folklore teenage trilogy songs, 'august', 'betty' and 'cardigan'.

They also happen to be the name of her mates Blake Lively and Ryan Reynolds' children.

She first thanked boyfriend Joe Alwyn by saying he "is the first person that I play every single song that I write and I had the best time writing songs with you in quarantine."

Then she continued: "I want to thank James, Inez and Betty and their parents, who are the second and third people that I play every new song that I write."

This Lizzo and Harry selfie.

Everyone must see these photos:

The Strokes gave the most awkward acceptance speech of the virtual awards era.

The Strokes won their first Grammy for Best Rock Album for 'The New Abnormal' and their acceptance speech is... so awkward. So, so awkward.

They Zoomed in from New York, because COVID, so they accepted virtually... from a dingy lit basement with a pool table and a jukebox.

When they were announced winners, the livestream cut to the band who had no idea they'd won. For 20 seconds they stood in silent anticipation.

"It's cutting out, who won?" bassist Nikolai Fraiture eventually said. When they were once again told they'd won, they cheered and began a thank you speech and spraying beer.

Rapper DaBaby gave his hit 'Rockstar' a very dramatic glow-up during his performance, complete with a violin and gospel choir vibes.

Aaaand if you looked closely at the background during the song, the women singing behind him - dubbed by host Trevor Noah as DaBaby Boomers - were doing the absolute most.

DaBaby’s choir was getting into it 😂 #GRAMMYs

da baby got judge judy wildin in the background

The dramatic grandma choir behind dababy I- #GRAMMYs pic.twitter.com/3icRNWbkLz

“Sorry honey you guys can’t come over tonight, I have to go dance as a nun for DaBaby at the Grammy’s tonight.” -someone in LA’s grandma

The greatest part of this is one of the dancers, Beth Bowles, has spent the past 24 hours thanking people on Twitter for their support. It's the most wholesome thing ever.

We were livin for DaBaby! #dababyboomers

Elton John may now need to punch someone.

Okay, that's a tad inflammatory. But he did say so himself!

In a podcast discussion with Phoebe Bridgers, Elton John said her Grammy-nominated album Punisher felt like an 'old friend', and if she didn't win a Grammy he'd resort to violence.

"Good luck with the Grammys. If you don't win at least one, I'm going to hit someone, OK?"

So when Phoebe walked away empty-handed, she posted a photo of herself pretending to hold awards to Instagram.

No word on how Elton's responded but uh, we'd keep our distance for a while.