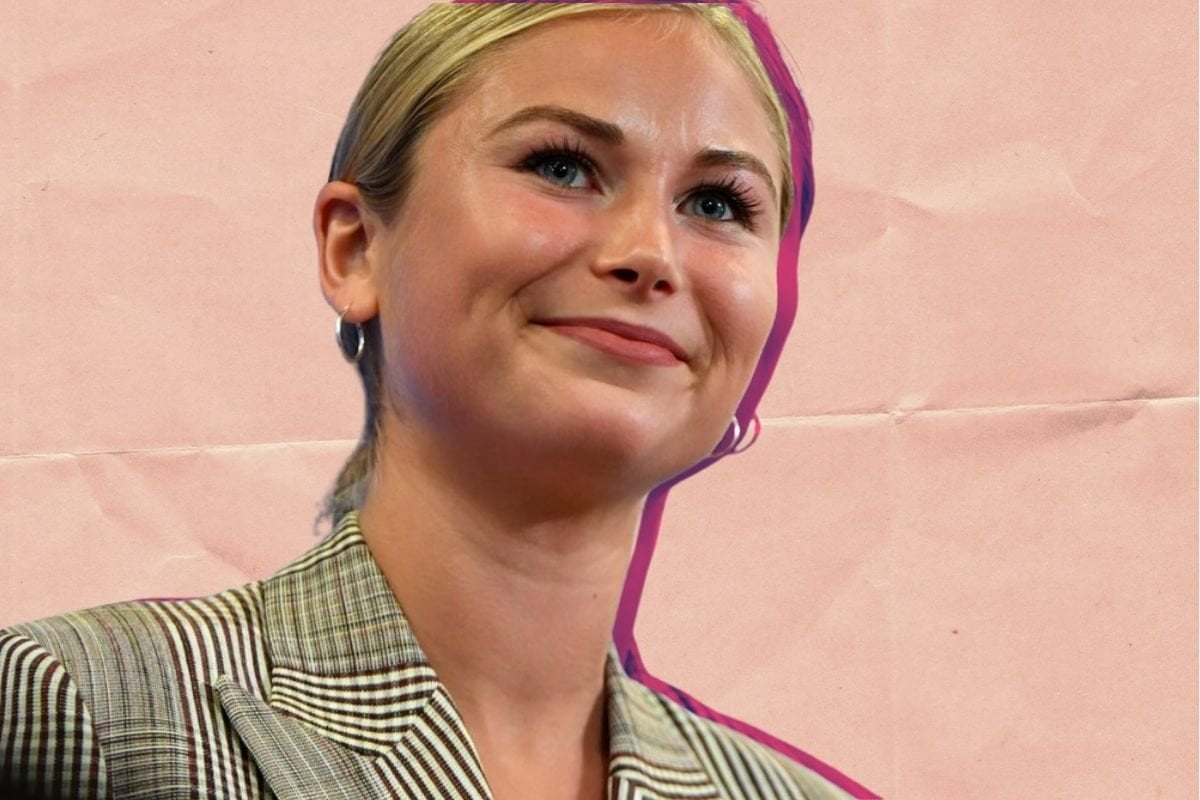 In an impassioned speech one night in January, Grace Tame was ready for the nation to hear her, as she accepted her monumental ‘Australian of the Year’ award.

As she said in that speech, she had been silenced for too long - as a victim-survivor of child sex abuse - by a legal system that allowed a paedophile to publicly speak while insisting that she privately suffer.

Six months after receiving that award, Grace Tame herself has certainly made some noise. In fact, she - along with women like Brittany Higgins and Chanel Contos - have triggered an Australian reckoning. I don’t need to remind you how...

But despite the meaningful noise she has generated in this country, Grace Tame wants you to know that she is not a ‘loud’ woman. It's a term the 26-year-old says parts of the media have labelled her. It's patronising, she says.

“Just because a woman is granted her basic human right to use her voice - and uses it to call out injustice - it doesn't mean that she's being 'loud' by doing so," she tells me over FaceTime, after speaking at Bumble’s Modern Womanhood event.

You don’t often hear about ‘loud’ men in the same context - if ever - she points out. 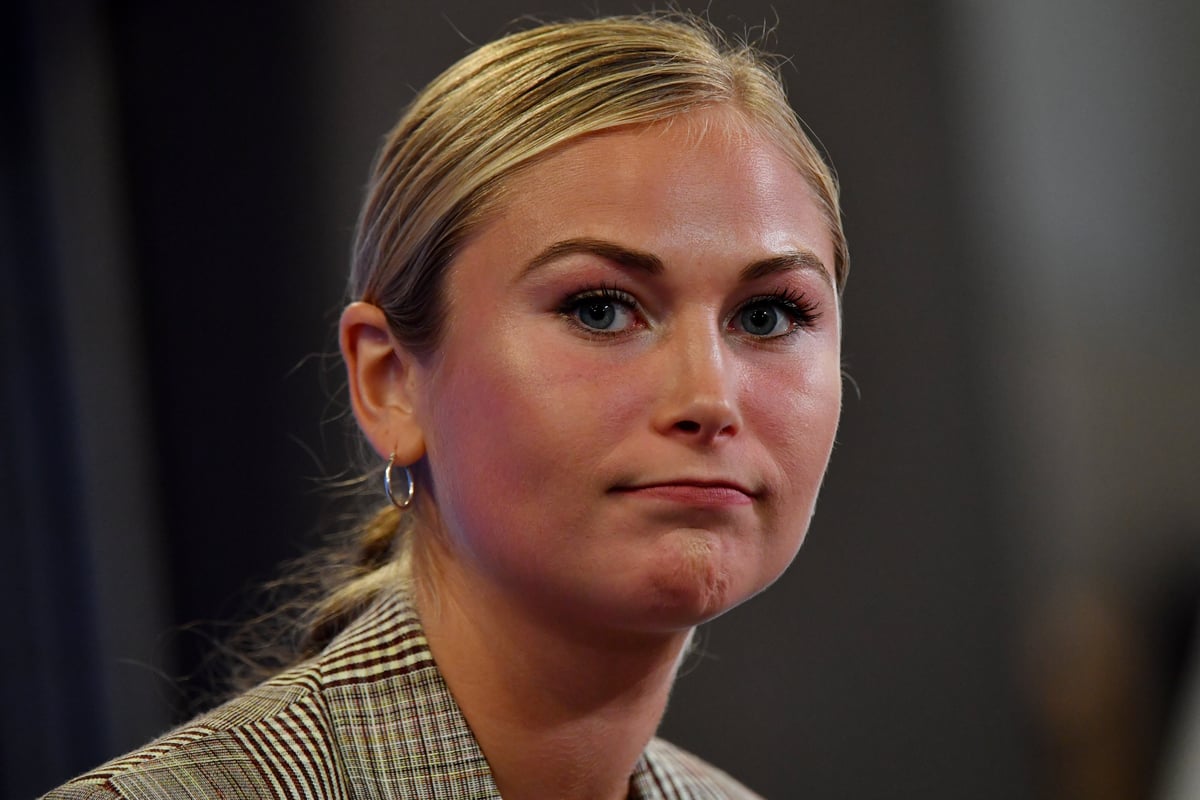 Grace Tame is the 2021 Australian of the Year for her sexual assault advocacy work. Image: Getty.

“It's like when I pointed out [Assistant Minister for Women] Amanda Stoker has a pretty corrupt history of aligning with a woman who gave a platform to the paedophile that abused me,” the 26-year-old reflects. “She came out and said that I was impassioned and ill-informed of her supposed moral credentials... I found that patronising. It's like, 'That's all good. Go back in your box now’.”

She sees these descriptions of her as an example of internalised misogyny - when people subconsciously project sexist ideas onto women. In the last year, nearly three in four Australians under 50 have witnessed misogyny in some form, with media and politics the most common channel to have seen this, according to a recent finding by Bumble.

"Calling me 'loud' is the same as calling a woman 'bossy', when you would call a man 'assertive' for the exact same behaviour," Tame points out. “The 'loud' language goes for me in the same basket as 'rage'.”

Rage is something Tame tries to steer clear of in her messaging. Instead, she focuses on reason and rationality, believing that whilst anger is completely justifiable, it is not always constructive.

Tame adds she doesn't want to be someone who is "really hypersensitive and is easily offended by that terminology," but that critically analysing how structural misogyny influences and impedes the national conversation is paramount to pursuing change.

And her rational approach is, clearly, working.

That includes collaborating on important structural reform with the Assistant Minister to the Prime Minister, Ben Morton, who also heads the National Office for Child Safety.

Whilst in the media Tame has been in the middle of "slanging matches" with Prime Minister Scott Morrison, she says her comments have been heightened and hyperbolised.

"I've got my opinions about how the government operates, but those are my opinions. It's the media who want to throw me in a boxing ring with him and I have no interest," Tame explains.

"I'm happy to put my differences aside and work with anyone if it means the result is something that benefits the greater good."

Watch: Grace Tame on the power of abuse survivors' stories. Post continues below.

Beyond the politically powerful, Tame's words are having a meaningful impact on the average Australian too.

Every day strangers share with her their own lived experiences. One story, from just a couple weeks ago, she knows will stay with her for a long time.

After delivering a speech for Business Chicks, guests were lining up to speak to her. As she looked out to the line of 60 people, she could see it was predominantly women. But there was one middle-aged man, waiting and shaking.

“My instinct and my nature is to put people at ease and ask them if they're OK. He was on the verge of tears. I just gave him a hug. And I could feel when I hugged him that all this tension just dissipated in that moment.

“He opened up about his experience of being sexually abused as a four-year-old child. Then he went down and started speaking to my father, who was just at the front of the stage. My father later told me that this man hadn't shook anyone's hand for ten years.”

It was another day in the life of Grace Tame, and every day she is making a difference. Not as a loud woman, but as a woman of influence demanding change that can no longer be denied.

Reply
Upvote
1 upvotes
Thanks for your story about an inspiring person who is a good role model for Australians in terms of dignity, activism, intelligence, and selfless service to a cause that helps others despite her own adversity. I am so thankful that in the Australia of 2021 we have (mostly) grown up enough to recognise it.
News
General
Opinion
True Crime
Politics
Sport
Explainer
Entertainment
Celebrity
Reality TV
Movies
TV
Books
Rogue
Royal
Lifestyle
Beauty
Fashion
Weddings
Home
Wellness
Health
Fitness
Travel
Food
Parents
Before The Bump
Pregnancy
Baby
Kids
Teens
School
Parent Opinion
Work & Money
Money
Finance
Career
Lady Startup
Relationships
Sex
Dating
Separation
Friendship
Family
Real Life
Couples