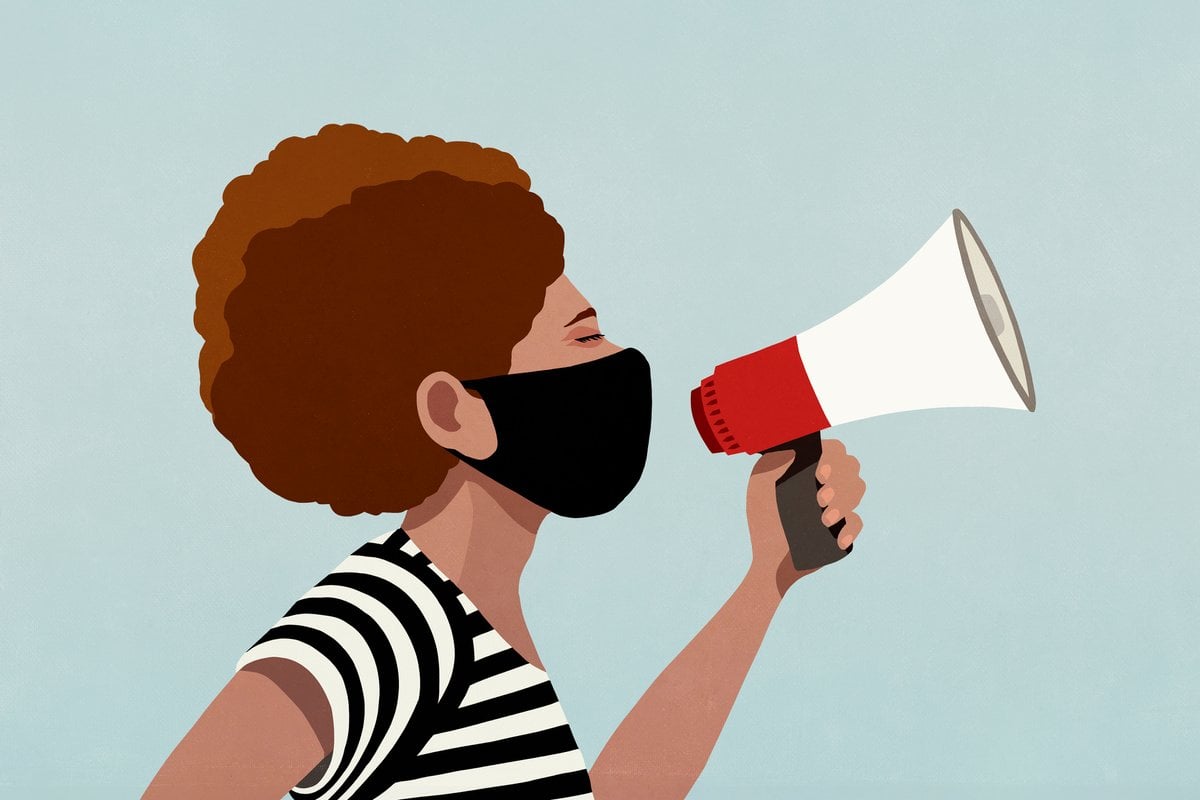 Australian women have been most effective, politically, when they have harnessed their collective rage and turned it into action. They need to do it again now.

Like many Australians, I was delighted when activist Grace Tame was named the 2021 Australian of the Year. Tame is a powerful advocate for survivors of child sexual abuse, drawing on her own experience of being groomed and abused by a paedophile when she was just 15.

Tame’s case was the catalyst for the creation of the #LetHerSpeak Tasmania campaign, which was created by journalist Nina Funnell in partnership with Marque Lawyers and End Rape On Campus Australia to overhaul gag laws that silenced victims of sexual abuse.

Watch: Grace Tame on the power of abuse survivors' stories. Post continues below.

Accepting her award, Tame declared she was:

"...using my voice, amongst a growing chorus of voices that will not be silenced. Let’s make some noise, Australia."

Tame’s bravery inspired former political staffer Brittany Higgins to make some noise of her own. The revelation of her alleged sexual assault in a ministerial office and subsequent treatment by her employers has appalled observers.

Most recently, it has been alleged a man who is now a federal cabinet minister (revealed on Wednesday to be Attorney-General Christian Porter) raped a 16-year-old girl in 1988. The response that best reveals the prevailing political culture was when Prime Minister Scott Morrison, who was sent a letter outlining the allegation, airily admitted he hadn’t read it. He added that because the minister has "vigorously denied" the allegation, there were "no matters" that required his attention.

In a defiant press conference on Wednesday, Porter denied the allegations. He refused to call for an inquiry or stand aside from his role, saying:

"If I stand down from my position as Attorney-General because of an allegation about something that simply did not happen, then any person in Australia can lose their career, their job, their life’s work based on nothing more than an accusation that appears in print."

To say Australian women are angry about the events of the past few weeks is an understatement. In a powerhouse address to the National Press Club on Wednesday, Tame stressed the importance of turning that rage into action:

"One voice, your voice, and our collective voices can make a difference. We are on the precipice of a revolution whose call to action needs to be heard loud and clear."

Australian women’s collective rage is not without precedent.

Activist Kate Jennings articulated this rage in a speech at an anti-war rally in 1970:

"There are a lot of people who feel strongly about the Vietnam war. But how many of you, who can see so clearly the suffering and misery in Vietnam [...] how many of you would get off your fat piggy asses and protest against the killing and victimisation of women in your own country."

The women’s movement drew strength from talking. Sharing their experiences in consciousness-raising groups, they realised their problems were not personal but structural, demanding structural solutions.

It didn’t take long for the movement to articulate its core demands: free abortion and childcare, equal pay, equal job opportunities, and an end to media sexism. While they did not limit themselves to activism on these issues, they focused and shaped their work.

By early 1972, the Women’s Electoral Lobby, the movement’s moderate wing, ingeniously placed women’s issues on the political agenda by inaugurating their candidate survey.

WEL members in every Australian electorate interviewed all political candidates. Not only did the survey train women in political lobbying, it laid bare the views of the (mostly) male candidates on women’s issues. It also gave women a political voice.

When the Whitlam government was elected, in part because of WEL’s advocacy, the women’s movement used their new leverage to achieve reforms on equal pay and contraception, and later made important gains in childcare, the funding of women’s refuges, and family law.

Whitlam appointed to his staff a women’s affairs adviser, Elizabeth Reid, who worked to make government more responsive to women’s needs. She, and subsequent feminists working inside the state, could not have exerted the influence they did without an active women’s movement agitating for change.

Surprisingly, violence against women was not initially a primary focus of the women’s movement. It emerged through consciousness-raising and so too did feminist methods of addressing it: rape crisis centres and women’s refuges.

Activism around sexual violence moved to centre stage: women marched against male sexual violence in Reclaim the Night Marches from 1978, and in the early 1980s feminists marched on Anzac Day "in memory of all women raped in all wars".

Today, feminists are still campaigning against male violence against women.

Over the past few years, we have mourned hundreds of women who have died due to family violence. We have witnessed royal commissions into family violence and into institutional responses to child sexual abuse. We have admired the courage of survivors like Rosie Batty. We gasped as serial sexual predators were exposed under the banner of #MeToo.

But too little has actually changed.

Women are angry and they are tired.

Tired of mansplainers and misogynists, and those who bleat #NotAllMen instead of asking #WhySoManyMen? Tired of women who have benefited from feminism yet refuse the label of "feminist". And tired of having to once again fight the battles that women in the 1970s and 1980s thought they had won.

Rage is politically potent, and useful.

You only need to look at the ways Donald Trump fuelled his army of supporters to understand that. But if the lessons of second wave feminism are any guide, women not only need to get angry, they need to get organised.

The women’s movement was energised by its collective nature and common goals.

Today’s female rage is fierce, but it is not yet harnessed to a clear agenda for action. Women need to create this agenda together, and then work out how best to achieve it.

We know so much more about women’s oppression today than women did in the 1970s, especially the ways in which different types of discrimination overlap and combine.

We are perhaps more sceptical of the ability of institutions to effect change. And we are painfully aware that neo-liberalism has shrunk the state and limited the possibilities for activism.

But our scepticism, and our lack of attention, has extracted a cost. In the 1980s, government policy was routinely audited for its impact on women. But in the 1990s, feminist policy "machinery" was steadily dismantled.

Today’s Office for Women has a tiny staff and a low profile. It was not consulted on any of the major COVID-related policy shifts, like JobKeeper or changes to superannuation.

If our parliament is full of men who ignore, belittle and disrespect women, and women who enable these men, it is because we, the voters, have put them there. But we can also vote them out.

A women’s candidate survey, ready to roll out at the next federal election, is just one strategy from the women’s movement of the 1970s that might be worth reviving today.

Women need to maintain their rage, but they need to turn it into political action, too.

This article has been corrected. It orignally read: Tame’s [#LetHerSpeak] campaign, which she created with journalist Nina Funnell and Marque lawyers, has overhauled gag laws that silenced victims of sexual abuse. Tame turned her anger into action and made change. It has been changed to: Tame’s case was the catalyst for the creation of the #LetHerSpeak Tasmania campaign, which was created by journalist Nina Funnell in partnership with Marque Lawyers and End Rape On Campus Australia to overhaul gag laws that silenced victims of sexual abuse.

Reply
Upvote
Women who are politically engaged need to encourage the women in their lives who aren't, to get engaged. So many women still find politics 'boring' or vote the way their male partners tell them to, as if it doesn't have anything to do with them. We must shame women who feel it is acceptable to be ignorant of politics, especially if they are the mothers of daughters. The Women's Electoral Lobby should be all over this. We need a media campaign to reach as many women as possible.
News
General
Opinion
True Crime
Politics
Sport
Explainer
Entertainment
Celebrity
Reality TV
Movies
TV
Books
Rogue
Royal
Lifestyle
Beauty
Fashion
Weddings
Home
Wellness
Health
Fitness
Travel
Food
Parents
Before The Bump
Pregnancy
Baby
Kids
Teens
School
Parent Opinion
Work & Money
Money
Finance
Career
Lady Startup
Relationships
Sex
Dating
Separation
Friendship
Family
Real Life
Couples