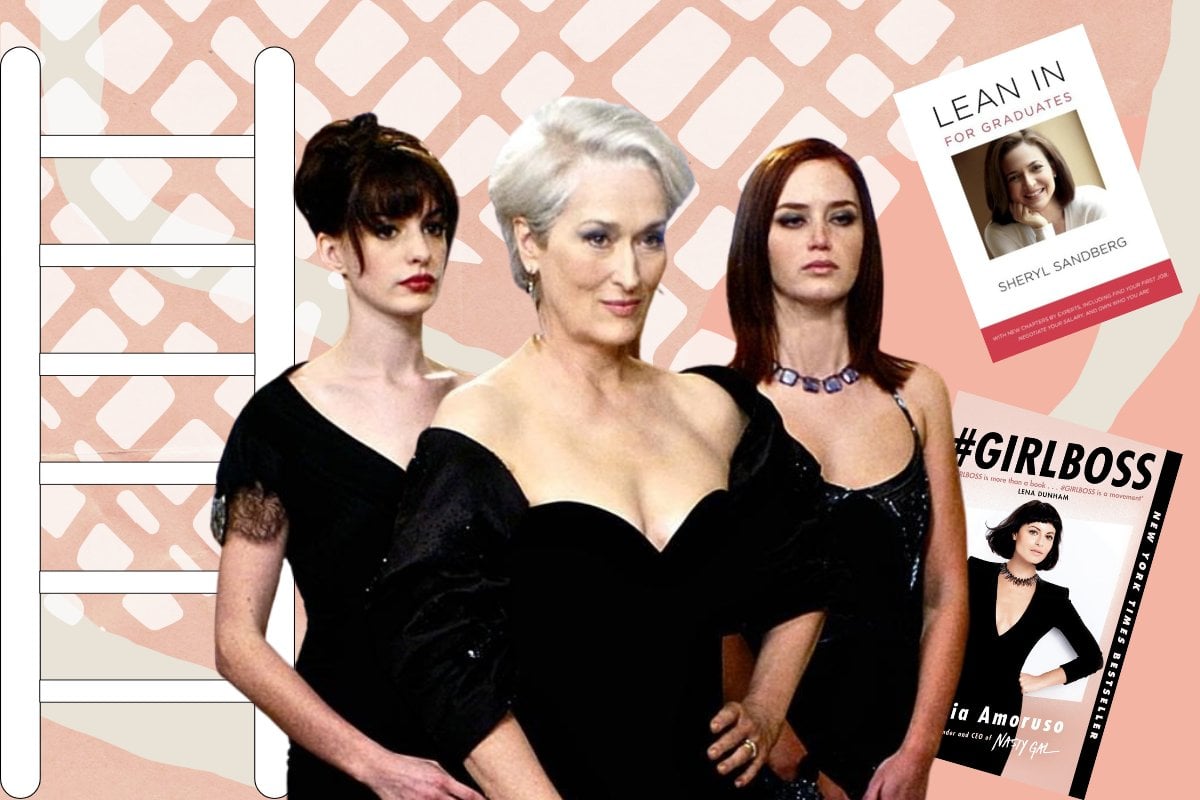 There's a scene in The Devil Wears Prada that perfectly sums up the lie millennials were sold about work.

It's right at the start of the cult movie, where a fresh-faced Andy arrives at the offices of Runway magazine for her first day of work as Miranda Priestly's second assistant.

Miranda Priestly's first assistant, Emily, a woman who has been fetching her coffees and girding her loins against the brunt of Miranda's wrath for several years, is showing Andy around the office.

At one point, Emily, walking briskly through the office, dressed head-to-toe in black designer clothes, reminds Andy that "A million girls would kill for this job."

The Devil Wears Prada was released in 2006, just as the 'elder millennials' (or God help us... the 'geriatric millennials') were entering the workforce. There was an oversupply of overqualified new graduates and not enough shiny new jobs to go around. By 2008, when the financial crisis hit, those entry-level jobs were as rare as Miranda Priestly's curt nod of approval.

Watch: The star signs when there's a problem at work. Post continues below.

A million millennial women would have 'killed' for a low-paying, entry-level job with outrageous hours and a demanding, unpredictable boss.

After all, it was a foot in the door. The first rung on the ladder towards the dream of being a "girl boss" and "having it all".

This was a dream that seemed so unattainable to new graduates who were applying for hundreds of roles and maybe getting a handful of interviews. Then refreshing their email every five minutes to only occasionally receive a short, general rejection letter explaining they didn't have enough experience for the role, a role that would give them exactly the kind of experience they needed.

It was also a dream that seemed completely out of reach to those who had been out of school or university for a few years at this point and hadn't been able to land a permanent role. Or maybe they had a role for a brief moment, but a restructure or the end of contract meant they needed to start from scratch again. They spent their days working in casual jobs in retail or hospitality and spent their nights applying for hundreds of more entry-level roles.

But they never let go of that lie they had been sold. The dream job. The hustle. The first rung on the ladder that would, after many years and a lot of hard work, lead them to 'having it all'.

Those millennials would (hopefully) eventually land that dream job and begin to make their way up the ladder.

From the start of our careers there was a sense that we were "lucky to be here". It was ingrained in the culture of work. It was implied. Sometimes it was said out loud. And we believed it. After all, we had the rejection letters and the hundreds of unread job applications as proof.

We internalised that message and used it to motivate us to turn up to work and try a little harder each day. To clock on/clock off and to always be working towards the next opportunity.

Building a 'personal brand' off your job, working ridiculous hours, and undervaluing your worth were the norm.

Soon came the era of the #GirlBoss and a woman named Sheryl Sandberg taught us how to lean in.

Lean in, step up, start up, don't stop. Be grateful. Don't rock the boat. Don't burn your bridges. After all, you're lucky to be here.

At the beginning of the pandemic, many of those same millennials had now reached the top of their ladder. They had followed the rules. Put their heads down. Worked hard. They had received promotion after promotion, and with each promotion, more work, more responsibility.

They were lucky to be here.

Some of them had gone out on their own and created start-ups. Some of them were managing large teams.

It was around this time that Gen Z began to enter the workforce. And millennials noticed there was something different about them.

While millennials were still feeling 'lucky to be here', Gen Z wholeheartedly believed companies were lucky to have them.

They came in confident. They knew their worth. They set boundaries around work and communication and actually created a work/life balance from the start. They didn't punch the clock. They didn't even really believe in 9 to 5.

They spoke up and spoke out and they were unapologetically themselves.

They weren't afraid to ask for what they wanted, which left many millennial and Gen X people managers shaking in their boots.

The boomers had absolutely no idea what to make of them.

In October 2021, The New York Times published an article titled: "The 37-Year-Olds Are Afraid of the 23-Year-Olds Who Work for Them."

It was quietly and quickly shared in group chats and in private Slack channels.

It put into words what many millennials have been feeling for the last couple of years. We're terrified of this new, confident breed of juniors and we feel completely out of our depth managing them.

But what the article, which has now been shared millions of times around the world and has spurned many think pieces and podcast segments, didn't say is that many of us are also in awe of Gen Z and their approach to work.

By watching them come into workplaces, and quickly and confidently dismantle a system that has been working against us all this time, we have begun to reassess our own approach to work.

We've witnessed a radical shift in self worth, and we're beginning to think that maybe we got it all wrong.

Maybe we're not just lucky to be here? Maybe they're lucky to have us?

LISTEN: Are you afraid of your Gen Z colleagues? Post continues below.

It's probably not a coincidence that Gen Z entering the workforce, combined with the pandemic, has led to what economists are calling 'The Great Resignation' or 'The Big Quit'.

Millennials have spent the last decade or two truly believing they were 'lucky to be here'. Working from home during the pandemic has given them the first opportunity to put some distance between themselves and the office. To take stock.

Combine that with the influx of Gen Zs to the workforce, and it's no surprise that millennials are looking for a change.

The Devil Wears Prada is probably not a movie that would be made in 2021. But if it was, I imagine it would look a little different.

Emily would likely welcome Andy with open arms, keen to handover to her before leaving to pursue "other opportunities".

Reply
Upvote
I'm a generation that depends on what year you select as the "end of boomer" or "beginning of Gen X".  I've been on the Internet since it was built (I helped build it).  I've made it to CFO of some startups and really would like to downshift, but still work.  I would LOVE to have some of those entry-level positions and let you all have the leadership.  No one will interview me since I have these skills and years on my resume.  Look, there aren't enough positions at the top and I don't want to be there anyhow!  And frankly, I live in the US and healthcare is outrageously expensive.  I need to have a job so that I can afford to live.  So, what to do?  I don't want to be your mother, just your colleague.  I've got skills and I'm not climbing the ladder to take your job - it's yours if you want it.
M
mamamia-user-405278599 8 months ago

Reply
Upvote
1 upvotes
I don't think we're afraid of them. 'Geriatric millennials' started working with Baby Boomers as their bosses (also the generation of our parents which always makes me laugh when they point out the flaws in the ways our generation behave because they literally made us). We have BB who refuse to retire until their late 60s-70s, whether due to personal choice or a lack in superannuation. So we have had to work in entry level jobs for years, despite it being banged into us in school that we needed a degree at least. Everyone has to start somewhere, but I don't think it's been acknowledged enough that it's hard to work in a role where your full scope of practice isn't allowed, your pay hardly covers living expenses (rent and utilities- not avocado) and you're constantly told your generation are just a big pack of whingers. I have a degree and post-grad qualification, I'm very experienced in my career of choice, and I;m happy enough. I don't adore my job, but it's a job, not a hobby. I do manage a whole lot of Gen Z, fresh out of school and in their first years of uni. And I love them. They're open, friendly, hardworking and professional. They work well as a team and take personal responsibility. i don't see the need for rivalry, it's so superficial. Get to know them and you'll find out their great.
News
General
Opinion
True Crime
Politics
Sport
Explainer
Entertainment
Celebrity
Reality TV
Movies
TV
Books
Rogue
Royal
Lifestyle
Beauty
Fashion
Weddings
Home
Wellness
Health
Fitness
Travel
Food
Family
Before The Bump
Pregnancy
Baby
Kids
Teens
School
Parent Opinion
Work & Money
Money
Finance
Career
Lady Startup
Relationships
Sex
Dating
Separation
Friendship
Family
Real Life
Couples