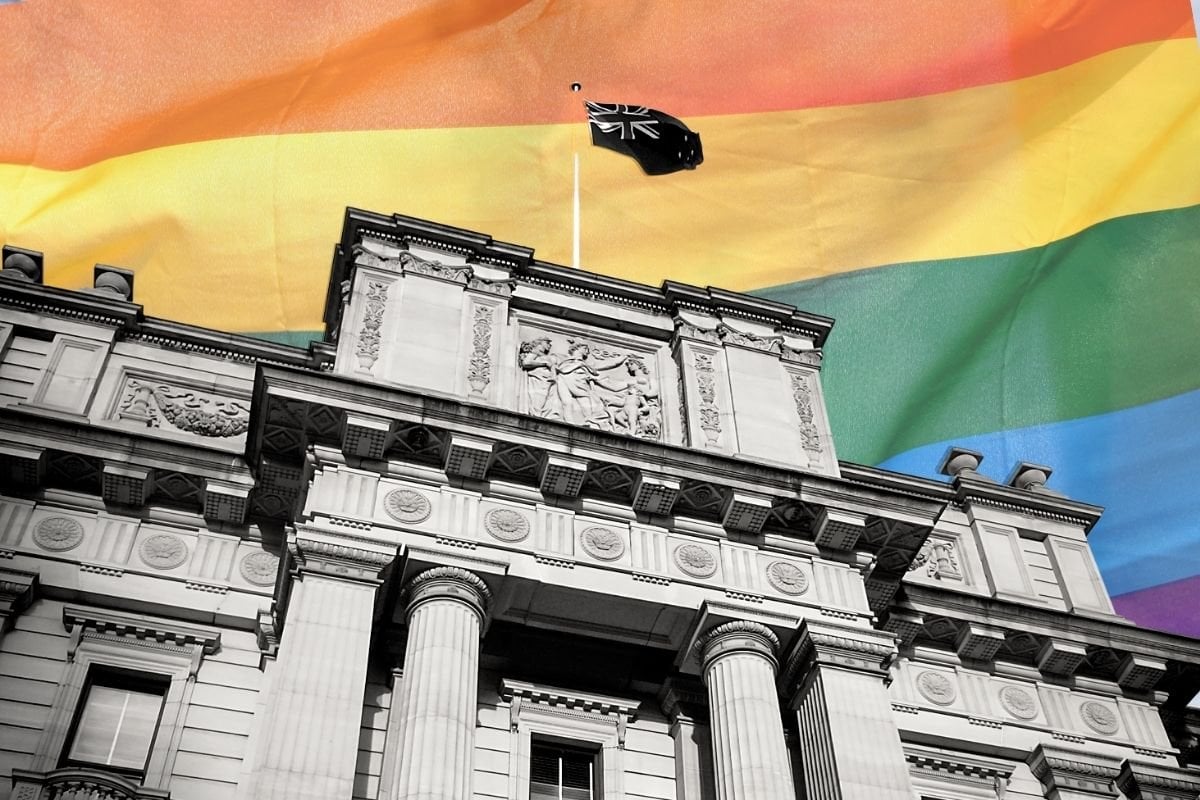 In August, Queensland paved the way by becoming the first Australian state to legislate against gay and gender conversion practices.

In September, the ACT followed.

Now, Victorian Parliament is set to usher in its own landmark Bill — and this one has the attention of advocates all over the world.

"My trans children aren't broken — they are perfect."

Victoria's Change or Suppression (Conversion) Practices Prohibition Bill 2020, which is expected to pass through the upper house on Thursday, outlaws practices that seek to change or suppress a person's sexual orientation or gender identity.

It also gives the Victorian Equal Opportunity and Human Rights Commission the power to investigate reports of such practices and refer them to police.

The penalty for those found to have engaged in illegal conversion practices that result in serious injury face up to 10 years behind bars.

Among the key supporters of the Bill is Victorian MP Andy Meddick of the Animal Justice Party. As a Legislative Council crossbencher, he will be crucial to the passage of the legislation, which for him is deeply personal.

"My two trans children aren't broken. They are perfect," he tweeted on Thursday morning. "Now Victoria’s laws will reflect that — and I’ll be so proud to play a part."

My two trans children aren’t broken. They are perfect.

Now Victoria’s laws will reflect that — and I’ll be so proud to play a part.

Let’s do this. #SpringSt pic.twitter.com/p2OKM6N0Ea

A 2018 report by the Human Rights Law Centre, Gay and Lesbian Health Victoria, and La Trobe University, found evidence that gay conversion therapy is being offered by religious groups in every state and territory in Australia, despite the overwhelming academic consensus that it is not only ineffective but damaging and unethical.

Chris Csabs is among those to have been subjected to the practice.

He’d realised he was same-sex attracted at the age of 13, but it was another three years before he opened up to his pastor. By then, the self-loathing was already deeply ingrained courtesy of his church and his desire to be ‘healed’ was overpowering.

When Chris finished high school, he signed up to the now-defunct Living Waters program in Canberra, willingly, desperately.

"That’s one of the misconceptions people have about this, that it’s people being forced into these ‘pray the gay away’ camps," he previously told Mamamia's daily news podcast The Quicky. "But particularly in Australia, it’s generally not like that. It’s people who have basically been taught—well brainwashed—into thinking that they are broken and need healing or fixing somehow."

The awful irony of that became clear when he finished the course six months later feeling even more broken than before.

"I became unable to function properly in society," he said, "because I was so frightened that anything could feed this demon of homosexuality that was inside me.

"I kind of shut myself off to a lot of people."

Victoria's Bill is the most robust response to the issue so far conceived by Australian lawmakers.

With those words soon to be enshrined in law, LGBTQA+ advocates are celebrating.

In a letter to Victorian premier Daniel Andrews ahead of Thursday's vote, organisations including Brave Network (for LGBTQA+ people of faith) and SOGICE Survivors (which Chris Csabs founded), described the legislation as "world-class", "tremendous, bold and brave".

"[The Bill] represents the world’s most significant achievement in legislation curtailing the diabolical influence of the conversion movement," the letter reads.

"Since its introduction to Parliament in late 2020, the Bill has been celebrated by LGBTQA+ advocacy organisations around the world, including Outright Action International, CT Survivors (US/Canada), No Conversion Canada and Ozanne Foundation (UK)."

Its expected passage through Parliament today comes despite a last-ditch attempt for an "urgent pause" by vocal religious groups.

Unlike Queensland's law, which only extended to healthcare settings, Victoria's also covers religious ones. It bans conversion by "carrying out a religious practice including but not limited to, a prayer based practice, a deliverance practice or an exorcism".

In an open letter to the premier, the Islamic Council of Victoria (ICV) and several Catholic leaders called for further consultation on the Bill, which they argue "appears to target people of faith in an unprecedented way, puts limits on ordinary conversations in families, and legislates for what prayer is legal and what prayer is not".

The Australian Christian Lobby also campaigned against the new legislation, which it described as "dangerous and Draconian". The conservative organisation also falsely claimed the changes "could land anyone in jail for failing to toe the line on LGBTQ issues."

"I think it's important that a few things are cleared up," she tweeted. "The Bill does not outlaw prayer, it does not prevent health professionals from doing their job, it does not stop parents talking to their kids about their views on sexuality or gender — but what is does do is clearly define what constitutes a change or suppression practice.

"We’ve spoken to survivors and consulted extensively to ensure we have the balance right and protect people from abhorrent change and suppression practices."

If you need to speak to someone about sexuality, identity, gender, feelings or relationships, QLife provides anonymous and free LGBTI peer support and referral for people in Australia. The service is available from 3pm to midnight every day. Call 1800 184 527 or visit the website to chat online.