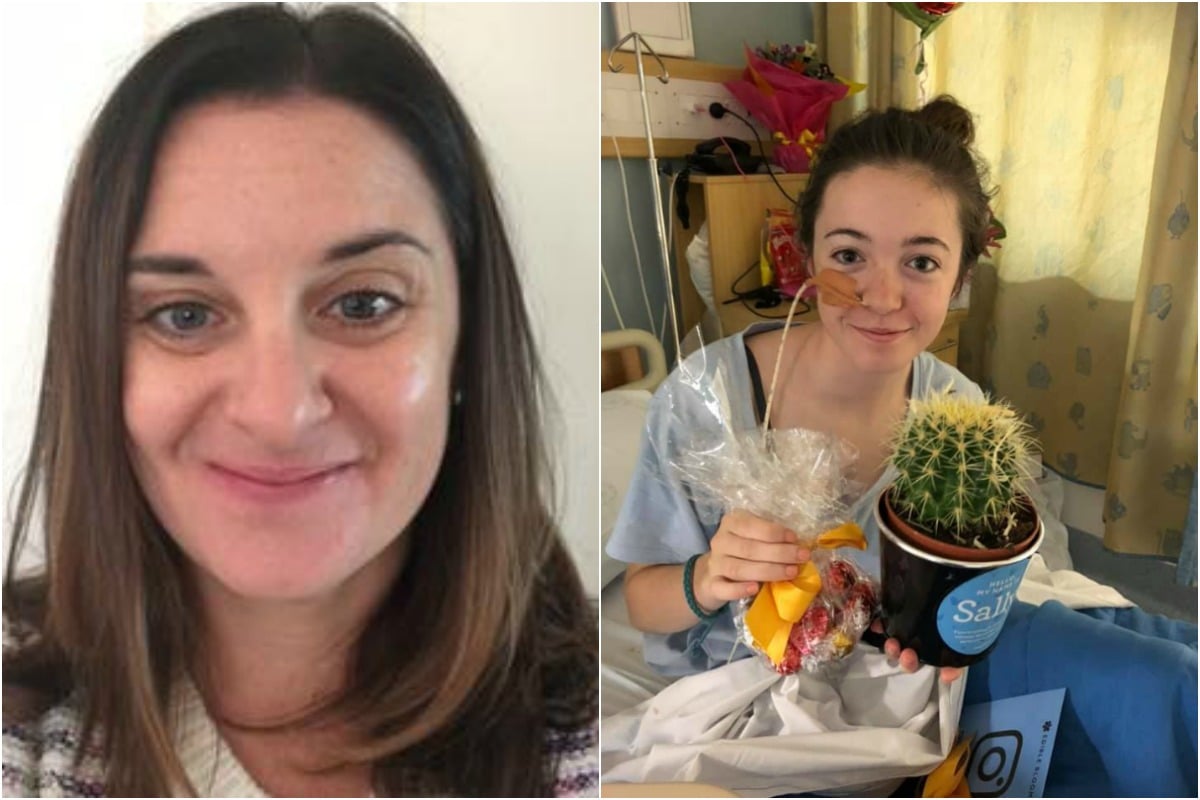 It started sporadically, but over the course of six weeks it grew in frequency until she was fainting every single day.

“It wasn’t from a hot day, she’s not running around playing sport. She’s literally sitting in the classroom doing work and would blackout,” Isabelle’s mother Kate Smith told Mamamia.

Learn more about FND below. Post continues after video.

A few weeks in at yet another hospital appointment, Kate and Isabelle went to leave after being told yet again “there’s nothing wrong” when Isabelle  exclaimed “I can’t feel my left foot,” as she hopped off the bed.

It was then discovered she couldn’t touch her nose with her left hand. Doctors immediately thought she had suffered a stroke and sent her via ambulance to the larger hospital of Orange NSW, an hours drive away from Parkes, which was home.

But test after test came back negative, and she was discharged with a set of crutches and the explanation; “it might just be a pinched nerve, it’ll come back…”

Kate wasn’t convinced, and after more fainting episodes she bundled her daughter onto a plane and presented her to Westmead Children’s Hospital in Sydney. It was here that she finally got some answers. Isabelle was diagnosed with Functional Neurological Disorder (FND), a very rare condition.

The exact prevalence of FND is unknown, however research suggests it could actually be as common as multiple sclerosis or Parkinson’s disease.

“We were relieved but scared. With things like epilepsy, or MS, people have heard of it – but because we have never heard of this, we don’t know what’s happening next. It was daunting… no one can give you a timeline,” Kate told Mamamia.

In November, Isabelle lost function in both legs, and was in a wheelchair. Three months later, she was walking again. But within weeks, Isabelle lost the function to speak.

“Once one symptom presents itself the others (like the fainting) disappear,” Kate explained.

"She was talking perfectly fine one minute, went to her room to do something, came back down and grabbed a piece of paper and wrote 'I can't talk!'"

That symptom, luckily, corrected itself in 24 hours.

But right now, Isabelle has another terrifying symptom. She's lost the ability to swallow and is currently feeding through a nasal gastric tube. They're not sure how long it will last, or even if she'll regain the ability to swallow. Kate is hoping it's no more than eight weeks...like her legs.

Will Isabelle have a good quality of life?

Will her symptoms get worse?


Why do symptoms manifest so quickly and then disappear?

Is this a lifelong condition?

Which body part will lose function next?

These are questions the Smiths don't know the answer too. There's too little research about FND. What they have been told is that stress and anxiety can bring it on.

"If she's had a really crappy day. which she had had before losing her leg function. Her body tends to bring it out in physical ways. Most people when they're stressed might feel sick in the tummy, or comfort eat. Isabelle's is really really physical.

"It's like walking on eggshells you don't know what's going to be the next thing."

In some people, it's caused by trauma like a car accident or PTSD, which is why a lot of the treatment revolves around psychology and psychiatry. For Isabelle, doctors found that her anxiety levels were through the roof - which could have helped it manifest.

Kate has managed to connect with some people in online forums; "a lot of people who are in their 40s, 50s can't hold down jobs, or who can't drive a car," she said. "There are people that have seizures 30 times a day. But we just don't know (what Isabelle's disorder will look like)."

Her family's life, at the moment, revolves around hospital visits and trying to work out what's next with Isabelle's disorder. Kate and her husband are also trying to run two businesses in the construction and accommodation industries. Which adds another dose of stress to the mix.

"You have your moments when you think 'this is just shit' what have I done wrong? Why didn't I see any warning signs that anything was wrong? (with Isabelle)," said Kate.

"You wake up everyday and think - is this going to be the day she can swallow again? It's a wait and see game."

Unfortunately, there's not much more the Smiths can do at this stage except play the waiting game, and raise awareness in the meantime.

Isabelle has been announced as the worldwide face of FND's awareness week which is from the 7th-13th April.

thank you for speaking up about FND. I've been disabled by it since 2010. I'm so happy to see fndhope.org being used as a resource here too. In my journey, that was the only place that had any info for me. <3