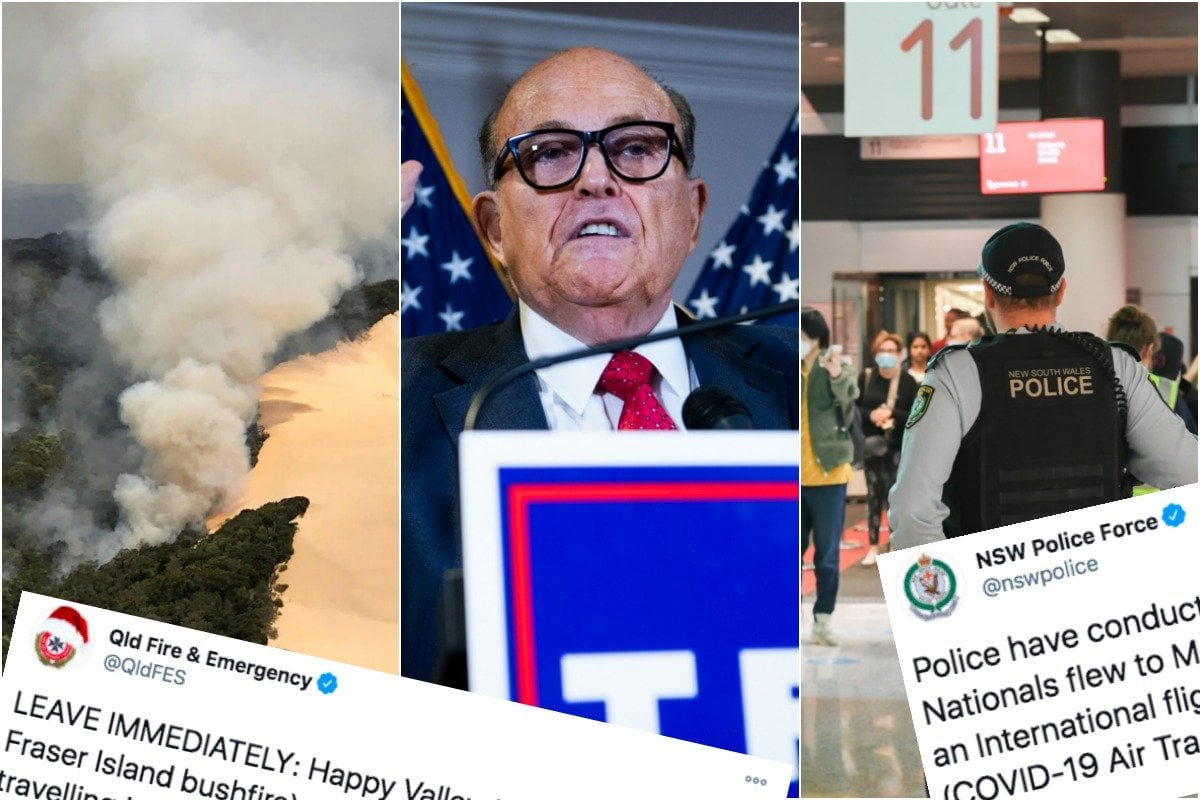 The news was reported by News Corp with the St George Illawarra forward awaiting a retrial in Sydney over an allegation of rape, after a jury in Wollongong was unable to reach a verdict in the initial proceedings.

De Belin has not played a game the past two seasons after he was stood down by the NRL over an allegation stemming from an incident in December 2018.

It's reported that the 29-year-old found a lump in his testicle earlier in 2020 and had keyhole surgery in September - two months before his trial began in November - which was deemed to be successful.

"He's a very strong-willed man and his focus remains on clearing his name before the courts."

Happy Valley residents have fled as a bushfire bears down on the township on the east coast of Queensland's Fraser Island, where the blaze has been burning for months.

Queensland Fire and Emergency Services issued a warning around 3.30am on Monday telling people to leave immediately as the fire approached.

"Conditions are now very dangerous and firefighters may soon be unable to prevent the fire advancing," it warned.

The large fire is travelling in a south easterly direction towards Happy Valley and is expected to hit the township around 7am.

"The fire is expected to have a significant impact on the community," the QFES said on Monday.

Residents were told to head to the Eastern Beach and head south to the Eurong Resort.

The change in the bushfire conditions was a disappointment for Happy Valley residents who on Sunday night thought they might be out of the woods as favourable weather conditions on the day slowed the fire's speed and intensity.

Water bombing aircraft were working on the fire until last light on Sunday evening and will resume this vital effort on Monday morning.

Dozens of residents have been forced to flee their homes, as a bushfire approaches a town on Queensland's Fraser Island. @anniepullar #9News pic.twitter.com/9XOx2C0CIb

Minister for Fire and Emergency Services Mark Ryan said more than 90 personnel in 38 vehicles and 17 aircraft were on Fraser Island, including a large air tanker.

The bushfire on the world heritage listed Fraser Island, off the Queensland coast near Hervey Bay, has been burning since mid-October.

Trump posted the news on Twitter writing: "by far the greatest mayor in the history of NYC, and who has been working tirelessly exposing the most corrupt election (by far!) in the history of the USA, has tested positive for the China Virus. Get better soon Rudy, we will carry on!!!"

.@RudyGiuliani, by far the greatest mayor in the history of NYC, and who has been working tirelessly exposing the most corrupt election (by far!) in the history of the USA, has tested positive for the China Virus. Get better soon Rudy, we will carry on!!!

Giuliani, 76, did not immediately respond to a request for comment.

The former New York mayor has been spearheading Trump's floundering effort to overturn his November 3 election loss to Democratic President-elect Joe Biden through a flurry of lawsuits.

NSW police own up to quarantine mistake.

NSW police have admitted it was their mistake that allowed two overseas travellers to board a domestic flight from Sydney to Melbourne and forced the entire plane into self-isolation.

The pair, German nationals travelling from Tokyo, managed to land in Sydney and fly straight to Melbourne on a Virgin flight on Saturday.

All 176 passengers and crew from Virgin flight VA838 which landed in Melbourne at 1.25pm, as well as five airport staff, have been told to quarantine at home.

NSW Police have admitted their mistake in letting two overseas travellers skip quarantine and fly from Sydney to Melbourne. pic.twitter.com/MGDgePzkNB

In a statement on Sunday afternoon, a NSW Police Force spokesperson said the pair  - a 53-year-old woman and 15-year-old boy - told officers they were booked on a flight to Melbourne, and were therefore deemed to be exempt from quarantining in Sydney.

"The NSW Police Force has since conducted a review into the circumstances of the incident and identified police had incorrectly allowed the two travellers to proceed to Melbourne," the spokesperson said.

"Police practices and systems at the airport have also been reviewed and strengthened as a result of this incident."

Police have conducted a review after two German Nationals flew to Melbourne after arriving in Sydney on an International flight in contravention of Public Health (COVID-19 Air Transportation Quarantine) Order 2020.https://t.co/b9q9crsnUT

Victorian Premier Daniel Andrews earlier revealed the pair - now in hotel quarantine in Melbourne - had tested negative to the virus.

He hopes those quarantining as a result of the incident will be released from their requirements on Monday, if the pair test negative to the virus for a second time.

Victorians are being encouraged to use their judgment about wearing masks despite it no longer being mandatory in some settings.

The easing of further COVID-19 restrictions means it is no longer compulsory to wear masks in offices or cafes.

Masks must still be carried at all times and worn on public transport, in ride-share vehicles, at indoor shopping centres and crowded places.

Statement from the Premier on Victoria's COVIDSafe Summer: pic.twitter.com/VDNN5AbzYf

Melbourne households are now able to receive 30 visitors a day - up from 15 - from an unlimited number of other homes, under changes that came into effect overnight.

Caps have been removed for weddings, funerals and religious events, with attendance instead subject to one person per two square metres.

Patron limits at pubs, cafes and restaurants have also been scrapped, but venues must observe the rule of one person per two square metres. Customers will no longer have to be seated for service.

Western Australia is increasingly likely to proceed with reopening its borders within days after fears of a NSW coronavirus outbreak were allayed.

Premier Mark McGowan will reveal his decision on Monday, having taken the weekend to receive further test results from NSW.

Mark McGowan has labelled a border bungle that allowed two international travellers to board a domestic flight from Sydney to Melbourne “obviously concerning” but the lapse appears unlikely to delay his decision on NSW/VIC border. #wanews https://t.co/ARwUftCrSi

No locally acquired cases have been detected after a Sydney quarantine hotel cleaner caught the virus at work.

WA is scheduled to open up to NSW and Victoria from Tuesday, dropping the 14-day quarantine requirement for travel from those states.

The McGowan government is also set to review health advice this week regarding travel to and from South Australia, which remains subject to hard border restrictions after experiencing a cluster of locally-acquired cases.

Britain is preparing to become the first country to roll out the Pfizer/BioNTech COVID-19 vaccine this week, initially making the shot available at hospitals before distributing stocks to doctors' clinics, the government has said.

The first doses are set to be administered on Tuesday, with the National Health Service giving top priority to vaccinating the over-80s, frontline healthcare workers and care home staff and residents.

The first pictures have been released of freezers packed with coronavirus vaccines as hospitals prepare to start the first phase of the "largest scale vaccination campaign" in UK historyhttps://t.co/PvZSglNzqr

Britain gave emergency use approval for the vaccine developed by Pfizer and BioNTech last week - jumping ahead in the global race to begin the most crucial mass inoculation program in history.

In total, Britain has ordered 40 million doses. As each person requires two doses, that is enough to vaccinate 20 million people in the country of 67 million.

About 800,000 doses are expected to be available within the first week.

The jury in Jarryd Hayne's rape trial will resume its deliberations on Monday after a deadlock over unanimous verdicts on the two charges the former NRL star faces.

The jury of eight men and four women sent a note to Newcastle District Court judge Peter Whitford on Friday, after about eight hours considering their verdicts, saying they were unable to agree unanimously.

Judge Whitford said he would give them more time to re-examine matters they disagreed on, with the option of continuing on Friday afternoon or returning on Monday.

The jury elected to return on Monday.

US President Donald Trump has appeared at a rally in Georgia for Republican senators Kelly Loeffler and David Perdue and recycled the falsehood that he won the state.

"You know we won Georgia, just so you understand," Trump told the large crowd gathered for the first post-election rally for the president, in Valdosta.

In fact, President-elect Joe Biden won the state of Georgia by about 12,500 votes out of five million cast.

Trump said he travelled to Georgia to help ensure the two Republicans win what are probably the most important Senate runoffs in US history.

Earlier, Trump has fruitlessly pressed Georgia's governor to call a special legislative session aimed at overturning the presidential election results in that state as Trump's fixation with his defeat overshadowed his party's campaign to save its majority in the Senate.

After Trump pressured Georgia's governor to help overturn Biden's win in the state, Republican Lt. Gov. Geoff Duncan says the President "did not win the state of Georgia": "As the lieutenant governor and a Georgian, I'm proud that we can see that this election was fair" #CNNSOTU pic.twitter.com/kxqFtRRGp2

Meantime, coronavirus infections across the US continue to rise with a new daily high of 228,000 new infections confirmed Friday.

A glance at Trump's Twitter account still full of false declarations of "I WON THE ELECTION, BIG" and "We will never EVER surrender" showing that the president has all but given up governing his country through a pandemic, instead focusing solely on the election results.

President-elect Joe Biden is warning Americans face a "grim winter" and is drawing up economic relief package which he is trying to get congress to pass immediately.

Hospitals across the United States are being put under immense pressure as the nation continues to hit record levels of new Covid-19 cases, adding more than 1 million new cases in the first five days of December.https://t.co/J8W5FTMHRF

- Queen Elizabeth and Prince Philip could be some of the first British citizens to receive the COVID vaccine due to their age and to help allay concerns over the vaccine.

- The Academy of Motion Picture Arts and Sciences is reportedly working towards an in-person Oscars next year, after pushing the date back from February, to the end of April.