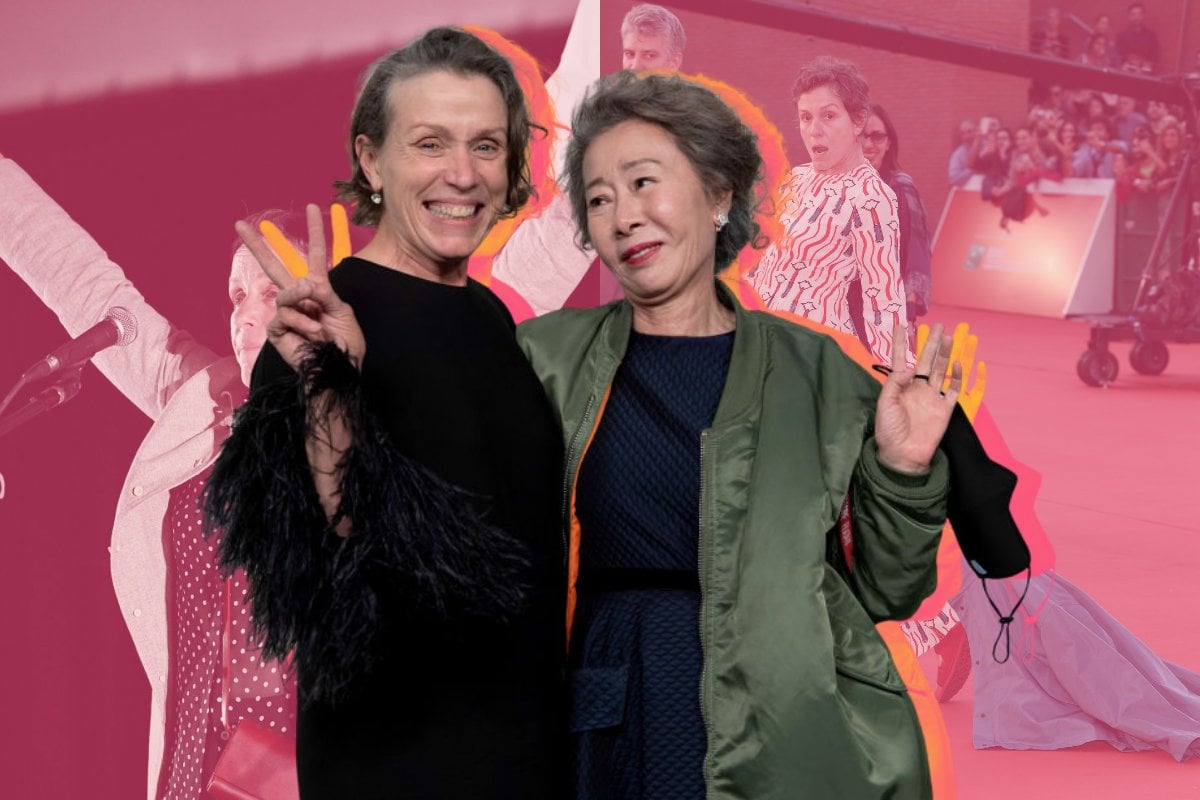 “My birth mother was white trash,” she once explained on radio.

McDormand, who has just won her third Oscar for Nomadland, was born Cynthia Ann Smith to a young single mum in Gibson City, Illinois, in 1957. At the age of one she was adopted by a pastor with the Disciples of Christ, Vernon McDormand, and his wife Noreen.

Side note: Remember when a guy tried to steal Frances McDormand's Oscar back in 2018? Post continues below.

Baby Cynthia’s mother is believed to have been a member of Vernon’s congregation.

The McDormands – a “solid, working-class, educated” couple – changed Cynthia’s name to Frances, and she became part of their big family.

Noreen McDormand had medical issues that stopped her from carrying children of her own, so she and Vernon fostered around nine kids, adopting three of them.

The family moved every few years, living in small towns in Kentucky, Georgia and Tennessee. In Tennessee, they lived in a part of town built on the town dump, and the kids would go “treasure hunting” there.

It was a childhood of hymn singing, bible camps and homemade dinners.

Frances McDormand would watch her dad preach on Sundays and, as the daughter of the pastor, would do her best to “toe the line”.

“We were the preacher’s kids, so wherever we lived my mother felt we just had to keep up appearances a little bit more,” she told The Guardian.

At high school in the steel town of Monessen, Pennsylvania, she discovered drama when her English teacher got the class to act out scenes from Shakespeare. She played Lady Macbeth, and loved it.

“It was the power of being a really shy, slightly suspect seventh-grader who could stand in front of a group of people and keep their attention,” she told The Irish Times.

From there, she started acting in school plays – never the lead, but always the most dramatic, loud character. She went to college in West Virginia to study drama,

It was in her late teens that she was offered the chance to meet her birth mother. She refused.

According to The New York Times, she believed “the anger she felt at being unwanted had become too important a part of her psychology”.

While at college in West Virginia, McDormand showed so much talent that her professors helped pay for her to audition for Yale Drama School.

After graduating from Yale, she moved to New York, where her roommate was an up-and-coming actress called Holly Hunter.

Hunter was spotted in a play by brothers Ethan and Joel Coen, who were casting for their first feature film, Blood Simple.

The Coens asked Hunter to be in their film. She knocked them back, because she had another play on, but told them about her roommate.

McDormand went along to audition, but said no to a callback audition, because she had promised to watch her boyfriend’s two-line appearance in a TV soap.

The Coens liked her attitude – and her talent – and gave her the role of Abby.

Blood Simple was the film that would change McDormand’s life. Not only did it make people sit up and take notice of her as an actress, it introduced her to her future husband.

While filming in Austin, Texas, McDormand ran out of books to read and asked Joel Coen for recommendations.

Giving her a stack of Raymond Chandler and Dashiell Hammett novels, he told her to start with The Postman Always Rings Twice.

“Which is one of the hottest books ever,” she told Vogue. “He seduced me with the choice of books. I seduced him by inviting him over to discuss them.”

For McDormand, the relationship was a revelation.

“It was: Wow! Really! Oh, my God! I can actually love and live — not subvert anything, not apologise for anything, not hide anything,” she told The New York Times.

The Coens wrote the role of Dot in Raising Arizona for McDormand. She starred in other movies, including Mississippi Burning, but was knocked back for a lot of the parts she tried out for.

“I wasn’t pretty, I wasn’t cute, I wasn’t beautiful, I didn’t have the body,” she explained.

Then came the role that would win McDormand her first Oscar: pregnant police chief Marge in the Coen brothers’ movie, Fargo.

There’s a reason that the Coen brothers wrote Marge as pregnant.

In real life, McDormand and Joel Coen had been struggling with fertility, and had decided to adopt.

When McDormand shot the scene where Marge’s husband Norm rubbed her belly and said “two more months”, she knew her son, Pedro, would be arriving from Paraguay in two months’ time.

"I didn't give birth to my son, I met him at six months old," she told the Belfast Telegraph, "but from the minute I held him and smelled him, I knew it was my job to keep him alive".

McDormand cut back on her movie roles so she could spend more time in New York bringing up Pedro. She and her son bonded over their love of fashion.

“Shopping is what he and I do together,” she said.

Pedro has grown up to work in a variety of jobs – as a personal trainer, in PR and as a crew member on some of his dad’s films – and still gives his mum fashion advice.

McDormand won a second Oscar in 2018 for Three Billboards Outside Ebbing, Missouri – a role she had to be pushed into accepting, because she thought she was too old.

Finally my husband said, 'Just shut up and do it,'" she revealed at a press conference.

As for her character Fern in Chloe Zhao’s movie Nomadland, it’s perhaps closer to reality than almost anything McDormand has played before. She’s dreamed of turning her back on the movie industry and driving off in a van.

"Chloe tapped into the truth of it," McDormand told The Irish Times, "which was at different points of my life, I’ve said to my husband, ‘I can’t take this anymore, I’m dropping out'".

Zhao cast one of McDormand’s oldest friends as her sister in the movie, but McDormand drew the line when Zhao suggested featuring her husband and her son Pedro in it too.

“I have to believe that it’s not just a documentary of me,” McDormand said. “I did create a character, just like I’ve created myself in 63 years, too.”