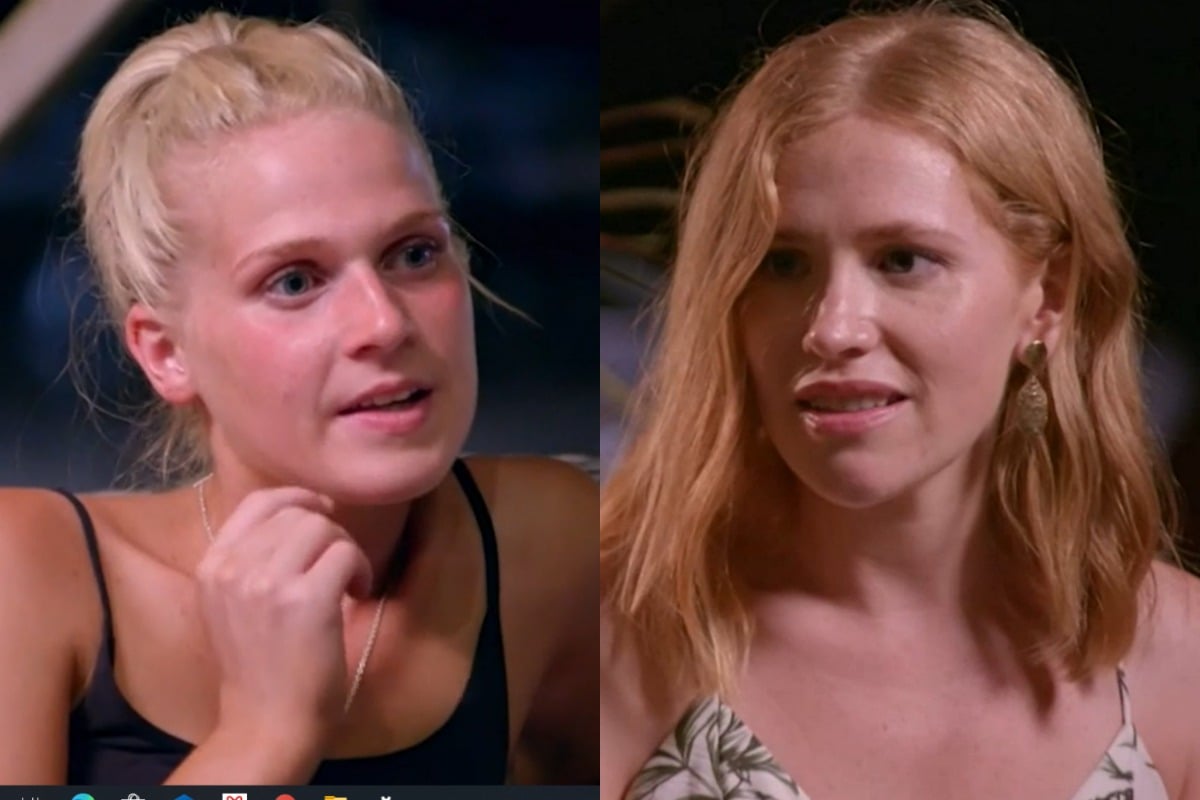 We open on some horses having a gossip. 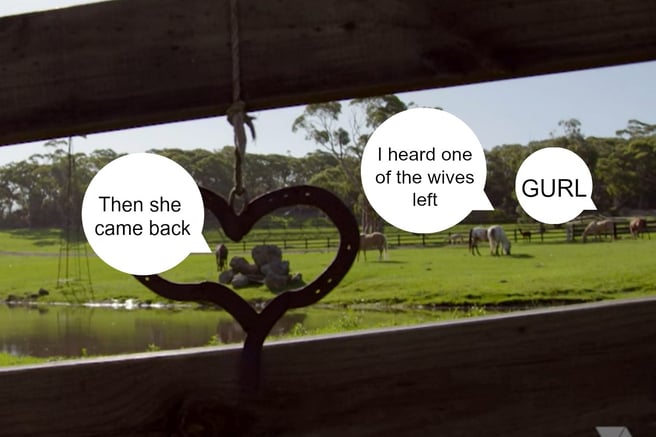 WHAT A BLOODY PLOT TWIST.

It's one-on-one date day and the farmers are showing their chosen wives what the country has to offer. 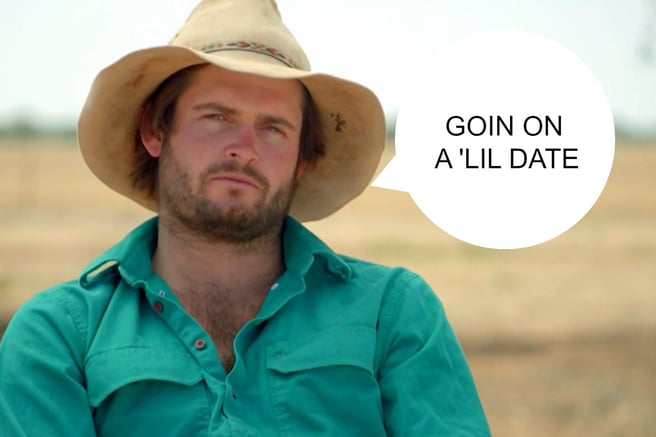 WITH A TOP SHEILA.

Lee tells Neil that finding the right girl is not unlike... mustering cattle. ¯\_(ツ)_/¯

"First you've got to cut em out, you've got to yard em up, and then when you find the one you want, throw a leg rope on her and she's yours." 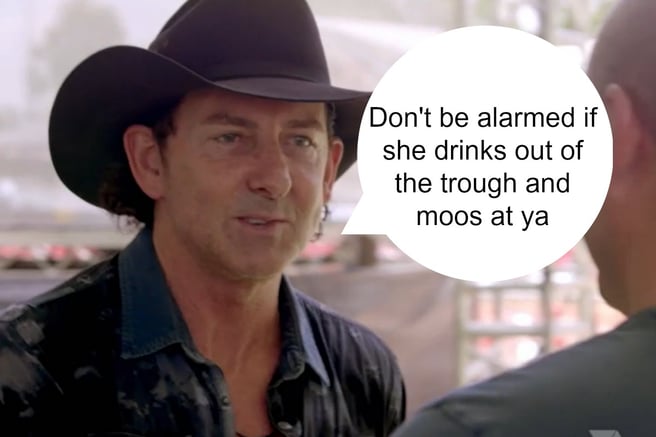 Over at Farmer Harry's, Harry and Stacey have a picnic near the dam and talk about their future kids.

They seem to speak with the exact same accent which bodes well for them.

Farmer Sam takes Emily to a watering hole (?). They sit on some rocks and he tells her she's made his heart beat again. Which is kind of alarming but ok.

Farmer Neil and Karissa have a beer in Tamworth and reflect on that one time Lee Kernigan compared her to a cow. It was very weird of him.

Over at Farmer Nick's, he and Emma are eating some oysters. That is... all. That's the whole scene.

Farmer Alex says he wants to explore some of that "sexual chemistry that's been gettin' bout" between him and Henrietta so he's arranged for them to have a bath in the middle of nowhere.

They get into a bath which also looks exactly like the trough the cows drink out of.

It looks... uncomfortable. And also there's far too much foot to camera action for my liking. 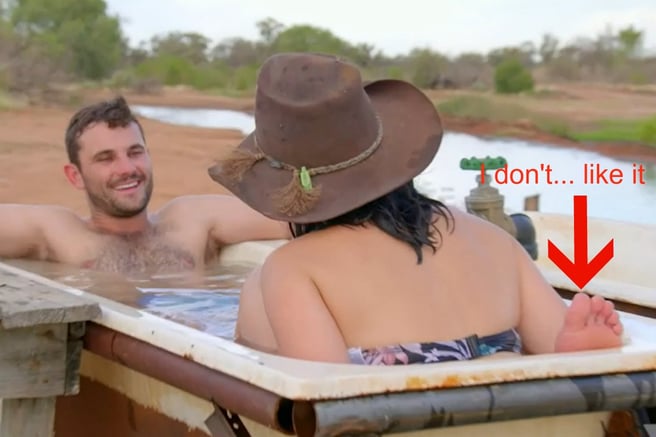 FEET SHOULD BE A SECRET.

Once they've figured out how to fit two adult human bodies into a cow's water bowl, they share a kiss.

Henrietta is confused as to why the other three wives are still at the farm when they haven't even kissed in an awkward looking bath... with feet involved.

DO THE WORK, LADIES.

It's the morning after the one-on-one dates and the other wives are keen to know whether the chosen wife kissed their shared husband. 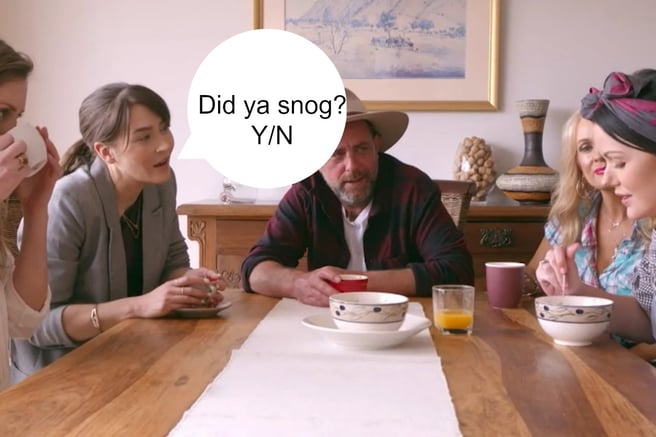 The farmers take their farmhands wives out to work on the farms again. 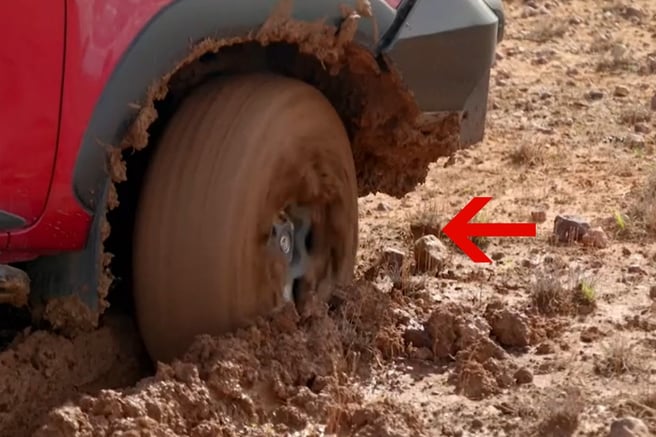 The farmers and their wives meet for dinner so the farmers can decide which wife to kick out of the harem.

Over at Farmer Neil's, he says he's not ready to send anyone home.

Farmer Harry says he's not sending anyone home either.

Kirsten tells Farmer Sam that she doesn't want to be in the harem anymore and would like to bid him and her fellow sisterwives farewell. 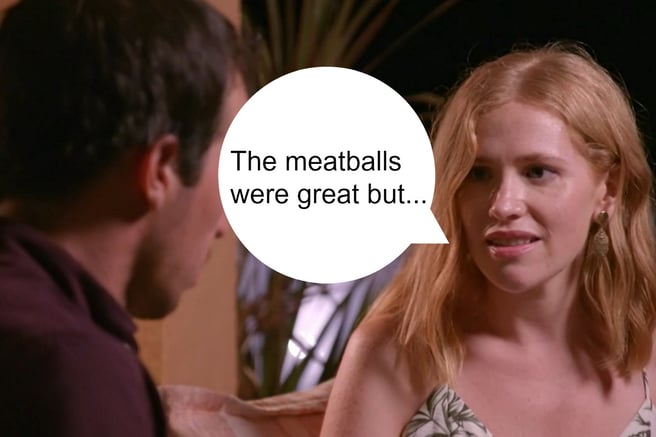 Over at Farmer Alex's, Jess explains that she doesn't want to be in a harem watching someone else fall in love and she'd be ok if he sent her home. 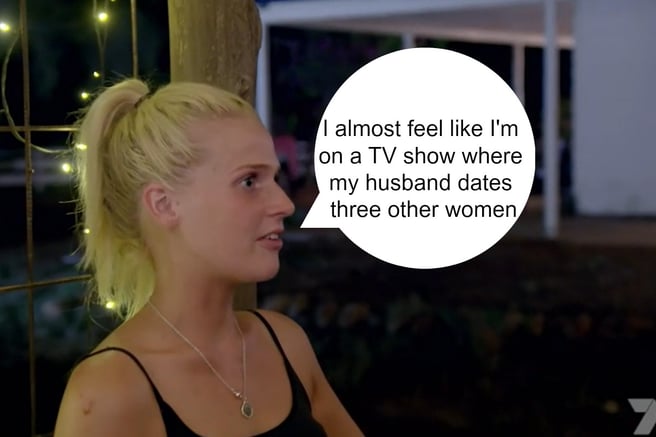 "It doesn't make sense to me."

However, Alex decides to keep the harem in tact. Because someone has to shovel the cow shit in the morning.

Farmer Nick decides to send actual angel Marnie home before they even got to have a date and realise they were bloody perfect for each other.

At this rate all the women are going to send themselves home before the farmers make ANY GODDAMN DECISIONS.

THIS IS NOT HOW IT'S MEANT TO WORK.

THEY SEEM TO HAVE FORGOTTEN THE WHOLE PREMISE OF THE SHOW.

WHY AM I YELLING.