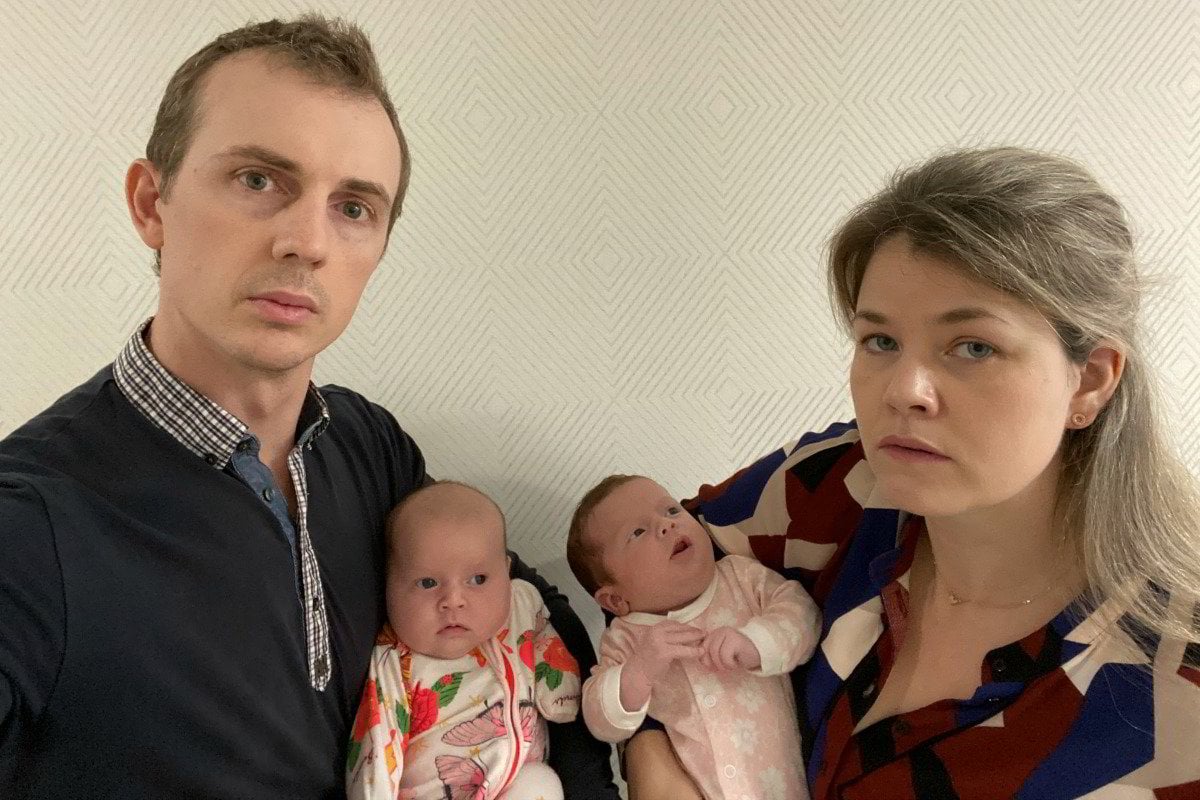 They left to pick up their twin baby girls, Odessa and Starla, who were born via a surrogate in Kiev, Ukraine.

They had applied for, and been denied, an exemption three times before finally being approved for travel.

Now, they're trapped Kiev, and it will be at least 16 weeks before they're allowed to return.

They're separated from their sons aged five and two, who remain in WA with their grandmother.

The couple, both 34, are devastated, exhausted, and furious at the Australian government.

WATCH: Not long after Candice and Chris left the country, the flight cap numbers were introduced. Post continues after video.

"That hit me really hard. He was stoked, but no one was there. Mum was looking after Arlo, so friends of ours took him and there are photos of him with the other kids and they're all with their parents and he's got no family there. It's just shitty," Candice told Mamamia.

Every day, there's a new heartbreak. Like on Father's Day, when Beau drew a picture of himself holding a gift, next to a drawing of his dad depicted on a computer screen.

Or the pleas from Beau over Zoom to "come to them instead." It has already been 10 weeks, and they don't know how to break it to their son that he will have to wait another six weeks at least. 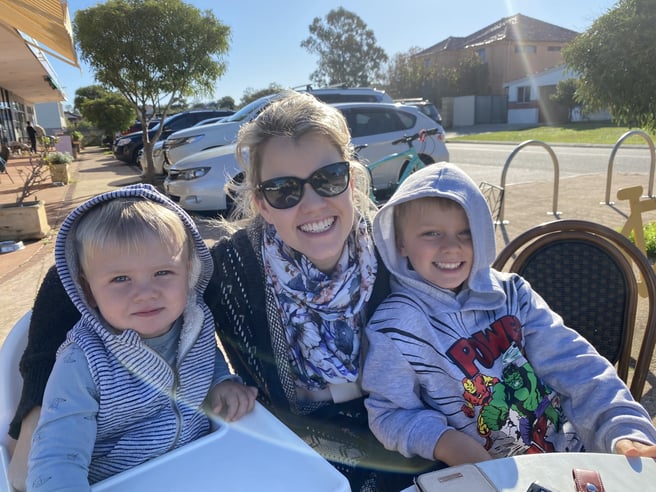 Arlo, two, doesn't understand what's going on but cries when he sees his parents on a video call. Candice and Chris are worried he will end up with abandonment issues.

The Perth family aren't the only ones in this predicament. There are currently tens of thousands of Australians trying to get home right now. But the government's daily cap on arrivals is causing severe delays for many.

"It's just awful and we feel completely abandoned by the government. And Scott Morrison puts on his page RUOK? the other day and it's like no. Who are you asking? Just the Australians who are in Australia?" Candice told Mamamia.

Of approximately 90,000 Australians who applied for exemptions to leave the country between March and August, only a quarter have been granted. The 20,000 or so who were allowed to leave, were only given the green light because of extremely extenuating circumstances like theirs.

On top of that, there are the Australians who have been living overseas and are now trying to get home to sick relatives, or after losing jobs and visas. There's a complete bottleneck of people trying to come home.

The Australian government's reassurance that our borders aren't closed to passport holders means very little to Candice who believes they are simply hiding behind the flight caps. The couple has been forced to think about everything from entering the country by sea, to seeking asylum overseas.

"Our passports mean nothing. They're worthless. They're an ID card. It doesn't get us home. We have a home there, we have kids. We are being separated from our young children. It's just disgusting, I am appalled by our government. Absolutely appalled," she said. 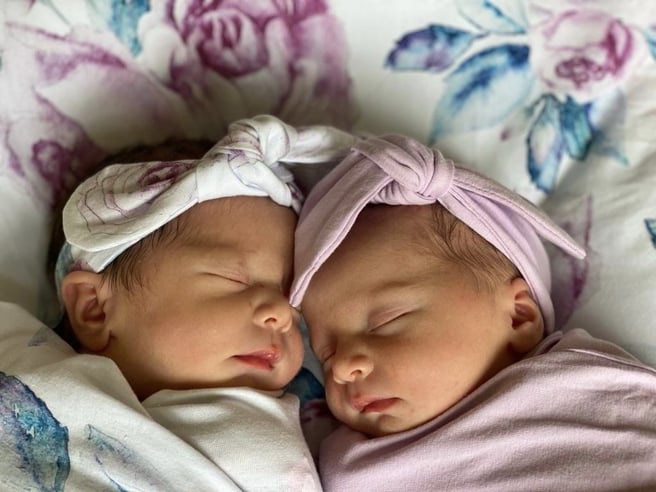 Odessa and Starla Dix were born via surrogate in Ukraine. Image: Supplied.

On Friday, they had a breakthrough. Qatar Airways offered them a flight home to Adelaide in economy on September 26, at a cost of $10,000.

But there's no guarantee that it will even go ahead.

If they do get to Adelaide they will be facing a total of four weeks in quarantine in both South Australia and Western Australia at their own cost, before they're finally reunited with their sons.

All up, they've worked out the flight caps are costing them $40,000. On top of that, they're paying accommodation in two countries, and, because the passport office told Centrelink they were abroad, they've had their means tested childcare subsidy cancelled.

"Because the legal guardians aren't in Australia... that's their policy, they just canned it. They didn't even notify us. We had to increase our two-year-old's daycare days to three a week, so my mum could cope. She's in her 60s, and she's got arthritis. So now we're paying $120 a day for that," said Candice.

With Chris on leave without pay, and Candice on maternity leave, they're struggling financially.

They're also worried about how they will cope parenting two newborns in hotel quarantine.

"They're charging people $25-35 for 10 items of washing. We're doing so much washing, one of our little girls has reflux... we wash all the time. At the moment we've got three rooms here, and we're going mental. To have one room with no microwave, no sink to wash the bottles, nowhere to sterilise them for four weeks. I don't know mentally how we're going to come out of this because I'm done. I am so done."

At the moment, Ukraine is recording more than 2000 new cases of coronavirus a day, and the couple have bunkered down in their Airbnb with their babies, who are now about to be overdue for their immunisations, doing everything they can not to expose themselves to the virus.

"I am an occupational hygienist. I have been working on our (Australia's) COVID response for months. We wore P3 respirators coming here. Chris clean shaves every time he leaves the house for a supply run," said Candice.

As far as she is concerned, their young family is taking more appropriately rigid precautions than the Australian authorities and hotel quarantine security guards back home. 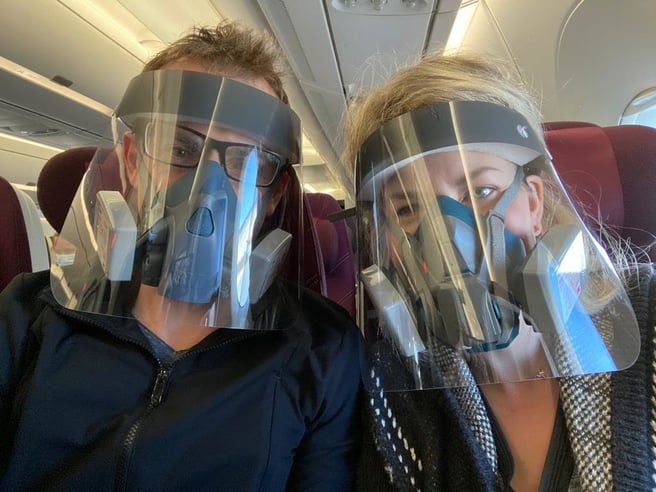 Chris and Candice have been wearing P3 respirators whenever they leave the house - which since the girls were born, is only when Chris needs to pick up supplies, or their mental health demands it. Image: Supplied.

"Do they even change the pillows after each stay?" she asked. "I can see there aren't the right controls just from photos. It would be way safer to send me to my home where I can mentally cope, but also make sure my family's safe and use the right cleaning products to make sure our house is safe before my kids come back to it."

With actors and celebrities seemingly getting a free pass, and 300 international students being given the green light to re-enter South Australia from Asian countries, the Dix family say they are feeling abandoned.

The twins were supposed to be their rainbow.

Candice nearly died delivering Arlo and doctors had to remove her uterus to save her life. Surrogacy, which they saved for years for, was their happy ending. It was their chance to complete the family they'd always dreamed of. 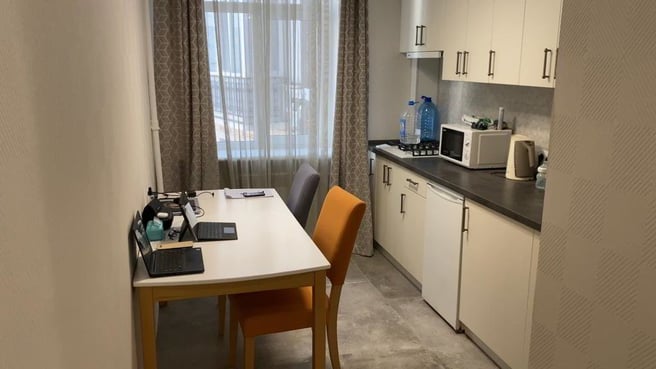 The couple, and their twins, are holed up in a Ukranian Airbnb, where they spend their days calling and emailing Australian authorities, trying to get home to their sons. Image: Supplied.

But now, instead of celebrating their six week old daughters with their family, they're being forced to watch as four flights a week leave Kiev for Australia with them on board.

That's more than 5000 seats coming home every week, with only 525 seats taken.

"Qatar can whack us on a flight tomorrow. We just need that exemption letter and we can be home tomorrow," Candice told Mamamia.

But so far, despite numerous emails and phone calls to the state and federal governments, they've had no luck and must continue to connect with their confused young sons via Zoom calls.

Reply
Upvote
Why did they both go? In July it was very clear that re-entering would be hard, they could have left one parent here with the kids.
G
guest2 2 years ago

Reply
Upvote
2 upvotes
@cat Perhaps both parents had to be there for legal reasons?   If not, I doubt many women would fancy travelling alone on what would be several flights, with newborn twins.
C
cat 2 years ago

Reply
Upvote
@guest2 I wouldn’t fancy it either, but I’d probably do it if the other option was leaving the 2 other kids without a parent for months or a year.
<
<deleted> 2 years ago