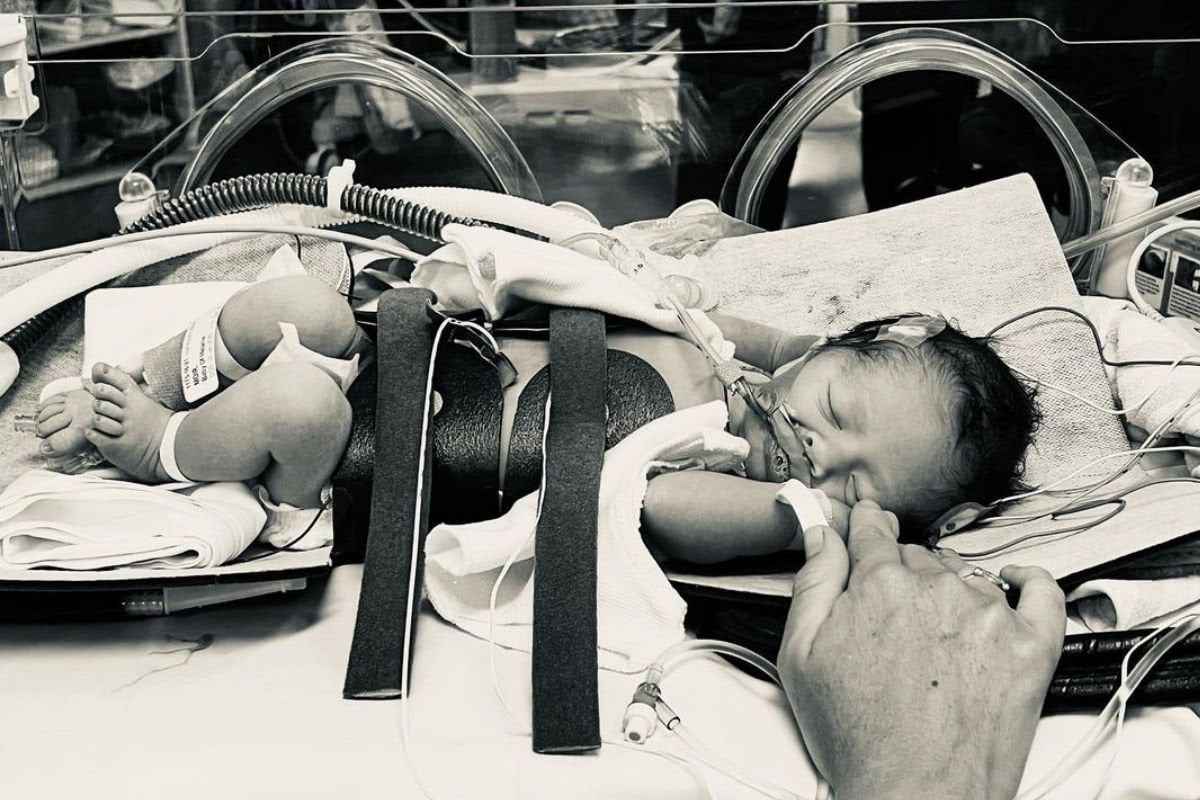 Ethan Moir was born on his parent's bathroom floor on a Sunday morning in early January.

His mum, a midwife, hadn't expected him to come quite so quickly.

Melanie Moir's water broke at 5am on January 2. By around 6.15am, she was delivering her own son while on all fours, after realising mid-shower there was no way they were going to make it to hospital.

It didn't take her long to realise something was wrong.

"I started using the towels and drying the baby and stimulating him. He was just very floppy, and he wasn't sort of responding to any of my stimulation. He was literally white as a sheet," Melanie told Mamamia's daily news podcast The Quicky.

Listen to Melanie on The Quicky. Post continues after podcast.

"Normally, babies come out a bit blue, and then you give them a rub, and they turn nice and pink. His colour wasn't changing. He wasn't really making any effort to breathe, he was just kind of lying there floppy in my arms," she said.

Panic set in. Melanie's husband Alex was already on the phone to 000, and she could hear him giving over their details after being connected to NSW Ambulance.

"How long till they get here?" she yelled at him. "He's not responsive!"

"I started giving him breaths, and then I told Alex to get me a stethoscope... thankfully he did have a heartbeat. It just wasn't very strong, and it wasn't beating as fast as it should be. But I knew he was at least getting blood flow... and the placenta was still connected," Melanie told The Quicky.

She breathed a small sigh of relief; she knew she had time. Not much of it - but enough if the ambulance was on their way.

"How long until you get here?"

"How long until you get here?"

Alex Moir was desperate. He'd been told by the NSW Ambulance call centre that there were no vehicles available to help them. But he kept asking.

They'd been told an ambulance could "probably" be dispatched from Mascot "soon."

Mascot was 10 minutes from the Moir's house, and then they were a 10 minute drive to the hospital.

"I think it was only maybe seven or eight minutes that he was on the phone to the ambulance. But it was after the third or fourth time that she had sort of said, 'I can't do an ETA' that he said [to her], 'Is it going to be quicker for us to drive?'" Melanie said.

"I had to strap my wife, Melanie, into our car while she held onto our newborn, who was white as a ghost, and risk the drive to hospital ourselves, all while she gave CPR to our boy.

"Thanks to the incredible Midwives, Nurses and Doctors at The Royal Hospital for Women in Randwick, our Ethan has made a full recovery after a week in NICU. Melanie is a trained midwife, perhaps it was destiny that she was able to deliver her own child while in the pain of labour and keep him alive en route to hospital. She is a hero like so many mothers, but what if she wasn’t a trained medical professional? What if we were ordinary people reliant on health services? We were told that if we had waited for an ambulance, our Ethan might have died," he wrote.

Melanie knows they were lucky to get a happy ending. Lucky that she had the expertise to deal with that particular medical emergency.

"But it does really scare me," she told The Quicky. "I've got a lot of friends who are pregnant or recently had babies, and to think of any of them in that situation... it just blows my mind that we're in this situation right now. No one should have to go through that."

The reality of a hospital system that isn't coping.

Last week, Prime Minister Scott Morrison stood in front of the Australian public and informed us hospitals were ready for Omicron. That we had the resources available and the beds to treat sick Australians.

As an anonymous Victorian nurse reiterated on Mamamia this week, "he lied."

"This week alone I have heard recounts of near misses from every sector, stories of people being overworked, understaffed, and desperate for help. But you wouldn’t know it if you listened to the Prime Minister," she wrote.

"We are struggling. We are crumbling. The healthcare system is failing, and I am terrified that it is too late and that Victorians will suffer, unnecessarily, as a result."

The same scenario is playing out in NSW hospitals, where COVID case numbers continue to skyrocket.

Alex Moir isn't afraid to mince his words. He is blaming government incompetence for their son's near death.

"You have had two years to bolster health services, to prepare for the worst and expect to be overwhelmed. Two years to prepare before this child ever existed. And yet, when we called 000 at 6am on Sunday morning after Ethan was unexpectedly born on our bathroom floor and wasn’t breathing or moving, we were told there were no ambulances available to dispatch and the wait time was unknown," he wrote.

"I’m disappointed at myself that it took this experience to be exposed to how utterly cruel your incompetence is. The hospital staff are the most inspiring individuals I’ve had the privilege of meeting, but everyday we overheard conversations about how they are overworked, understaffed, and under supplied; how they are forced to take sick leave unpaid, as well as having leave revoked; how everyday they cannot provide the care they want to and are on the verge of breakdown. Yet you pretend it’s coping," he continued.

Dr Belinda, a doctor working in an ICU unit in an Australian hospital, says the staffing crisis we're currently facing in healthcare is like the "unspoken elephant in the room."

"I think there's still a lot of attention on the case numbers, the death rate, the hospitalisation rate... but really when people look at an intensive care mission, there's more to it than those numbers. It's not just about physical bed space, it's not just about whether we have a ventilator to put a patient on... the real key is, do we have human beings? Do we have the staff to look after that patient?" she told The Quicky.

The Morrison government has changed isolation and testing protocols this week in an effort to try to free up more staff. But the system is buckling.

"I think the NSW Premier has to spend more than one day looking at statistics and actually spend a week in emergency... and let him sit with his own eyes what is strong and what is not," Michelle, a senior ICU nurse, tells Mamamia. https://t.co/BovWgPSHxr

Professor Bruce Thompson, Dean of the School of Health Sciences at Swinburne University of Technology, and an expert on clinical respiratory measurement, says the cancelling of elective procedures in New South Wales, South Australia and Victoria, is proof our hospitals are already at capacity.

"It means we start displacing other things that might not be urgent," he told The Quicky.

The Moirs know what that looks like. As a healthcare worker herself, Melanie knows the system wasn't bolstered enough before COVID hit, let alone now. But she didn't expect it to be so bad that she would be left to save her critically ill newborn alone.

As Alex points out, had his son died, his death wouldn't have been counted in any COVID metrics.

"How many deaths are on your hands outside of this pandemic?" he asked the government.