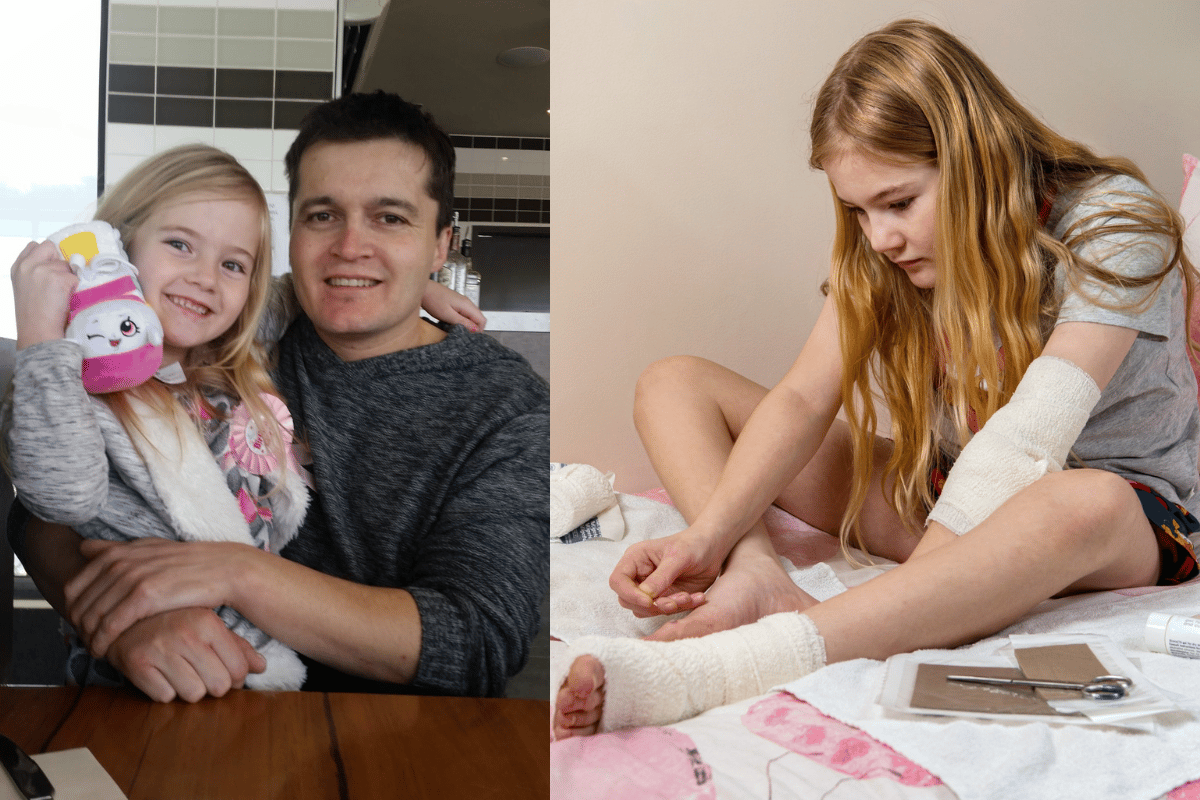 When Melanie first saw a blister form on her daughter Zoe's ankle, she fainted. Because she knew straight away what that meant for her little girl's future.

Zoe has Epidermolysis Bullosa, often known by its abbreviation EB. It's one of the worst diseases that you have probably never heard of - a rare genetic skin condition that results in very fragile skin. The skin is so fragile that it can be injured easily, resulting in blisters and wounds - often occurring across the body, and sometimes in the mouth.

Kids like Zoe are often known as 'butterfly children' - because their skin is as fragile as a butterfly's wings.

The reason Melanie knew almost instantly her daughter had EB was because her husband David has it too.

"In the early days of our relationship, David and I went bowling with a group of friends and I noticed something on his hands. He told me he had eczema. Only later he felt comfortable to tell me about what it really was," Melanie said to Mamamia.

When David was born, his EB was very severe - his skin was almost red raw. And throughout his life, his EB has gone through stages from manageable to really painful.

"He suffers from a combination of internal and external wounds," Melanie explained. "David is someone who puts up with a lot, but recently as he's getting older he has noticed that his skin is starting to break down. It's sad to see - he can't do the gardening much anymore, but he still pushes himself to play golf because he loves it. He'll pay for it afterwards though."

Every person diagnosed with EB experiences a different severity - it's therefore often left up to the person to manage what they can and can't do to avoid a serious breakout.

The couple had always known there was a chance their children could have EB - doctors had told them they had a one in two chance of passing the condition on. But it was a fact Melanie had never properly grasped when she was younger.

"When I fell pregnant with [our eldest son] Josh, it wasn't planned. We were really excited, but as the pregnancy went on, I started to worry. It was when we started preparing to buy baby clothes and I realised the work it would take. For example, the material of some clothes would be too scratchy and rough on the skin for a baby who had EB," Melanie said.

Listen to Mamamia's No Filter. Post continues after audio.

Thankfully, when he was born, the couple's son Josh, now 20, didn't develop the condition. Nor did their daughter, Jamiee, 14, six years later.

But when Melanie fell pregnant with her third child, Zoe, she somehow had a gut feeling this baby wouldn't be as lucky as the eldest two.

"We were at the 20 week scan, and I remember seeing the 3D scan of little Zoe - when the images came up on the ultrasound I saw how similar she looked to David. And I just thought to myself 'this baby has got it'. And I was right."

It was a very stressful pregnancy overall, with Zoe born at 30 weeks and put into the newborn intensive care unit.

At first, her skin was completely intact. But when Zoe was just 13 days old, one of the nurses alerted Melanie to a nasty-looking blister on Zoe's ankle - and Melanie froze.

"I remember the NICU lady saying to me, 'don't worry, it's just a blister, probably because of her fragile, premature skin.' But I knew straight away. I was an absolute mess, just beyond devastated. I fainted. David was cut up too. And so were both of our parents - mine in particular were devastated, especially because at the time Zoe was still a premie baby - so it was overwhelming."

Zoe was soon diagnosed with the most severe types of EB: Epidermolysis Bullosa Simplex. And over the years, it's been a big learning curve for Melanie and the whole family. 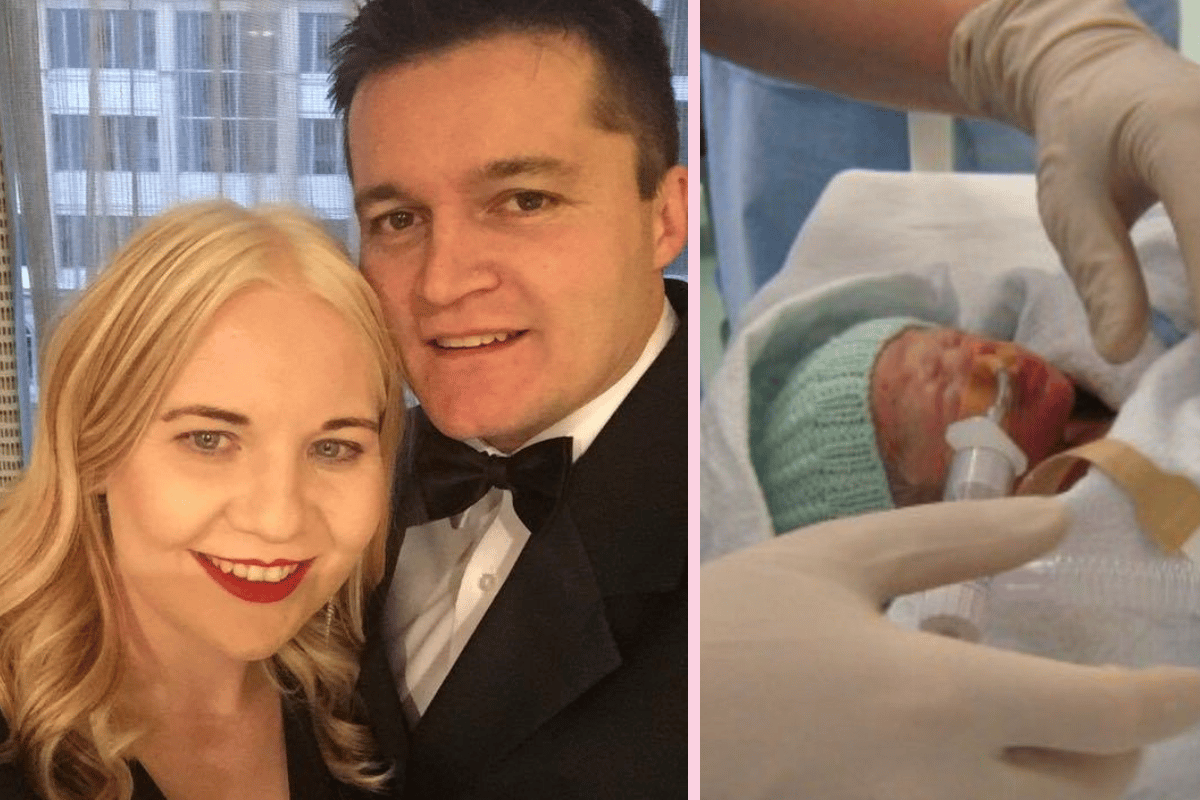 Melanie and David, plus little Zoe after being born. Image: Supplied.

The first few years of Zoe's life were a learning curve for Melanie.

Fortunately, the family live in Victoria and are near the Children's Hospital which runs an EB clinic - meaning Zoe has had plenty of visits there throughout her years.

"When Zoe was a toddler I went shopping with her and my mum. It was a really hot day and it was such a nightmare trying to get her into her car seat without hurting her skin. When we got out of the car and I was getting the pram organised, my mum said to me 'don't freak out but Zoe's got a new blister on her neck'. And I just lost it in the car. I was so upset because I had been so careful with muslin wraps and sheepskin covers on the harness. But the EB had won once again."

Starting school is challenging for any child, but for Zoe it was an even bigger adjustment.

She had to wear a different school uniform. She had to find the language and understanding to describe EB to her peers. And she also had to be careful with her skin and learn her limits.

But as she's got older, Zoe has learned to make the best of things.

Now at 12 years old, she has made the table tennis team at school, loves playing with her great group of friends and spending time with family.

But there are some days when her blisters are so severe, she can't write with a pen. She can't wear normal school shoes either, nor can she participate in many sports at school.

As for how she manages her EB, Zoe has to regularly pop her blisters and put a cream on them to stop the infection. She sometimes has to put bandages around them too. There's nothing she can do to stop them from appearing - it's simply about management and preventing serious infection. Some individuals with EB can have wounds over a large portion of their body and require bleach or vinegar baths.

"She can get really annoyed and frustrated, which is completely understandable. She gets these painful blisters and wounds all over her body, her skin is just so delicate. If she can't pop a blister herself, like one on her back or her face, she will get David to help her - he has the special touch apparently," Melanie said.

"You just can't win. The fear of missing out is real - so she pushes herself to do what everyone else does often. She's a little pocket rocket."

David and Zoe have very similar interests which makes them close - but they rarely talk about EB with one another. As Melanie said to Mamamia, there's been a strong emotional bond between the two and David has played a big role in Zoe's EB journey, especially when she was young. But David is just as close with his two other kids as well - overall, they're a tight-knit family. 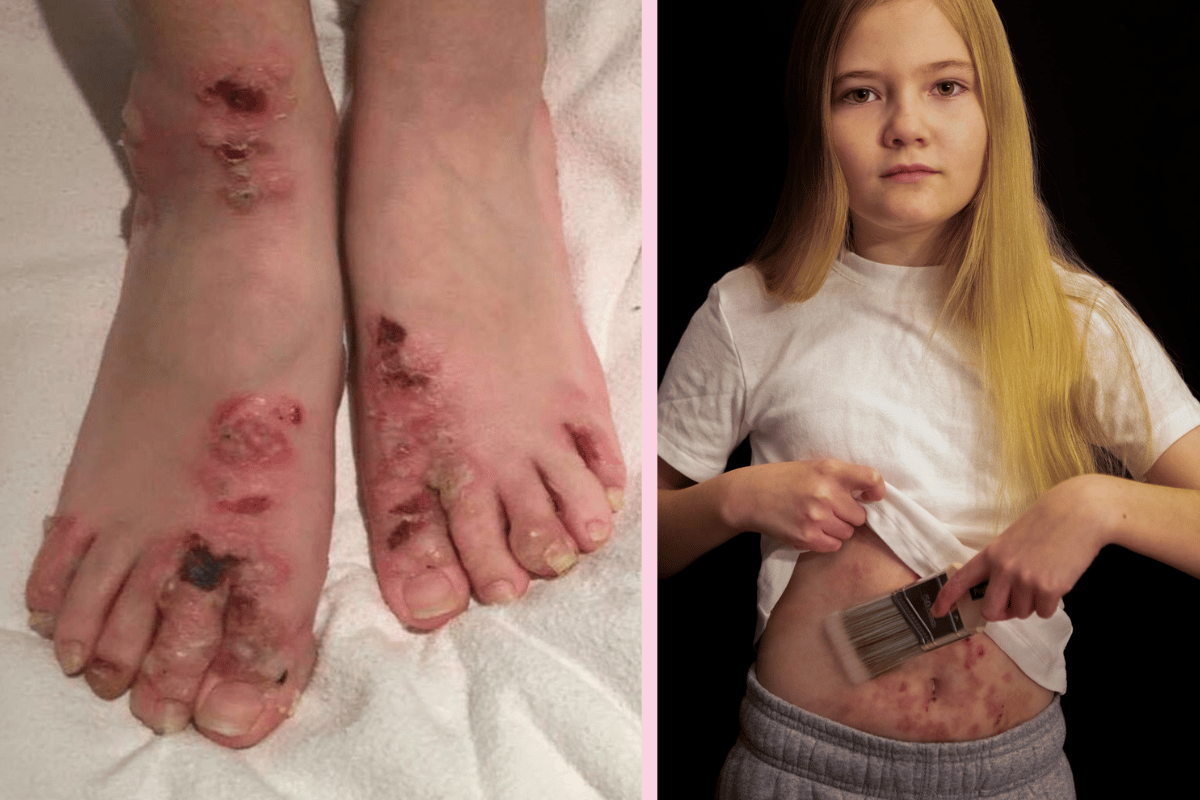 Some of the blisters and scars Zoe has on her feet and torso. Image: Supplied.

Over the years, Melanie has seen firsthand how judgemental some people can be.

"Often it's strangers who have made a judgement. When Zoe was around 12 months, we were at the shopping centre and this random woman came up to us, ignored me, looked straight at Zoe and said: 'What did your naughty mummy do to you? Did she burn you?' I was shocked. When I turned to her and said it was a rare skin condition, she continued to ignore me."

Fortunately however, Melanie said that the people who matter most to them have been amazing - Zoe's school community, and their friends and family.

"We are all so proud of Zoe and what she has achieved. My two eldest are very protective of her - I think they understand that it could have very easily been them. And with that realisation comes a lot of empathy for Zoe and what she goes through," Melanie explained.

"Both her brother and sister have seen what Zoe goes through - and so they've taken her under their wing. Josh is now 20 and picks Zoe up from school sometimes, and Jaimee who is 14 helps Zoe at school and whenever Zoe goes to the sickbay."

Thankfully, in this day and age, there appears to be less stigma attached to those with facial and body difference, compared to David's generation when he was a little boy. And that's something Melanie thinks about - and hopes that trajectory continues to get better into the future.

"There's a lot more understanding towards diversity as a whole. There will always be nasty people - but there's less tolerance for those attitudes today, and people are probably more willing to stand up for those in need too. Maybe social media has been our friend in this specific instance, as it has created more visibility for people who have EB." 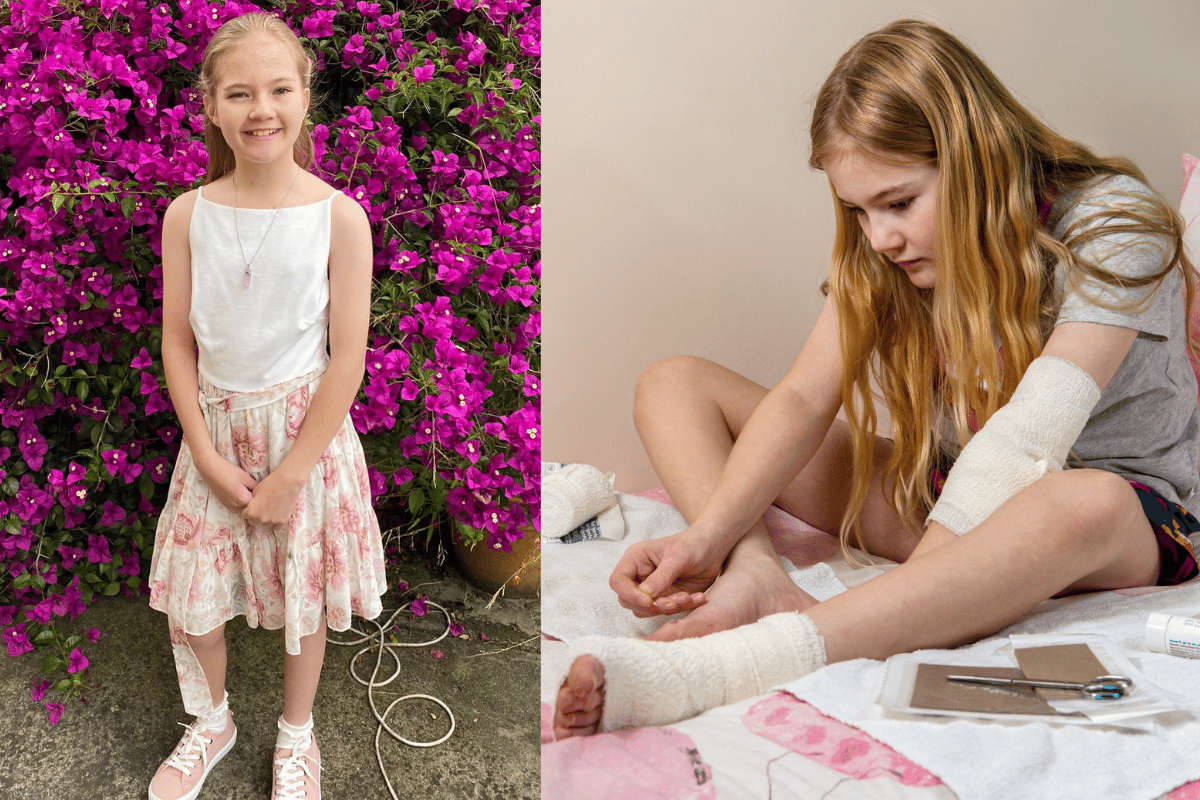 Melanie and her family are now part of the DEBRA Australia community, who support people living with EB.

Zoe was provided with a DEBRA-funded wheelchair when she was little, and has also had access to necessary creams and emotional support thanks to the EB charity. They also fund two pairs of special shoes a year for kids with EB, which is a lifesaver.

By sharing Zoe and David's story, Melanie hopes that people will have a greater understanding of EB - and remember that kindness is the nicest thing you can give to someone.

"The biggest thing for me is I want people to know that EB is not contagious. It is just visible. You don't need to be afraid of it or of people who have it. All you can do is be there for them."

For more information on Epidermolysis Bullosa or to donate, you can visit DEBRA Australia.