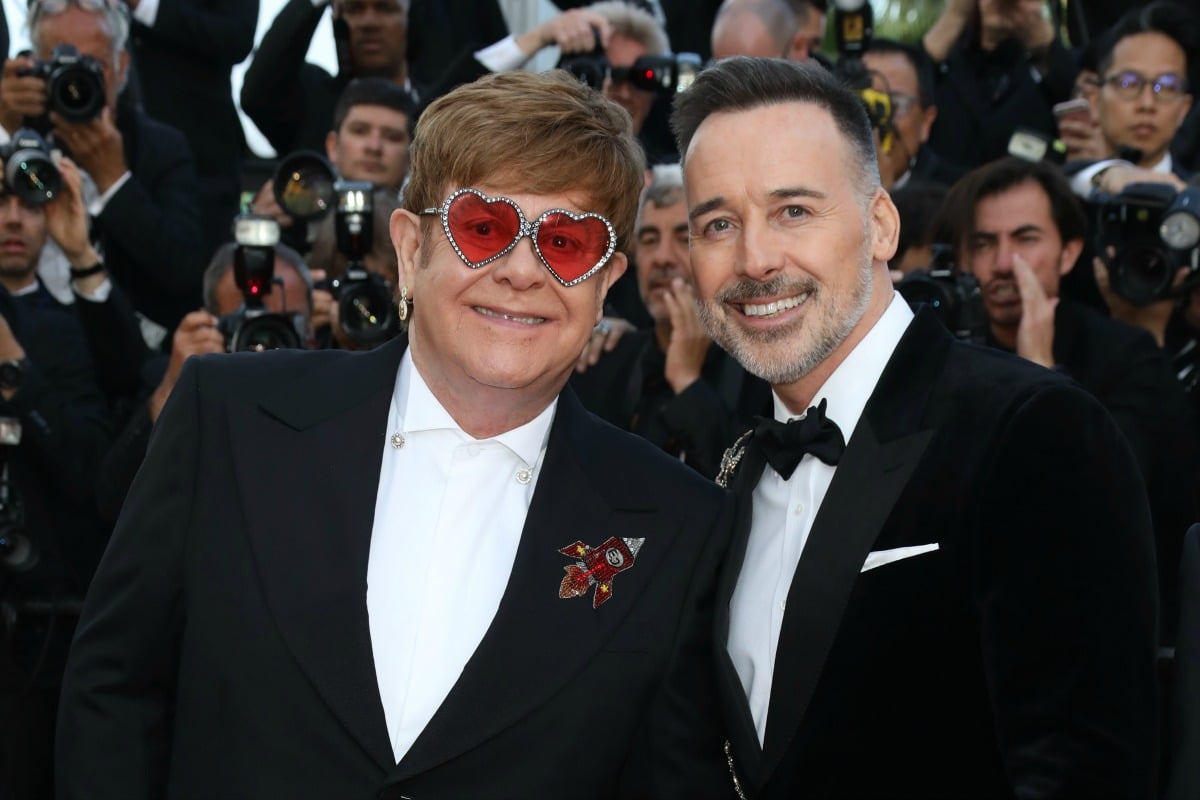 If you’ve ever caught a glimpse of Elton John with his family, it’ll spark joy in your heart.

Sidewalk kisses with his husband of 14 years David Furnish.

They are wonderfully down-to-earth and madly in love.

Summer’s over. Back to school. Back to work…..! @davidfurnish #FYBR

Looking at them you’d likely forgotten about Elton John’s past before his nearly three decades with David.

His confessions of being an “alcoholic, drug addict, sex addict, shopping addict and bulimic” a mere thing of his past.

But if you take a peek back in time, it hasn’t been the easiest road for the superstar, especially when it comes to love.

Watch the trailer for Rocketman below, the new biopic about Elton’s life. Post continues after video.

Here’s everything we know about Elton John’s love life.

Elton’s relationship with John features in the new biopic about his life, Rocketman.

Elton was 23 and went by the name Reginald Kenneth Dwight.

“I remember this hip, shy young man. There was this gawky sweetness about him,” John later told the Scottish Daily Mail.

They started working together. John was Elton’s manager for two decades, but they also struck up a secret romance.

"He was my first great love and I was his," John told the Daily Mail.

They moved into an apartment in London and battled addiction together, sought therapy together, and spoilt each other with extravagant gifts.

John played an integral part in transforming Elton from a $20 an hour singer songwriter into a global megastar.

They split after five years, but John remained Elton's manager for 25 years until 1988 when Elton became suspicious he was being taken advantage of.

They went to court in a lengthy legal battle over finances.

Linda and Elton were together for two years and engaged to be married.

But in 1970 their relationship ended abruptly when Elton came home in the early hours of the morning and told her it was over.

It's believed Linda is the inspiration behind his song 'Someone Saved My Life Tonight'.

Linda's relationship with Elton doesn't appear in Rocketman, which she is said to be disappointed about.

During an interview with Good Morning Britain earlier this year, she remarked "there's no resentment and there's certainly no bitterness [towards Elton]. I am very happy for him."

She told the show that their relationship had been smooth sailing up until he broke it off. The'd moved in together in London, and visited an antique shop to buy an engagement ring together. They'd even ordered a wedding cake.

"It’s true what the song says – he did come back at four o’clock in the morning and tell me that it was over.And that was the last time I've actually ever seen Reg [Elton John's real name],” she told GMB.

Although devastated at the time, Linda moved on long ago.

Melbourne born Gary was with Elton for two years, but his relationship overlapped with Elton's first marriage.

He allegedly slept with the singer days before Elton's engagement to Renate Blauel and even helped her shop for her wedding dress.

In it he recalls the pop star whispering to him after sex: “Don’t be upset, Chook, I have asked Renate to marry me.”

Gary suggests Elton's first marriage was a sham, suggesting the singer songwriter craved acceptance and staged the marriage as an act of defence.

Elton John's tour manager at the time Harley Medcalf told news.com.au of the wedding night, "There was lots of love. But at the same time, the boyfriend [Gary] was on the fifth floor of the hotel half out the window watching."

By this time, Elton had officially identified as bisexual to the public but his friends considered him gay.

He proposed to Renate over an Indian meal while touring Australia.

They married on Valentine's Day 1984; his ex boyfriend John Reid was his best man and the ceremony was attended by stars including Olivia Newton John and tennis pro John McEnroe.

Many believed Elton married out of his desire for a family, but the pair divorced after four years with no children.

They slept in separate beds, and a scene in Rocketman depicts the deterioration of their marriage as the newlyweds ate breakfast together in complete silence.

In 1988, People magazine reported Elton was continuing to meet male lovers at hotels while married.

After their divorce, Elton revealed he was indeed gay. In 2017 when Australia was voting in same-sex marriage, he spoke of how denying his sexuality at the time caused him great guilty and impacted his marriage.

In a 2007 Sydney Morning Herald interview Elton explained: "A drug addict thinks like this: 'I've had enough boyfriends, and that's not made me happy, so I'll have a wife - that will change everything'. And I loved Renate. I really, really loved her. But, you know it is one of the things I regret most in my life, hurting her."

He told the publication he'd recently dined with her and they "laughed and cried - we're adults. But I do regret [having hurt her]."

David is a film maker, producer and director. He met Elton in 1993 at a dinner party the star had organised in London in an effort to meet new friends.

"I was attracted to David immediately," Elton reflected in an interview with Parade. "He was very well dressed, very shy. The next night we had dinner."

Twelve years after they met Elton proposed over dinner in Windsor in 2005.

They were one of the first UK couples to form a civil partnership and got married nine years later when gay marriage was legalised in Britain.

Elton told People in 2017 his love for David has just "gotten better and better. Our love has grown stronger and stronger".

The couple's children - Zachary and Elijah - were born via surrogate, and just last year Elton announced he was retiring to spend more time with his family.

Birthdays don't come any sweeter than this! I want to thank all my friends and family for their kind birthday wishes. I am a very lucky man indeed. @eltonjohn #blessed #grateful #sharethelove

"Our boys came into our life at a late time," he told Good Morning America.

"I've never experienced anything like it, being a father and being a parent. There's no contest. I'd rather be with my children than playing shows."

When revealing glimpses of their family live, David and Elton says theirs is like everyone else's.

They read newspapers, drink coffee, play with the dogs, and watch TV with the kids.

Now that they're both at school, Elton says they need him even more.

In his 70s, after five years touring the world, he thinks it's about time he settled down.

Elton John is a great many things, but "wonderfully down-to-earth" is not one of those things.