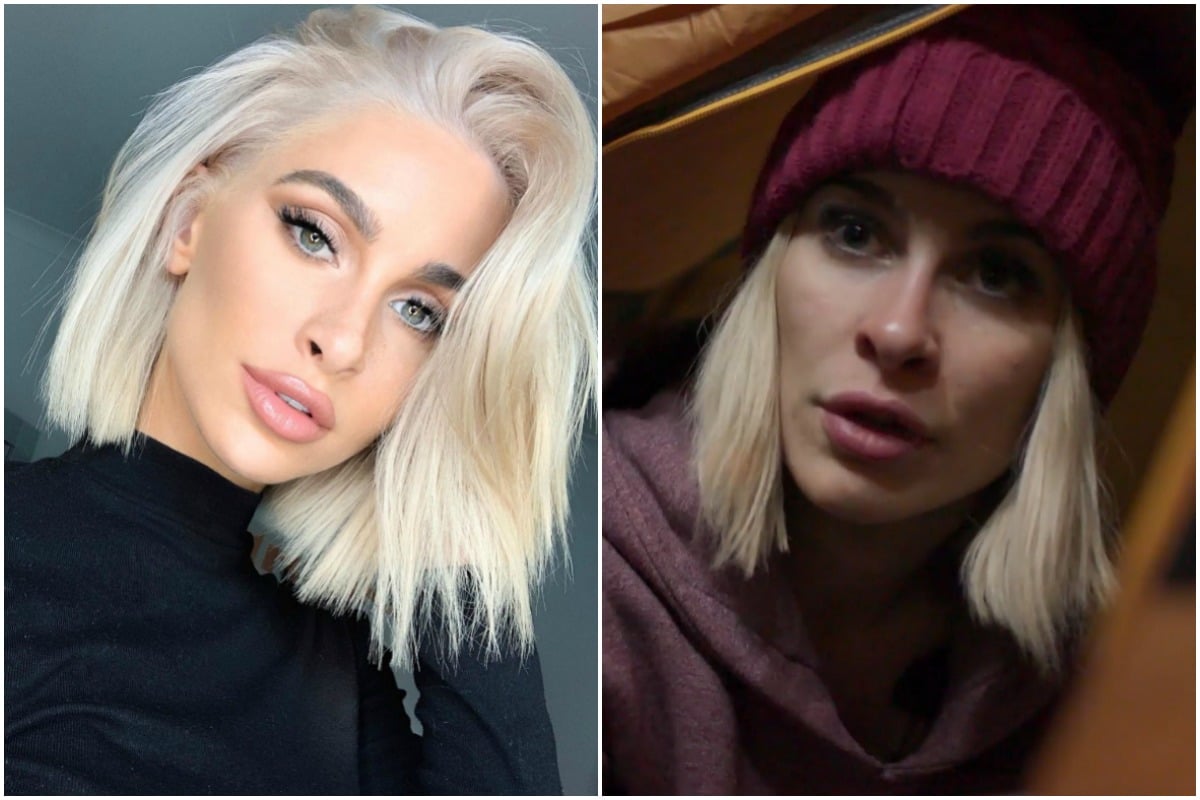 "Even going to sleep at night is the scariest thing. You hear every sound around you and you think, 'Could that be police coming to move me on? I just spent an hour setting this tent up. Am I going to be told to move? Where will I go? What if it's someone coming to rob me?...or worse?'"

For 10 days last year, in the middle of winter, model and actress Ellie Gonsalves experienced what it's like to be one of 116,000 homeless Australians.

"I went in with a really strong mental state, I came out feeling broken," she told Mamamia, ahead of tonight's premiere of Filthy Rich & Homeless on SBS.

WATCH: Ellie gave up her privileged lifestyle for 10 days. Post continues after video.

"This whole experience has made me do a complete 180 on what I thought about homelessness and how I treat homeless people. I went in completely uneducated. As a society, I feel like we view homeless people as dangerous or a problem, and I was always scared to acknowledge or look at homeless people because I have always been conditioned as a woman to avoid dangerous situations and people."

Ellie, 29, was stripped of her belongings and dropped off in Wollongong, south of Sydney, with some second hand clothes and a sleeping bag, a far cry from the luxurious, travel-filled life she shares on Instagram.

Just touched down in @VEGAS ready for a long weekend of fun adventure! One of my favourite places to be and I have some good recommendations for your next visit 🛩📍 #NonStopVegas

Ellie is used to splitting her time between LA and Brisbane, taking her dog Daisy to doggy day spas, and living - by her own admission - a "very, very comfortable life".

Night one of the experiment saw her trying to set up a tent in the rain (which she'd been lucky enough to get from a local charity store), while on her period and with no access to sanitary items - a grim reality for women on the street who make up 40 per cent of our homeless population.

"My body went into survival mode. My period actually disappeared... I had it for a day and it just disappeared, and the doctor told me that's my body shutting down the things it knows it doesn't need when it's under trauma or stress. That was a shock for me...that my body could do that within one day," Ellie told Mamamia. 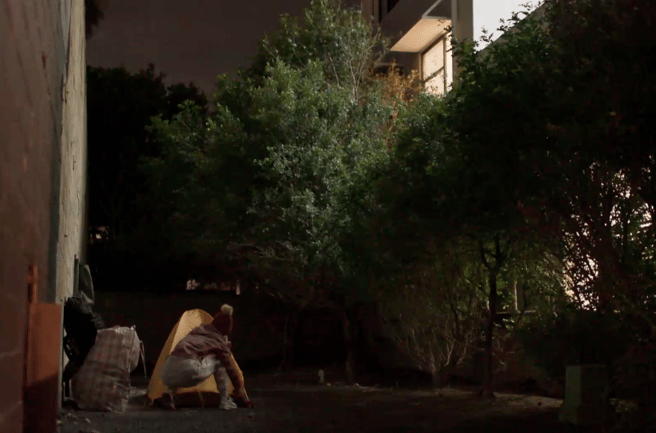 Ellie setting up a tent she managed to acquire while living on the streets.

But the bruises she got from sleeping on the ground, and the terror that came with finding a safe place to rest her head at night, were nothing compared to the experience the Queenslander had in a boarding house in Sydney's inner west. She stayed there overnight with nine men, some of whom she was told had just been released from prison or who suffered from severe mental health issues.

Most homeless Australians don't actually live on the street. They reside in social housing options, many of which, as Ellie soon discovered, are inhabitable.

“The entire house was like a dumpster, my room was freezing, filthy, and I was bitten by cockroaches in my sleep. The toilet didn't close or lock and in the shower all the windows were smashed out. Some of the men were constantly drunk and up until 5am fighting with each other, and I did not sleep once. It was so horrific and I felt so unsafe," she explained. 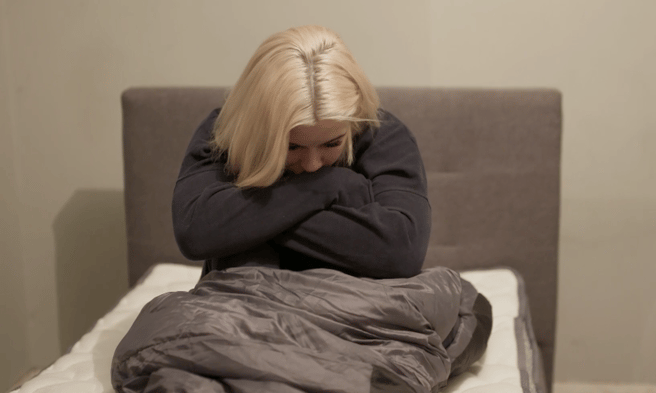 "It was such a pivotal moment in my experience because that's reality for a lot of women [living in places like that], especially women coming out of domestic or sexually violent situations. It's literally impossible to life in. I can't see how people are legally allowed to take rent from you and put you in this housing."

Ellie was supposed to spend three days at the boarding house, but ended up leaving in tears to once again sleep in a nearby park after reaching breaking point.

"I don't want to be here, I just want to go home," she tearily told the SBS camera crew.

"I never thought this was a problem in our country, and I always thought we had such great systems in place...I still remember saying to someone 'Australia's so great, it's literally impossible to be homeless in this country'," she told Mamamia.

"I was so, so wrong. I felt like I came out of this with so much more empathy and understanding towards these situations and these people and really inspired to do my part and shine a light on these problems that we have in country."

Even when she did go back to her 'normal life' it was hard to readjust, which made Ellie realise that it's not just as simple as 'giving people housing'.

"I couldn't sleep through the night, I'd wake up to every sound. Even just going to the gym - I felt so overwhelmed by people speaking to me and interacting with me, seeing as though I'd just been isolated for 10 days. No one on the crew speaks to you, they were trying to isolate us as much as possible. You feel so alone. To go from someone who spent their life in front of a camera and travelling and around people, to literally being avoided on the street because people see the big bag that I'm carrying...I feel like we live in this world where we think if we ignore the problem it's just not there. But unfortunately we've ignored it for so long it's just gotten worse and worse and worse."

#FilthyRichHomeless premieres 8:30pm TONIGHT on @Sbs_Australia. We had ALL of our personal belongings confiscated, given a pair of second hand clothes, a sleeping bag and were dumped on the streets of a cold and rainy Sydney left to fend for ourselves for 10 days. This was quite possibly the most challenging and overwhelmingly emotional experience I’ve had in my lifetime, but I listened, I learned and I very quickly came to see that my preconceptions of homelessness was so inaccurate I felt embarrassed. I. Was. So. Wrong... about everything!!! This series is about the people who are genuinely sleeping rough, their stories, how inadequate our current solutions are to this issue and how to shine more of a spotlight on homelessness, in the hopes of bringing about positive change. It’s something I hope every Australian gets to see, not only to educate us all on the 116,000 people in Australia that are homeless on any given day, but to share real peoples life stories as a little reminder to for us to be a bit more compassionate, caring and giving towards our fellow human beings. Tune in at 8:30pm over the next 3 nights (9th, 10th & 11th) on @Sbs_Australia for the series that busts open a life threatening problem our society is guilty of remaining silent about...

More than anything, this experience has made Ellie realise what it's like to feel invisible, and that's not something she's going to forget quickly.

She wishes every single one of us could experience what she did, and is particularly unimpressed by the prime minister's recent $688 million injection into the renovation industry.

"We need more social housing. I find that so disappointing... that's not someone looking out for the people who need it most. Our government is going in completely the wrong direction."

Long after the show has finished airing, Ellie plans to keep fighting for Australia's homeless. She says they've got an advocate in her forever now.

"Once I believe in an organisation I will continue to push it for the rest of my life."