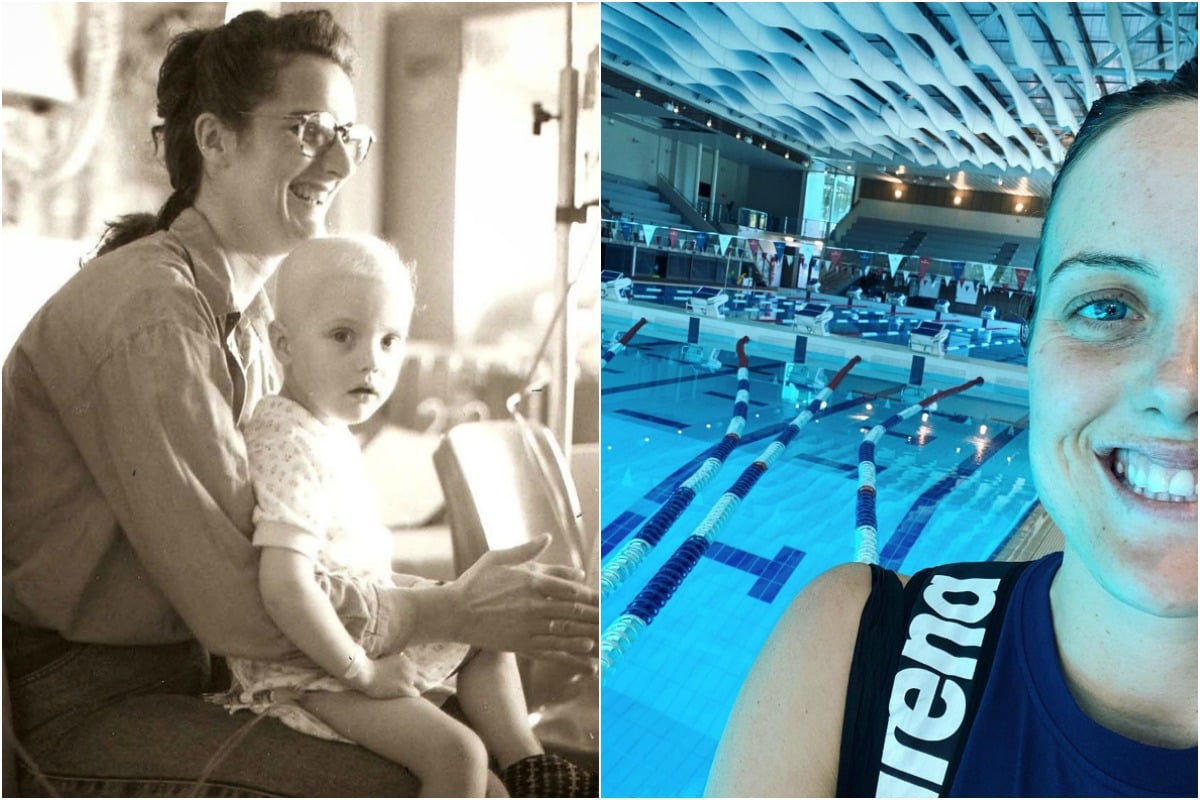 Or losing her leg.

Or the anguish and heartbreak her parents went through, sending their then three-year-old daughter under the knife for life-saving surgery.

She had been diagnosed with a rare tumour - a sarcoma that was wrapped around the nerves of her right leg  - and it hadn't responded to chemotherapy.

Ellie's twin sister Brittany had been by her side through every hospital appointment and every chemotherapy session, and on February 14, 1994, she thought she was going to be wheeled in to get her leg amputated too.

"She wanted to be like me," Ellie, now 28, told Mamamia. "That goes to show the innocence of a young kid."

﻿Ellie's leg was amputated above her right knee, but for her there's "no sense of loss or trauma" because she doesn't have any memories of it.

"Growing up with one leg was very similar to what it would have been like for you growing up with two, I don't know any different," she explained.

"But a lot of people when they see me with my leg, don't understand how uncomfortable it can be. The socket is made out of fibreglass. It's like having a hot fibreglass shell that just rubs on your leg and cuts into your skin," she said.

Ellie thinks of it like wearing an uncomfortable bra.

LISTEN: to Ellie Cole on No Filter. Post continues after podcast.

But despite it being normal to her, others were worried about her limitations.

The surgeon had given her parents a list of things she wouldn't be able to do now that she only had one leg - things like bike riding, roller-blading, and running.

"But I was very lucky to have a twin sister who taught me how to do absolutely everything on that list," said Ellie.

Today is our birthday 🎉 My twin sis, my womb mate, and the one I used to throw under the bus with me when I was in trouble.... Thanks for taking all the blame. Thank you for all the hugs, tears, life lessons, exploring, adventures, laughs and good times. I LOVE YOU! I LOVE YOU! 🥳👩‍❤️‍👩 @mrs_melbs

"I grew up not understanding what having a disability meant. I got sent to school and it was just like 'good luck,' there was nothing about my disability and what I might have to be careful about," she said.

But it was at school where Ellie realised she was different. Suddenly teachers and students were "benching her" for things they assumed she couldn't do.

"They were putting their social anxieties on me," she said. "That was really tough for me."

Ellie had always been obsessed with swimming.

She'd started in the pool eight weeks after her surgery as a way of rehabilitating her body. But it wasn't until she was 11, sitting cross-legged on the floor and channel surfing on the family TV that she stumbled across the 2004 Athens Paralympic Games.

Everything starts with yes. Like saying yes to enrolling in my first swimming lesson. Yes to making my first Paralympic team and my first gold medal. Yes to another session, to never giving up and hard work. Yes to taking a leap of faith, self belief and coming back time and time again. The greatest things in life come from the commitment to say yes. My good friends at @Optus are campaigning for us to say yes to greatness. Share your #Yes story with me below or on your own feed with #StartsWithYes 🦾

"I already loved swimming and I was training at that point, but with able-bodied kids," she told Mamamia. "I didn't even know the Paralympic Games existed. I was shocked."

"I saw people with arms and legs missing - people who looked like me -  doing professional sport. I was in shock. I felt like I had been lied to my whole life."

﻿Back then, the Paralympics wasn't even nearly as celebrated.

But as Ellie explains, "it wasn't just the Paralympics....the disabled community as a whole was ignored a little bit. In the 90s when I was growing up you would never have celebrated a person with a disability, and you would never have thought of them as a professional athlete."

But Ellie was smitten.

She went from having posters of Olympians on her wall, to having Paralympians plastered above her bed, and within four short years she found herself in the athlete's village as a competitor.

"I felt like I could be myself for the first time ever," said Ellie of standing amongst thousands of Paralympians in Beijing in 2008. 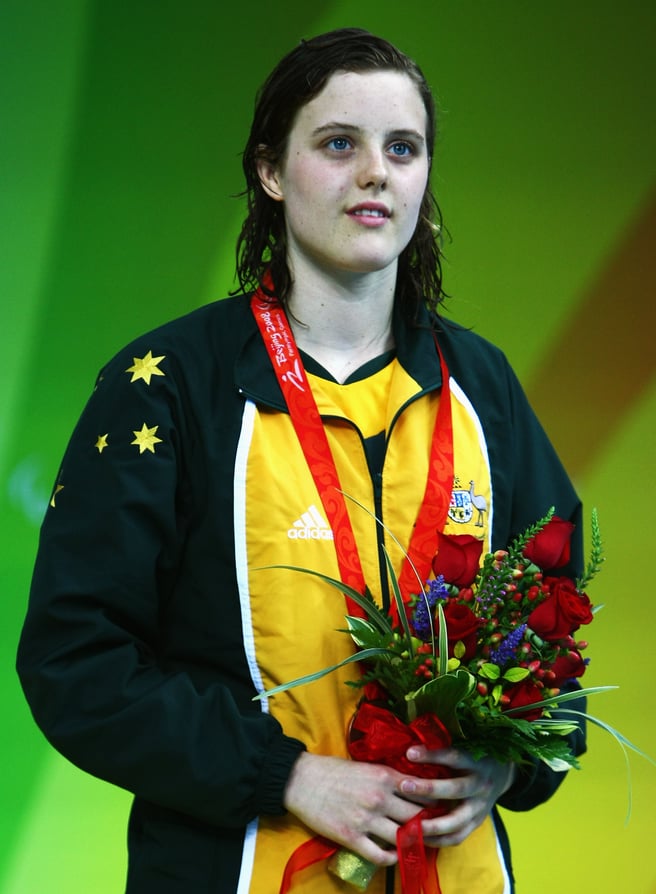 ﻿"It's so nice because it feels like you've found your people. I had so many people underestimate me growing up, and in Beijing, I was surrounded by people who just get it," she said.

﻿"I don't mind people making comments to me, but when they say it over and over again for like 20 years, all of a sudden you walk into a Paralympics and everybody there is looking at you in the eyes, instead of down to your leg. You don't get that anywhere else. It kinda sucks you only get it for two weeks every four years," she told Mamamia.

﻿Ellie has competed at three Paralympics now, and had been training for her fourth - Tokyo 2020 - before coronavirus cancelled it along with every other major sporting event on the international calender.

In fact, she should have been in Japan right now celebrating her retirement from Paralympic sport.

﻿Instead, she's rearranged her training schedule to prepare for a possible Tokyo 2021. 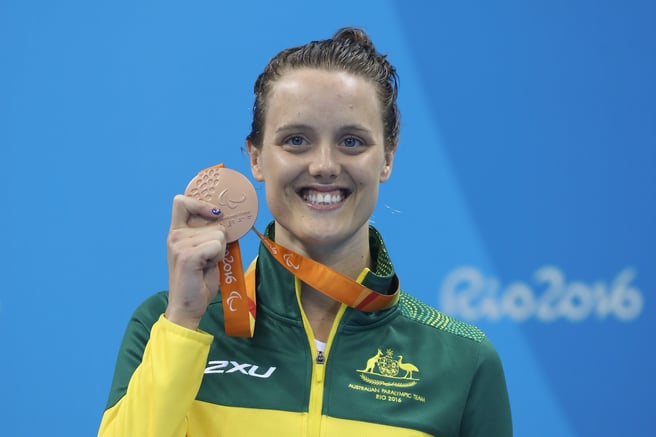 "We've just started the whole process again but it's not motivating to get up and go to training right now because we aren't training for anything this year. Usually you have a world championships in about September, but now we don't have anything. So sometimes we're like what's the point? But Tokyo could be happening and we just have to do it anyway," she told Mamamia.

The Games might not be going ahead this year, but a new Netflix documentary, Rising Phoenix, is making sure Paralympic sport is still front and centre in lieu of Tokyo.

Streaming to 190 countries around the world, Ellie and eight other athletes were interviewed about their lives, triumphs and experiences, with the film exploring the history and hardships of the Games over the years - from Russia refusing to host it in 1980 because they "didn't have any disabled people," to Rio running out of money after spending it all on the Olympics weeks before the Paralympic opening ceremony.

🎥 Were you going to miss the action from this years Tokyo 2020 Paralympic Games? Instead, on the 26th August 'Rising Phoenix' will premiere in over 190 countries worldwide on @netflix. Who’s excited?! 🙋‍♀️ You’ll be inspired to watch the evolution of the @paralympics movement through the eyes of 9 athletes. It’s an unbelievable movie that left me happy and in tears all at the same time! #RisingPhoenix @netflixfilm @htyt.stories

"When we found out they (Rio) had run out of money,  I just rolled my eyes and thought 'here we go'... I am used to being treated like that my whole life," Ellie told Mamamia.

"I was disappointed because we had such a successful London campaign, where it felt like times were really changing. We were progressing, and then we get to a few weeks before Rio and we're told it might not go ahead? It was just a s*itshow."

Thankfully, in the years since, there have been many incredible leaps forward.

At the 2018 Commonwealth Games, Ellie was getting fan mail from kids who were drawing stick figures of people in wheelchairs on a gold medal podium.

"That's so freaking cool because they get it. They can visualise a person with a disability being a champion at the same time. When I was a kid that didn't happen," said Ellie.

Rising Phoenix is another example of that.

"The reactions I have had﻿﻿ on social media... people are blown away, and they are seeing why I love it so much [the Paralympic Games] and why I won't stop talking about it," she said.

HONESTY POST: I have been struggling this week with how uncertain the world is looking. One thing that helps when I am having a poor mental health day is to acknowledge GOOD THINGS. This morning I woke up grateful that I have a coach who sees his athletes as people first 👏 he has gifted us the next week off to take some time for ourselves out of the pool. What’s something (or someone) that you’ve been thankful for this year? I’m also grateful for @twohartdreamers for making me laugh every single day this year and @silvia.emilia26 for being by my side 😘 Stay Positive Everyone!

Of course, there's still a long way to go. Ellie describes the challenges she and other people living with a disability face like "the difference between opportunity for men and women in the workplace."

She knows that if anyone is going to feel the brunt of the COVID-19 financial collapse, it'll be Paralympic sport.

"If they had to pick and choose financially, of course people will pick the Olympics. That's a hard pill to swallow, but it's out of our control," she said.

﻿All Ellie can do right now is train as if she is competing in Tokyo a year from now.

After that's all over? Well. Ellie has plans to open up her very own swim school.

But she has a few more gold medals to win first.

READ: 'Rising Phoenix': Hands down the best documentary we've watched so far in 2020.