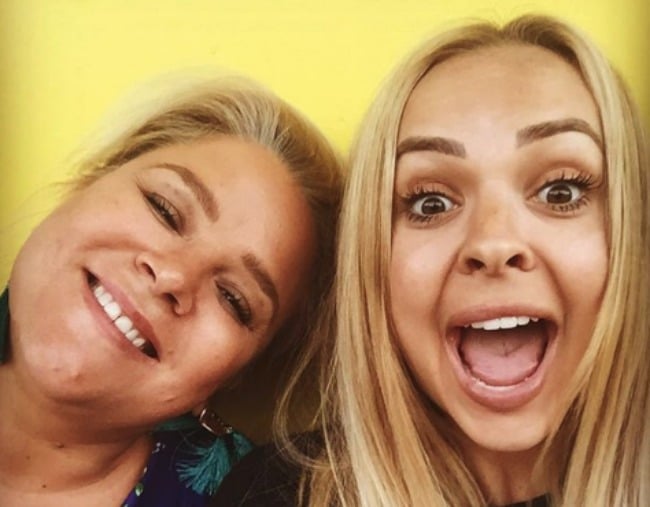 1. Gogglebox star Angie Kent shares the one thing she regrets saying on the popular show.

Speaking to Who magazine’s Binge List podcast, Kent revealed she was unkind to comedian Dave Hughes when she called him “one of the ugliest people she’s ever seen”, during an episode that aired in February.

Kent says it’s something she can’t easily forget, as her words are often repeated to her.

“And that upset me, but I apologise and I know never to use the word “ugly” again,” Kent says on the podcast.

Last season, Angie was watching the show Hughesy, We Have A Problem, when she made the comment, and was forced to apologise publicly.

"I feel terrible about calling Dave Hughes one of the ugliest people I've ever seen, he's funny as feck," she tweeted.

In true Hughesy style, he responded to the comment with comedy on his show.

"I just thought, 'how mean and judgmental can you be, you skanky moll?'", he joked.

This week, Kent offered another apology to the comedian on the podcast.

"Sorry Dave, I eat my words! It's never OK to call someone ugly I'm cross about that, Gogglebox," she said.

2. It looks like Ed Sheeran is already married and has been fooling us all.

Ed Sheeran has confirmed he's already married to Cherry Seaborn in the most Ed Sheeran way possible... by not actually officially announcing anything.

Speaking to Access about his new documentary Songwriter, Ed got a bit, uh, flushed when asked about his wedding plans.

He shrugged, coyly smiled and pointed to a silver ring on his wedding finger.

The Access reporter took that as confirmation that they'd already tied the knot and offered his congratulations, to which Ed initially just nodded and smiled.

"Congratulations! How did you sneak that one? How did you manage that?" the reporter asked.

"I never really do anything too public anyway," Ed responded.

Ed and Cherry began dating in 2015 but have known each other since high school.

3.The Bachelorette star Courtney Dober has broken up with the girlfriend he met filming his second reality TV show.

Is this the friendliest break up ever?

The Bachelorette star Courtney Dober and The Bachelor New Zealand runner-up Lily McManus have mutually broken up but he insists they're still "best friends".

"I've always lived under the motto - 'Everything happens for a reason' and i have no doubt we were meant to meet," he said.

The pair met on the Bachelor Winter Games, an American bachie spin-off (very, very) loosely based around the Olympic Games.

Lily shared a tribute to her now-ex on Instagram, calling him a "bloody good man".

"It makes my eyes leak a little bit but myself and Court have decided to split on mutual terms," she wrote. "I love Court with every ounce of my being, that long limbed f*ck will be a part of my life for a very long time. You guys watched us fall in love and it was honestly just as magical as it looked in real life... I can already feel the “love is dead” comments brewing but I can promise you guys it is 100% alive and well."

4. Taylor Hanson, the musician you loved in high school, is expecting his sixth child and his family photos will make you swoon.

Taylor Hanson, a.k.a our crush forever, is expecting his sixth child with wife Natalie.

"Baby Hanson coming in December and we are over the moon."

The 35-year-old dad-of-five met his wife, a big fan of Hanson, backstage at the trio's concert over two decades ago.

Taylor and I are so thrilled to share the news that baby number six is coming this December! Ezra, Penny, River, Viggo and especially Wilhelmina can’t wait to be big brothers and sisters again! * more pics and family news up at natonthewall.com!

5. We’ve just discovered the most radical thing Kate Middleton did at uni and cheers to that.

In what is seemingly the most radical and un-royal thing we would have expected of the Duchess of Cambridge, we've just learned that back in her university days, she was responsible for founding an all-female drinking society.

And she did it all in the name of feminism.

A newly-surfaced 2007 report from The Guardian writes that Kate Middleton was "annoyed that the old ones excluded women," so she took matters into her own hands and started her own.

The publication also specified that although she partook in the drinking, "no one remembers her getting very drunk," which we as former uni students find very admirable.

Kate, now 36, studied art history at Scotland's University of St Andrews, which is where she would met her future husband, Prince William, in 2001.