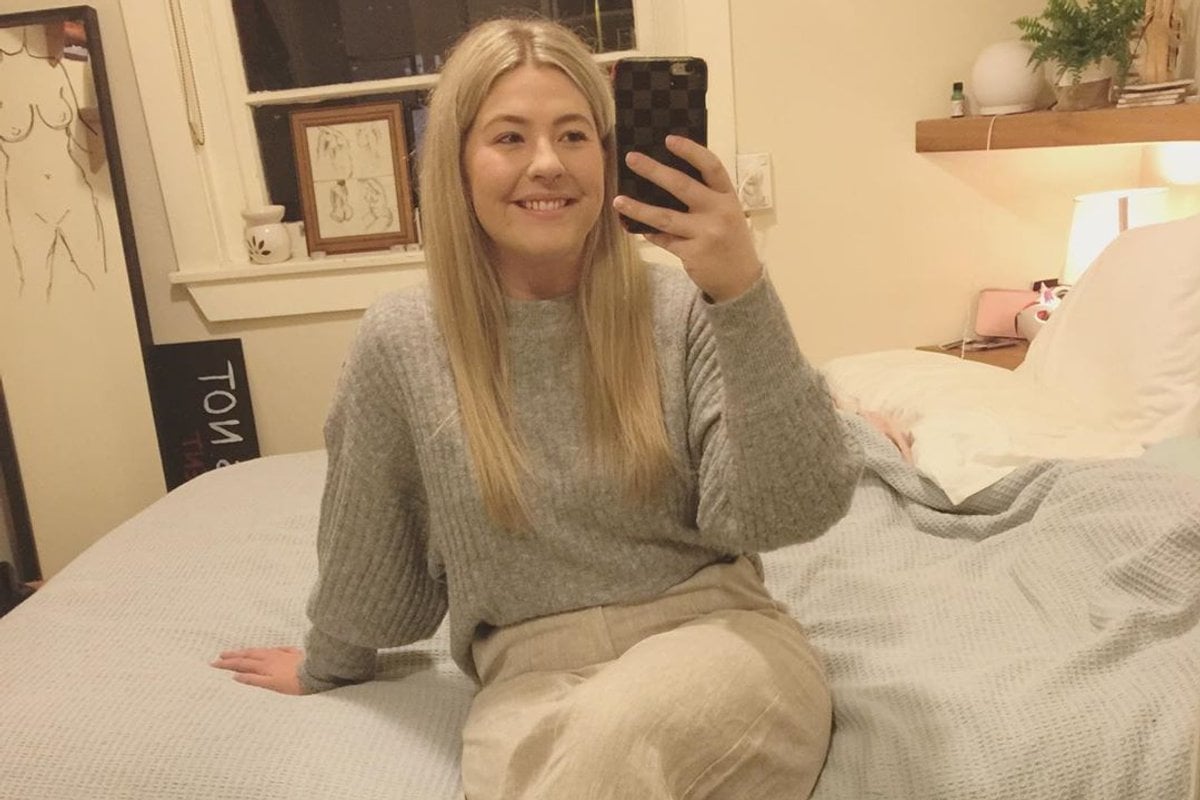 Ebonie Sanderson didn't think much of the polite message she sent off to a man, Tom, who'd she matched with on Tinder.

He'd been persistent throughout the day and insisted Ebonie come over that night. She apologised and politely let him know she was busy studying and was going to be home late.

That's when a flood of messages started on more than one of Ebonie's social media accounts.

Speaking to Mamamia, Ebonie said she pushed back, saying she was no longer comfortable seeing him and was sorry for wasting his time.

"Cya you ugly, fat time wasting w****," came one response, along with a number of voice messages.

When she blocked him, he added her through another account to continue the abuse.

It wasn't confined just to Instagram either: On Snapchat, Tom said "I know you know, deep down, that you are below me. That there's a hierarchy in society... and the dysgenic like you are there to serve us".

⚠️ WARNING: CYBER BULLYING, HARASSMENT, SEXISM, FATPHOBIA AND MISOGYNISTIC BEHAVIOUR ALERT!!! ***UPDATE: 1. An email from Tom’s CEO has been received confirming that he has been fired, effective immediately. The CEO did the right thing and acted quickly, so I kindly ask you to stop emailing them. 2. Unfortunately, more women have come forward that have experienced similar encounters of abuse and harassment from Tom. My dm’s are a safe place if this is also you. This is what happens when you say NO or call out a man for being disrespectful!!! You apparently earn yourself the right to get verbally abused and fat shamed on more than one platform. No I didn’t “ask for it” and yes, I’m entitled to change my mind and tell someone I’m not interested anymore because I feel uncomfortable and intimidated by ones aggressive and forceful nature. The worst part about this attack, is the fact that I felt the need to be nice when turning him down, telling him he’s good looking and will find someone else for the night and then apologising for feeling uncomfortable!!!! THAT IS A BIG PROBLEM If anyone comes across this man on dating apps or social media, please report him. I managed to video call and he answered and appeared to in fact be this very man in the picture... “Tom”. All I can say is what a privileged misogynistic PIG. I will never change my weight for anyone else but MYSELF!!!

"That night I was really upset and really offended," Ebonie told Mamamia.

"Everything he said was really hurtful.

"But the more I thought about it, it wasn't normal behaviour. It was very irrational, it was very aggressive; it was very sexist, it was very misogynistic. I was like, 'This is disgusting, I can't take anything this pathetic personally'."

After thinking it over, Ebonie decided to share the messages on her Instagram - publicly calling out the man who thought it necessary to harass her because she said she wasn't keen to meet up.

"This is what happens when you say NO or call out a man for being disrespectful," she captioned her post.

"You apparently earn yourself the right to get verbally abused and fat shamed on more than one platform.

"No I didn’t 'ask for it' and yes, I'm entitled to change my mind and tell someone I'm not interested anymore because I feel uncomfortable and intimidated by ones aggressive and forceful nature."

Others shared the post on social media, including Clementine Ford, quickly amassing thousands of likes and comments.

"I've had an outrageous amount of ladies send me a message," Ebonie told Mamamia of the response.

"It's crazy to think how many I've gotten. They're not just here in Sydney; there's been a few ladies overseas, there have been some interstate... It really has been crazy. It's like a sign [the post] has spread for a reason."

Another woman, brewery supervisor Erin Hinds, came forward with a similar story about Tom to the Daily Mail.

Ebonie said as soon as she realised the man had a second, back-up Instagram account to message her from after she blocked his main account, she suspected this was not a one-off.

Another woman, who is known to Mamamia but has chosen to remain anonymous, said she had matched with Tom multiple times across many different dating apps and felt ill when she saw Ebonie's post over the weekend.

"He would usually open the conversation with something sexual, unfortunately that's not unheard of on dating apps, but it was always clear he was looking for a sexual partner for that evening," she explained.

She said she felt disappointed: "This is exactly what men do when they get turned down. Like they call you ugly, fat and worthless when minutes before they were trying to get in your pants."

Over the weekend, Tom's employer confirmed his behaviour had breached their contract. His employment was terminated effective immediately.

Ebonie said she hoped her post helped other women feel safe to share or report their experiences.

"I think every experience like this is serious, [women] just don't know if they'll be taken seriously," she said.

"I'm amazed at how many people haven't told anyone, or they were embarrassed or scared... I just think if women are feeling unsafe or are feeling like this, talk to someone or go and report it, get some advice.

"That's where it all starts. If we don't do that, they're never going to pay for what they've done."

Reply
Upvote
Its disgusting what he did but if I was his employer I'd be very worried he has very strong case for unfair dismissal.
C
cat 2 years ago

Reply
Upvote
5 upvotes
@z99 most contracts have a clause for behaviour that brings the company into disrepute, even specific to social media.
K
keogh.bianca.b 2 years ago

Reply
Upvote
This happens all the time. I have screenshots of many conversations of men who turn nasty.
I have been called worse things then what she was called.
J
jacc84 2 years ago

Reply
Upvote
1 upvotes
@keogh.bianca.b
It doesn’t make her experience any less, though.
L
laura__palmer 2 years ago

Reply
Upvote
1 upvotes
@keogh.bianca.b Yep, it's been normalised. Men like these think they can get away with it because women just put up with it and don't feel like they can speak out. But it's great women are speaking out and we should support them, these men deserve to be called out and deserve consequences for this disgusting behaviour.
C
cat 2 years ago