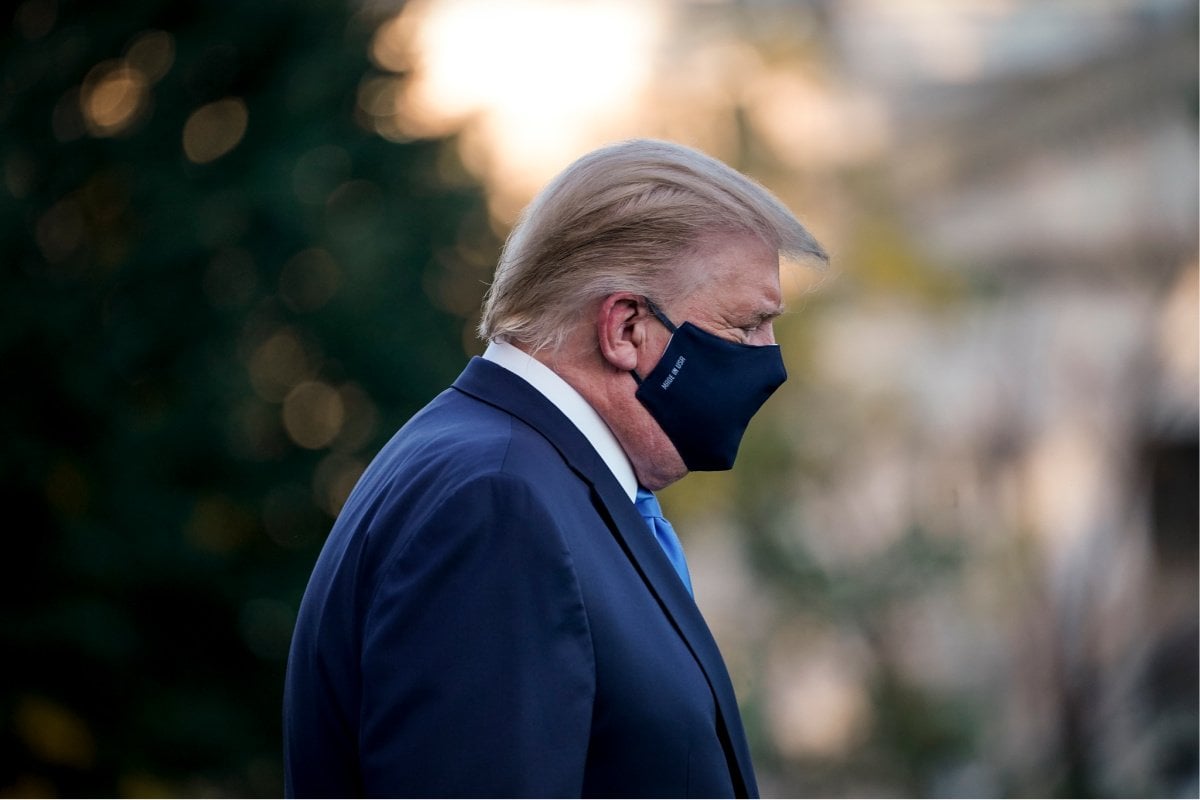 Just four weeks away from the US election, President Donald Trump and his wife, Melania, have tested positive for COVID-19.

Confirming their diagnoses on Friday via Twitter, the President wrote, "We will begin our quarantine and recovery process immediately. We will get through this together."

Tonight, @FLOTUS and I tested positive for COVID-19. We will begin our quarantine and recovery process immediately. We will get through this TOGETHER!

After receiving an experimental antibody drug combination that is still undergoing clinical trials, the president was flown to Walter Reed Hospital this morning where he will spend a "few days" on the advice of his doctors. The White House said the admission was precautionary.

"I want to thank everybody for the tremendous support. I'm going to Walter Reed Hospital," President Trump said during an 18-second video uploaded to Twitter.

"I think I'm doing very well but we're going to make sure that things work out. The First Lady is doing very well. So thank you very much, I appreciate it. I will never forget it. Thank you."

The White House initially said that the president was exhibiting mild symptoms. But at 74 years old, he is at increased risk of serious complications from the virus, which has now killed more than 209,000 people in the United States.

So, if his symptoms were to worsen, what does that mean for the upcoming presidential election?

How does Trump's diagnosis affect his campaign?

Like Australia, American COVID-19 restrictions require individuals who contract the virus to self isolate for two weeks.

With only four weeks left of his re-election campaign, this diagnosis places a huge spanner in the works.

"Trump’s main advantages, including incumbency, have been removed. Rallies, his main vehicle for mobilising his base, will no longer be possible. Fly-bys with Air Force One as a backdrop are gone," Republican strategist Rick Tyler told AP News.

Donald Trump was expected to appear at various rallies and events across the country over the next two weeks. They have all been cancelled or postponed.

What happens if Trump becomes incapacitated?

Four years after the assassination of John F. Kennedy in 1963, lawmakers introduced Section 3 of the 25th Amendment to the US Constitution. This outlines that the president can temporarily transfer his powers over to the vice president while remaining in office.

So, if Trump were to become incapacitated and unable to fulfil his duties as president, he could ask Vice President Mike Pence, who has tested negative to the virus, to take over as acting president. 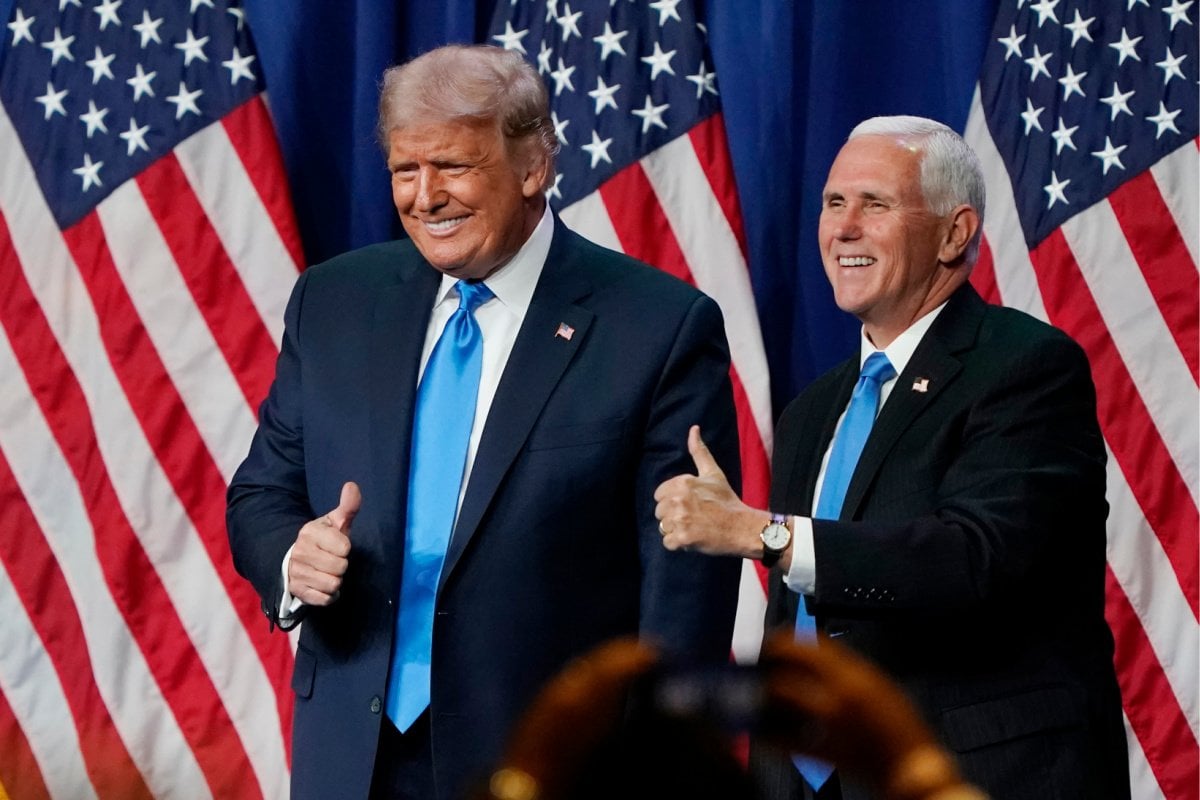 Most recently, this happened in 2002 and 2007, when George W. Bush underwent surgery and Vice President Dick Cheney became acting president until he fully recovered.

Could the presidential election be delayed?

Although the election can technically be delayed by an act of Congress, it has never happened before. Elections have gone ahead during the worst economic depressions and the Civil War, so it would be assumed that this one will proceed too.

Under the fixed US law, voters must go to the polls on the Tuesday after the first Monday of November, every four years. This year, it falls on 3 November.

However, as this event directly affects one of the presidential candidates, there isn't an exact answer whether or not it will go ahead.

If Trump's condition were to worsen and there was a push for the election date to change, it would have to be legalised by Congress, signed by Trump, and both the Senate and the House of Representatives would have to agree to pass a federal law that could postpone the date.

But since the Democrats control the House of Representatives, this situation is highly unlikely.

What happens if Trump has to come off the ballot?

If Trump has to come off the ballot as the Republican presidential nominee, the 168-member Republican National Committee (RNC) would have the formal power to choose a replacement nominee.

The Republican National Committee is made up of state-elected members, current and former party officials and representatives from state, local, or national party committees. At the nominating convention, the committee would simply need a majority vote to choose a replacement nominee.

While it would be assumed that Vice President Mike Pence would be the automatic choice, that isn't the case.

Although the 25th Amendment allows Vice President Mike Pence to serve as acting president if Trump were to become incapacitated, the RNC is a party and separate from the US Constitution; and therefore, they abide by their own set of rules.

But the biggest problem with choosing a new nominee isn't considering who would be the replacement, it's dealing with how close this decision would be to Election Day.

As we're a month out from Election Day, all states have started the process of early voting. According to the 2020 Early Voting Statistics, 2.9 million Americans have already cast their vote.

"Especially if this would occur in two-three weeks, the states are not going to be able to reprint their ballots," Pildes told Vox.

"In most of the country, those votes are now locked in and cannot be changed. This is one of the liabilities of voting early; it has a lot of upsides, but it causes a lot of voters to commit to a choice," Election law expert Barry Burden also told the publication.

If Joe Biden were to fall ill with coronavirus (despite testing negative) as well, the Democratic National Committee would go through the same process to find a Democrat replacement nominee.

As we've learnt this year, this virus comes with a lot of uncertainty. So while these are the answers we have right now, they will potentially change in the coming weeks and months.