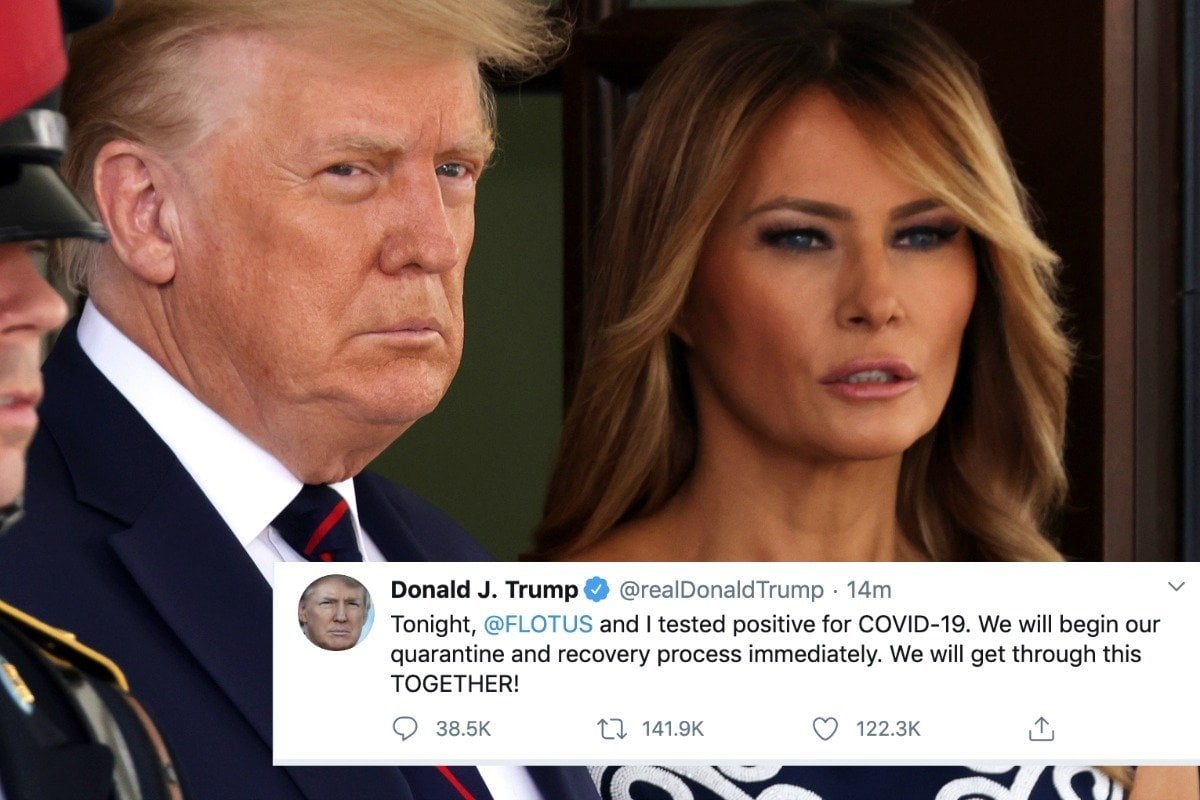 U.S. President Donald Trump and his wife, Melania, have tested positive for COVID-19.

President Trump announced their diagnoses via Twitter on Friday, writing, "We will begin our quarantine and recovery process immediately. We will get through this together."

Trump is 74 years old, putting him at higher risk of serious complications from a virus that has now killed more than 200,000 people in the United States.

Tonight, @FLOTUS and I tested positive for COVID-19. We will begin our quarantine and recovery process immediately. We will get through this TOGETHER!

The diagnosis marks a major blow for a president who has been trying desperately to convince the American public that the worst of the pandemic is behind them even as cases continue to rise with less than four months before Election Day. And it stands as the most serious known public health scare encountered by any sitting American president in recent history.

Yet Trump had consistently played down concerns about being personally vulnerable to contracting COVID-19, even after White House staff and allies were exposed and sickened.

"I felt no vulnerability whatsoever," he told reporters back in May.

He has instead encouraged governors to reopen their states and tried to focus the nation's attention on efforts to revive the economy — not a growing death toll — as he seeks another four-year term.

The president has been reluctant to practise his own administration's social distancing guidelines for fear of looking weak. He continued to shake hands with visitors long after public health officials were warning against it and has refused under almost all circumstances to wear a mask in public.

President Donald Trump has shared a video message to his personal Twitter account from hospital. This is the first time that he has spoken on camera to the world since the diagnosis, and he made a point to thank the medical staff appointed to him and Melania for taking good care of them.

“I came here, wasn’t feeling so well. I feel much better now. We’re working hard to get me all the way back,” Trump explained in the four minute long video.

Many have asked questions around what Trump's diagnosis means for his presidential campaign, so Trump was quick to address this by saying, “I’ll be back, I think I’ll be back soon. And I look forward to finishing up the campaign the way it was started”.

Although Trump's camp have worked hard to project an image of a president largely unaffected by the coronavirus, the president did acknowledge in his video that the next few days would be critical for him.

“You don’t know over the next period of a few days, I guess that’s the real test,” he said. “So we’ll be seeing what happens over those next couple of days.”

Reply
Upvote
2 upvotes
Narcissists will do anything to win, anything. We know Trump's niece stated he lied to get into college. We know he lies to win at golf. When lies won't work he bullies. He will not be able to bear the idea that he might not win the election. Narcissists simply cannot cope with losing.
I'll believe he has COVID when I see a published copy of his doctor's report.
Since the Republicans only waited an hour after Ruth Bader Ginsburg's death to announce they'd be replacing her, I feel no compulsion to express pretend sympathy for him if he has COVID.
F
feast 2 years ago

Reply
Upvote
1 upvotes
My first reaction was a chuckle, I know not very nice of me but thinking it through I'm realising there is no good in this situation.
Some of the scenario's :
A) Trump only develops mild symptoms and recovers quickly
- People use this to justify that Covid -19 isn't that bad and no worse then the flu making it even harder for the US to get it under control.
B) Trump develops severe symptoms requiring medical care.
- His supporters demand a delay in the election and riot if it doesn't happen. If the election does go ahead they will declare the result invalid and again, riot.
C) Trump dies as a result.
- His supports will treat him like a martyr. General riots out of principal. Demands to delay the election and hold China accountable.
There are no likely winners out of this.
C
cat 2 years ago

Reply
Upvote
@feast I think it’s playing out pretty well actually. Trump has a severe case but receives elite medical treatments that no one else can access. Actively endangers other people’s lives to feed his own ego. No need to feel sorry for him because he’s not in danger, but shows that the virus is very dangerous to the regular person. All as he tries to take healthcare away from everyone. I don’t know if it will change the election but it’s not helping the Republicans.
News
General
Opinion
True Crime
Politics
Sport
Explainer
Entertainment
Celebrity
Reality TV
Movies
TV
Books
Rogue
Royal
Lifestyle
Beauty
Fashion
Weddings
Home
Wellness
Health
Fitness
Travel
Food
Parents
Before The Bump
Pregnancy
Baby
Kids
Teens
School
Parent Opinion
Work & Money
Money
Finance
Career
Lady Startup
Relationships
Sex
Dating
Separation
Friendship
Family
Real Life
Couples