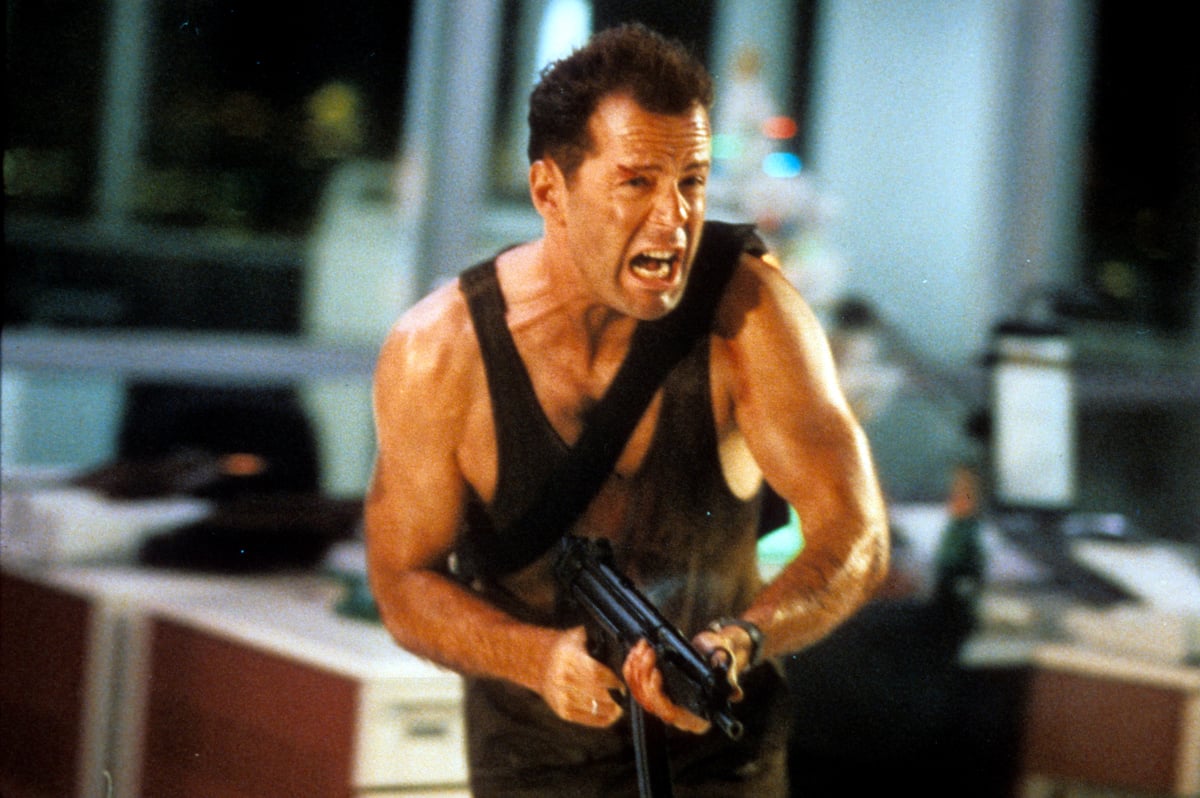 In March 2022, Bruce Willis' family announced the actor would be "stepping away" from his acting career following a recent health diagnosis.

"To Bruce’s amazing supporters, as a family we wanted to share that our beloved Bruce has been experiencing some health issues and has recently been diagnosed with aphasia, which is impacting his cognitive abilities," the statement read.

"As a result of this and with much consideration Bruce is stepping away from the career that has meant so much to him."

Willis' most memorable role was playing New York City detective John McClane in the Die Hard franchise. The first film was a major box-office success and is now considered a cult action and Christmas film.

Whether you've watched it once or every December, there's a good chance you don't know many of the behind-the-scenes facts about the 1988 film.

Here are 10 things you probably didn't know about Die Hard.

In an interview with Oprah in 1988, Willis told the talk show host that he did a lot of his own stunts in the action film.

"This part was a lot harder than just about anything I’ve done for a lot of reasons," Willis said.

"If you saw the film, they really kind of beat me up in this thing. It’s a very physical part. I did a lot of my own stunts in it."

One of the stunts caused him permanent hearing loss.

"Due to an accident on the first Die Hard, I suffer two-thirds partial hearing loss in my left ear and have a tendency to say, 'Whaaa?'" he told The Guardian in 2007.

While filming the movie, Willis was married to Demi Moore. One day when she went to visit him on set, the actor "nearly died".

"I went to see him on set which turned out to be terrifying," she wrote in the book.

"He nearly died jumping off a five-story garage, just making it onto the airbag below when he was blown off course by a scripted explosion. He laughed about it. I didn’t."

During the film, a lot of glass gets destroyed - by shooting it, jumping through it, pulling it out of feet. So, it only makes sense they spent a lot of money on the material during filming. 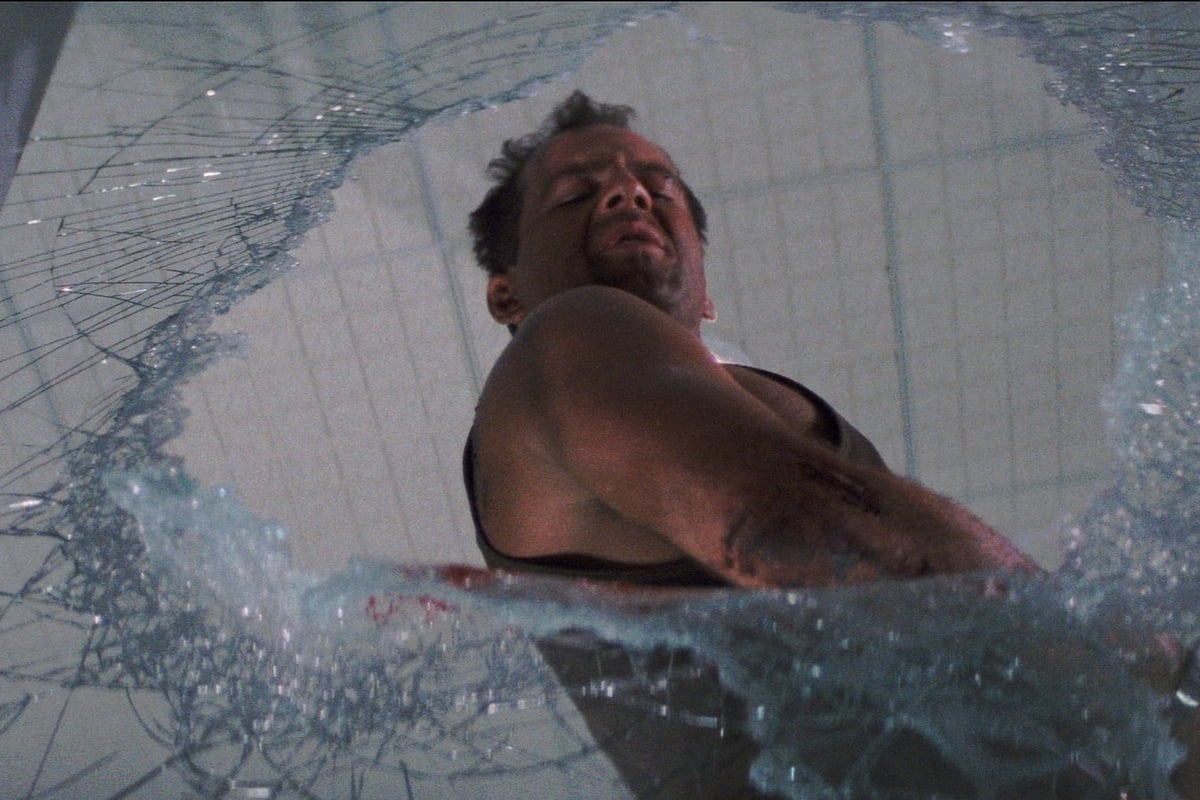 4. The Nakatomi Plaza building is real. Sort of.

The building that serves as Nakatomi Plaza in the film is actually Fox Plaza, the corporate headquarters of 20th Century Fox (the company that distributed the film) in Century City, Los Angeles.

The building was under construction during film, so the unoccupied 33rd and 34th floors served as a set.

But while Die Hard was a Fox project, the company still charged them a location rental fee for using the space.

The role was originally meant for Frank Sinatra.

Based on the Roderick Thorp novel Nothing Lasts Forever, Die Hard is in fact a sequel to Thorp's earlier novel, The Detective, which was turned into a film starring Frank Sinatra as private detective Joe Leland in 1968.

20th Century Fox was contractually obligated to offer the role of what would become John McClane to Sinatra, however, as he was in his early 70s, he declined.

And while Willis eventually got the part, he was the fifth choice.

As he was still a relatively unknown actor in 1987, having only starred in the television series, Moonlighting, the role was first offered to Arnold Schwarzenegger, Burt Reynolds, Sylvester Stallone, Harrison Ford and Richard Gere.

Once he secured the role of John McClane, Bruce Willis was paid an eye-watering $5 million for his performance.

That amount caused quite the stir in Hollywood as little to no A-list actors was paid that much for one film (let alone a newcomer) and it had to be personally approved by Fox President Rupert Murdoch.

Not bad for a fifth choice.

6. Alan Rickman didn't think of Hans Gruber as a villain.

Despite still being considered one of the best villains in an action film, Alan Rickman didn't think of Hans Gruber as one.

"I'm not playing the villain," the late actor said during promotion for the movie.

"I'm just playing somebody who wants certain things in life, has made certain choices, and goes after them."

Hans Gruber was slick with his perfectly done hair and polished suit. And it was Alan Rickman who helped come up with that look. 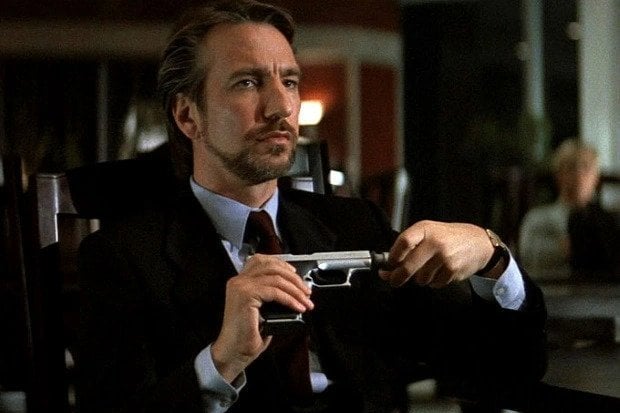 "I was just thinking: If I was wearing a suit and not all of this terrorist gear, then maybe there could be a scene where I put on an American accent, and he thinks I'm one of the hostages," he also said during the film's promotion.

Rickman was so sure this would be a good idea, he left a note making the suggestion on producer Joel Silver's desk. That didn't go so well.

"Then I went back to England, and I kind of got the Joel Silver: 'Get the hell out of here, you'll wear what you're told,' and I said, 'Okay, fine.' And then I came back and they handed me the new script.

"So, you know, it just pays to occasionally use a little bit of theatre training when you're doing a movie."

Despite being known and loved for his role in this action film and the Harry Potter franchise, Die Hard was Alan Rickman's first feature film.

And during filming, he hated the gunfire.

Director John McTiernan had to cut away from his face every time his character fires a gun, and if you look closely, you can see him wincing when Hans shoots Takagi.

This one might come as a shock if you've seen the movie plenty of times and always assumed the terrorists were speaking German.

While it might've sounded like that, none of the actors spoke the language; so, in the theatrical release they spoke German-sounding gibberish, and in the home video release it was replaced with real German.

But if you look carefully, their lips are off.