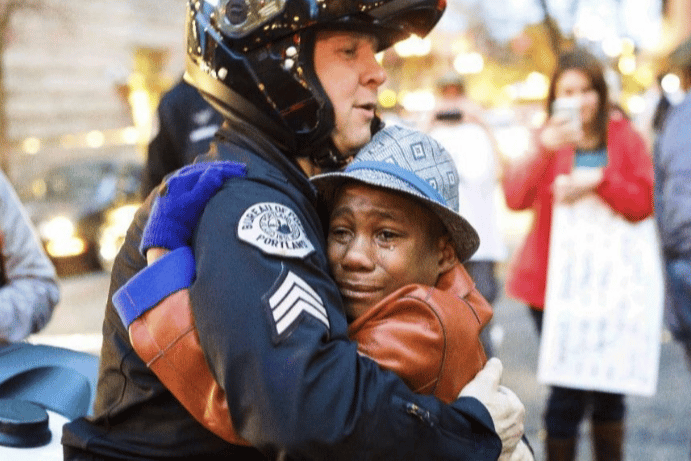 In photos, Devonte Hart often sported a smile as wide as his face. But when he wore a ‘Free Hugs’ sign and got a hug from a police officer in Ferguson, Missouri, in 2014, his face was a flood of tears.

The then-12-year-old’s adoptive mother, Jennifer Hart, 38, posted a photo of the hug on her social media, with the comment: “He trembled holding a Free Hugs sign as he bravely stood alone in front of the police barricade.” 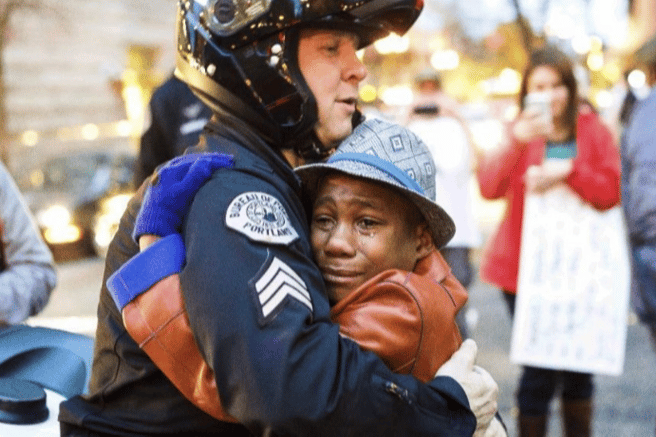 The viral photo of Devonte Hart and a police officer in 2014. Image: Facebook.

The photo went viral around the world as a symbol of hope and unity between the black community of Ferguson (protesting the fatal shooting of Michael Brown), and police. Quickly becoming known as ‘the hug seen around the world’, it’s currently experiencing a resurgence in online sharing because of the recent George Floyd and #BlackLivesMatter protests.

But Devonte’s tears were misinterpreted by everyone. He, and his five other adopted siblings (two of them biological), were being starved and physically abused by Jennifer and their other adoptive mother, Sarah Hart.

The world didn’t know at the time that years earlier in Minnesota, in 2011, after several complaints were made to Child Protective Services (CPS), Sarah, 38, was arrested for withholding food and physical abuse of the children, and sentenced to probation.

CPS reported that the children claimed Jennifer – who by this stage was home-schooling them - disciplined her family by starvation. But when the adults were investigated, Sarah, who worked full time out of the house, took responsibility.

It would transpire to not be an isolated incident, but rather, a pattern of abuse.

The Harts fled Minnesota to Oregon, where two years later, Oregon CPS opened an investigation into their parenting. Finally, in 2017, after fleeing again, the Harts moved to Woodland, Washington.

At each new location, teachers and neighbours noticed signs of abuse, and the unusually small size of the children, which indicated their basic nourishment needs were not being met. Each time, investigations were made.

It took years, but finally, the state CPS departments began piecing together the case against the Harts, who had managed to be just convincing enough to secure their freedom to continue to be mothers to their adopted children.

Some who’ve investigated the case have suggested that this was the ultimate situation of white privilege; the vulnerable children’s concerns were smoothly dismissed by the mothers, who, because of their wholesome public images, were believed instead.

Others have suspected the children were used by the couple to cultivate a social media following, as Jennifer prolifically posted happy, shiny images of the family.

It’s also been noted that the Harts had received USD $277,000 in public money to support the adoptions.

Whatever the Harts’ motivation, no one suspected the tragedy that was coming.

By August 2017, despite yet another attempt at a fresh start, the net began closing on the Harts. The DeKalb family, who were immediate neighbours, found Devonte (15 by this time) begging for food, on numerous occasions.

One night Hannah escaped her home and pleaded with the DeKalbs to hide her, claiming her mothers were racist and whipped the children with belts.

As usual, Jennifer and Sarah were able to convince everyone that the children were exaggerating, and were perfectly safe.

The DeKalbs’ misgivings were momentarily calmed. But a starving Devonte continued to visit for food – nine times alone between March 15-23, 2018. He was asking for “non-perishables” that didn’t need to be stored, for six children.

And then, terrified, he added, “Don’t tell mum”.

Over the next week, Devonte also disclosed that Sarah, who used to dislike the physical punishments, was now tolerant of them.

“Everything Hannah told you was true,” Devonte bravely shared.

It was clear to Mrs DeKalb that the plight of the children had become extremely dangerous. She notified CPS, and her father called the police.

“There are some kids that I believe are being highly abused,” he told the 911 dispatcher.

“I can’t live with it. I’m very concerned for these kids. I just can’t let this go any longer.”

Under the increasing pressure and third-party scrutiny, on the morning of March 24, 2018, the Harts did what they always do: they fled. Jennifer sent cryptic messages to a friend, one which read “FML” – meaning “f**k my life”, a phrase used by people when they’re frustrated. Sarah also sent a strange message to a friend about needing to miss work.

The police were able to ascertain that the family were driving towards California, but despite desperate attempts to catch up with them, they were too late.

On March 26, Jennifer drove their SUV with the entire family off a cliff on Northern California’s Pacific Coast Highway.

It was later found she was inebriated, and that everyone else had high levels of a sedating drug in their system.

The car left no skid or brake marks, and the throttle had been at 100 per cent. No one in the SUV had been wearing a seatbelt.

Jennifer’s last internet search history from her phone was haunting:

“Is death by drowning relatively painless?”

“How long does it take to die from hypothermia in water while drowning in a car?”

“What will happen when overdosing with Benadryl [sedating cough medicine]?”

Devonte’s and Hannah’s bodies were never recovered, but they are presumed dead.

Markis, 19, Jeremiah, 14, Abigail, 14, and Ciera, 12, were all discovered in the ocean. Each one’s death certificate lists homicide as the cause of death. Jennifer’s and Sarah’s states death by suicide.

The tragic truth behind the viral photo of Devonte is examined in Thread of Deceit: The Hart Family Tragedy, that was released on Amazon in April this year.

The show speaks to everyone from the police, to Devonte’s stepbrother and Mrs DeKalb, and also the Hart’s personal friends – who have been vilified for defending the couple’s actions.

It also examines how the case was used by some Black Lives Matter groups to demonstrate systematic failures.

But ultimately, the end was one which can be only simply explained.

“The children didn’t stand a chance,” Shonda Jones, a family law solicitor who has followed the case, told the documentary. “Because both parents had their issues.”

Tragically, and ironically, that also possibly meant the last genuine affection Devonte ever received was from the police officer in Ferguson.

Reply
Upvote
Horrific.
I always wonder how couples with capacity for this level of evil manage to find one and other.
C
cat 2 years ago