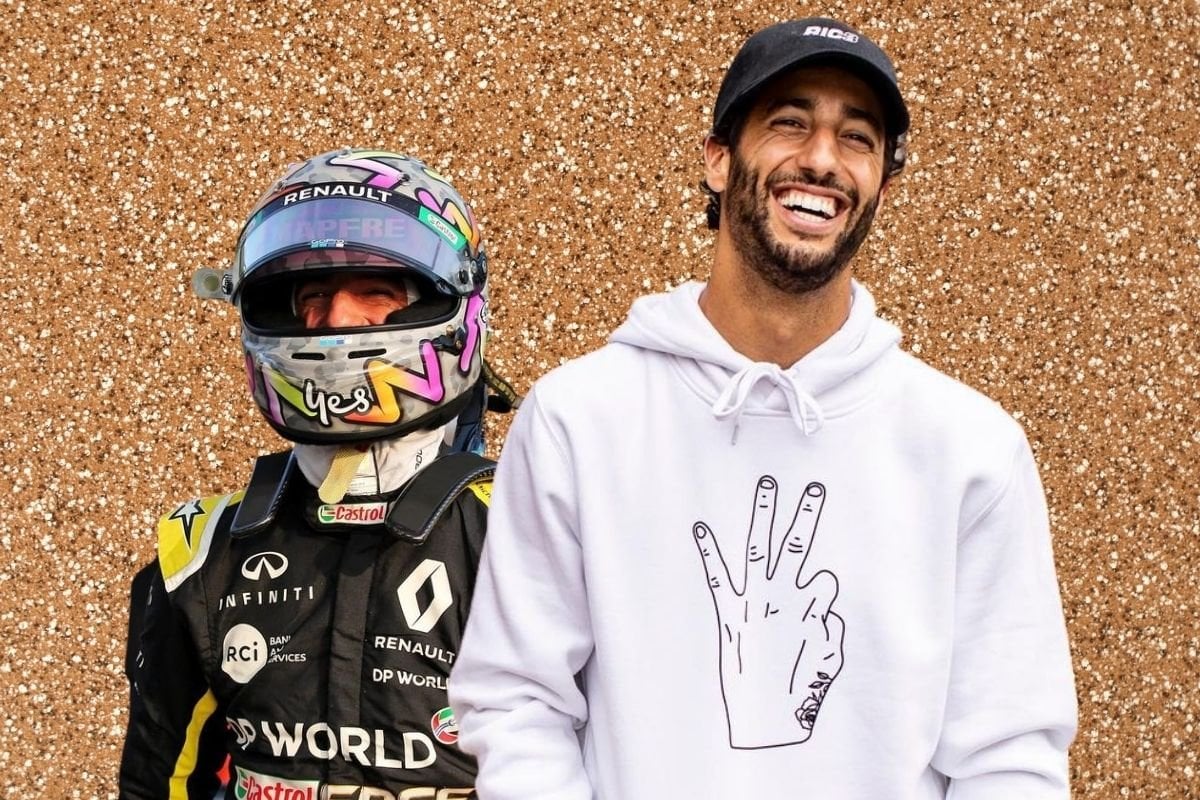 In the world of motor racing, the nickname 'The Honey Badger' has nothing to do with a curly haired bloke off an Australian reality TV show.

It belongs to champion Australian Formula One driver Daniel Ricciardo, and it was given to him by his trainer long before he was winning races at a pro level.

Apparently the honey badger is one of the most fearless animals in the animal kingdom - notorious for its strength, ferocity and toughness.

"I remember he [my trainer] flicked on a link to a YouTube video of the honey badger, and kind of implied a few things about it that reminded him of me. He knew deep down I had this killer instinct but I hadn't yet got to that level in Formula One where I'd let it out. I probably hadn't allowed myself to exploit it, because I wasn't at that confidence level yet. But he was like mate this is you, and when people see it I think it's going to be quite a powerful tool for ya," Ricciardo, 31, told Mamamia.

That instinct did go on to become a powerful tool, with Daniel 'the Honey Badger' Ricciardo now one of the biggest names in the sport - with seven wins, 31 podiums and a net worth of $68 million to his name.

In 2020 of course, Ricciardo's had to lean on a different skill - his optimism - as races, tournaments and meets across every sporting code were cancelled due to the coronavirus pandemic.

"I think it's gotten me to this point to be honest. When you're pursuing such a dream as I had as a kid you need to be optimistic. You need to have faith it's going to work, otherwise you're not going to allow yourself to try. It's my personality, and it's also helped me deal with the pressures of the sport, because getting there is one thing but staying there is another."

It makes him the perfect fit for Optus' new campaign 'It starts with yes', with Ricciardo donating his signed 2020 Formula 1® helmet to be won by an avid fan as the company looks to embody the position that every monumental change can be traced back to one simple word - yes.

It's been a year of stillness and quietness for so many of us, and Ricciardo took that reality one step further ditching his high-flying life as an international sport star for wood chopping on his family's WA farm when we were in the depths of restrictions and lockdown.

"I was out on the farm for a few months. I became a bit more well rounded I would say, as a farmer. In saying that I didn't do much....I chopped some wood. I tried to write some lyrics to some instruments that I don't have or can't play. The biggest thing I got out of it was learning to enjoy little things again," he told Mamamia. "Not having so much technology especially out there on the farm, I just enjoyed having conversations and catching up on real things in life instead of having everyone's heads in a phone. Nature was the one thing I really appreciated this year."

Ricciardo fell in love with go-karting at age seven, describing speed as a feeling of freedom and being in total control. With his parent's support, he moved to Europe to pursue racing at the age of just 17.

As an adult, Ricciardo lives a big life. He spends his time hopping between countries, racing in front of huge-crowds of people and looking at his own face peering back at him from the covers of magazines with headlines like: 'Ricciardo joins 'F1' elite' and 'Does Daniel Ricciardo have a girlfriend?' With his professional and private life becoming more and more blurred the more famous he becomes.

Speaking on Dax Shepard’s Armchair Expert podcast recently, Ricciardo spoke about his personal life in a way he rarely has before - subsequently making headlines for 'revealing' his old superstition of abstaining from sex before a race to try to improve his performance.

"I used to, but not anymore," Ricciardo admitted. "I went against my rules obviously once and I was probably even better on Sunday so it’s all good. I threw that one out a few years ago," he told Shepard.

VROOM VROOM Motherf***ers!!! @danielricciardo is hands down the most charismatic driver in Formula 1. He's funny, goofy, and fiercely talented. He also agreed to a liaison with Monica Monsoon in Austin 🔥https://t.co/1Vv8GwtVwj pic.twitter.com/ESoYWoSWFg

He also mused about the prospect of marriage and kids, telling the podcast, "I know some drivers have a wife and kids and I’m like 'how do you do this with a family?' The danger at one side and then just dedicating everything you can to the sport but also dedicating time to your family. I’m not there yet, I don’t know how I could manage that. I’m still in the moment of just trying to get the most out of me and I think what I’m doing is working so I’m going to keep going down that path. I’ll wait a while for kids I think."

As for who he is dating, Ricciardo has kept that pretty under wraps since his breakup with childhood girlfriend Jemma Boskovich in 2016. As he told Mamamia, he didn't spend lockdown with a special someone, he spent it with two of his male colleagues on the family farm where "training and fitness was our routine and escape."

But he's since left the confines of Australia's relative safety to rejoin the kick-started Formula One schedule on the other side of the world, wrapping up in December with the year-ending Abu Dhabi Grand Prix.

A few months ago he had a scare with the virus, as it runs rampant on most other continents, returning an inconclusive COVID-19 test after the Tuscan Grand Prix in September.

"I felt nervous," he told Mamamia. "Because the first thing you've got in your mind is 'I don't want to miss a race.' After that it's 'how?' Like I've been so careful. And it's like, how did I catch it? I wasn't reckless. I was probably better behaved that week than previous weeks. You kind of have those moments of self doubt."

Thankfully the panic didn't last long, and a second test later came back negative. But it did scare him enough to improve his discipline when following COVID-19 health regulations and guidelines.

As Ricciardo told Mamamia, he's tried to - amongst the chaos - "appreciate 2020 for what it is" with his 'half glass full' kind of mindset proving to be somewhat of a superpower in a year that's been so hard to comprehend and digest for most.

"I was able to be home a little longer this year. I was still able to have a job, and a pretty cool one.

"Okay, I missed a few dinners and parties and whatever, but I am still racing, and I am doing what I love. I can't complain about that, it was pretty easy to stay positive through it all," Ricciardo told Mamamia.

Reply
Upvote
Nothing about Dan’s big move next year? I can’t wait to see him, along with Lando, in a McLaren for 2021 🔶👍🔷
user a month ago