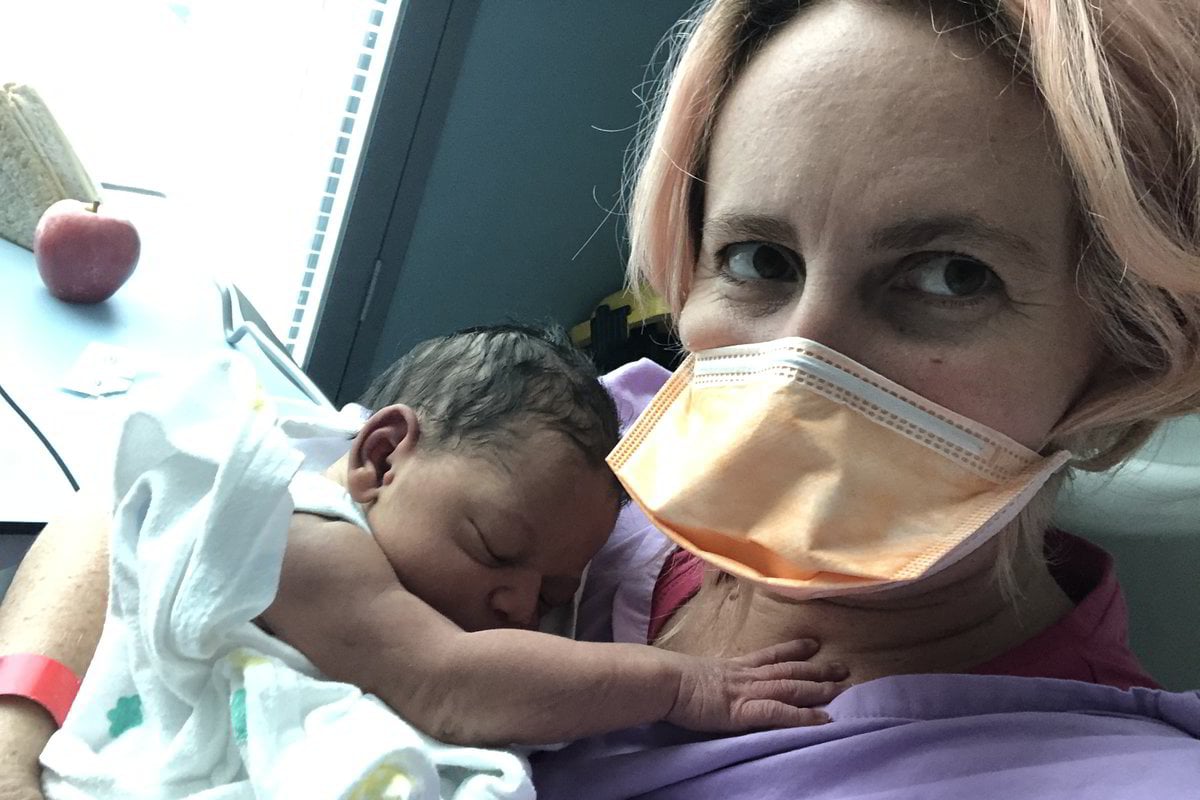 I was the fifteenth case of COVID-19 in Queensland. I contracted the virus while on a trip to the UK for my grandmother’s funeral and unwittingly carried it back home with me, infecting my partner, a transgendered man, who has cystic fibrosis and who was nine months pregnant at the time.

In those early days of the virus all COVID patients were legally required to quarantine in hospital, so my partner and I were held separately, along with our respective four year olds, unable to leave our tiny rooms for nine days.

My partner birthed his baby while in quarantine, making medical history as the first birth to COVID-positive parents outside of China, and the first unassisted COVID birth in the world.

The enforced isolation and lack of mental health support provided while in the hospital had a severe negative impact on our children, and when we were eventually released and allowed to finish our quarantine at home our family started to fall apart.

We were traumatised by the way we had been treated in hospital, but what we weren’t prepared for was the way we’d be treated once we’d been released.

When, after over five weeks I was officially declared negative and my quarantine period came to an end, I ventured back into society feeling like a hero. I’d survived COVID-19 and I wanted to tell the whole world.

I even briefly considered getting a “kiss me, I’m immune” shirt made. I was relieved it was over, that we’d defeated the virus and produced a beautiful baby along the way, and so I was completely unprepared for the hostile reception I received when I finally was able to go back outside.

I live in a small country town in regional Queensland, and word travelled fast that we’d caught COVID.

Hysteria took over our children’s school and we were hounded on social media for details of our situation.

Parents posted awful things about us on Facebook and local members of the community took to the airwaves to speak out against us. It felt like we were being demonised, blamed for something that was absolutely no one’s fault.

When I’d developed a fever a few days after returning back to Australia I’d gone to see my GP, but by the time I saw him my temperature had gone down so he’d assumed I was fine.

I’m not angry at him—COVID was still such a new thing back then and the symptoms are so similar to influenza that it was hard to know when to be alarmed.

Unfortunately, though, this meant that I had spent a week moving about socially in the community while unaware I was contagious. Miraculously the only person I infected was my partner.

People were scared and angry, and we became the scapegoats for their fear.

This fear was also expressed face to face. The first time we took the new baby out to our local shop to buy some nappies an old woman came up to smile at him and pinch his cheeks.

I proudly told her he was the first COVID baby to have been born in Australia and she jumped away as though she’d been stung.

I assured her we were no longer contagious but she shook her head suspiciously and backed away.

This response repeated itself continually from that day on. People we knew avoided us in the street, a builder refused to finish essential work in our home, and a GP physically recoiled when I told her I’d had COVID in an unrelated health appointment.

The principal of our children’s school even strongly suggested that we not return until the following term, long after our contagious period came to an end.

I was left in a vulnerable state with no childcare, while trying to mend my broken family, and the lack of support from the school eventually led me to withdraw our children’s enrolment entirely.

My mental health had begun to deteriorate while I was in the hospital, when the social worker’s response had been to advise me (over the phone, because she didn’t want to come near our room) to turn the television on and tune in to the meditation channel.

My mental health got progressively worse at home. The feeling of not belonging and of not being welcome in your community is a very damaging experience, and for a couple of weeks I became suicidal.

I was even too scared to go to my local town to buy our groceries and started driving further to a bigger town to shop.

When people ask me how we all are now, I never know how to respond. Physically we’ve all fully recovered, but the post-COVID stigma has changed my relationship with my local community, and these experiences will stay with me for a very long time.

I can only hope that by speaking out I can help to inform government and hospital COVID policies to encompass mental as well as physical health, and that as the virus spreads and becomes more commonplace one small positive will be that survivors will not be stigmatised or discriminated against the way that we have been.

B
bookaholic 2 years ago