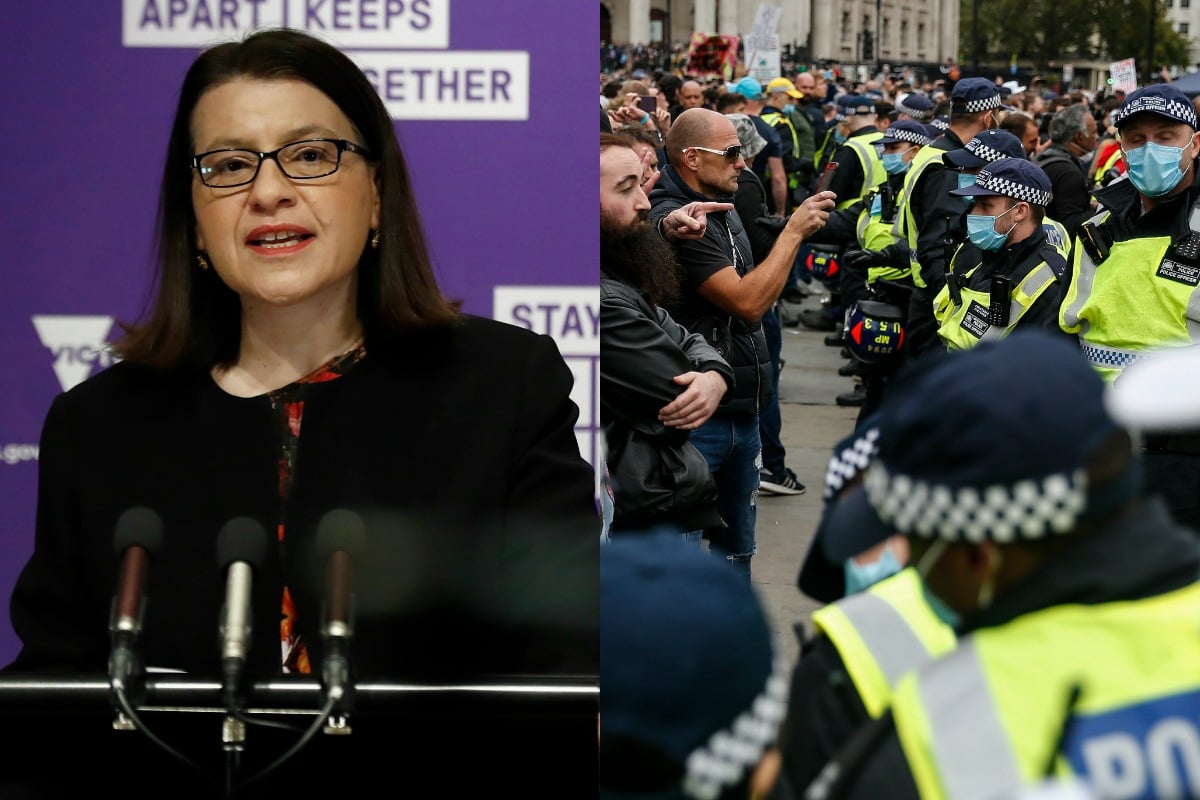 New South Wales has recorded no new cases of COVID-19 for the first time in over three months.

While more than 12,000 tests were conducted in the past 24 hours, the state recoded no new cases on Sunday.

The last time zero cases were recorded in NSW was on June 10.

No new cases of #COVID19 were diagnosed in the 24 hours to 8pm last night, with the total number of cases in NSW remaining at 4,029.

The last time NSW had no new cases in a reporting period was on 10 June. pic.twitter.com/WbZJPPg0ku

On Sunday, Victoria recorded 16 new cases and two deaths in the past 24 hours.

The latest figures bring Melbourne's 14-day average down to 22.1 and regional Victoria's to 0.6.

#COVID19VicData: Yesterday there were 16 new cases & the loss of 2 lives reported. The 14 day rolling average is down & number of cases with unknown source stable as we move toward COVID Normal. Info: https://t.co/eTputEZdhs#COVID19Vic pic.twitter.com/hdGLBeWZST

The news comes as Victorian Premier Daniel Andrews is set to outline Melbourne's move to the second step of the roadmap on Sunday, following better than expected progress in fighting the spread of the virus.

The measures already announced in the second step include the reopening of childcare centres, a staged return to school for students and the easing of restrictions around public gatherings to allow up to five people from a maximum of two households to meet outside.

Victorian Premier Daniel Andrews has responded to the resignation of Health Minister Jenny Mikakos, saying he did not ask the minister to step down but thought it was an "appropriate course of action".

On Saturday, the Premier said he did not speak with Mikakos before she resigned and he had not spoken to her since.

"She sent me a text... I did not speak to her. I have not spoken with her since," he said.

"I believe Jenny's made the right choice, but she made that choice," Andrews added. "I want to thank her for her dedicated service and hard work."

The Premier and key ministers have been in hot water since it emerged that the use of private security guards, instead of police or military, led to breaches causing the state's second COVID-19 wave.

In a statement shared on Twitter on Saturday morning, Ms Mikakos said she was resigning from the cabinet and parliament following the Premier's comments about her and her department's responsibility for the running of hotel quarantine.

"I have never wanted to leave a job unfinished but in light of the Premier's statement to the board of inquiry and the fact that there are elements in it that I strongly disagree with, I believe that I cannot continue to serve in this Cabinet," she wrote.

"I am disappointed that my integrity has sought to be undermined," she added.

Mikakos also apologised for the "situation" Victorians were in and said she did not believe her actions led to them.

When asked on Saturday if he too should quit, Andrews answered "no" and that his government was unified with a "singular focus" to defeat the pandemic.

"I don't run from challenges," he said.

Victorian Minister for Mental Health Martin Foley has since been sworn in to replace Mikakos as Health Minister.

7 new coronavirus cases have been identified on a cargo ship off Western Australia.

Seven crew members on board a ship anchored off Western Australia's northwest coast have tested positive to COVID-19.

The new cases come after two men were taken off the bulk carrier on Friday, which has been anchored off Port Hedland since September 16.

In total, 20 Filipino nationals and the captain were on board the Patricia Oldendorff and it is expected more may still test positive.

The seven new cases have to remain on board as they are part of a skeleton crew of nine to keep the ship operational.

On Saturday, Western Australia Health Minister Roger Cook said their symptoms were minor or non-existent and would be monitored.

The evacuated crew members, including the two positive cases identified on Friday, are in hotel quarantine in Port Hedland.

Mr Cook said the local community should not be concerned as "every safety measure is being put in place".

"These crew do not currently need medical treatment but should it be required, every precaution is in place to protect healthcare workers and members of the public."

Thousands gather for an anti-lockdown protest in London.

Anti-lockdown protesters in London clashed with police officers on Saturday after they tried to break up the demonstration because of a lack of social distancing.

Police said 10 people had been arrested and four officers injured, including two who required hospital treatment.

Carrying banners saying "We Do Not Consent" and "COVID 1984", thousands of people crammed into Trafalgar Square to protest against restrictions to limit the spread of coronavirus. 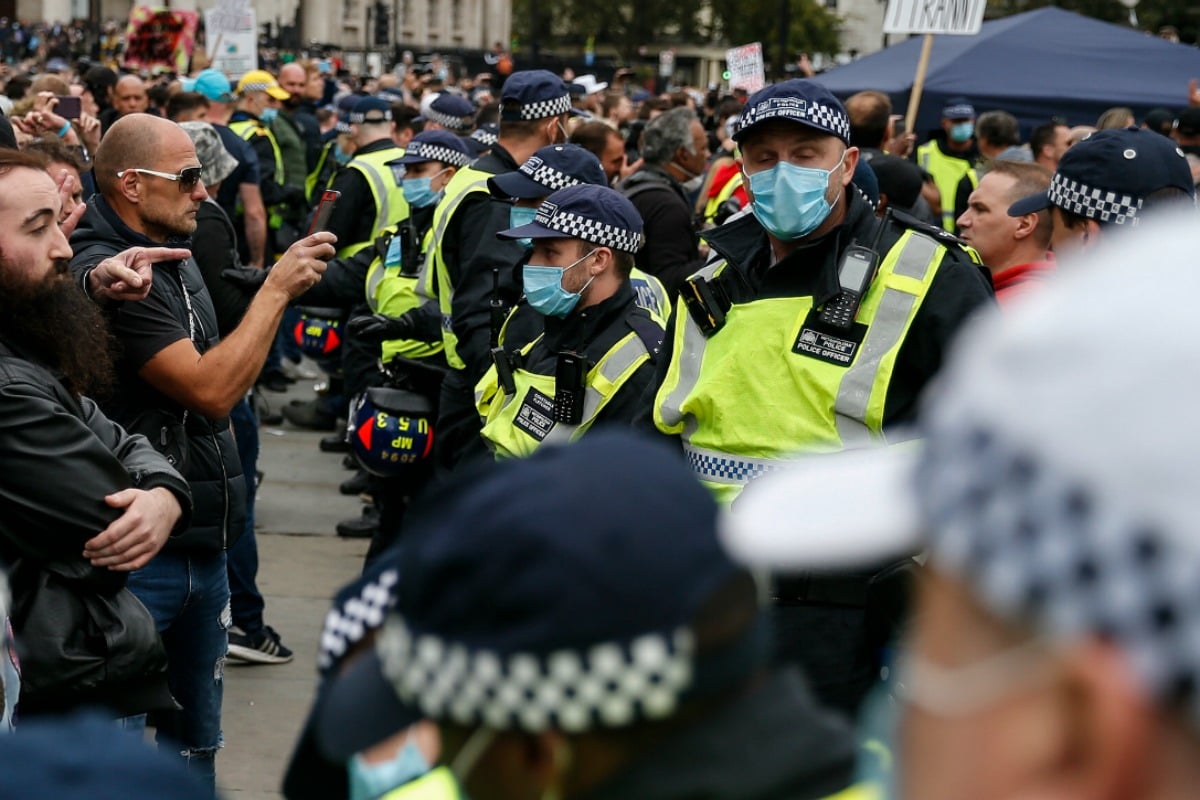 Image: Getty. The police ordered the protest to disperse because demonstrators failed to socially distance or wear masks, meaning it was no longer exempt from national rules that limit gatherings to six people.

"We want to be clear, this protest is no longer exempt from the regulations," the Metropolitan Police said on Twitter.

"We are asking those attending to disperse. Sadly, some officers have been injured while engaging with people."

According to official figures, the United Kingdom recorded 6,042 new cases of COVID-19 on Saturday and 34 new deaths among those who tested positive for the virus within 28 days.