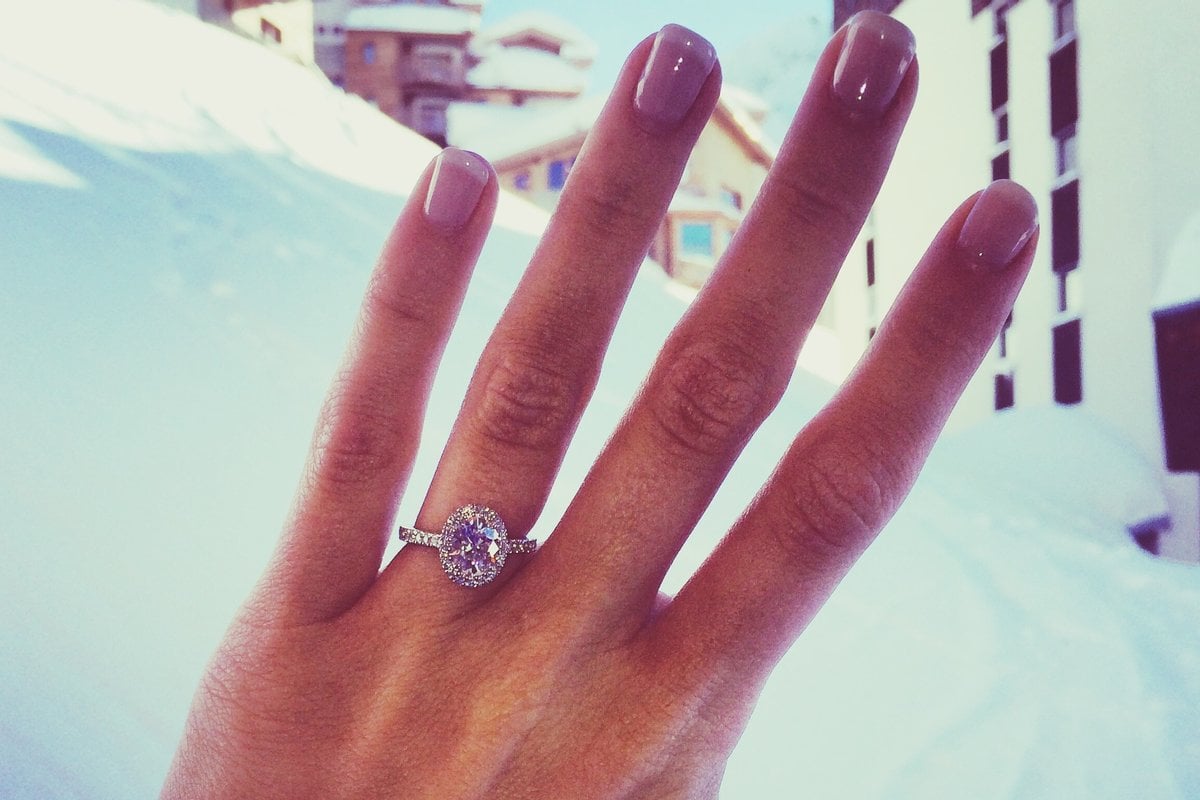 I’ll start by saying I know how petty it sounds, complaining over the fact that someone copied my engagement ring.

Especially when you take a glance back over 2020 and think about the absolute mess of a year (to varying degrees) we’ve all had.

It sounds a little ridiculous but the truth of the matter is, I do feel hurt about it and I can’t shake this little niggling feeling I have about the situation I’ve just found myself in.

Watch: Engagement ring trends through the decades. Post continues below.

So let me backtrack and tell you how I came to be here, sitting at my laptop ferociously typing away in upset.

My partner and I got engaged over a year ago in a wonderful time I like to refer to as ‘pre-COVID’.

On sharing the news with our families, I had a conversation with a soon-to-be relative of mine. We were at my future in laws’ house with their family when the girlfriend of one of my fiancé’s cousins, Katie*, started chatting to me during a moment in the kitchen.

Katie had been dating Tom* for a while, around four or so years, and they had been talking about getting engaged for the last few months.

My fiancé George* and I had only been dating for a year when we got engaged but being at a similar stage, Katie began asking me a lot of questions about engagement ring shopping and exactly what to look for in a ring. You know, the four C's and all of that.

“I love your engagement ring, it’s beautiful,” Katie told me as she picked up my hand and looked at my ring under the kitchen lights. “I want to go for a classic brilliant cut and I’ve tried on a few rings but I’m just doing my research. Can I try your ring on?”

I felt a bit taken aback and didn’t really want Katie to try my ring on.

I can’t pinpoint why, but we’d only met on a few occasions and I didn’t know her all that well. It didn’t feel right for her to be trying on my engagement ring.

So I said I had to go to the bathroom and would be back, hoping she’d forget on my return.

She didn’t and asked me again. “Can I try on your engagement ring?” Katie asked a second time. Still feeling uncomfortable, I obliged.

She put the ring on her finger and then snapped a photo with her phone. I think she could tell by the look on my face that I wasn’t all that impressed, so she insisted this was all part of her ‘research’.

She continued to ask me about the type of setting of my ring, the metal used and details of the cut of the diamond, which was an emerald cut.

My fiancé and I had my engagement ring custom made and it felt really special for us to go through that process together of designing our own ring. I told Katie all about it. What the process involved. What it was like for us.

I told Katie where we went and shared any tips I had after having gone through the process myself.

She showed me some photos of rings she had tried on and they were much simpler and more pared back than my ring. She said she’d visited the jeweller on a few occasions but was still in the process of deciding exactly what she wanted, yet this was the style she was leaning towards.

We had no idea when Tom was planning to propose to Katie and I hadn’t really given it a second thought while trying to plan our own wedding in the midst of 2020.

That was until I got a phone call from Katie out of the blue telling me that Tom had proposed. I was thrilled for her, congratulated her and said we could have a drink at Christmas to celebrate.

When I got off the phone, I thought it was a bit odd that she called me. Like I’ve said, Katie and I aren’t all that close.

Maybe because I had helped her with her ring, she felt the need to tell me, I thought. Tom hadn’t even called George to let him know though, and they’re cousins.

I passed it off as her excitement and told George the news.

A couple of days later, Katie posted some engagement photos on Instagram. They had a professional photographer and the first was of Tom on bended knee, and the second was a closeup of her engagement ring.

I almost felt sick when I saw it. It was identical to mine. Not subtly inspired by. Completely identical down to the last detail.

I felt hurt and cheated. Katie had lied to me, asked me for all of the details of my ring, taken a photo of it and then gone and had the exact same one made. George and I had designed my ring together and now it felt like I had a replica floating around in the world.

I know engagement rings don’t look all that different, but it was the way Katie had gone about the situation that really upset me.

I told George how I felt about it and showed him the photo. He told me not to worry and said I should feel flattered that someone liked my ring enough to go and copy it. That I had it first and not to take it to heart.

Yet now I feel it’s the elephant in the room that neither Katie nor I have acknowledged.

Katie keeps contacting me and asking me for wedding planning advice. Given she’s at the beginning of planning her wedding and George and I will be getting married soon, she wants help from me with the planning process.

I now don’t feel like I want to help her because after the ring situation, I don’t want a copy-cat wedding either.

Again, I know it sounds petty and given Katie is going to soon be a relative of mine, I don’t want to cause problems. We don’t see each other all that often, only at Christmas and Easter and the odd family event.

But I still feel upset about the ring situation even though I’ve convinced myself I can’t bring it up with her. Do I have a right to feel this way, or is a ring just a ring and I should move on and get over it?

The author of this post is known to Mamamia and has chosen to remain anonymous for privacy reasons.

Reply
Upvote
Is it a brilliant cut diamond with a halo and white gold band? If so that’s an exact replica of every engagement ring I’ve seen for the last two years and it would have been surprising if she didn’t end up with one.
In any case it really doesn’t matter, I just feel bad for the guy who has proposed to this slightly strange woman.
J
jeoh a year ago

Reply
Upvote
1 upvotes
Don’t tell her your future baby names.
Don’t show her your dress or tell her the designer or shop.
Don’t tell her any of your suppliers - cake, band, decoration or favours.
Tell her your budget but reduce it significantly so she can say she spent more - and then once she brags you can say, sorry darling you must have misheard, we doesn’t ($20k more than her!!)
petty yes, but I would never trust her again. Ever.
News
General
Opinion
True Crime
Politics
Sport
Explainer
Entertainment
Celebrity
Reality TV
Movies
TV
Books
Rogue
Royal
Lifestyle
Beauty
Fashion
Weddings
Home
Wellness
Health
Fitness
Travel
Food
Parents
Before The Bump
Pregnancy
Baby
Kids
Teens
School
Parent Opinion
Work & Money
Money
Finance
Career
Lady Startup
Relationships
Sex
Dating
Separation
Friendship
Family
Real Life
Couples