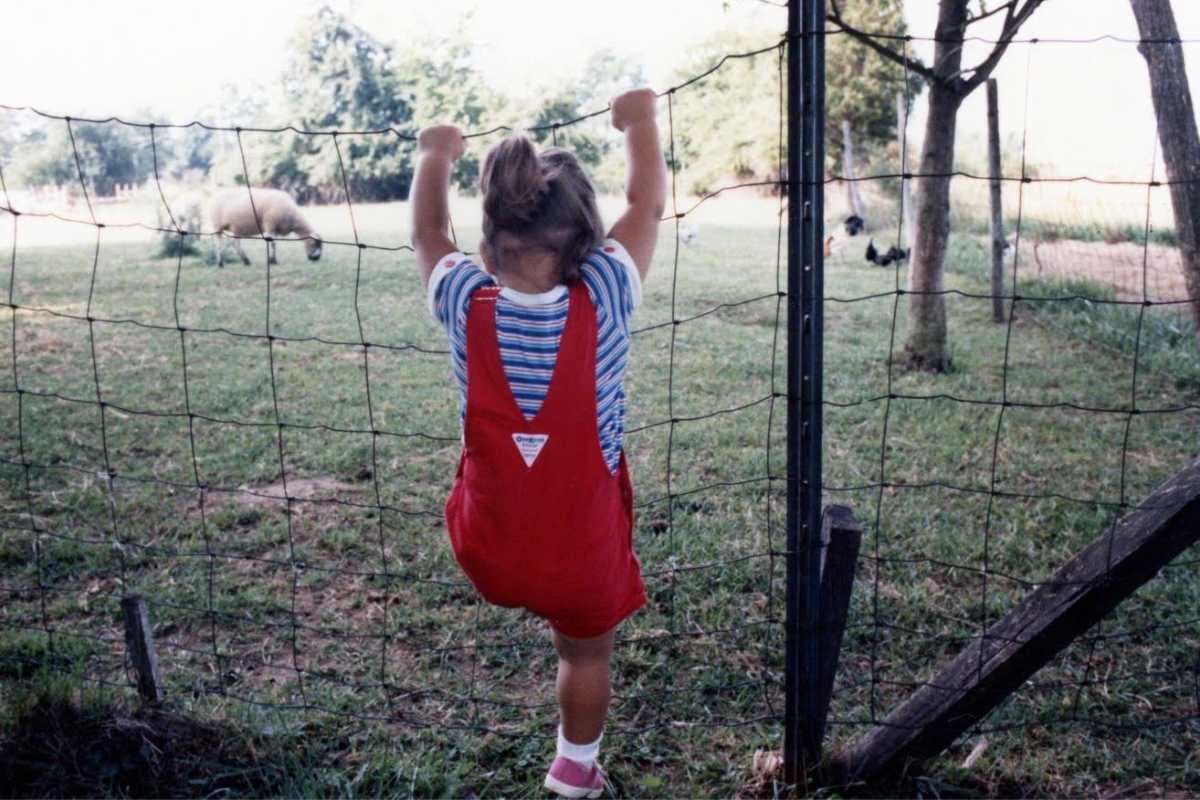 Warning: This article deals with child sexual abuse and may be triggering for some readers.

I had driven to the farmhouse with my father and sister after an invitation from my estranged grandmother. He was dying, she said.

The court case had torn the family apart. I was a freshman in high school when I finally told my grandfather’s secret — my secret, really. That’s what abuse does to a person. It makes the perpetrator’s secrets your own. What should be their shame becomes yours.

Your silence. Your identity. Your fault.

As the turmoil escalated, I did the only thing I knew to do: I ran. At seventeen years old, I ran from the ruins of childhood into the ruins of war. I spent years searching for myself in the camps and chaos of the Middle East and Central Asia.

I wanted to feel alive — or, perhaps, to just feel less dead. To feel something.

Over the course of twenty years, I would recreate myself. I would forge a new identity out of shrapnel and baby bottles and moving boxes.

But my grandfather’s memory stayed with me. It’s a funny thing when you share an experience like that with someone; it’s intimate. In the stillness of solitude, they come back to you.

You wonder what they’re thinking or how they’re doing or if they’re sorry. Even as you grow bolder, you do so both because of and in spite of them.

And so, in one of life’s cruel ironies, you come to value the influence of your abuser.

I didn’t know what to expect as we neared the home my family had shared with my grandparents in the hills of southwest Virginia. I wondered if those farmhouse walls would recognise me after all this time.

Those walls had witnessed so much — so many scenes with so many little girls, always ending with a shower running too long and too hot.

Walking to the white weathered porch in all its disrepair, we were greeted by my aunts and cousins — many of whom had testified against me years prior.

They were deferential and welcoming, escorting us inside the dimly lit dining room. I took a seat across from my ailing grandfather. A flannel plaid shirt hung over his once rugged frame; oxygen flowed through tubes in his nose.

I cleared my throat.

“Do you remember me?”

“You were such a pretty girl,” he replied. “My favourite.”

Over the next two hours, he and I breathed the same air. He wove stories of the war with stories of my adolescence — of stock sales and harvests.

The mistakes he’d made, though “only a few,” he insisted. I asked if he thought much about his faith, to which he responded that he felt “alright with the Lord.” I nodded.

I watched him in the third person, like a movie, while two dozen eyes watched me — all those eyes that had once looked upon me with so much contempt. Shame on me for “rocking the boat,” I was once derided.

When all my questions had been unsatisfactorily answered — the why’s, and how come’s, and what if’s — I stood to leave.

I turned to my father. As if on cue, everyone in the room then stood up and took a hand. My father prayed for a peaceful end to his dad’s life — an eleventh-hour awakening, maybe.

I prayed silently for his death.

Germaine Greer will not be defined by her rape, and she sits down with Mamamia Out Loud co-host, Jessie Stephens to talk about it. Post continues below.

The false promise of redemption

Like most victims of trauma, we pore through these moments in our minds, imagining some confrontation or vindication. What will you say to your rapist? What will you do if he apologises? Will he cry? What if you cry? God, please don’t let me cry.

For all those years of anticipation, however, I didn’t picture it as anticlimactically as it turned out to be. He was kind but unrepentant. Haughty, but charming. Condescending, but conversational. He was exactly as I remembered.

But as we spoke, I realised that I was exactly as I remembered, too: a victim.

It’s insidious, isn’t it? At one point, as he began to cry, I felt an instinct to reassure or extend a hand in comfort. Later, my grandmother changed the subject when he started to describe those “few” mistakes he’d made. It would be “too painful,” she remarked. I let it go.

He stood up to hug me as I left. I shook his hand. I stifled tears. I maintained control. I was measured and monotone. Polite.

And that is exactly how power works.

It’s subtle and comfortable. In all my poise, I followed a well-worn script that had been written for me millennia ago. I believed myself to be the powerful one, able to gracefully return to the scene of the crime and confront the demons of my past. Truth is, I’d never been the powerful one.

If I’m strong, then it’s an indication that I turned out alright. Whatever happened those many years ago must not have been that bad. A misunderstanding, perhaps. If I got emotional, I’d lose credibility. I’d be just another hysterical woman.

If I returned his hug, was I signalling forgiveness? If I didn’t, was I cold and unsympathetic to this dying old man? Either exercising control or losing it, there was no win for me.

Indeed, there’s never a win when victims — myself and so many like me — can’t set the rules. Hell, we don’t even know what game we’re playing.

Yet as hard a pill to swallow as the realisation of my role as victim, I was struck even more profoundly by this pervasive and unrelenting quest for redemption that’s wired into the souls and psyches of each of us. It’s why I chose to oblige his request. Like the presence of power, our collective commitment to redemption is unquestioned — a metanarrative within which we all exist.

Dan McAdams, an acclaimed psychologist at Northwestern University, calls the redemption story the “quintessentially American story about how to live a good life.”

We know it all too well: there’s a protagonist who’s born “special” — maybe a little more grit or a little more morality. They’re exposed early in life to all its unfairness, perhaps a trauma, and then a soul-searching ensues.

This is followed by deliverance and self-acceptance, which leads to a moment of absolution and ultimately a commitment to improving the lives of those around them. It’s the narrative we’ve been told since birth — from the pages of the Old Testament to every Disney movie we watch with our children.

Thus, as we move through our lives, we often come to speak of our own trauma with some familial comfort or nostalgia, as though divinely ordained — a rite of passage to a more fulfilled life.

This master narrative of redemption guides every aspect of our lives, holding fast to the “truth” that either in this lifetime or the next, goodness will prevail; there will be a happy ending.

Another leading authority on the power of story, Jonathan Adler defends the redemption narrative as “unequivocally good for your mental health, bringing our personal narratives into alignment with this much prized cultural narrative and thus cultivating a sense of belonging.”

But he also underscores that “even as it may provide some solace and meaning, sometimes hurt just hurts. Redemption, in all its forms, implies a personal agency that may not objectively be available to all people at all times for historical or structural reasons, like racism and sexism.”

Unfortunately, when that happens — when there isn’t a redemption story — we ostracize the victims who have neither the luxury nor inclination to make lemonade from the pile of lemons they were handed. This is what McAdams calls the “the dark side of redemption:” conform to a happy ending or else.

But here’s the thing: some stories — those stories written on pages soiled with power and sex and “othering” — just don’t have happy endings.

Sometimes, as Adler rightly notes, hurt just hurts. The poet Randall Jarrell said, “Pain comes from the darkness, and we call it wisdom. It is pain.”

And that’s okay. In fact, it has to be okay. It has to be okay to sit in loss and pain without some expectation that we, the victim, have a responsibility to turn the sins of another into our own glorious triumph.

Days after my visit, my father called.

“I’m just wondering,” he said, “ if there was anything I could have said differently to support you.”

He continued, “Y’know, we’re in the middle of this #MeToo moment, and I’m so proud of women for having the courage to speak up. But I’m a white Christian man in my sixties. How can men like me support women like you?”

And so began the more important conversation that I’d been denied for the last two decades — that all women are denied. And who knows, maybe that conversation will bring my father closer to his own redemption story.

As for me? I’m okay not having one. My sister said it best as we closed this chapter of our lives together, “We don’t always need a happy ending; sometimes we just need an ending.”

My eternal gratitude to my family for encouraging me to write my truth — especially my sister, Kim, my brother, Jacob, and my beloved, beloved father.

This post was originally published on Medium and was republished here with full permission For more from Elizabeth Metraux, you can find her on Twitter @Elizabeth_PCP.

Shame on everyone who facilitated this final piece of abuse your grandfather inflicted on you. What a disgusting person,

It's not often I agree with you, but on this I do completely. Some things are unforgivable.