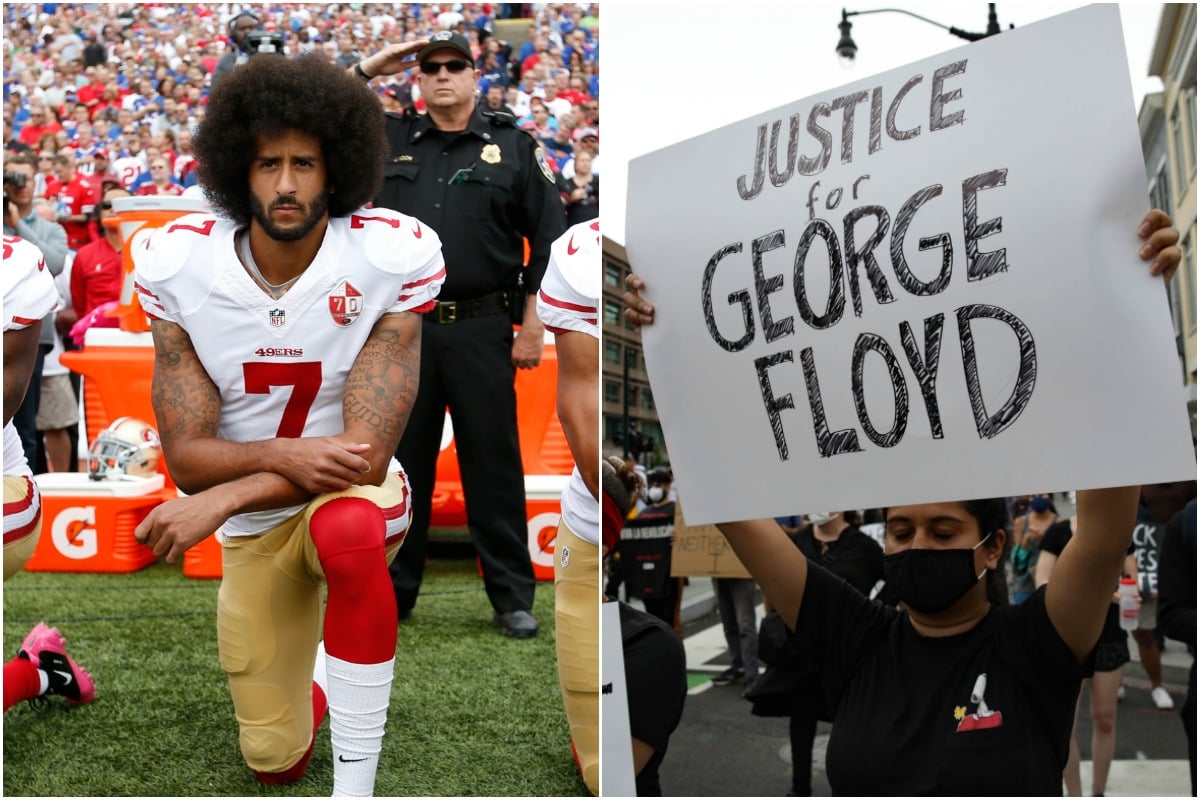 It took three games before he was finally asked what he was doing.

“I am not going to stand up to show pride in a flag for a country that oppresses black people and people of colour,” he told NFL Media. “To me, this is bigger than football and it would be selfish on my part to look the other way. There are bodies in the street and people getting paid leave and getting away with murder.”

He didn't run it past his team, he just did it. He was fed up with police brutality and systemic racism against African Americans in his country.

As news spread of his peaceful protest, so did the controversy. While some of his teammates and then-opponents started to kneel alongside him, critics were quick to label him an 'extremist' in a country that demanded honour of its flag.

The powerful stance ended Kaepernick’s career, and he hasn't played another NFL season since. 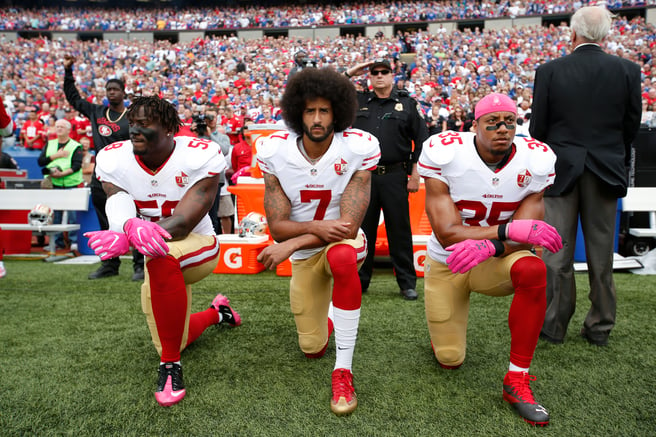 Kaepernick's silent protest was adopted by some of his teammates. Image: Getty.

President Donald Trump helped with that.

He would publicly eviscerate Kaepernick, rallying crowds with shouts of: "You have to stand proudly for the national anthem or you shouldn't be playing" and calling for NFL owners to fire players who dared take a knee.

Later he'd brag that he was responsible for NFL owners not signing Kaepernick ever again, because teams "feared a public rebuke from him".

Fast-forward four years, and Trump is now the President of a country in revolt against the very same issues Kaepernick silently, and peacefully, took a stand against. But this time the President's racist rhetoric in response to those protests are only fuelling the anger.

President Trump says he didn't know where the term "when the looting starts, the shooting starts."

It originates from a Miami police chief whose aggressive policies in black neighborhoods led to violence in the late 1960s.https://t.co/QoVGt6ce5Y

America is into its eighth day of protests, after the death of an unarmed black man at the hands of police.

George Floyd's last words "I can't breathe" came while a white police officer knelt on this neck for nearly nine minutes, after he was arrested for allegedly using a counterfeit $20 note.

It seems now the world is ready to listen.

Even the NFL is showing their support.

The irony being, Kaepernick's same protest four years ago made him "bad for business" and pushed him out of the sport for good.

"That symbol of racial injustice was reinforced every day that Colin sat on the outside of the football world. It may have seemed like a good business decision for the clubs to not sign him, and it certainly wasn't illegal, but it was wrong," wrote a former NRL executive for CNN over the weekend.

The protests have spread around the globe, and they aren't slowing down any time soon. Here in Australia, it's sparked a resurgence in conversation around our own national shame - the 400 deaths of Aboriginal Australians in custody, even after two royal commissions into the issue.

"When civility leads to death, revolting is the only logical reaction. The cries for peace will rain down, and when they do, they will land on deaf ears, because your violence has brought this resistance. We have the right to fight back," wrote Kaepernick on Twitter last month, as he watched thousands echo his words.

When civility leads to death, revolting is the only logical reaction.

The cries for peace will rain down, and when they do, they will land on deaf ears, because your violence has brought this resistance.

We have the right to fight back!

Kaepernick's protest was peaceful, and it didn't make a difference.

Perhaps a louder one will finally get the message across that things need to change.

If you have the means to do so, you can actively help the Black Lives Matter cause in Australia and the United States by donating to organisations working towards racial justice. A couple of options include the National Aboriginal and Torres Straight Islander Women’s Alliance, an organisation that empowers and advocates for Aboriginal and Torres Strait Islander women, and the Justice for David Dungay fund to support the family of David Dungay Junior, an Aboriginal man who died in a Sydney jail. You can also donate to the Black Lives Matter Global Network here. If you can, consider regularly donating to Indigenous-run organisations and First Nations causes.Other active ways to help include signing petitions, attending peaceful protests, listening to BIPOC, raising their voices, educating yourself on racism and privilege and ensuring we are all taking part in the conversation to dismantle systemic racism.