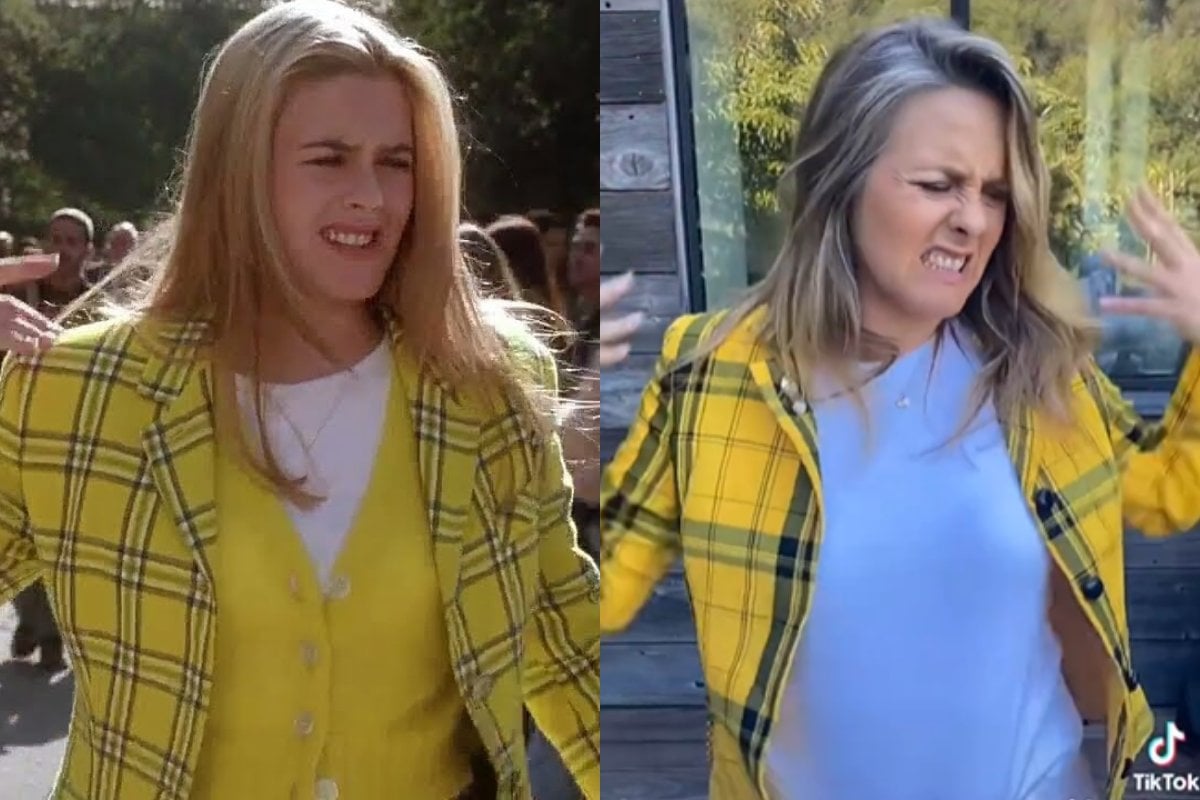 If you're a child of the '80s or '90s, there's a good chance you would have watched (and re-watched and re-watched) the cult classic teen movie Clueless.

The 1995 film introduced us to the power of matchmaking, a bunch of ridiculous slang, and made us wish we all had a rotating wardrobe.

In case you need a refresher, Clueless follows the story of wealthy high school student Cher (Alicia Silverstone) and her best friend Dionne (Stacey Dash) who become matchmakers for two of their teachers and give new girl Tai (Brittany Murphy) a makeover.

Now, 26 years on from the film's release, Silverstone says she still gets recognised for her iconic role.

"I’m always amazed at the longevity of Clueless. It's incredible that so many people love this film and not only continue to love it but continue to rediscover it," she told Vogue last year.

"I'm sure I don't look the same but little kids will still come up to me asking 'Are you Cher?' So many mums who were my age when it came out are so excited to show it to their sons and daughters now."

Just last week, the 44-year-old took to TikTok to recreate an iconic scene from the film (with the help of her son).

So, like Silverstone, we decided to take a trip down memory lane.

Here are 15 things you probably didn't know about Clueless.

1. Silverstone landed the role of Cher because of her performance in an Aerosmith music video.

We couldn't imagine Clueless without Alicia Silverstone and it turns out her performance in Aerosmith's 'Crazy' music video helped her land the role.

Speaking to Interview Magazine, the film's writer and director, Amy Heckerling, explained that she had her eye on the actress after seeing her in the video.

"Her performance in the video - I believed everything. I just went crazy for her. So when I handed the script in, by that time the 'Crazy' video was out and I videotaped it. I gave it to the studio and said, 'Think of this girl when you read it,' and they said 'Oh, Liv Tyler?' And I went, 'No!'" she told the publication.

"Meanwhile, my friend, the casting director, was saying 'You've got to see the girl in 'The Crush.' Well, it's the same girl."

2. Cher's mispronunciation of "Haitians" was real. 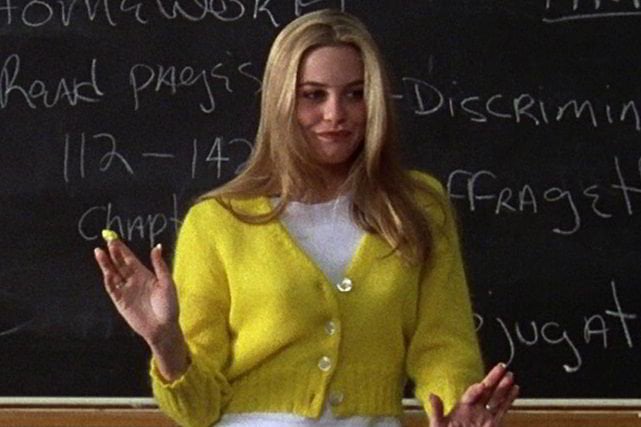 During the film's iconic debate scene, Cher mispronounces Haitians as "Hat-ee-ans". But the mistake wasn't part of the script and was simply an error made by Silverstone.

"It wasn't written that way in the script, but that's how [Silverstone] said it," Heckerling told Vice in 2016.

"Everybody started to run towards her to correct her and I had to kind of block them all, like 'step away from the actress!' I didn't want her to act; I just wanted her to feel that confidence."

3. The film was based on a Jane Austen novel.

Although they might seem like two very different stories, Jane Austen's classic 1815 novel Emma was the inspiration behind Clueless.

"I remembered reading Emma in college and being struck at how much it reminded me of old TV shows like Gidget," Heckerling told Entertainment Weekly. "There's something so basic about it."

4. The mugging scene was based on a true story. 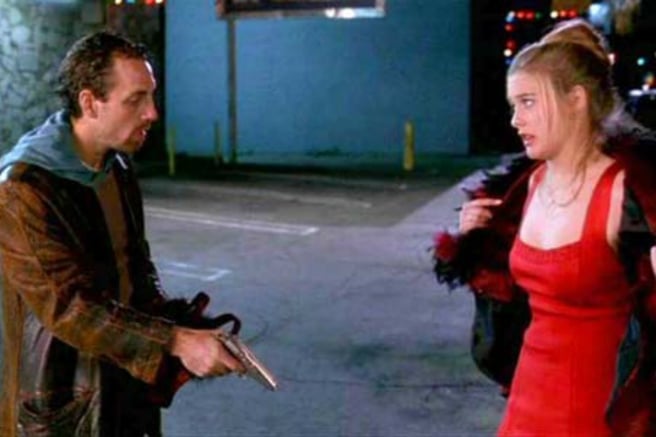 During the film's unforgettable mugging scene, Cher famously says "You don't understand. This is an Alaïa!" when she's told to get on the ground.

According to Heckerling, this scene is based on a true story she heard at a dinner party about a man whose wife made him wear designer suits.

"He got held up, and the mugger said, 'Get on the ground!' He said, 'But this is Armani!' It wasn't like he loves Armani, it was more like he was more afraid of his wife than a guy with a gun," Heckerling told Interview Magazine.

"I thought that was so hilarious!"

5. The "suck and blow" party game wasn't as easy as it looked on screen.

During the film, Cher and her friends play a party game called "suck and blow", where they have to pass a credit card to each other without dropping it from their mouths.

But in reality, the game wasn't as easy as it looked on screen. Cast members had a hard time trying to keep the credit card from dropping, so a prop card made from cardboard was later brought in. When that didn't work, the cast reportedly applied thick layers of lip balm to help the card stick to their lips.

6. Reese Witherspoon and Sarah Michelle Gellar could have played Cher.

It turns out Sarah Michelle Gellar was offered the role of Cher but had to turn it down because of scheduling conflicts with TV series, All My Children.

Reese Witherspoon was also considered for the role as she already had a few film credits to her name such as The Man in The Moon, A Far Off Place, and Jack The Bear. But in the end, Silverstone was the right fit.

7. Silverstone and Meyer both attended the high school which inspired the film.

Silverstone and Breckin Meyer (who played Travis) both attended Beverly Hills High, which was the inspiration behind Bronson Alcott High. Heckerling even audited classes at the high school to make sure her script was authentic.

8. Mr Hall was based on a real teacher.

Speaking of Beverly Hills High, Mr Hall was based on a real debate teacher who worked at the high school at the time. Hall was a friend of Heckerling and even appeared in the film as the school principal.

9. The line "You're a virgin who can't drive" was based on the director's life.

"You're a virgin who can't drive" was one of the most memorable lines from the film. But the insult was actually based on Heckerling's life.

"'You're a virgin who can't drive.' Well, that was me! For a very long time." Heckerling told Vice."You take the thing that embarrassed you most, and you use it." 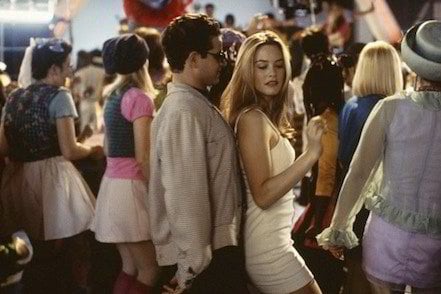 Cher's outfits were the envy of many of us watching the film.

So much so that Calvin Klein ended up bringing back her iconic white dress in 2010, after a request was made by Ilaria Urbinati, the co-owner of the LA-based label Confederacy.

11. Cher had 63 outfit changes throughout the film.

Speaking of Cher's outfits, it turns out she had 63 wardrobe changes in the movie.

In the book As If!: The Oral History of Clueless, costume designer Mona May said she only had $200,000 to spend on the entire clothing for the film. 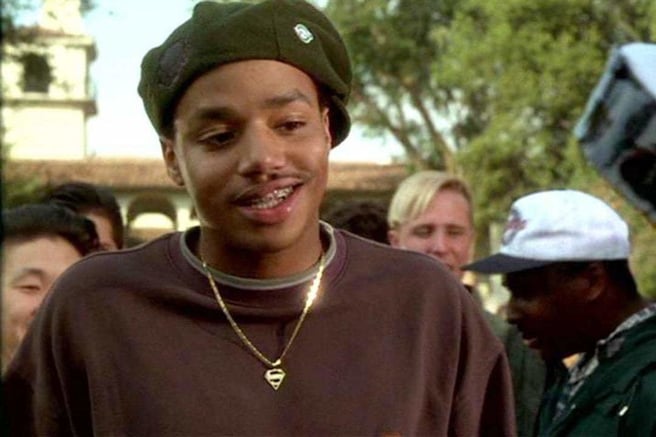 It turns out there was a reason Donald Faison, who played Murray, wore braces in the film.

"They were trying to hide my small teeth!” Faison told his Scrubs co-star Zach Braff on their Fake Doctors, Real Friends podcast earlier this year.

"I never knew,” Braff responded, "that your braces in Clueless were because of your f**ked-up Chiclet teeth!"

And that wasn't the only thing they had to change about his character's appearance.

"They shaved my head in Clueless," Faison said, "because my hair was receding at 18."

This was also the reason his character frequently wore hats.

At the time of filming, Stacey Dash was the oldest cast member aside from the adults. The actress was 27 years old when she played high school student Dionne.

14. A bunch of slang words were made up for the film.

Clueless is known for its now famous one-liners. But a lot of the slang words used in the film were made up by Heckerling, including the terms "Betty" and "Baldwin".

"'Betty' was based on Betty Rubble, who was very pretty," Heckerling told Entertainment Weekly. "And 'Barney' is like, How did he get her?"

Other words came from different groups in the community.

The cast also had a hard time understanding the words themselves.

"I had no idea what the hell I was saying. What the f*ck is a 'Monet'? What’s 'going postal' mean? And when they explained to me what it meant, I thought, 'That’s really messed up!'” Faison said.

15. Paul Rudd wears a KU baseball cap as a nod to his old university. 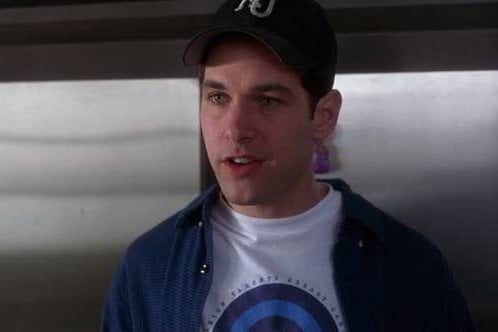 In a few of the scenes Paul Rudd, who plays Josh, is seen wearing a KU baseball cap. This is actually a nod to his old university, the University of Kansas.

What fact surprised you the most about Clueless? Let us know in the comments below.