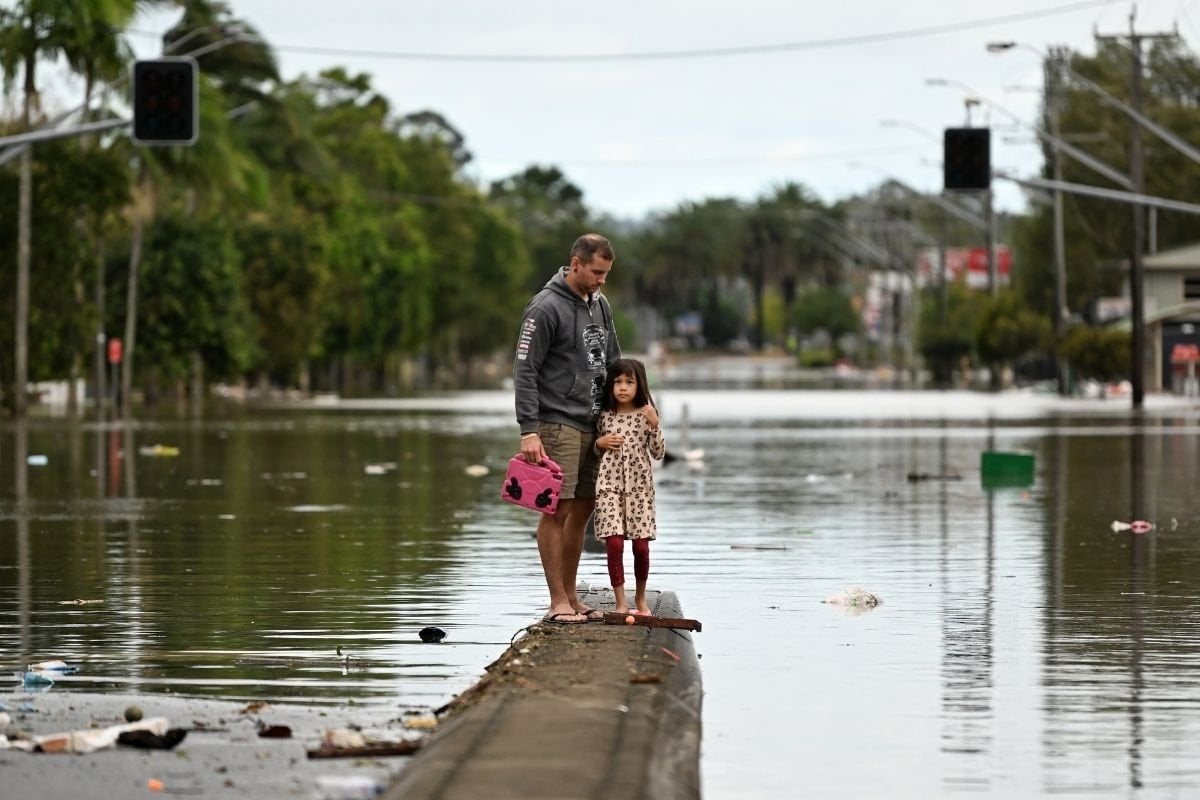 It's been a big week of budget talk.

Both the Coalition and Labor have been forced to show us their hand with an election mere weeks away.

And climate change simply wasn't a priority this week.

Writing for The Conversation, Professor of Economics at the University of Canberra, Steven Bartos, did a little math for us.

In Josh Frydenberg's budget speech, the words 'climate change' were mentioned once. Anthony Albanese mentioned them five times in the budget reply.

But as Bartos pointed out, neither side of politics has an explicit position on the links between climate change and natural disasters. So the correlation with the current flooding just sits like a big elephant in the room that is budget week.

Climate Councillor and leading economist Nicki Hutley calculated that just 0.3 per cent of total government expenditure for 2021-2024 has been committed to climate change initiatives - and most of that was committed prior to the budget, as was reported by the Climate Council. We know spending will drop from two billion this year to $1.3 billion in 2025-6. It's simply not a priority.

Albanese pledged to "end the climate wars" citing his Powering Australia plan to drive investment in cheap, renewable energy. Labor's climate policy has been touted as at least "putting Australia in the race." But on Thursday evening, it was by no means the main driver of Albanese's speech. He didn't use it as the point of difference he could have.

This is where I pause and scratch my head. Because there appears to be a disconnect.

This week entire towns were being swallowed whole by never-ending rain for the second time in a month. Climate scientists have warned that this kind of devastation will only increase as global warming takes hold.

We have polled more than 4000 members of the Mamamia audience in recent weeks, and a whopping 68.7 per cent nominated action on climate change as one of the top five issues deciding their vote at the polls.

To give you a comparison, cost of living was the next most clicked on issue, among 50.8 per cent of people.

Climate change is leading by a long shot, and that's not just our audience. It's front of mind right now - people are marching at Kirribilli House with sodden belongings from the Lismore floods. They're signing petitions, attending protests and being very loud about this issue.

So why are our politicians largely ignoring that in budget week?

I asked this of political expert and host of Democracy Sausage, Mark Kenny, the morning after the government's budget was handed down.

"I know a lot of people talk about climate change as a front of mind issue, and so it ought to be. But the history of elections in Australia is that even when people rate it as a strong issue, it hasn't historically ended up showing up in the way people vote," he said.

His point was, people like to say they care. And they do care. But that doesn't mean they vote for it when push comes to shove. Because at the end of the day paying the electricity bill, or having a bit of leftover money for a well-earned holiday thanks to a tax cut, or not having to stress about filling up at the bowser are the things affecting the majority of Australians right now. Even though they'd like to - in an ideal world - vote with their children's futures in mind, they simply can't afford too.

LISTEN: To Mark on The Quicky. Post continues after podcast.

And it seems our politicians apparently already have that worked out.

"We saw in 2019 when Labor had a more ambitious 2030 target towards net zero emissions, this was used by the Coalition relentlessly to hammer the idea that electricity prices would go up and energy costs would go up and that this was ideological and would result in lower growth and less jobs. Those kinds of issues then became the main concern, and I think you had a number of people who would say they cared about climate change....but that didn't mean they voted for policies that addressed climate change as we might think they should," said Kenny.

And now, as a result, we have both parties presenting budgets that barely mention climate change.

It's sad really, because what's the answer?

Sacrificing money now for future generations is all so hypothetical. And at the end of the day we're selfish. We have to be - we're the ones trying to buy houses, put food on the table, provide for our families.

But if we want to dig Australia out of the embarrassing hole that is our lack of real progress in this space, we have to be presented with a budget that allows us to do both - live now, and look after our futures.

That's not on us.

Reply
Upvote
Why would Labor put climate change front and centre? They started trying to do meaningful climate change mitigation in 2007, and he Coalition have turned it into a political disadvantage at every turn. They ran relentless ads terrifying Queenslanders about the loss of mining jobs in 2019, which was a major factor in the Labor loss.

For anyone who actually cares about climate change, theres no doubt that voting Labor (probably via the Greens) is the only thing to do- the LNP literally have the worst climate change policies in the world. Labor wont win votes by campaigning on it, they already have those ones in the bag. They need to win over the swing voters in the middle, who are far more interested in their person interests than global ones. Thats why aged care is a sensible centre piece, it can end up affecting anyone.
News
General
Opinion
True Crime
Politics
Sport
Explainer
Entertainment
Celebrity
Reality TV
Movies
TV
Books
Rogue
Royal
Lifestyle
Beauty
Fashion
Weddings
Home
Wellness
Health
Fitness
Travel
Food
Family
Before The Bump
Pregnancy
Baby
Kids
Teens
School
Parent Opinion
Work & Money
Money
Finance
Career
Lady Startup
Relationships
Sex
Dating
Separation
Friendship
Family
Real Life
Couples