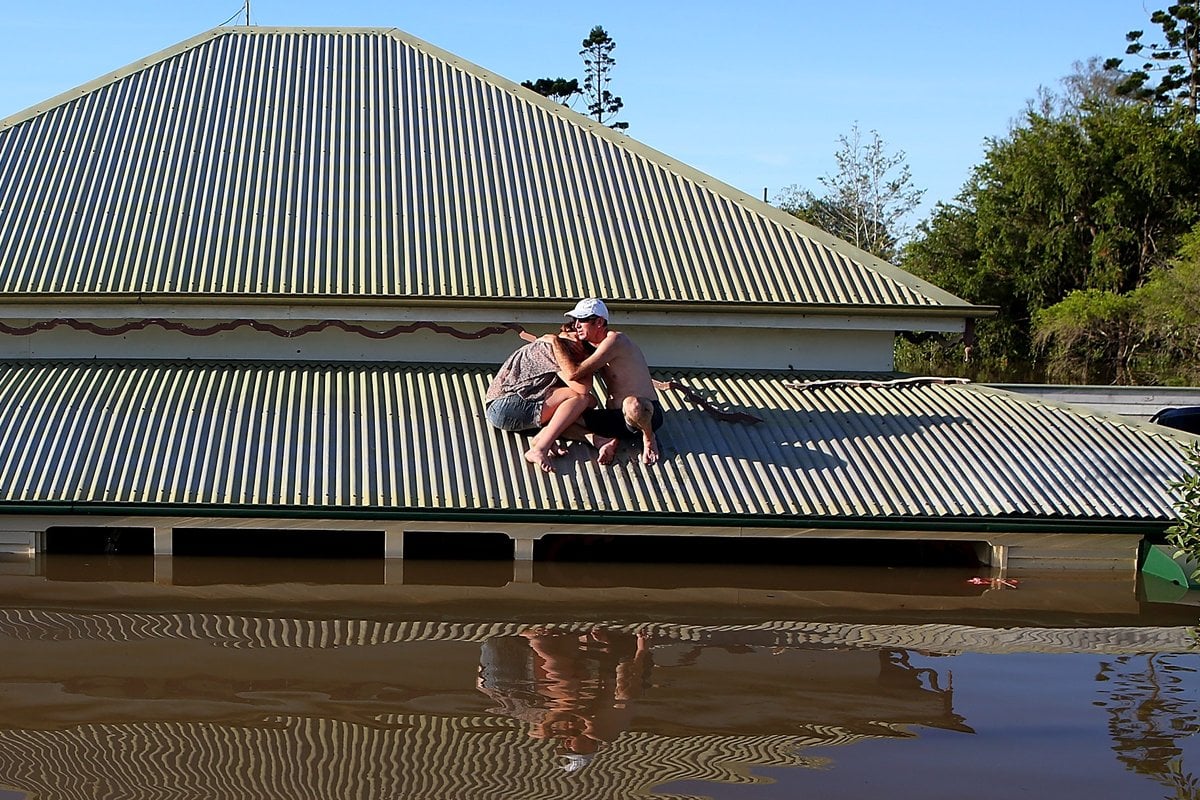 This week, the news was so dominated by reports of unprecedented, deadly floods, that we hardly heard a word about a new climate change report.

That’s the irony of a climate emergency.

Who has time to talk about something as hypothetical as climate change when we are in the midst of a natural disaster?

At least 15 people are dead. Half a million Australians were, over the last week, either evacuated or told to prepare to. Towns are underwater, reeling from the shock of experiencing a "one-in-1000-year event". The 2011 floods in Queensland's Lockyer Valley were said at the time to be a "one-in-2000-year" event. Then came another flood. And another. All in less than 11 years.

This is all while some Australians are still living in caravans, unable to rebuild from the unprecedented bushfires of 2019 that decimated entire communities.

It was during those fires that our own government said, over and over again, now is not the time to talk about climate change.

It’s not like in 2007, the United Nations Intergovernment Panel on Climate Change (IPCC) foresaw such a catastrophe.

They concluded that "the impacts [of climate change] will very likely increase due to increased frequencies and intensities of some extreme weather events".

The report, the largest and most detailed summary of climate change ever undertaken, also found that "unmitigated climate change would, in the long term, be likely to exceed the capacity of natural, managed and human systems to adapt".

Simply, they warned, climate change would lead to extreme weather events, making much of the planet unliveable.

But what does that have to do with Australians cutting holes in the roofs of their houses to escape rising floodwaters, shivering while they wait for an overloaded SES to rescue them?

Or thousands of Australians fleeing from their homes on the eve of 2019 under blood-red skies, as bushfires raced down the coastline?

Or a drought that not long ago gripped 97 per cent of NSW, meaning farmers watched as their stock starved, water scarcity threatening their family?

It sounds as though we are living in that imagined future.

On Friday, the head of the government's National Recovery and Resilience Agency Shane Stone suggested that Australians who live in flood-prone areas should "face realities" and move.

"You’ve got people who want to live among the gum trees — what do you think is going to happen? Their house falls in the river, and they say it’s the government’s fault," Stone told the Herald.

If that river didn't exist 15 years ago and is the result of a climate emergency our government chose to ignore - I'd say that's absolutely the government's fault.

This is a man appointed by the Australian government, failing to acknowledge that "flood-prone areas" have expanded due to climate change, and there are significant logistical and economic reasons why vulnerable Australians can't relocate.

Of all developed nations, Australia has been identified as one of the most vulnerable to climate change.

What we are seeing is a state of climate emergency.

Antonio Guterres, the United Nations secretary general, described the new climate change report issued by IPCC as "an atlas of human suffering and a damning indictment of failed climate leadership".

Professor Leslie Hughes addressed media this week, explaining that climate change is "right here, it's right now and our earth is heading towards catastrophic warming of two degrees".

Despite the urgent messaging from scientists all around the world, Australia remains one of the world's biggest carbon emitters per capita. This fact remains, even while smoke fills our cities, water floods our towns, and drought destroys our crops.

And yet this week, Nationals Senator Bridget McKenzie said, "Nobody could have predicted this weather event".

What is most devastating to the Australians who this week lost so much, is that these weather events were predicted. And successive Australian governments simply ignored the warnings.

We gasp. Some will donate, others will generously give their time. There will be talk of one off disaster payments. Politicians will say the right things. And we will put a bandaid over an open wound.

This is an election year.

Australia is not on the cusp of a climate emergency.

We are living in one.

Reply
Upvote
1 upvotes
Ummm, haven't you experienced the ire of Andrew Bolt's supporters once? Are you actually coming back for more?
C
cat 4 months ago

Reply
Upvote
4 upvotes
@simple simon the ire of Bolt supporters is how you know you're on the right track.
L
laura__palmer 4 months ago

Reply
Upvote
3 upvotes
@simple simon who cares what they think? Better to keep on promoting truth than be silenced by the ignorant,
S
simple simon 4 months ago

Reply
Upvote
1 upvotes
@cat or even the left track.
S
salemsaberhagen 4 months ago

Reply
Upvote
2 upvotes
@simple simon That is a very ..... random comment. What would make you even think of Andrew Bolt? And who cares what he and his immoral and ignorant supporters think?  Why would you even think to mention him? ???